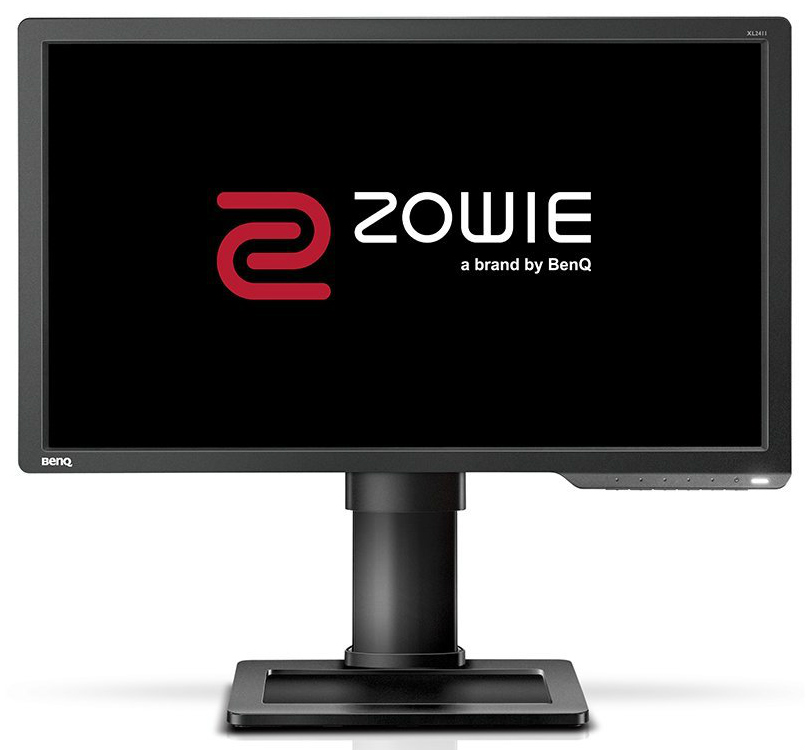 If you’re not familiar with BenQ’s line of products, you might’ve very easily overlooked most of them when drifting through your tech shop’s aisles. And no one blames you, most of their products are relatively tame, compared to the pieces fronted by Asus, Acer and the like. But in their quest to play catch-up and be relevant in one of the largest growing peripheral markets in the world, BenQ’s thrown down 110% and swooped in to take the gaming market by storm with Zowie. Zowie is BenQ’s line of pro-league gaming spec monitors that don’t differentiate between PC gamers or console gamers, balancing features and not vying one out for the other. The BenQ Zowie XL2411 comes packed to the brim with features that some might call excessive, but as others might argue: you can never have too much. But how well does this 24”, 1080 FHD @ 144hz monitor stand up against the competition, which happens to be Acer’s PC focused and accomplished pro-spec XB241H? 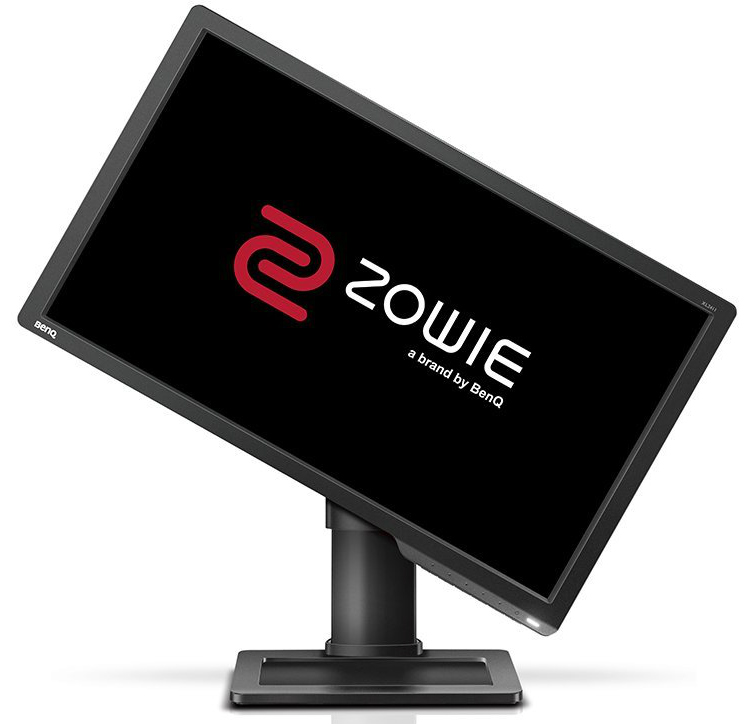 At being almost skeletal regarding accents, the XL2411 is conservative when it comes to cashing in on that near extremist “gaming” design we’d notice on other pro-spec gaming monitors. A rather modest, lightweight, matte plastic case is all that frames the display, and although it has its appeal, it’s rather obvious that BenQ is going for an all performance aesthetic. They do manage to sneak in a few design cues here and there that keep things lively, though. One of those mentioned ques happens to be a smoothly protruding bar at the right bottom lip of the monitor that holds an arrayed group of touch sensors that occupy space that would normally be reserved for physical buttons. I do have one problem with this bar, though; the power button has a little light on it, and it can get quite distracting when using the monitor in the dark. All that matte, non-reflective, “anti-distraction” frame is rendered pretty much useless by this.  The XL2411 is presented as a competitive grade monitor, and as such, BenQ decided that pushing performance over aesthetics might help them secure a place as the customary representation of budget competition spec monitors on the market, and as such, the frame doesn’t look terribly bad, but it isn’t anything spectacular either.

The stand is where most of all that artistic effort was invested, as it’s plain to see. With a sturdy base and a solid neck, it serves its purpose well, made to keep the display still, even if you’re banging away at a keyboard just under it. The modulated look works to its advantage and gives the whole monitor a respectable portrait to show off. The stand comes mounted to the back of the monitor through a VESA compatible bracket, out of the box, giving it a bit of potential with customization while still keeping setup pretty simple. The only part that needs to be attached is the stand plate which pops on to the bottom. The monitor also has a great set of orientation options, much like the 24” XB1. You can rotate, swivel, elevate and tilt it with just a few actions. Making the adjustment is pretty effortless and intuitive and can be done with just a single hand.

The XL2411 comes with the usual lineup of display connector ports but swaps out the DisplayPort for a Dual DVI one. It comes with an HDMI and a D-sub, which makes it compatible with most graphics cards and motherboards out there. The ports also sit in a quiet and out-of-the-way ledge under the back of the monitor, making it a little easier on cable management. There’s also an included audio output jack on the side of the monitor, placed within easy reach. Explaining the slim build of the display is the lack of speakers, but that isn’t really a problem to most people, who use external audio solutions anyways.

Running at a frequency of 144hz, the 1920×1080 display is more than adequate for an incredibly smooth gameplay experience, with a feature list that’ll be utilized to its fullest with FPS titles. A 1ms response time ensures that you see every single update with that 144fps potential and spot every sly movement, be it from shadows, gunfire or even the oddly lobbed grenade. You also get an incredible amount of responsiveness, making good use every bit of your hardware’s power to get you the best possible responsiveness that it can hand out.

The XL2411 also comes with support for 16.7 million colors per subpixel, giving you a pretty decent range of setup to choose from. With these monitors, sRGB usually tends to work best, but you can experiment quite a bit to find one that works for you, as the way we see the light tends to vary quite a bit and every GPU seems to have a different idea as to what the color orange really is.

There’s a motion blur canceling AMA feature that you might have to take into account when choosing colors, though, so if you’re going to use it, you’ll want to turn the feature on before making adjustments as it can slightly darken and alter the look of the image when active.

There’s also another large downside to the XL2411 and BenQ’s seemed to have shot themselves in the foot with it. The screen brags anti-flicker technology, which works well for the most part, but only when the brightness is at a reasonably high range. Setting the brightness too low brings back a sense of flicker and can mess with your head after several hours of use. Coupled with that power button light, this monitor is not going to be your friend if you like gaming into the late hours with no light and are a bit of a nocturnal soul. Or if you’re a cave-dwelling troll. I happen to be both so that I might be a bit biased. You might not notice it as much as I do, if you game in healthy lighting conditions, so it might not even bother you at all.

Another interesting feature that’s left hanging on the scales is the ‘Black eQualizer’ feature. Odd punctuation aside, the feature feels like a godsend when you’re playing competitive matches against folks who enjoy being on the sneakier side of the spectrum, but sometimes, it can feel very uncomfortable when it gets triggered unnecessarily. What the Black eQualizer feature does is adjust the contrast on the darker parts of the images on the fly and makes them brighter so you can get a good view of whatever happens to be hiding in there, which works out splendidly when it works as intended. With it enabled, you see a lot more than you normally would. A lot of the smaller details stand out, and it makes it pleasantly easy to spot movement in corners or more cramped spaces. The downside to this though is that it can really kill any immersion or atmosphere, and to disable or adjust the aggressiveness, you’ve got to go through the firmware menu on those fidgety little touch controls that are embedded in the control bar. Even with the shortcomings, the feature is incredibly useful and really does give you an advantage, almost to the point where it feels like you’re cheating (but you’re not… err… not technically, anyways). The contrast by default is at a pretty good 1000:1, but with Black eQualizer enabled, it tends to switch around as it goes along.

The XL2411 takes a bit of configuration to get it looking good out of the box, and BenQ’s taken this into account and has an alternative for those of us who prefer just to jump right into games. The monitor comes with several different presets for different game genres and lets you assign these presets to hotkeys to make for quick switches. By going through the presets, you’ll find some that really work very well with color and some that work better with contrast. There doesn’t seem to be a single one that does it all, unfortunately, but the quick switching hotkeys help out a ton when you want to switch on the fly. I find that the hotkeys are much better than navigating the menu, honestly, but laziness does play a part in that, I’ll admit.

The BenQ Zowie XL2411 is quite the piece of hardware. It’s set its own goals and gone about accomplishing them pretty respectfully. A few downsides here and there keep it from going above and beyond. Having it stepping on its own toes can be worked around by using it in a very specific way, but not everyone is game for the effort required. But with one goal in mind and that goal being gaming, this monitor is very much on point. With surprisingly aggressive pricing, the XL2411 goes for $299 but can be found at lower prices, with a little bit of digging. The monitor compares very heavily to the Acer Predator XB1 24” FHD monitor but lacks just the Nvidia G-Sync capability and the higher refresh rate. The Acer also costs a good $100 more, though. If you feel that a dedicated g-Sync module and 180hz would suit you better, the predator would be a good choice, but if you were looking for a sweet gaming monitor at a budget price, that would play well with budget graphics cards, then the BenQ Zowie XL2411 is almost perfect for what it is.

An incredibly good feature list and great image quality make this monitor one of the best entry level competition spec compliant monitors that are currently on the market. If you find one on sale and are in the market for a budget gaming spec FHD monitor, the XL2411 makes a choice temptingly easy.