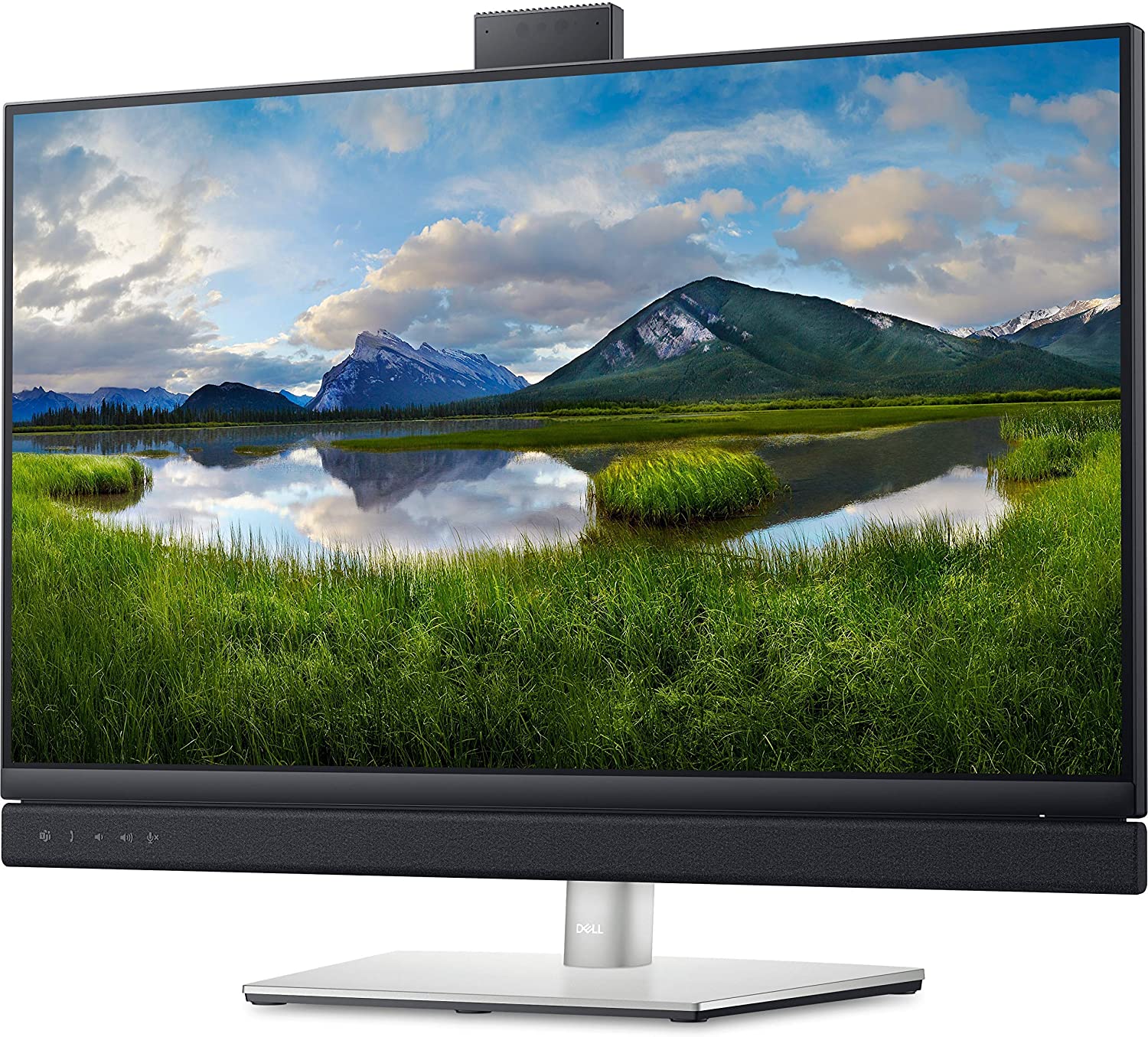 The Dell C2722DE is a newly-designed business monitor that answers the need for efficiency and seamless collaboration in today’s new normal. The world is slowly getting back on its feet, but there’s no denying that the majority of personal meetings and gatherings might be a thing of the past. The Dell C2722DE is both a PC monitor and a productivity hub, so let’s check out what it can do for the workforce. 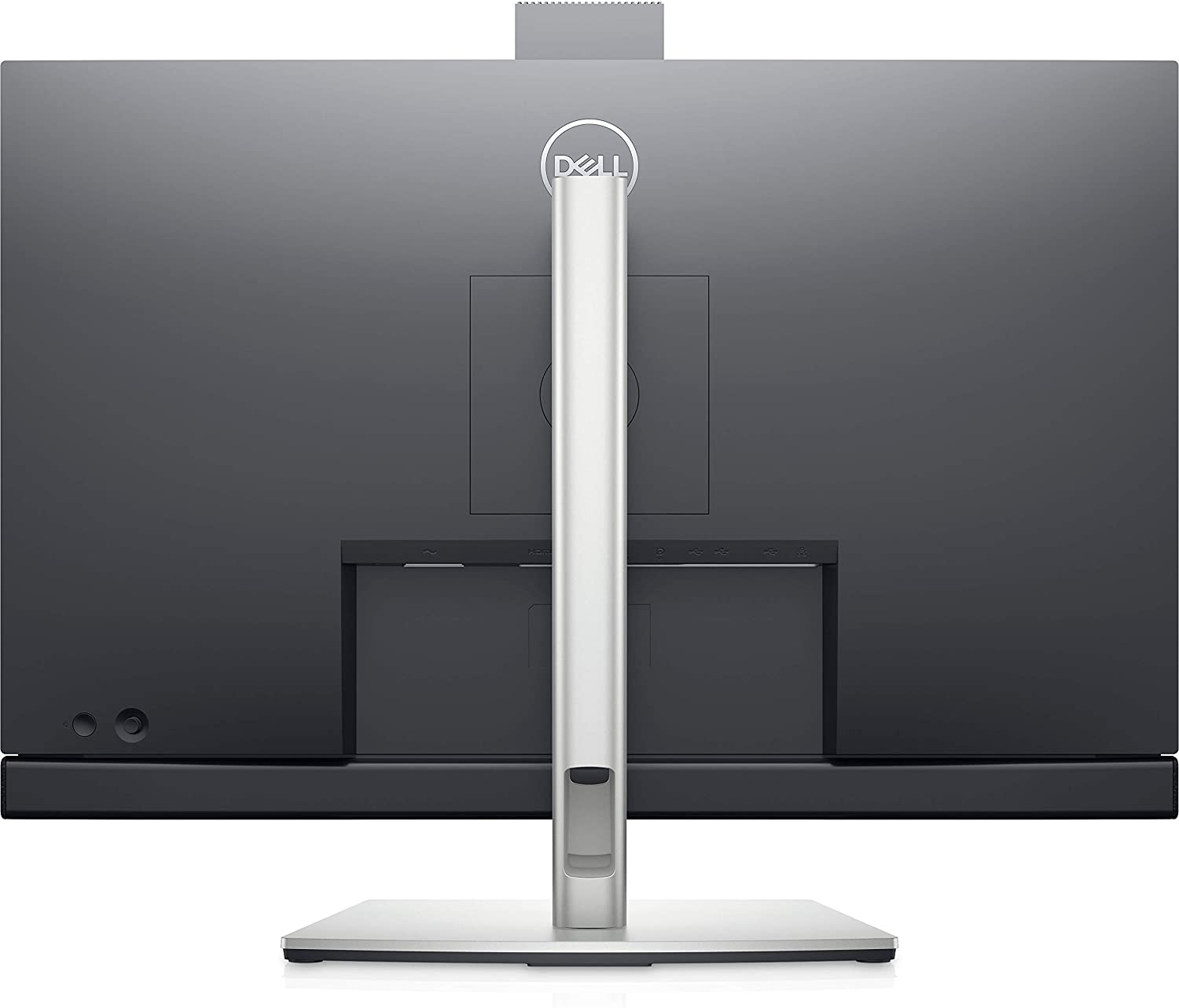 The Dell C2722DE looks almost exactly like the Dell U2722DE, but it has a few visible addons that will separate it from the other monitor series. It still uses the matte black and silver combination which provides that timeless, professional look that will match workstations and not clash with gaming builds. The screen is bezel-free on three sides so you get a maximized view of the QHD display.

We like that the Dell C2722DE’s extra features did not affect how slim and sleek the monitor is in person. Its base is slightly deeper than its UltraSharp counterparts, and the height of the screen is slightly taller due to the accessories. It doesn’t weigh a lot at 12.7 pounds, so it is easy to move around if you are working in shared spaces.

Build quality for the Dell C2722DE is fantastic as expected from a brand that’s quite popular in the business monitor market. The product is mostly made out of plastic, but they are properly reinforced so it won’t easily flex or crack. The included stand provides fantastic stability so don’t have to worry about a shaking screen during crunch time.

It also includes an OSD joystick for easy access to settings and features, letting you spend less time tinkering with it.  It can also be remotely managed via its LAN port, so its also designed for enterprise systems and studios. Dell Display Manager offers plenty of tools to maximize the monitor, so its functionality is brilliant for the right user. 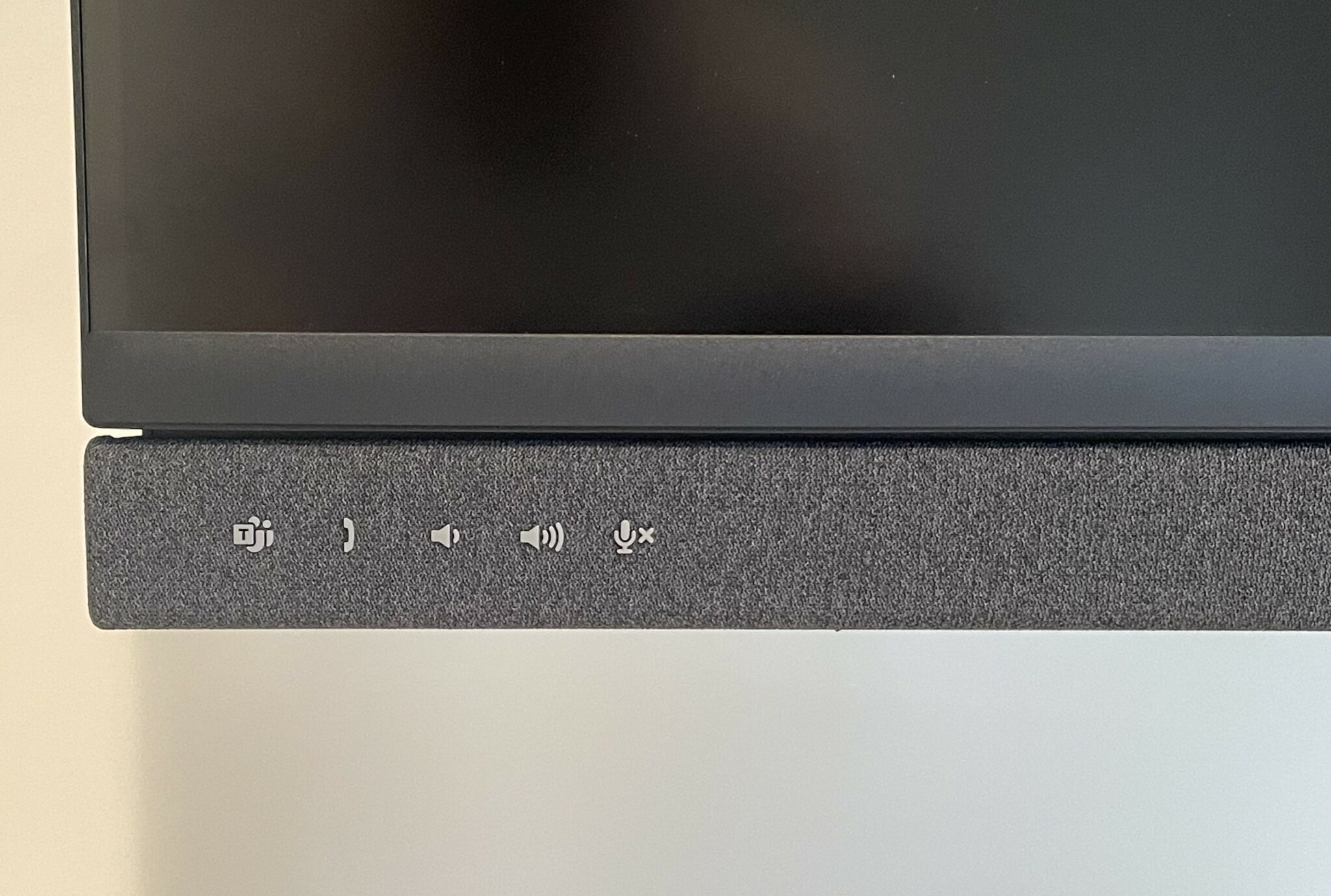 The Dell C2722DE is built for loud and clear communication with its integrated 5-watt speakers at the bottom that has dedicated control and Microsoft Teams buttons. It also has a pop-up 5MP IR camera with noise-canceling microphones for video calls and secure logins. These add-ons helped make the C Series monitors become the world’s first displays that are certified for Microsoft Teams.

It also comes with a bevy of connectivity ports to complement its functional design for business or work from home use. The layout at the rear starts with DisplayPort 1.4 and HDMI 1.4, along with a DP Out slot with MST for daisy-chaining. You also get four USB 3.2 high-speed connectors for accessories and a 90-Watt USB-C connector that supports DP Alt Mode.

You can use the latter for USB-C laptops like MacBook Pros which will charge and transit video inputs at the same time. The second USB-C slot only pumps out 15 watts which is more than enough for mobile phones. You will also find an RJ45 connector for networking, plus a 3.5mm jack for audio devices to round up the ports at the rear.

The sound quality of the Dell C2722DE’s 5-watt speakers is tiers above when compared to most built-ins. They aren’t capable of deep bass, but they are quite clear for voice and even music, plus they aren’t as hollow-sounding. The microphones on the webcam are quite decent as well, although its noise-cancellation range will pale in comparison to dedicated USB microphones.

The Dell C2722DE sports a 27-inch IPS panel with a 2560 x 1440 resolution, a 60Hz refresh rate, and a 5ms fast response time. The backlight has a 350 cd/2 maximum, while the contrast ratio is listed at 1000:1 like most IPS panels. This model doesn’t put emphasis on speed or HDR since it’s a business monitor which requires functionality and reliability more than anything. 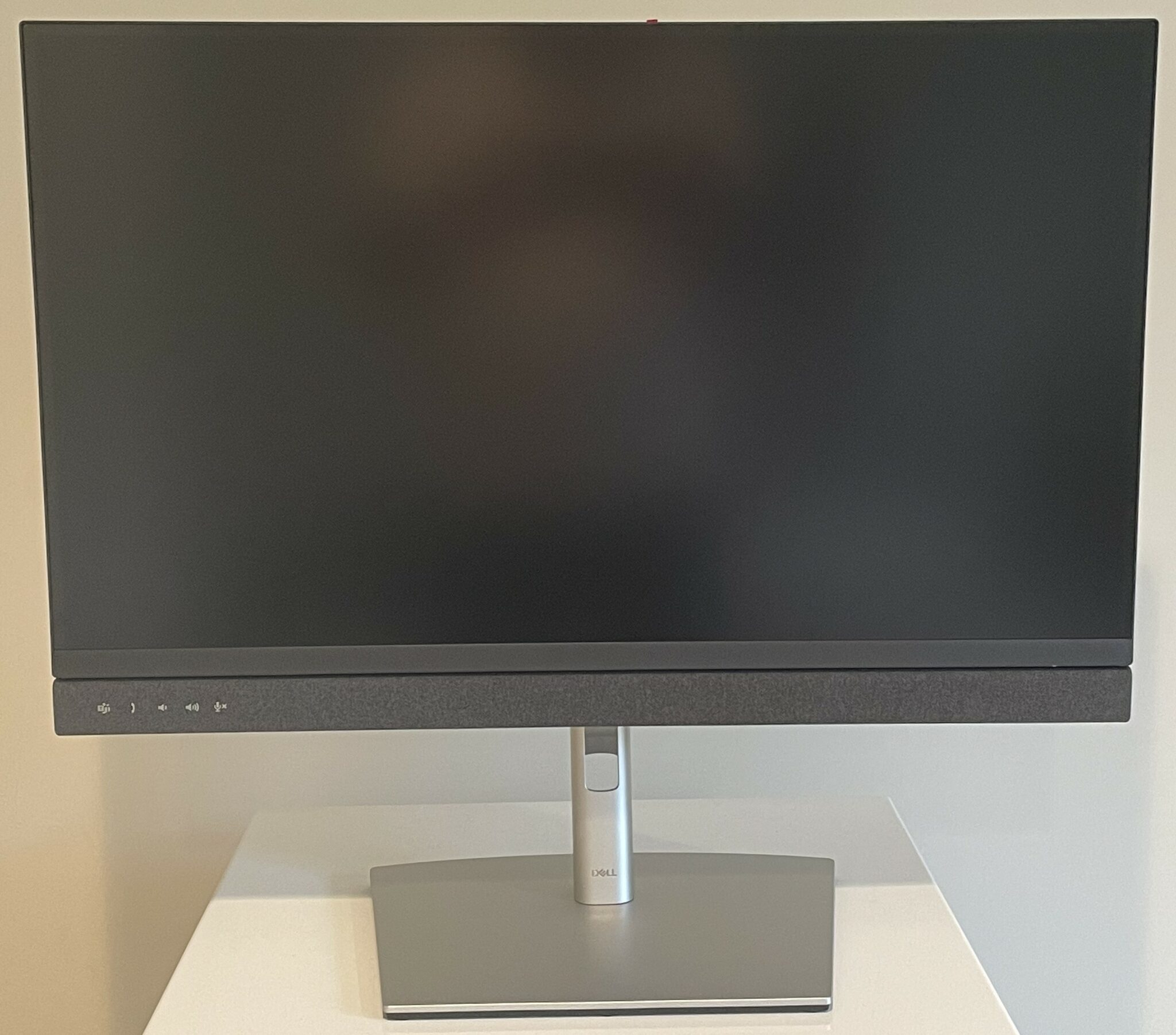 27-inch 1440p monitors are perfect for productivity since they have bigger spaces and sharper outputs than the usual 1080p displays. This will help with productivity, but it doesn’t sacrifice your visual health and safety by becoming too sharp to read on. This series also has 24-inch 1080p and 34-inch UWQHD variants, so you can think of this model as the sweet spot.

The Dell C2722DE renders 100% sRGB and around 85% DCI-P3 with some extensions for rich colors and saturation. However, its default accuracy left something to be desired since the dE average sat at 3.13 using the default setup. The screen looks bluish-green when viewing white backgrounds, so some calibration is in order. 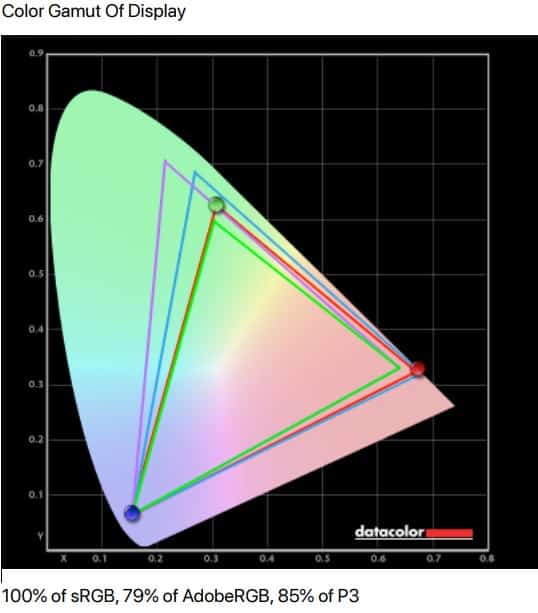 Tweaking the Dell C2722DE manually can lower the dE average to around 1.45 which is great for daily use. You can also use a colorimeter to squeeze more performance out and to lower its dE average to an excellent 0.76. It’s not factory-calibrated to a similar degree with the UltraSharp models, but results like this vary between review units.

The Dell C2722DE reaches 344 cd/m2 at maximum, while its contrast ratio peaked at 971:1 at 60% brightness. That’s slightly lower than the U2722DE’s results, but it is within the margin of error between the two. Still, this model is unable to produce deep blacks like VA panels, so it can look washed out in dark scenes or when it’s used at night. 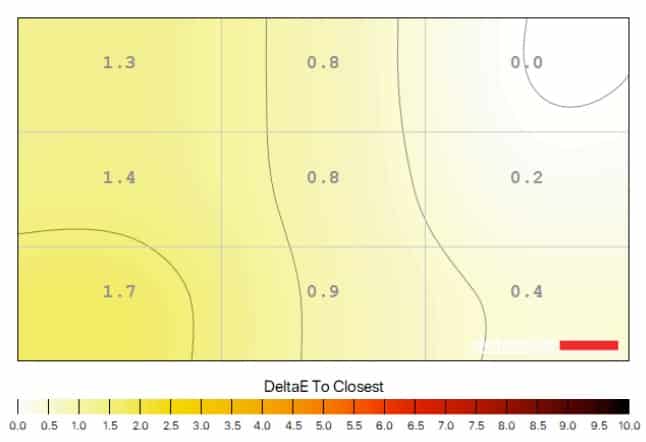 Panel uniformity is decent, although there is a slight hint of brightness loss on one side of the screen. However, it is only noticeable in all-black images or dark scenes, so it shouldn’t be bothersome while you are working with common productivity programs. Take note that this varies between monitors as well so each unit will have a different output to show.

Responsiveness isn’t the best with this model, but that’s understandable since it is limited to 60Hz and it is not for gaming. you do, however, need to use the Fast setting of its overdrive to reduce the trailing and smudges that become noticeable in select transitions. This also means the C2722DE is only suitable for casual gaming, but that’s fair for a monitor designed around remote use.

The Dell C2722DE doesn’t support FreeSync, so naturally, G-Sync compatible mode is out of the question. The screen does ok against tears with an upper mid-range GPU or if you compromise on the title’s graphics quality to meet a stable framerate. Input lag at 60Hz is at 10ms, so there is no need to worry about delays or de-synced instances while gaming.

Thoughts on the Dell C2722DE

The Dell C2722DE is a superb choice if you want a functional monitor that can help you make the most out of remote setups. Its IPS panel isn’t very accurate, but its connectivity layout and camera/speaker combo work great for conferencing. You pay a slight premium for these add-ons, but again, they are must-haves for the right group of professionals.

The world is slowly getting back on its feet, but there’s no denying the benefits of work from home or remote setups. We think tools like these are invaluable for the current phase of business and general computing in the near future. It’s a great buy for those who can use its dedicated design, but the U2722DE is a better pick for everything else.

Search
NEW
POPULAR
You are here: Home / Reviews / Dell C2722DE Review – Dell’s New Collaboration Series Monitors for the New Normal
This website uses cookies to improve your experience. We'll assume you're ok with this, but you can opt-out if you wish.Accept Read More
Privacy & Cookies Policy
Necessary Always Enabled
Share This