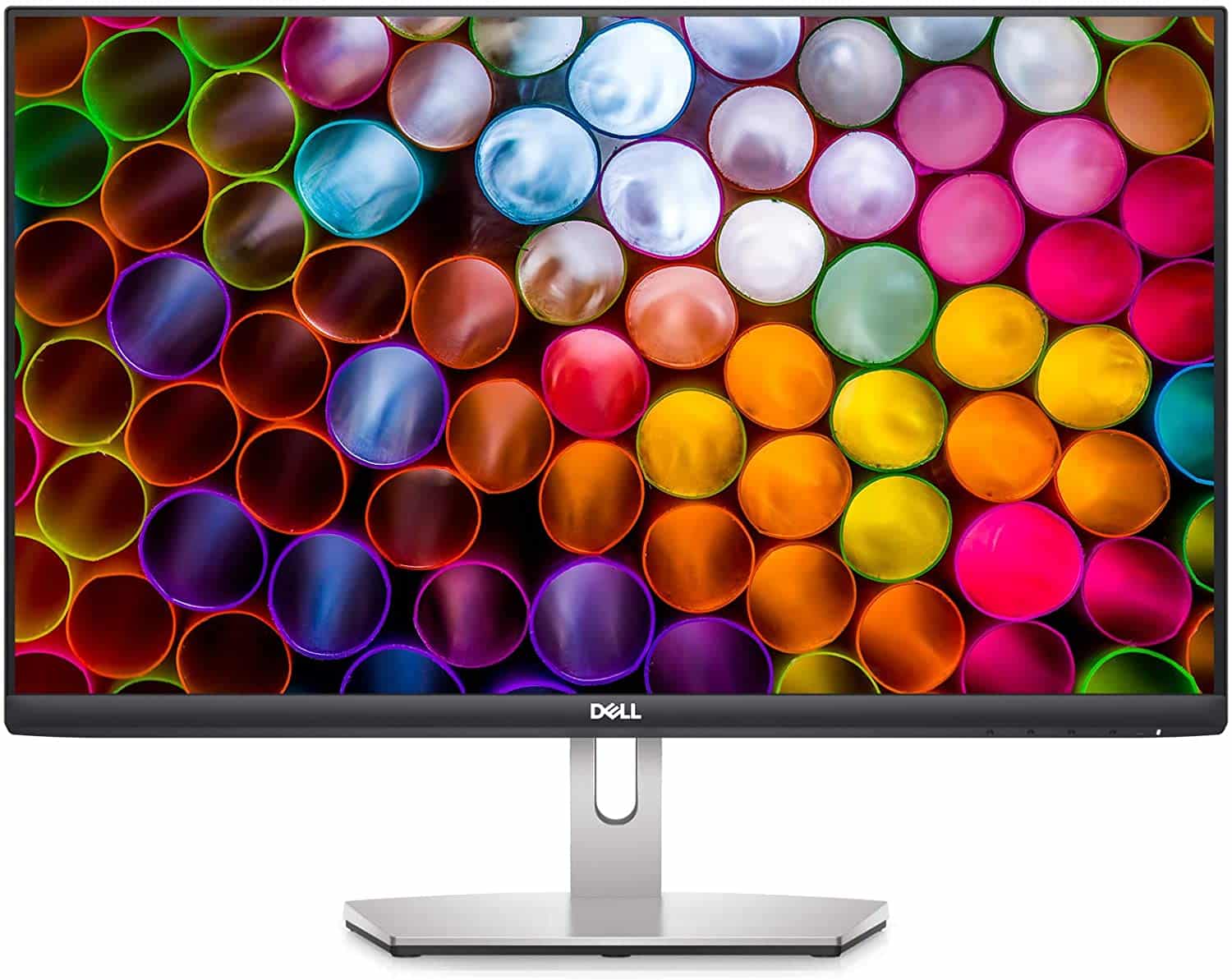 The Dell S2421H is an inexpensive monitor designed as a reliable daily driver for most uses, including for those who work from home. It doesn’t have plenty of extra features, but it promises consistency and clear views of your content and documents. Let’s see if the Dell S2421H offers a compelling package versus its predecessors and competitors. 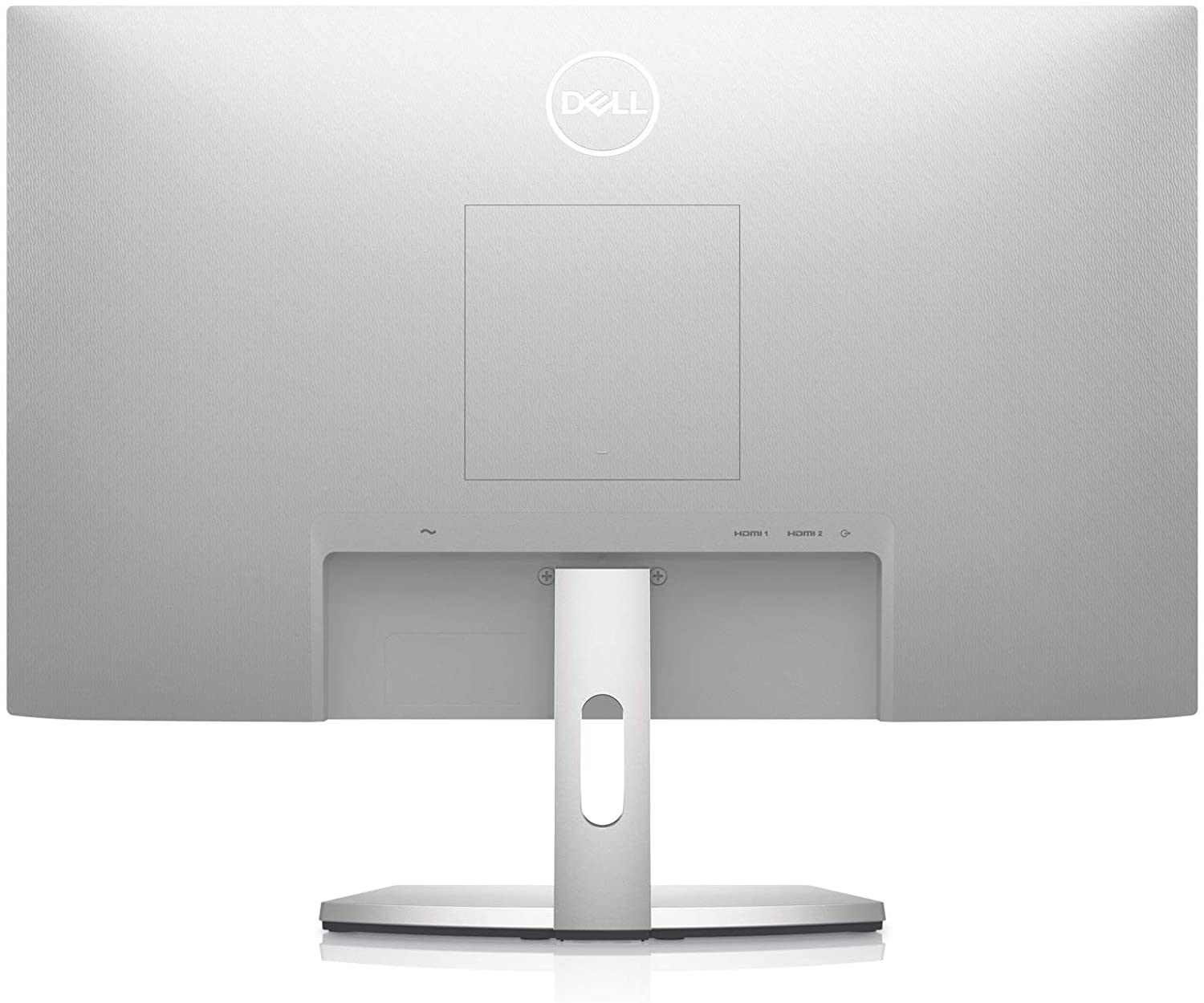 The Dell S2421H sports the same sleek aesthetic as its predecessor, but it has a few minor changes that make it more attractive. The monitor has a matte light gray chassis and a silver stand, but its bezel is still matte black. However, you will only see that plastic strip on the bottom edge since the monitor has a frameless design.

One benefit of getting a sleek and slim monitor like the Dell S2421H is that you don’t have to worry about the space that it will consume. It weighs under 10 pounds, so it’s quite portable and easy to move around. The base doesn’t have a regular shape, but it’s flat and it can hold some of your small peripherals easily.

Build quality for the Dell S2421H is great since there are no signs that it’s a cheaply made variant like many in its price range. The plastics used feel sturdy so they won’t flex or crack easily, and there are no uneven gaps or seams. The stand does have a slight wobble, but it won’t be an issue since it only happens when you nudge the screen.

One downside with the Dell S2421H as a budget monitor is it still used OSD buttons instead of a more user-friendly joystick. The keys are located under the bottom bezel with labels upfront, but it’s still difficult to get used to them especially if you work at night. Brands like Samsung and LG are already offering joysticks or software implementations on budget models, and we wish Dell would follow suit.

The stand included with the Dell S2421H is unchanged, so it only offers tilt so it’s not ideal for specialized setups. This won’t be an issue for single display setups, but tall users will have an issue no matter what since the monitor sits low. However, this 2021 iteration now comes with VESA mounting holes, so you can opt for aftermarket stands or arms if you want multiple screens or if flexibility is a necessity.

Connectivity the Dell S2421H only includes two HDMI 1.4 slots and a 3.5mm jack for headphones. That’s enough for the monitor’s resolution and most devices since HDMI is a standard on all of them, including gaming consoles. However, we’d love to have a DP slot here for the PC so the two HDMI ports can be delegated to secondary devices.

The Dell S2421H manages to squeeze in a pair of 3-watt speakers which can get decently loud. They don’t have the necessary oomph for gaming, but they are usable for background music and even some videos. It’s always nice to have backup speakers even if you already have a headset since they can relieve you of hot and sweaty earcups in some circumstances.

Its also important to remember that the Dell S2421H also has two other variants named the S2421HN and the S2421HS. The former is a cheaper version that doesn’t have speakers, while the latter includes an adjustable stand for a slightly higher price. The S2421HS is a no-brainer, but at least you get three price points to choose from.

The Dell S2421H offers a 24-inch IPS panel with a 1920 x 1080 resolution, a 75Hz refresh rate, and a 4ms minimum response time. The backlight is limited to 250 cd/m2 while the contrast ratio is listed at 1000:1 like most IPS panels. This model doesn’t have special features, but its 75Hz refresh makes it an affordable choice for casual gaming.

24-inch 1080p monitors aren’t that awe-inspiring anymore by today’s standards, but they are still quite popular in offices, schools, and homes. Most users won’t struggle with adjusting to the screen because it’s most likely that they’ve already experienced monitors like this personally. Its great for all-around use such as document processing and gaming, but you don’t get the extra space that comes with 1440p and 4K variants.

The Dell S2421H covers 100% of the sRGB gamut and around 71% of DCI-P3 which enables it to produce well-saturated images. The default accuracy sits at 2.03 which is excellent for a budget monitor, so most users won’t need to tweak it right away. It looks like Dell applied some factory tweaking to the monitor, although we have seen tighter scores on some of their pricier models.

Calibrating the Dell S2421H improved its dE average to 1.13 which is again, impressive for a budget model. We’ve seen some sub 1.0 scores for prosumer models, but that isn’t comparable in this case since those monitors usually cost 3-4 times more. however, you do need a colorimeter to achieve this, and we that its impractical to get one for a display at this price range.

The Dell S2421H has a 264 cd/m2 backlight maximum which is decent, but it might struggle against glare or in well-lit rooms. The contrast ratio hit as much as 1137:1 at 70% brightness which is an excellent score when it comes to IPS variants. However, the screen can still look grayish in dark scenes or when showing black images, especially when it’s viewed at night.

Panel uniformity for the Dell S2421H was great in full-color images, but some clouding issues appeared in black images. The corners have some minor backlight bleeding, but it only affects the appearance if you are viewing dark images. This issue is common on IPS panels, but there are units out there with better quality.

Pixel response time on the Dell S2421H is excellent for a 75hz budget monitor since it barely shows blurring and ghosting. Setting the overdrive to its Fast setting will reduce the persistence and smudges in contrasting transitions, so it will be less of a burden on your eyes. It’s not ideal for competitive gaming, but it should be great for casual titles like RPGs and consoles.

The Dell S2421H supports FreeSync and G-Sync works if you force it via the Nvidia Control Panel. VRR isn’t entirely necessary at 1080p 75Hz except for some extreme circumstances, but having both will come in handy at some point. Input lag is at 9ms at 75Hz, so delays shouldn’t be an issue during regular use.

Thoughts on the Dell S2421H

The Dell S2421H is a great budget pick if you want a vibrant IPS screen with some extra refresh rate headroom and decent overall performance. It’s not prosumer-grade, but users will appreciate the great gamut coverage and the good default accuracy. We like the aesthetics of the monitor, especially now that it’s VESA compatible for those who have multiple screens.

There is very little to complain about with the Dell S2421H even if it’s missing a few key features like an adjustable stand. However, it’s hard to argue due to its overall quality and price point, so most of these issues are forgivable. It’s a great pick for productivity or work from home use, and it’s also quite capable for casual gaming.

Search
NEW
POPULAR
You are here: Home / Reviews / Dell S2421H Review – Affordable 1080p IPS Monitor for Work from Home and Mixed Use – Recommended
This website uses cookies to improve your experience. We'll assume you're ok with this, but you can opt-out if you wish.Accept Read More
Privacy & Cookies Policy
Necessary Always Enabled
Share This