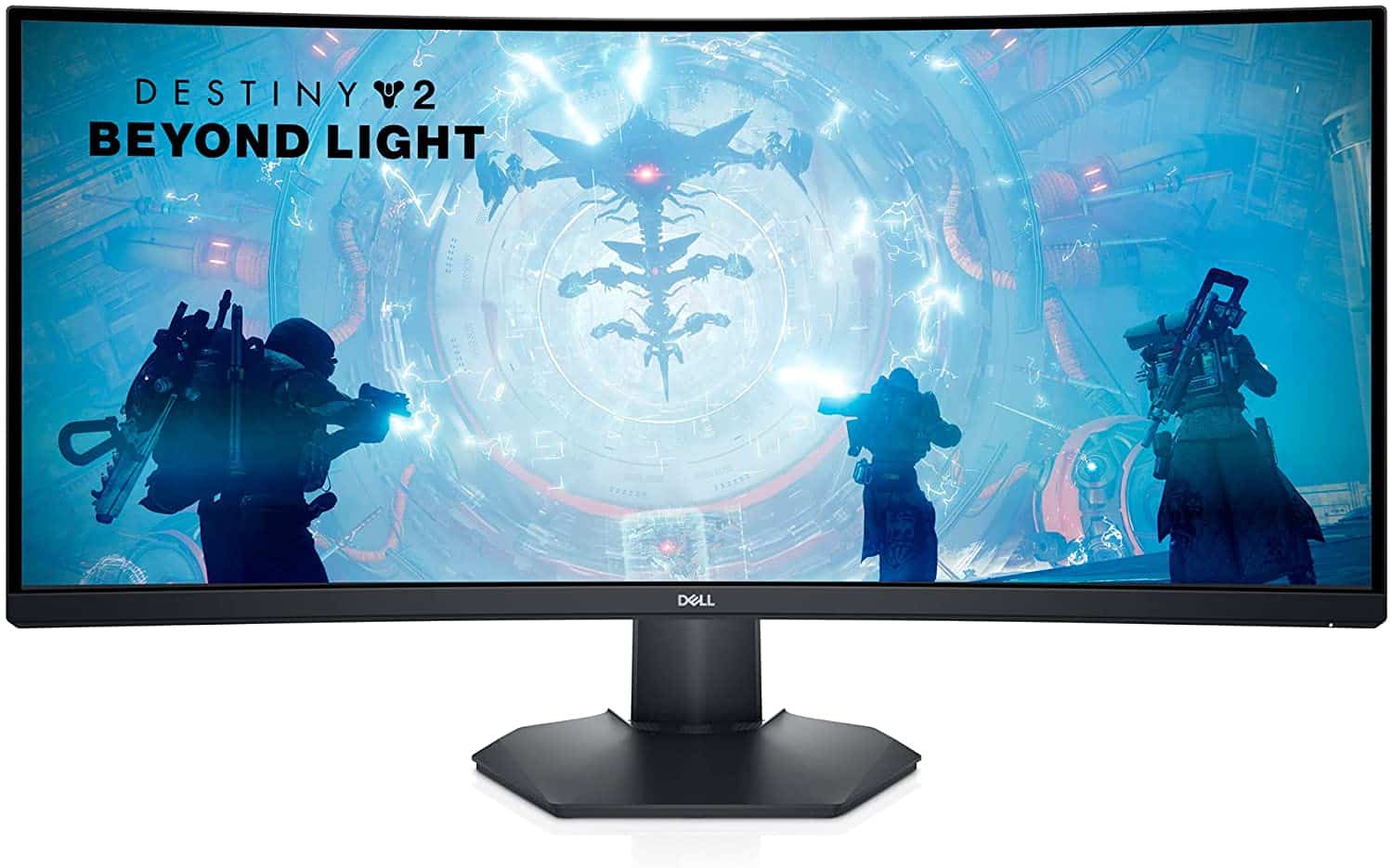 Check the Latest Price on Amazon

The Dell S3422DWG offers a fast and immersive ultrawide screen for intense gaming at a budget-friendly price point. It surprisingly has a lot of competition, such as the Gigabyte G34WQC and the AOC CU34G2X, so it can’t bank on pricing alone. Let’s see how the Dell S3422DWG performs and if it can top the established best sellers in the market. 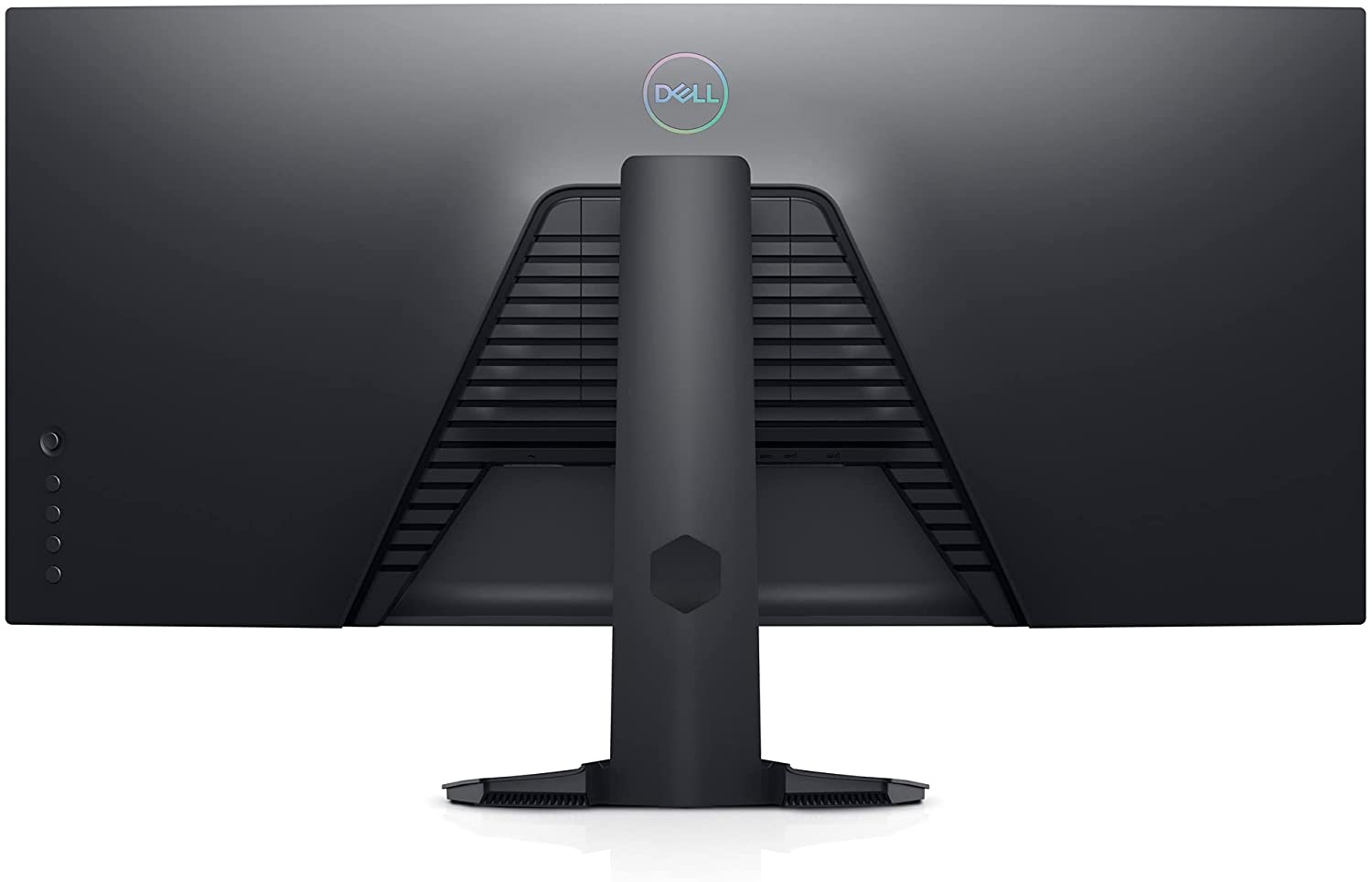 The Dell S3422DWG sports the same aesthetic as monitors like the S2722DGM, but it’s, of course, wider and bigger. The device has a timeless matte black finish and will never look out of style beside your gaming setup. The display is bezel-free on three sides, but you will still see inner borders when not used.

You have to prepare your desk for the Dell S3422DWG since it is humungous, especially when compared to your outgoing 16:9 display. Its width can interfere with speakers, although it doesn’t consume too much depth for its size. It also doesn’t weigh a lot at 16.99 pounds, but asking for help in setting up can avoid tragic accidents during installation.

Build quality for the Dell S3422DWG is great, even if it’s almost entirely made out of plastic. The device doesn’t have cosmetic defects, and the plastics seem like they are durable enough to withstand cracking and flexing. There is some wobble, but it mostly happens when you nudge the monitor accidentally or use its control layout at the back.

You will find an OSD joystick at the back of the chassis that’s accompanied by hotkeys for convenience. It’s easy to navigate the OSD with this layout, plus you can customize each button’s functions, so you can quickly access a setting or a preset. It can’t get better than that without affecting the low price of the monitor.

The stand included with the Dell S3422DWG only offers tilt and height adjustments, but that’s enough for daily use. You don’t need to swivel the screen, and it’s not ideal to use it in portrait mode anyway. You can swap this part out with a VESA mount if you need more flexibility, but that adds more to your total cost when you upgrade.

The Dell S3422DWG includes DisplayPort 1.4 and two HDMI 2.0 ports, five USB 3.2 Gen.1 ports, and a 3.5mm jack for earphones. The latter and two USB slots are placed in a hub at the bottom of the chassis for easy access. Note that the HDMI 2.0 ports are limited to 100Hz, so you need to use the DisplayPort if you are gaming on a PC.

The Dell S3422DWG doesn’t have speakers, but that’s understandable since it’s a low-price option. It is also common knowledge that gamers prefer headsets for both immersive and competitive titles since they will drown out ambient noise. However, we think they are useful now more than ever due to the rise of remote work, so they still add value to a display product even if they are considered as secondaries.

The Dell S3422DWG boasts a 34-inch curved VA panel with a 3440 x 1440 resolution, 144Hz refresh rate, and a 1ms MPRT response time. The backlight has a 400 cd/m2 output while the contrast ratio is listed at 3000:1 like most VA panels. This model is DisplayHDR 400-certified, but we know that it cannot produce an appreciable HDR performance due to its limitations.

34-inch QHD ultrawides are great for both productivity and gaming due to the large screen and high resolution. It’s not as crisp as a 4K monitor, but the pixel density is just right to make games look sharper and cleaner. However, that same PPI isn’t too tightly bound, so letters and numbers do not become microscopic as they do on 4K displays.

The Dell S3422DWG renders 99% sRGB and 87% DCI-P3, which works great for daily use and gaming. Its default accuracy could be better since the deltaE average is at 2.79, but that’s still acceptable for most uses. Most users will be hard-pressed to notice the color deviances, so it should be good to go after a few minor tweaks.

Calibrating the Dell S3422DWG lowered its dE average to 0.63, which makes it suitable for color-critical work. However, you will need a colorimeter to get this kind of result since each monitor has varying results when using the same OSD settings. We don’t recommend buying one for games and daily use since it’s expensive and only necessary for color-critical work.

The Dell S3422DWG reached 378 cd/m2 in SDR but peaked at 510 cd/m2 when HDR was active. Its contrast ratio reached 2845:1 at 60% brightness, so the screen is capable of deep blacks and convincing nighttime scenes. However, it’s not enough to create convincing HDR imagery since it is not bright enough and it doesn’t have a complete FALD backlight.

Its panel uniformity could also improve since there are some backlight leaks on the top edge of the screen. It’s minor, but they become slightly noticeable when the screen is black or showing dark scenes. This is common on curved monitors, but it is not permanent, so better units are out there.

The Dell S3422DWG can great pixel response time as long as you use its overdrive’s Super Fast setting. You still get some smudging and trailing, but it only happens in dark scenes with swift motion and transitions. It’s not the best for competitive gaming, but it’s still suitable in many ways other than this facet.

The Dell S3422DWG is a FreeSync Premium Gaming monitor, but it also works with Nvidia’s G-Sync Compatible mode even if it is not certified. It’s essential to have this feature to avoid getting stuck with one brand to enjoy VRR and its benefits. Input lag sits at 6ms at 144Hz, so there is no need to worry about delays while enjoying your favorite titles.

Thoughts on the Dell S3422DWG

The Dell S3422DWG is an excellent choice if you don’t want to spend a small fortune on an immersive, high-speed monitor. It offers rich colors and contrast, plus it’s quite fast thanks to its 144Hz refresh rate and effective overdrive feature. It’s a well-designed gaming monitor that will not disappoint and hurt your finances.

However, there are some imperfections with the Dell S3422DWG, such as its panel uniformity and poor HDR performance. However, most of these come naturally with the panel tech and the low price, so it will be easy to overlook them once you are enjoying the ultrawide screen. Overall, it is an excellent buy for users who want to improve their gaming and visual experience with a wider display.