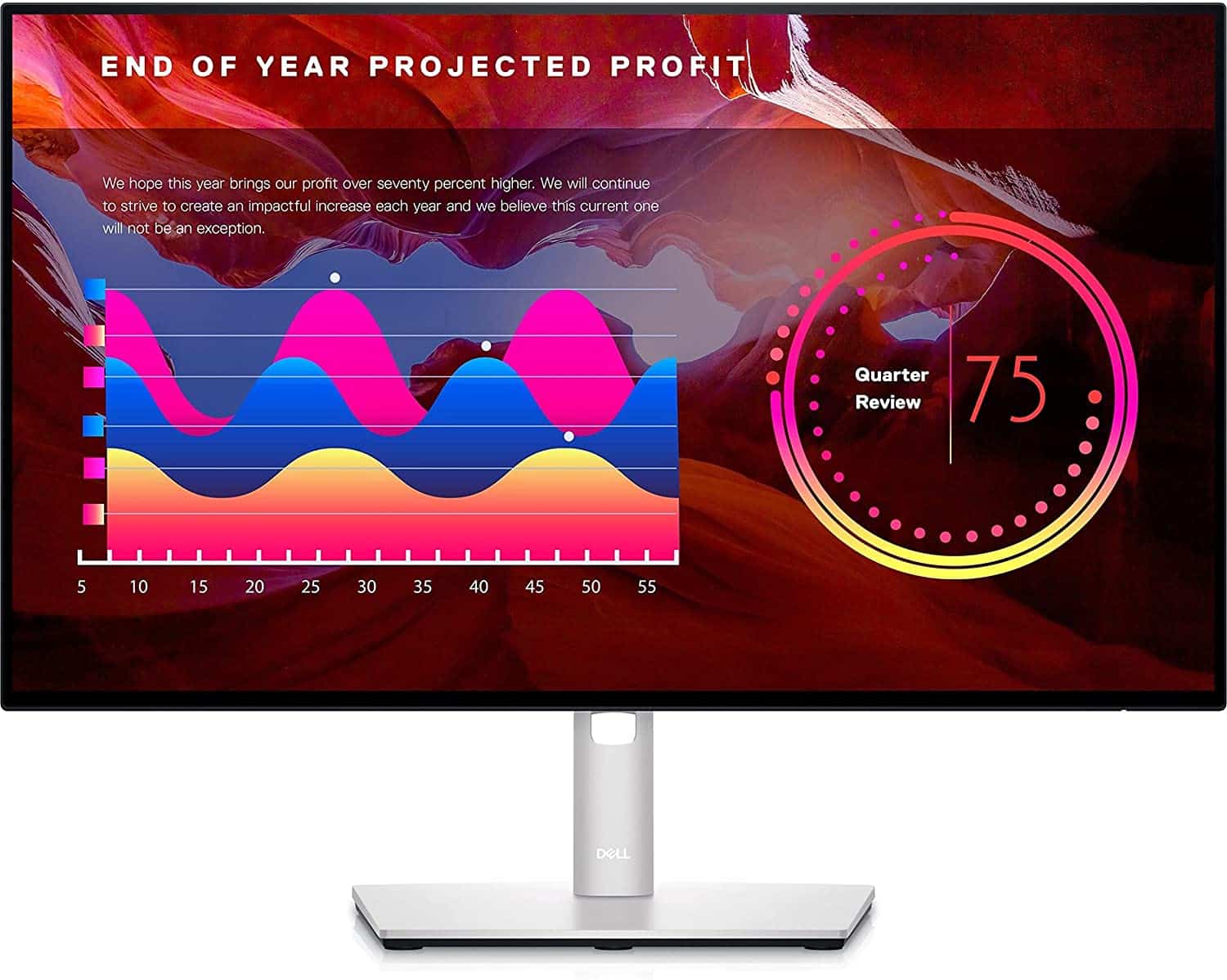 The Dell U2422HE provides a seamless work experience with its vibrant IPS panel and its USB-C connectivity for the modern executive. It’s the 1080p version of the U2722DE we reviewed earlier, and but it comes in a more compact 24-inch package. However, the Dell U2422HE is exorbitantly expensive for a 1080p monitor, so let’s check out if its performance can justify that. 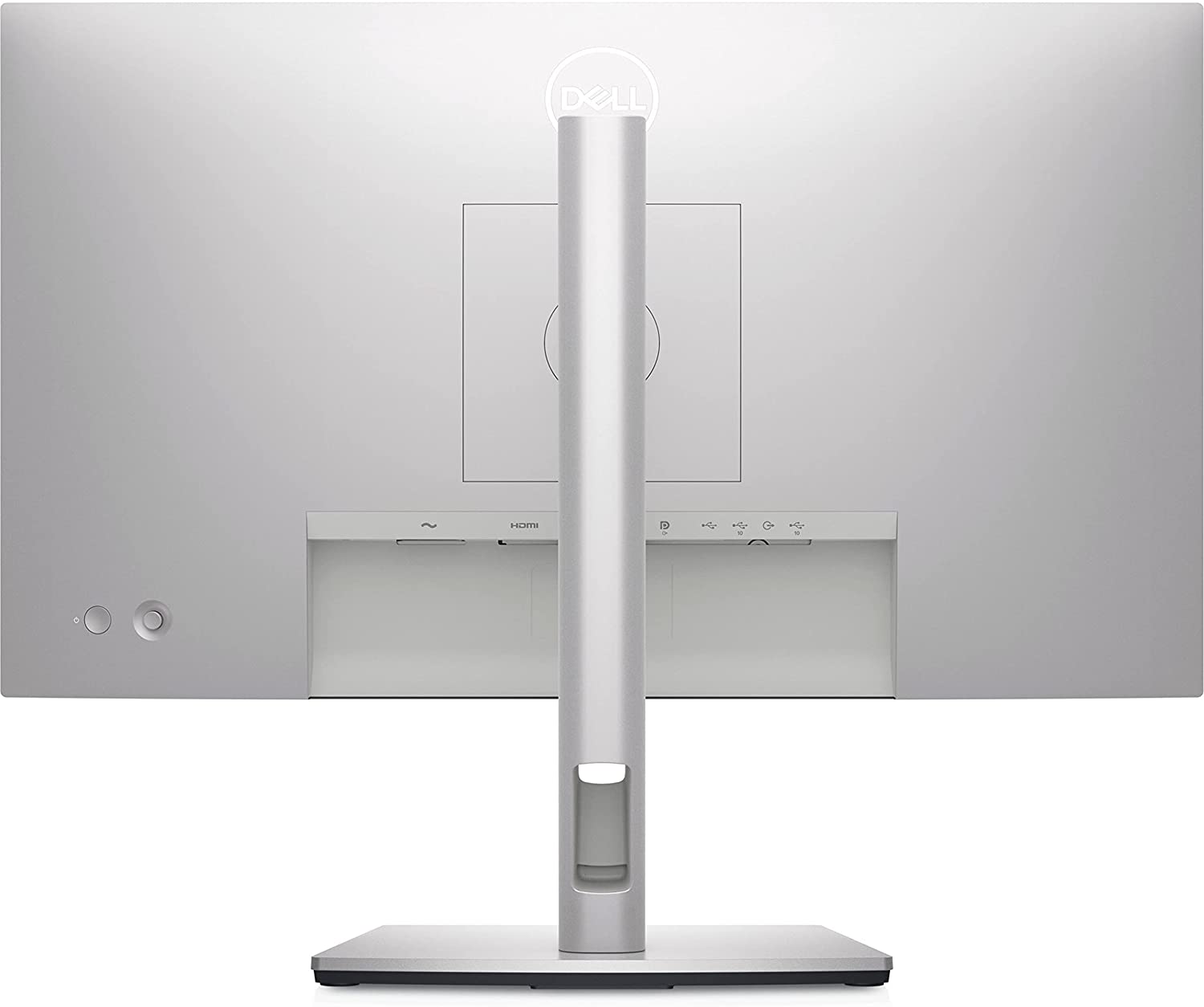 The Dell U2422HE has a classy design that makes it look suited for a posh studio or an executive office. It has a matte silver shell with a bit of matte black on the edges so it will look good next to a gaming PC or a high-end workstation laptop. The display has very thin borders so the viewable area looks slightly bigger than it should when it’s in use.

We like how modest the Dell U2422HE’s dimensions are not only because it’s a 24-inch monitor, but it’s also aiming to be environmentally friendly. Its parts such as the base were reduced drastically so it uses fewer materials and it only consumes seven inches of depth. It weighs under nine pounds so it will be fairly easy to move around if you rearrange often.

Build quality for the Dell U2422HE is great even if it’s slimmer and lightweight compared to its predecessors. The plastic panels do not flex and they won’t crack easily, plus there were no cosmetic defects on any of its parts. The included stand is firm and stable, so you won’t have to deal with a shaking or sagging display while working or gaming.

The Dell U2422HE’s OSD can be controlled with a single OSD joystick at the back of the screen for your convenience. You can also utilize Dell’s Display Manager app to get the most out of the monitor’s capabilities. Frankly, this is more than sufficient making monitor manipulation easier, so premium extras like remotes aren’t necessary.

The stand included with the Dell U2422HE offers tilt, swivel, pivot, and height adjustments for flexibility. It’s easy to get a comfortable view angle with the default setup, and you can rest assured that it will not sag or shake. You can also use VESA mounts, but it is only necessary if desk space is limited or if you have multiple screens.

The Dell U2422HE has a very connectivity suite that’s overkill for typical home and office setups. It includes DisplayPort 1.4 and DP Out slot for daisy chaining, HDMI 1.4, and four high-speed USB 3.2 ports for accessories. It also has two USB-C ports, but only one supports DP Alt mode for single cable operation with laptops.

The primary USB-C slot also offers up to 90 watts of charging power which is sufficient for high-spec laptops. The other USB-C port is only mean for data downstream, but it still puts out 15 watts of power for mobile devices. It also has an RJ45 LAN port for network management and synchronization in settings like businesses or offices.

The Dell U2422HE doesn’t have speakers like its bigger siblings since its designed to hold a dedicated mini soundbar. The chassis has pegs that can accommodate the Dell SB521A which magnetically attaches to the bottom of the screen. it’s a clean and sophisticated solution, but it is an added cost that many will not appreciate.

The Dell U2422HE sports a 24-inch IPS panel with a 1920 x 1080 resolution, a 60Hz refresh rate, and a 5ms minimum response time. The backlight has a 250 cd/m2 brightness while the contrast ratio is listed at 1000:1 like most IPS screens. This model is designed for productivity and business use, so it doesn’t come with special features like HDR.

24-inch monitors with 1080p panels are not the sharpest in the market, but it is still widely accepted since it’s a standard format. Schools, businesses, and even gaming competitions still use 1080p so many users are still familiar with it. It’s also easy to run with low-end gear, but that mostly matters more in gaming use.

The Dell U2422HE covers 100% sRGB and around 91% DCI-P3, making the screen one of the most vibrant in its category. Its default accuracy isn’t perfect, but the 2.51 deltaE average is good enough for daily use. Most users won’t need to calibrate it since it already looks acceptably balanced by default, apart from adjusting the backlight to a comfortable level.

Calibrating the Dell U2422HE reduced the dE average to an impressive 0.67 which is what you would see on an editing variant. You need a colorimeter to achieve this, but it is only necessary for editing professionals since they are expensive. Alternatively, you can use its sRGB function which also has a low dE average, but it will limit the gamut to 99% sRGB.

Its backlight reached 267 cd/m2 at a maximum which isn’t as bright as the U2722D’s output, but sufficient in most cases. Its contrast ratio only reached 965:1, so it can’t produce deep blacks like VA and OLED-based variants. This is a known limitation of IPS panels, so we don’t consider it bad even if some treat it as a deal-breaker.

Panel uniformity for the Dell U2422HE is excellent since there are no considerable backlight leaks or clouding issues on its quadrants. There are some deviances in the backlight’s spread, but it was too little to notice in different scenes. Take note that this could change with other U2422HEs due to tolerances and the nature of IPS technology.

The Dell U2422HE isn’t the fastest monitor we’ve reviewed, but that’s a given since it’s limited to 60Hz. It is prone to a bit of blurring in fast-paced and contrasting scenes, so it’s not great for shooters and games with plenty of motion. Only the Normal setting in its overdrive is usable since the Fast level induced noticeable overshoot which was worse than the blurring in the first place.

The Dell U2422HE doesn’t have Adaptive Sync capabilities so FreeSync and G-Sync are out of the question. However, that’s understandable since this is a productivity model, and it’s only 60Hz 1080p. Input lag sits at 10ms at 60Hz so the screen is still reasonably responsive without any perceivable delay.

Thoughts on the Dell U2422HE

The Dell U2422HE is an excellent option for business users who want a powerful display solution that can integrate into their specialized setups. It’s got a powerful connectivity layout which makes it ideal for power users that have modern devices like MacBooks. Its panel’s performance is nothing to sneer at as well since it offers plenty of colors and accuracy even if you use its default setting.

The biggest downside of the Dell U2422HE is its price which many will consider to be too expensive for a 1080p office display. We also dislike the fact that it is designed so that you spend more money if you want integrated audio. However, it’s an excellent pick for work from home and office use provided that you can catch a deal on it.