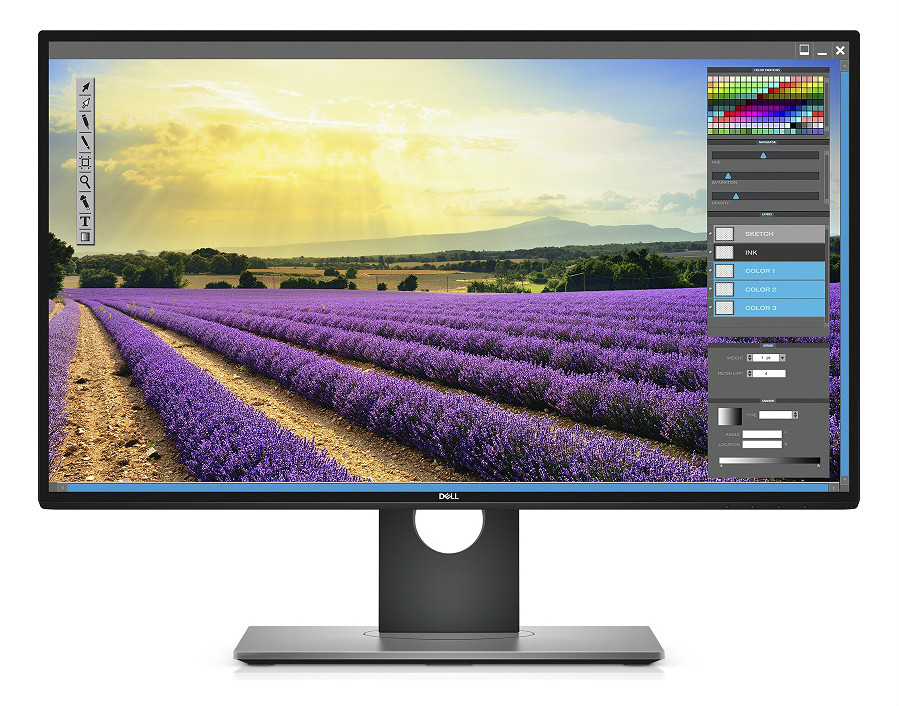 The Dell U2518D aims to provide high-quality images augmented with HDR for the masses amidst rising availability and demand of the highly-sought color standard. 2560 x 1440 squeezed into 25 inches of space is a must for crisp detail lovers, making images and text easier on the eyes. The Dell U2518D packs these highly attractive features into a neatly designed package with a lower price,  piquing our interest to see how well this product performs. 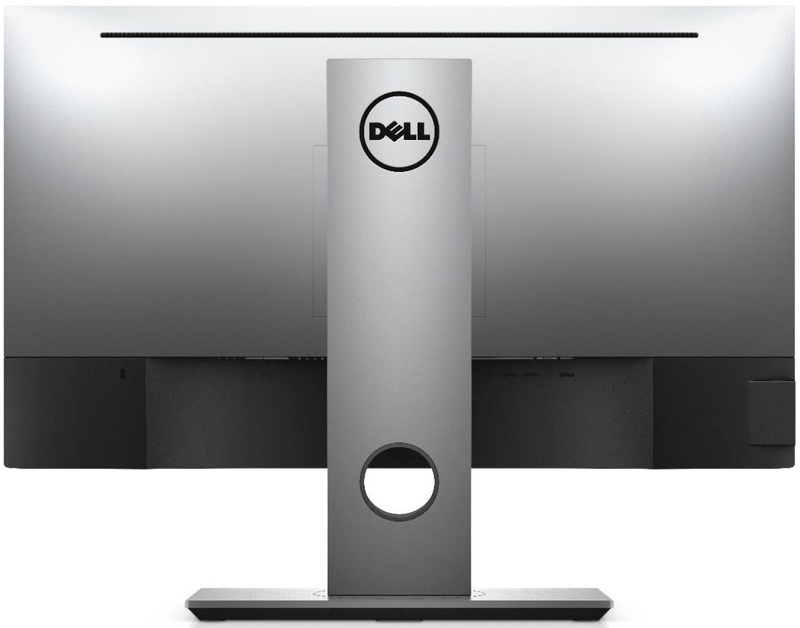 Dell’s products include one of our favorite designs due to their simplicity and neatness, and the Dell U2518D isn’t an exception. This model comes in matte black and gunmetal gray with slim proportions, plus the face is virtually bezel-free. The brand used its dual-stage design made up of a plastic outer layer followed by thin panel borders which disappear into the blackness of the panel.

Only the button strip appears thicker, but that’s because of the tactile OSD buttons located on the lower right of the cabinet.  The rest of the monitor uses sleek lines and slimmed down curves, although the rear panel has a slight bulge due to the internal power brick. The indention under the lower half hides almost all of the connectors for the Dell U2518D, making it easy to pass the wires through the hole and tuck them neatly.

The Dell U2518D is marketed as a multi-purpose display for the home or office, so it comes well-equipped with any connector you might need. The package comes with DisplayPort 1.2, Mini DP 1.2, and HDMI 2.0 for video signals, but you also get a DisplayPort out with MST for daisy chaining multiple units. There is a total of five USB 3.0 slots for convenience, with three hidden with the I/O layout while the two with fast charging abilities are placed on the side as a hub.

We can’t find anything negative to say about the functionality and build quality of this model, and that statement incredibly applies to the included stand. You get a height adjustment of up to five inches, plus tilt, swivel, and pivot for that perfect view angle. The sleek upright handles these articulations with smoothness and ease, plus the square base is sufficient in keeping the whole product steady. If in any case, you would prefer to wall mount the Dell U2518D, you can easily do so by separating the stand via a quick-detach button to reveal the VESA 100 x 100 bolt pattern.

The Dell U2518D features a 25-inch IPS panel with a 2560 x 1440 resolution, 60Hz refresh rate, and 5ms response time. Like most of Dell’s display products, this model comes with a 3H hard coat AG treatment which appears matte, but doesn’t affect vibrancy or add graininess. The only item we noticed in the spec list is the low maximum brightness of 350cd/m2 and the exclusion of FALD, whereas true HDR displays should have at least a thousand plus multiple dimming zones.

What fantastic about the Dell U2518D is it’s out of the box performance in Standard Mode, which does not need any tweaking save for comfortable brightness levels. sRGB gamut coverage sits at 100% with good accuracy except some extra vibrancy in the greens. This result is matched by an average contrast of around 950:1 at 20% to 40% brightness, resulting in deep, oily blacks and balanced whites. Overall, images appear lifelike and eye-popping as they should on a high-quality IPS screen.

These notable findings are a testament as to how Dell factory-calibrated their monitors, which often provide superb out of the box performance. Asking for minuscule improvements by calibrating would require a colorimeter, but buying one just for the sake of extra points which won’t net you significant improvements is impractical. Couple these scores with the 117 pixels per inch, and you get crisp and vibrant images with clean lines and details providing a visual fiesta for any type of user.

Panel quality is excellent as well since our tests did not reveal deviances going over 5% to the sides of the screen. Although we saw minimal backlight bleeding at the corners, it wasn’t enough to affect images including darker scenes in our Game tests. But remember, this aspect might vary from unit to unit since the IPS lottery concept applies.

Despite being a mix-use monitor more than a cutting-edge gaming display, the Dell U2518D provides decent performance making it suitable for after-hours warriors. This model only posted 6ms of response time, putting it close to some of the best E-Sports models out in the market. Although the slower pixel response time did create some blurring and interlacing issues, we could not have that against a product that biases towards the prosumer category more than the entertainment side.

Finally, as mentioned, the Dell U2518D includes HDR compatibility among its features. It does not carry hardware-based capability, suggesting that its HDR features are software implemented. We ran into some issues with testing since some games blacked out once launched when HDR is activated. The problem persisted with different titles, but fully compatible games like Mass Effect Andromeda launched without hanging or blacking out.

But the biggest issue with the Dell U2518D is when you finally get its Smart HDR feature to work with your compatible game, colors become dull. Images appear as if the Gamma dropped, creating a bland image which looked like it had an Instagram filter. We are not sure why it resulted in this, and there could be different factors such as the GPU, the OS, or the game itself. The Dell U2518D is an excellent monitor overall, but its lackluster HDR performance is a deal breaker.

The Dell U2518D has the makings of a good all-around monitor with its excellent imaging performance, perfectly responsive function, and reliable quality. The product is well-made, and there is nothing bad we can say about its factory calibration, which makes it ideal for out of the box use. Despite being marketed as a productivity or general-purpose display, the gaming capabilities make it hard to ignore.

On the other hand, we are disappointed that the Dell U2518D’s main selling point which is its HDR compatibility didn’t turn out so well. The unexplainable bugs which included blackouts when launching some titles are troublesome, but the biggest downer is the dull color. HDR is supposed to enhance vibrancy and contrast exponentially, but in this model’s case, it’s the opposite. The price is a bit heavy as well since adding a few more bucks could get you a FreeSync or G-Sync equipped model which could provide better enhancement over this model’s promised HDR enhancement.