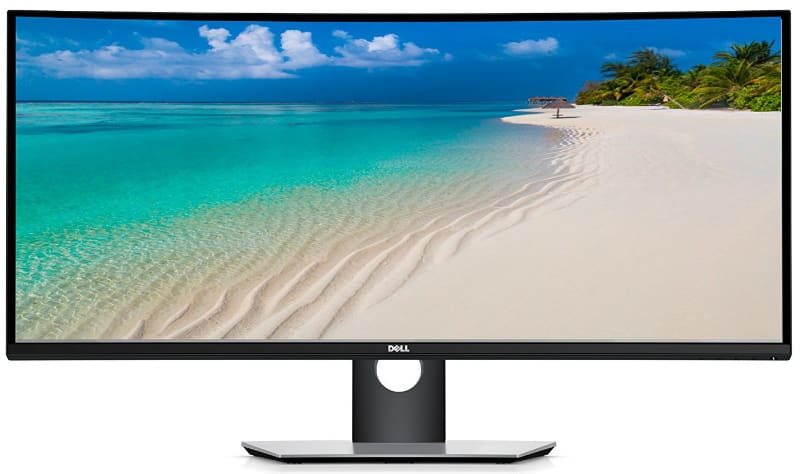 The Dell U3417W offers a large IPS screen that includes the brand’s signature factory calibration for outstanding color and image quality. This product targets business and professional users, but it’also capable of providing a high-end casual gaming experience on the side. The Dell U3417W now offers premium features at a reduced price, but what makes it excellent enough to receive praise from owners? 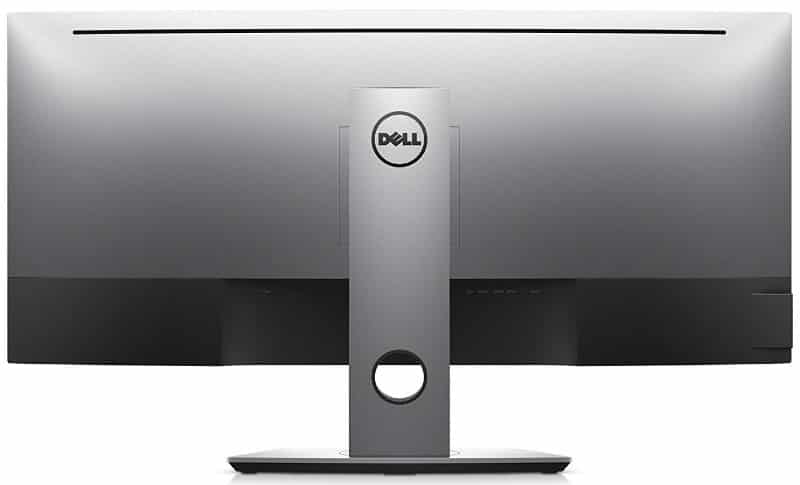 The Dell U3417W sports the brand’s premium, all-business attire composed of matte black and gunmetal finishes. The monitor feels sturdy and has clean lines and seams which signifies the brand’s care for build quality and craftsmanship. The screen isn’t bezel-free, but the borders are almost non-existent against the massive viewing space offered by this device.

Another staple feature of Dell monitors is the fully-articulated stand that lets you tilt, swivel, and adjust the height of the Dell U3417W. The placement of the upright’s swivel joint at the rear part of the base will enable users to push the monitor closer to a wall for more space. The mechanism is also completely removable if you prefer a VESA mount or adapter for your personal setup. 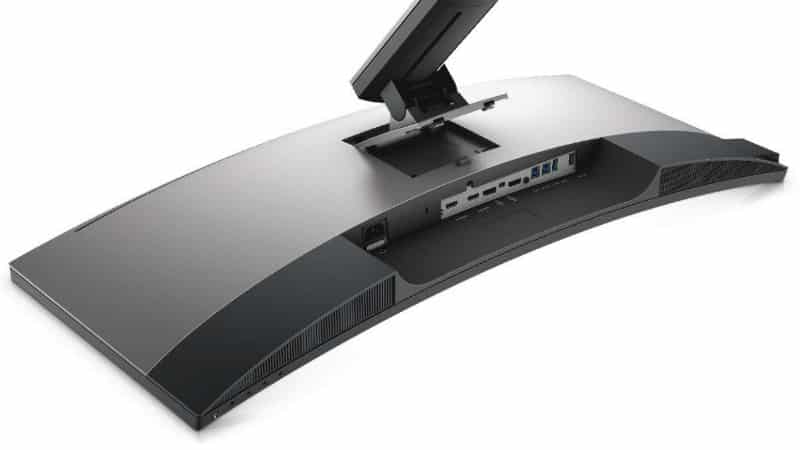 One of the key aspects of the Dell U3417W is its well-equipped I/O panel which includes almost every port you will need. The layout includes DisplayPort 1.2, Mini DP, and a DP Out for daisy-chaining another display. There is also a pair of HDMI 2.0 connectors for other host devices and six USB 3.0 slots for accessories.

The connector layout on the Dell U3417W will allow users to use it as a display for two computers. This capability is complemented by PIP/PBP modes, and USB port switching. The latter will distribute the USB hub’s input/output to separate devices for your convenience.

The only thing that bothers us is the Dell U3417W’s five-button layout for the power and OSD. We’re pretty sure that by now, most of us are used to controlling a monitor’s functions with a JOG button which is far less confusing to use.

The Dell U3417W also includes a pair of 9-watt speakers which are unusually powerful for a built-in set. It isn’t as detailed or crisp as a dedicated headphone, but it packs enough oomph for movies, videos, and background music.

The Dell U3417W sports a 34-inch AH-IPS panel from LG with a 3440 x 1440 resolution, 60Hz refresh rate, and 5ms response time. Other typical specs include a 300cd/m2 brightness and a 1000:1 contrast ratio. The module is capable of 10-bit color (via FRC), enabling a wider range of shades and tones for better accuracy.

Out of the box, there is little need to calibrate the Dell U3417W since it posts decent scores. The monitor hits 98% Adobe RGB with a DeltaE of 2.4 by default which is excellent for a mixed-use display. Gamma needs a bit of a touch up at 2.10, but the screen already looks close to the ideal D65 standard.

For simple use, you can select the Standard, Custom, and Multimedia presets available to the Dell U3417W via its OSD. Calibrating the display is also beneficial even if it has already received tweaks from the factory. You can push the screen’s accuracy to DeltaE .80 to minimize variances and correct the slightly cooler hue.

This will correct Gamma slightly to 2.15 to put the temperature closer to the 6500K target. Despite these adjustments, theDell U3417W still looked a bit washed when viewing certain colors or images. The contrast hits 900:1, so we suspect this is due to the Gamma which refuses to fall in line.

Another aspect of the Dell U3417W that could use some improvements its panel uniformity for both brightness and color. The backlight softens and slightly bleeds son the corners and the sides, revealing imperfections in some shades and colors. This also had an effect on black or dark images, lessening the depth of the image.

Users won’t usually notice this flaw since you’d have to stare at the corners of the monitor to discern the difference. It’s quite difficult to unsee them, but they become less apparent when watching movies or playing games. Take note that panel quality varies from unit to unit so the IPS lottery concept applies here.

The Dell U3417W’s pixel response time is slower than gamer variants, but we think it handles motion quite well. It’s not as smooth as a 100Hz display, but there is less blurring or ghosting except in considerable to extreme circumstances. The most significant limitation here is the 60Hz refresh rate more than the 5ms Dell plastered onto the packaging.

One thing the Dell U3417W lacking is the addition of FreeSync for AMD GPU users who want buttery-smooth visuals. We can understand that this is a mixed-use/business display, but FreeSync is readily available and compatible with the monitor’s functions. The refresh rate is basic, but the 3440 x 1440 resolution will still require a considerably powerful GPU to keep frames stable.

Finally, the Dell U3417W feels responsive enough for gaming since it only has an input lag average of 17ms. It isn’t as minimal like the numbers we’ve seen on gaming variants, but there will be no noticeable delays or a “de-synced” feel. Again, the most considerable limitation of this model for enjoying games would be its limited refresh rate.

Thoughts on the Dell U3417W

The Dell U3417W is a refined, high-quality monitor that’s worthy of praise but at the same time, would need a few tweaks. The image quality from the LG panel is excellent even if left at default, providing lifelike colors and decent vibrancy. The only imperfections haunting the review unit is the stubbornly low gamma and the panel uniformity which added a washed out effect on the output.

The Dell U3417W is also capable of providing an excellent experience for your after-hours sessions. The monitor is responsive enough for competitive play, but there are substantially better models focused on this endeavor. If you need a monitor for mixed use, the Dell U3417W is well worth its currently reasonable price.