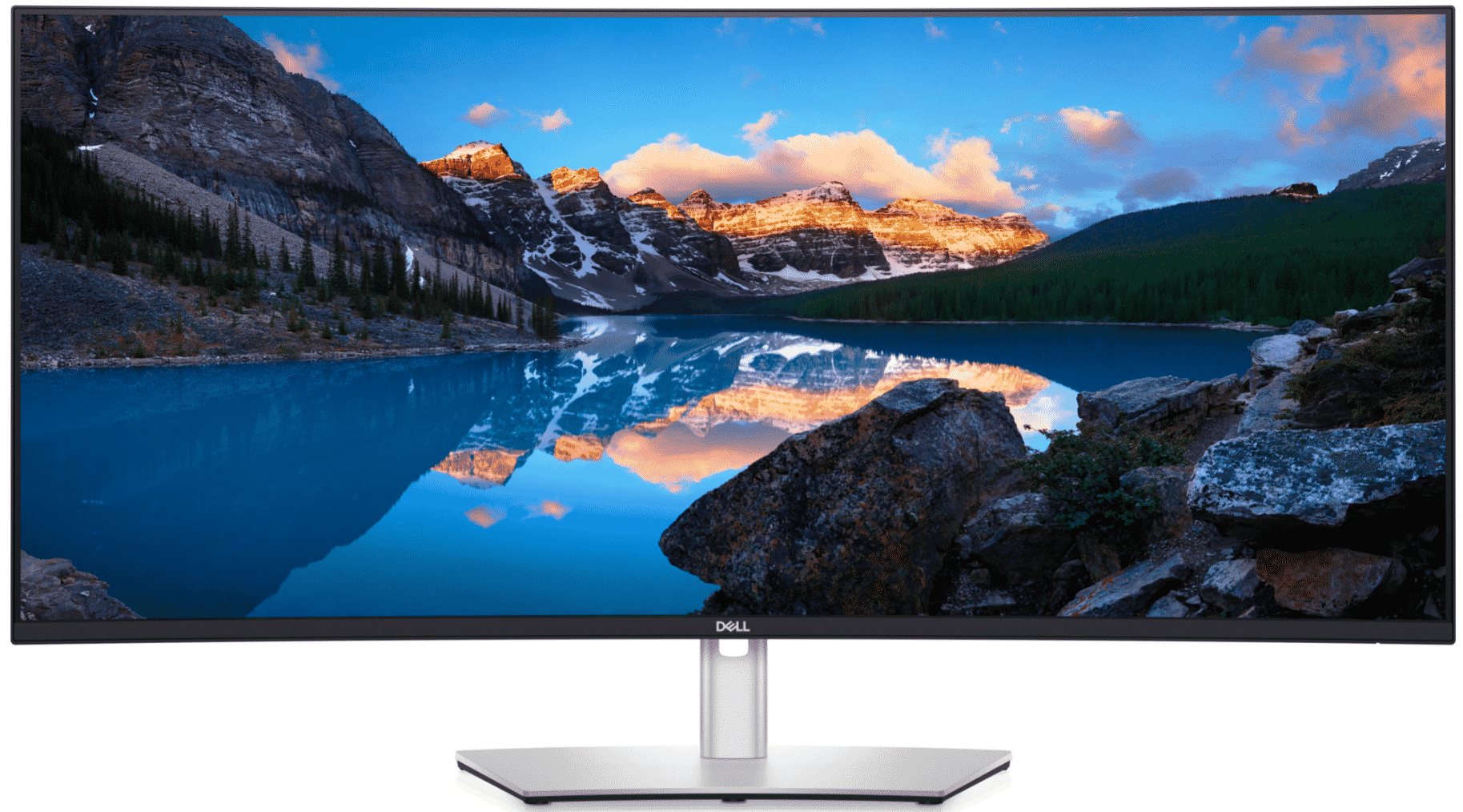 The Dell U4021QW is an all-new premium monitor with a unique 5K-2K WUHD screen format and some sought-after features. It’s your best bet if you want the sharpness of a 4K screen but would rather go beyond the usual 16:9 aspect ratio. The Dell U4021QW isn’t cheap, so let’s take a closer look to determine if it’s worth the investment. 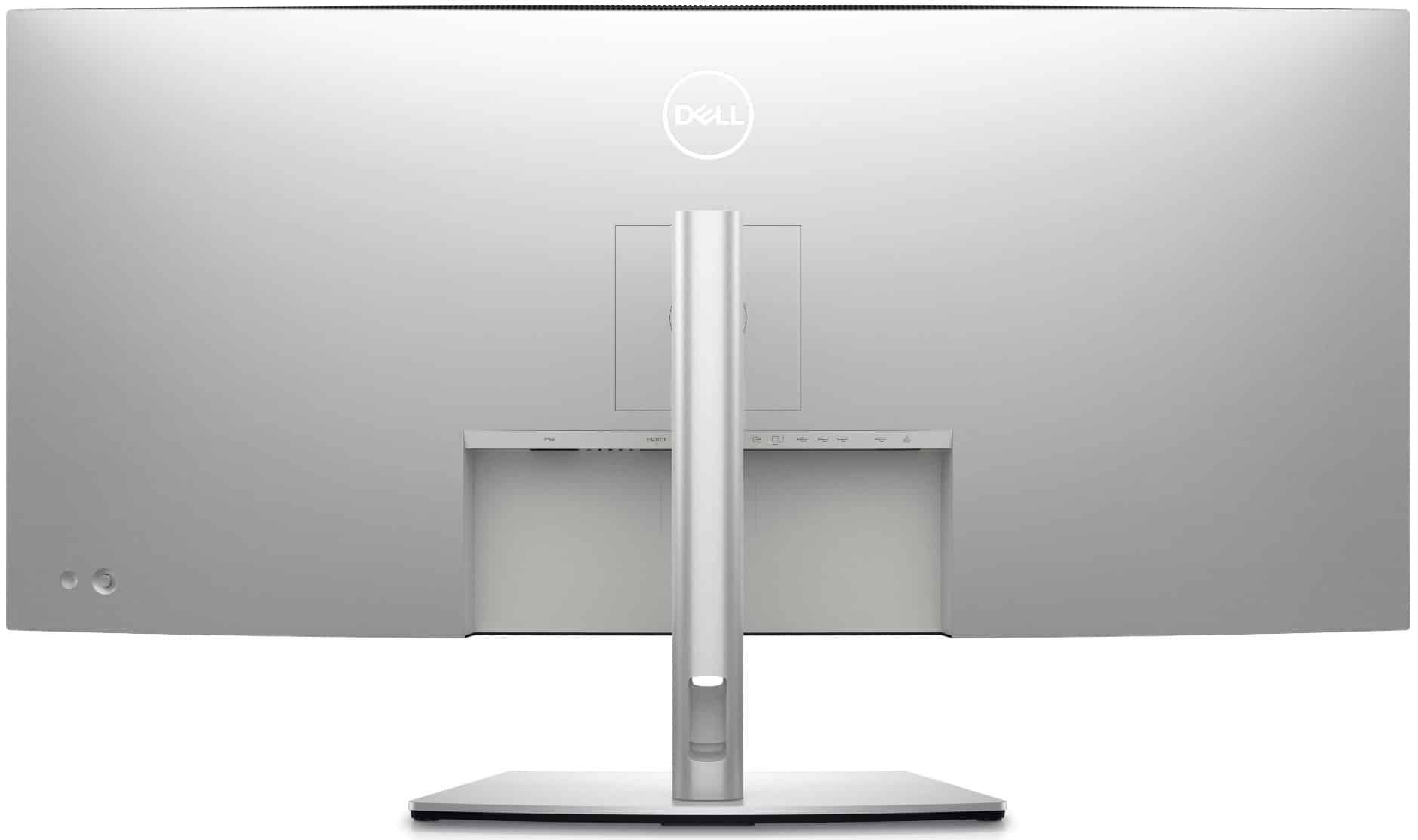 The Dell U4021QW follows the aesthetic concept of the brand’s product line, but what makes it unique is its shape and its aspect ratio. The monitor has a matte silver aesthetic mixed with some black on its bezels which give it a business-oriented appeal. The display is bezel-free on three sides, but you will still see inner borders when its in use.

The Dell U4021QW is quite big for a monitor since it breaches 3 feet of width although the depth it needs is a bit modest compared to older variants. As with many ultrawides, you need to clear some space since the extra width can interfere with bookshelf speakers and other peripherals. It also weighs a little over 30 pounds so it’s not easy to carry around or unbox by yourself.

It’s mostly made out of plastic, but the Dell U4021QW feels durable and well-built just like many of Dell’s premium monitors. The stand offers excellent stability with excellent footing, so it won’t wobble or slip and slide even if you have a glass surface. It’s well worth the price in this regard and it should last quite a while.

The Dell U4021QW has a joystick next to a power button for easy access and OSD navigation. It’s also compatible with Dell Display Manager, so there are other ways to make use of its features and capabilities. The joystick is located on the lower corner of the screen so it can be a chore to reach, but it’s still easier and quicker to use compared to buttons.

The stand included with the Dell U4021QW offers tilt, swivel, pivot, and height adjustments, so it’s possible to get a comfortable view. You can’t pivot the screen, but that’s ok since this is a curved ultrawide monitor which isn’t ideal for portrait viewing. You can also opt for VESA mounts with 100 x 100 patterns, but it’s only necessary if you need the space or if you are building a multi-monitor array.

Connectivity is one of the most impressive aspects of the Dell U4021QW which has plenty of options to suit your techie needs. You get DisplayPort 1.4 and two HDMI 2.0 slots, along with a 90-Watt USB-C Thunderbolt 3 for single cable operation with the latest laptops. You will also find a 15-watt USB-C slot and five USB 3.2 ports for peripherals and speedy transfers.

There is also an RJ45 jack for network management and a 3.5mm analog port for speakers and headsets. Take note that the included USB-C cable for the Dell U4021QW isn’t rated for Thunderbolt 3 operation, so you have to buy that separately if you want the full bandwidth.

The Dell U4021QW also has a pair of 9-watt speakers which are considerably more powerful than most built-ins in the market. They sound great for music and movies, so you can turn off your desktop bookshelf speakers or put down your headsets. They don’t pack rumbling bass, but they will sound satisfying compared to other monitor speakers you’ve tried.

The Dell U4021QW sports a 40-inch 2500r curved IPS panel with a 5120 x 2160 WUHD resolution, a 60Hz refresh rate, and a 5ms response time. The backlight has a 300 cd/m2 maximum while the contrast ratio is at 1000:1 which is common on most IPS panels. This model doesn’t support HDR, but it does offer an extended gamut that is suited for professional work.

the Dell U4021QW is the first 40-inch monitor we’ve reviewed but the 5120 x 2160 resolution isn’t new by today’s standards. It’s sharp and crisp, but it doesn’t miniaturize text and small objects like many 4K monitors, so you won’t struggle with legibility. It’s also great for entertainment and gaming, but unfortunately, this monitor doesn’t have features that support the latter.

The Dell U4021QW covers more than 100% of the sRGB gamut and around 90% Adobe RGB for rich colors and saturation. It has an impeccable default color accuracy with a low deltaE average of only 1.02. Most users won’t need to calibrate this model unless it’s going to be used for color grading or photo editing.

Using a colorimeter on the Dell U4021QW improved its dE average to 0.35 which is one of the best results we’ve seen so far. There is very little improvement for regular use, but photographers and content creators will love this kind of performance. However, most users will be satisfied with the default plus a few tweaks, so buying a colorimeter if you don’t have one yet isn’t necessary or practical.

The Dell U4021QW only managed to reach 290 cd/m2, but that’s plenty for daily use even if your room has some natural light coming in. what failed to impress was its contrast ratio which peaked at 955:1 at 60% brightness. The screen can look washed out when it puts out dark scenes due to the high black luminance, especially when it’s used in the dark.

Panel uniformity for the Dell U4021QW could use some improvements since some quadrants have clouding issues when displaying a black image. It’s not noticeable in full-color, but some scenes like when a game loads up will reveal the flaws. Thankfully, this isn’t permanent across the entire range since there manufacturing tolerances and a high probability of getting a better specimen.

Pixel response times for the Dell U4021QW are acceptable, but it’s only suitable for casual gaming or single-player titles. The screen shows some blurring and persistence, so you need to use its overdrive to help curb the issue. We can only recommend the Normal setting since anything higher will induce overshoot that is more noticeable than the smudges.

Sadly, the Dell U4021QW doesn’t have VRR compatibility so you can’t rely on FreeSync or G-Sync to keep games smooth. The monitor has a very high resolution, so many cards will not be able to produce the full 60FPS at a stable rate. Input lag is at 9ms at 60Hz, so there is no need to worry about delays while using the monitor.

Thoughts on the Dell U4021QW

The Dell U4021QW is an attractive option for business users and content creators or editors who want a robust and premium screen. The 5K 2K WUHD display provides plenty of space and crispness, so you will always find it pleasing to look at. The color accuracy out of the box is fantastic, but calibrated results are even better especially if you use a colorimeter.

However, the Dell U4021QW is quite expensive even if it’s well-equipped with Thunderbolt 3 tech and other sweet add-ons. It also doesn’t support VRR, so it leaves out a large audience that might want a work from home monitor that can game smoothly. it’s a hard pill to swallow for many, but you can rest assured that it will look great for editing or work from home use.