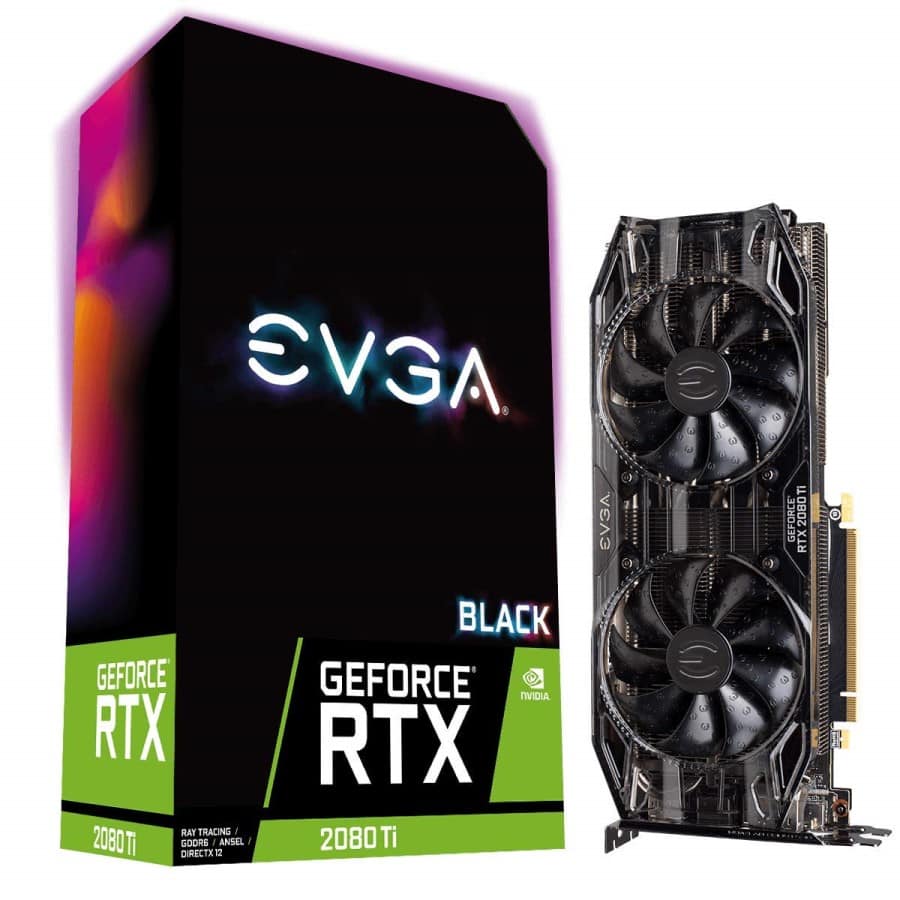 The EVGA RTX 2080 Ti Black Edition offers a unique design and everything the latest Turing GPUs can do in a substantially more affordable package. The brand is a favorite in the gaming community when it comes to GPUs and motherboards, but what makes them stand out is their fantastic customer service. The EVGA RTX 2080 Ti Black Edition is the most affordable 2080 Ti to date, but is it the perfect card for high-end gaming? 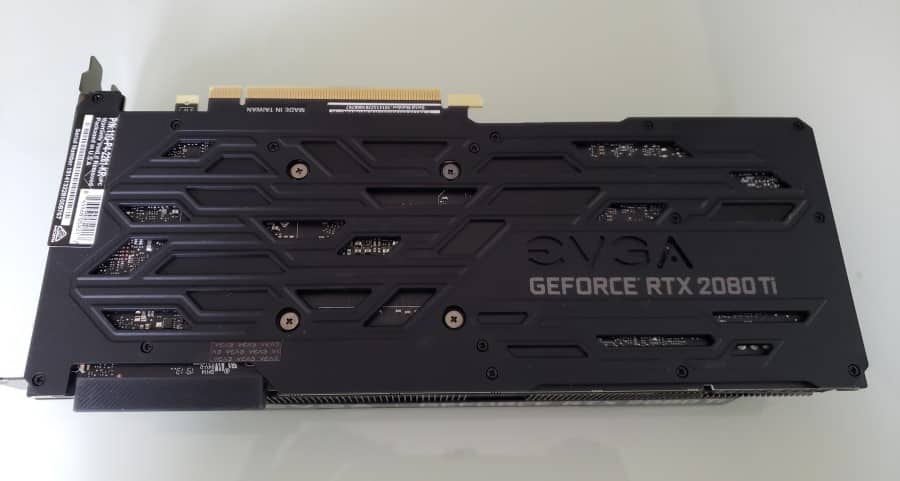 The brand went bold with the EVGA RTX 2080 Ti’s design, option for a translucent shroud for the dual-slot cooler. It’s effect which slightly diffuses the RGB lighting that leaks into the heatsinks a nice touch, whether if your case is lit with LED strips or not. However, we think that the look is still subjective since based on feedback, not everyone digs the new design.

Each of the fans has nine blades, and they are designed for maximum air pressure and volume in a compact space. What we disliked about it isn’t the performance or noise, but rather, the Evga logo pimpled over the blades which look unnerving when the fan is at full stop. They also tend to get buzzy at full speed, which you will find yourself often using if you want to keep temperatures within the sixty-degree range.

The EVGA RTX 2080 Ti Black Edition is part of their lower-tier offerings for the 2080 Ti, so it only comes with a dual-fan cooler with a two-slot, full-length heatsink. This aspect isn’t necessarily bad since it falls in line with the Founder’s Edition’s design, but it will yield higher temperature deltas than the FTW3 variants. As we all know, modern GPUs tend to throttle down once their temps reach around the 50 degrees mark to help manage the device’s safety and longevity.

You will need two 8-pin PCIe power cables from a quality 650-Watt power supply, according to EVGA’s recommendations. Personally, we’d go with at least an 850-Watt, so you still have headroom for overclocking your CPU. Make sure you use separate PCIe slots and cables on the PSU because those dual-headed cables in a single slot will not be able to handle the EVGA RTX 2080 Ti Black Edition’s amperage.

The EVGA RTX 2080 Ti Black Edition will support up to four monitors with its bandwidth and connectivity options, making it a fantastic choice for multi-head setups. The card supports up to an 8K resolution, giving you plenty of options when it comes to monitor shopping. The layout at the rear includes three DisplayPort slots, a single HDMI slot, and a USB-C port for monitors that support the standard.

This card isn’t the biggest in the lineup, but make sure you have at least 11 inches of GPU clearance in your case. It’s a two-slot GPU, but it still slightly sags due to its size and weight. We recommend using a GPU bracket with this model which will take care of the slack that is annoying to look at.

The EVGA RTX 2080 Ti Black Edition with an Nvidia Turing TU102-300 chip, 11 GB of GDDR6 memory, and a 384-bit bus. It’s well documented that the GPU used in this model is a tier lower than the A variants which were meant for factory-overclocked AIBs since they can clock higher. There is no difference in features since the non-A chip still carries the same amount of CUDA and Tensor Cores, plus you can still overclock it even if it has a smaller headroom.

This model is based on the RTX 2080 Ti Founder’s Edition PCB design, so aftermarket coolers made for the series will be compatible with the model. It’s also rather easy to find a water block for the card if you want to go that route, which is viable considering that this is the cheapest RTX 2080 Ti available.

We tested the EVGA RTX 2080 Ti Black Edition with an EVGA Z370 Classified K motherboard carrying a 5.0 GHz-overclocked Intel Core i7 8700K and 32 GB of Corsair Dominator Platinum RGB DDR4 3200 MHz RAM. Battlefield V is set to run at maximum settings in 1440p using an Asus PG278QR 165Hz G-Sync gaming monitor to give you a basis of how powerful it is in a typical high-end gaming setup. BFV is well-optimized for Nvidia’s GPUs and its new Ray Tracing technologies, so its a good place to start.

At 1440p, The EVGA RTX 2080 Ti Black Edition runs at 98%-99% utilization in Battlefield V. DX12 framerate is consistent at around 120 FPS, dipping down to around 110 FPS in some instances where the game becomes intense. This is a fantastic result considering BFV’s Frostbite engine is one of the more demanding platforms in the market due to its complex capabilities.

The game runs smooth and without hiccups thanks to the EVGA RTX 2080 Ti Black Edition’s power and the monitor’s G-Sync feature which comes in handy here. Many believe that the VRR tech becomes unnecessary with a top-tier card, but it’s still crucial to smooth gameplay since frames rarely stay steady. The GPU’s DLSS technology also had a helping hand in keep frames consistently above 100 FPS at 1440p, which we think, is the whole point of buying into top-tier cards other than 4K gaming.

Activating Ray Tracing is a different story since it drops the framerate output of any RTX card like the EVGA RTX 2080 Ti Black Edition. Massive performance penalties were apparent in exchange for convincing reflections and light blooms. The average framerate sat at 84FPS, but we saw dips as low as 73 FPS with this setup. However, this is still satisfactory since you are safe from dipping below the 60Hz threshold, which is the absolute minimum if you want smoother gameplay.

Temperature results are where the EVGA RTX 2080 Ti Black Edition will start to show the cons of its lower price. It’s a lower-clocking chip compared to the XC or FTW3 versions, but we think the more significant concern here is the temperature capacity of the cooler which will affect how the card will run. The GPU runs at 80 degrees using EVGA’s stock fan curve while it was maxed out by Battlefield V, but it sometimes reached 83 degrees in our Ray Tracing test.

You can lower it to around the 67-Degree mark by running the fans at 100%, but the noise can become troublesome if you don’t use headsets. You don’t have to since the GPU is rated to run at a max of 88 degrees, but setting a more aggressive fan curve via Precision X1 is a wise choice. The sweet spot is to stay below 80 degrees to ensure that the expensive graphics card doesn’t burn out or die prematurely.

The EVGA RTX 2080 Ti Black Edition is the best value option in the RTX 2080 Ti line up which goes for as much as $1799 in the current market. For around $999, you get to enjoy a top-tier card that can produce 100+ FPS in 1440p and approximately 70 FPS in 4K without paying for the extras of the top-tier variants. We like the minimalist design of the cooler and its LED lighting-diffusing effects, but we know many will hate the EVGA logo pimples on the fans.

The biggest issue with the EVGA RTX 2080 Ti Black Edition isn’t its limited overclocking headroom or basic factory clocks. Our primary concern with this card is its temperature, which is too close for comfort to the rated maximum. You can work around it by finding a fan curve sweet spot, or you can replace the stock cooler with a GPU AIO or a water block in the near future.

But frankly, with all complaints aside, the EVGA RTX 2080 Ti Black Edition is the best bang for your buck if you want a Ti card for 1440p or 4K. Its relatively low pricing makes it easier to swallow the upgrade cost, plus its a great choice if you want to go with exotic water cooled setup or dual GPU with Nvidia’s NVLink.