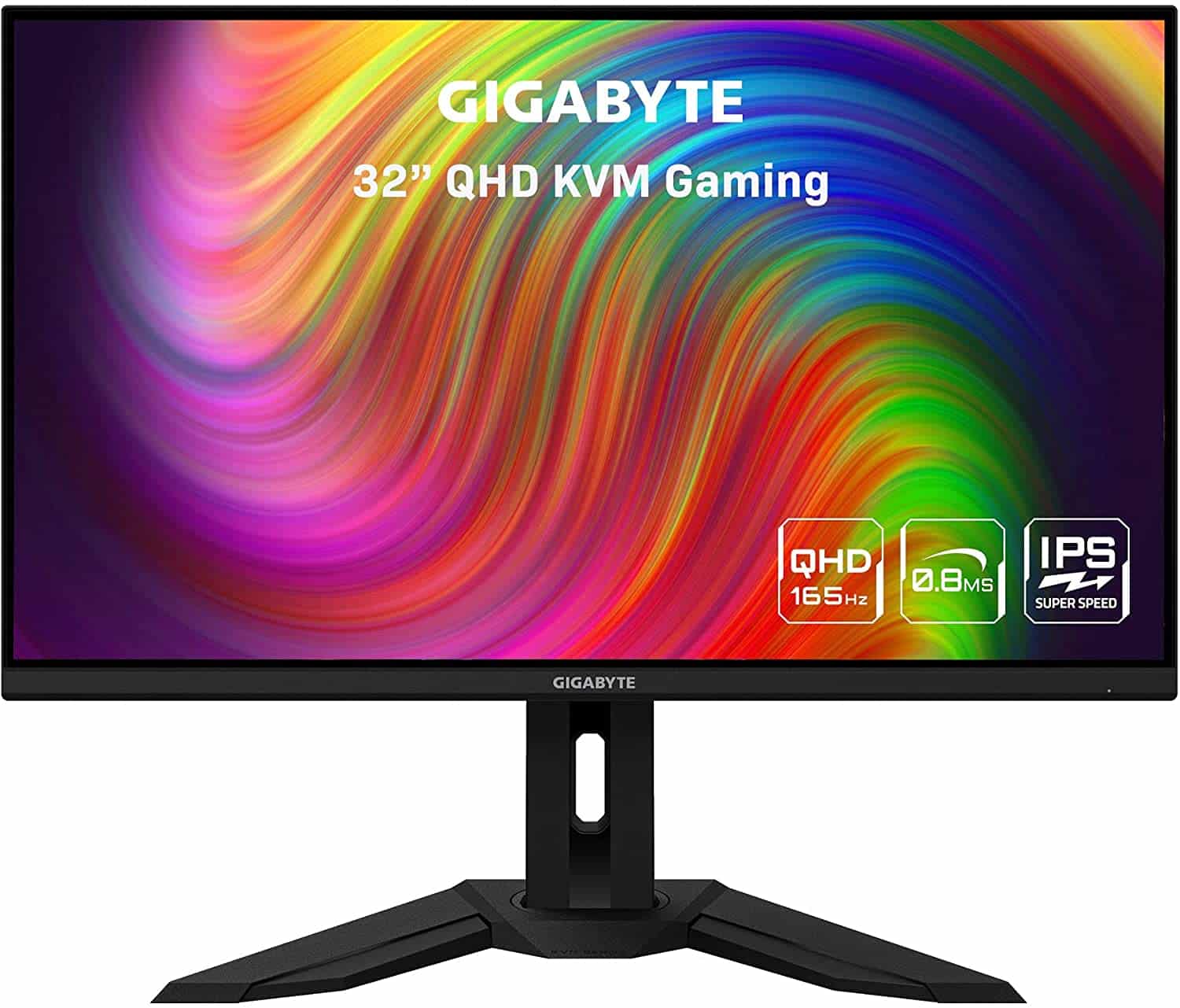 The Gigabyte M32Q is an attractive $400 gaming monitor with a large, 32-inch screen and an extended 170Hz refresh rate. It follows the trend of its sibling, the G32QC, but this newer model is flat and doesn’t use VA technology. Let’s check out if the Gigabyte M32Q is a worthy choice over its limited competition, including Its VA alternatives from the brand. 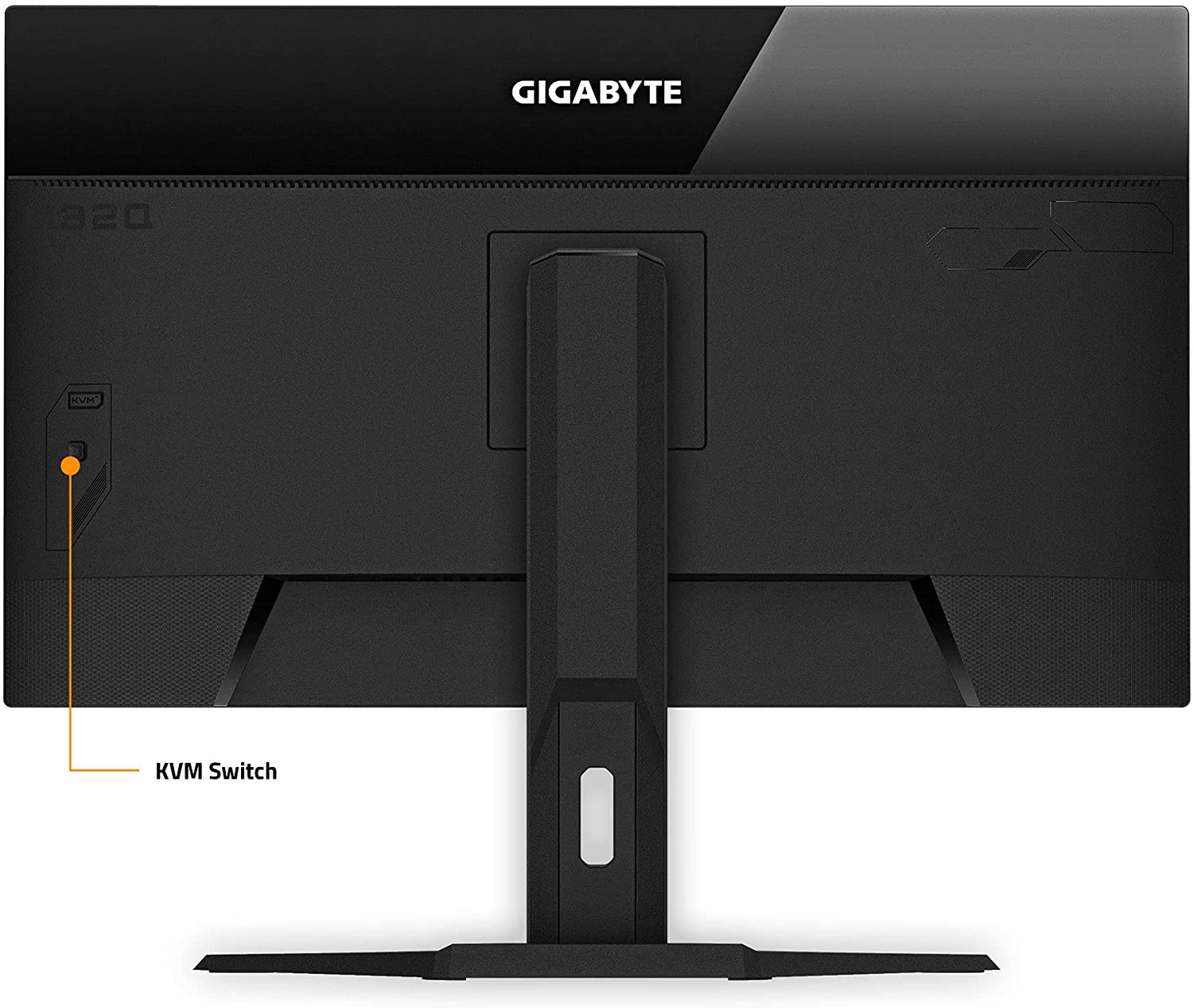 The Gigabyte M32Q adopts the same aesthetic principles as the M27Q and the others in the G-series line up such as the G27Q. It uses a plain-jane matte black chassis that doesn’t have many decorative features. It will age well because of that, especially since it’s bezel-free on three sides with minimal inner borders.

You have to consider this monitor’s size, especially its base and width which can bump off your other peripherals. It’s 28.2 inches wide and almost 10 inches deep when fully assembled, so plan your purchase and setup well before pulling the trigger. It’s quite heavy at 22.5 pounds, so don’t hesitate to ask for help and follow the assembly instructions to avoid damage to the panel.

Build quality is great for the Gigabyte M32Q even if can be considered a budget-friendly model. The plastics used aren’t fragile and they are free from cosmetic defects. The weight comes from the reinforcement inserts, so you’ll know that it will not fail or break apart structurally just like that. There is some slight wobbling, but it only happens if you accidentally nudge the screen with enough force.

The Gigabyte M32Q, like the rest of the brand’s gaming monitors, have very easy-to-use joysticks for their OSD. The OSD itself is quite easy to navigate and understand, so having a tool that lets you manipulate it quicker will save time in the long run. The dedicated button is for its KVM feature which lets you switch to another host device and control it using the same set of peripherals.

The stand included with the Gigabyte M32Q offers tilt, swivel, and height adjustments for your convenience. It’s always easy to get a comfortable viewing angle with this model, although portrait mode is out of the question. You can opt for a VESA mount to get rid of the gigantic base, but it’s only truly necessary if space is limited or if you have multiple screens on your setup.

The Gigabyte M32Q beats most monitors in its price range and category when it comes to connectivity features. The monitor features DisplayPort 1.2, two HDMI 2.0 slots, and a USB-C port that supports DP Alt Mode and its KVM functionality. its downside, however, is its 15 Watts charging limit which can only top up mobile devices by today’s standards.

You also get a trio of USB 3.2 ports and a 3.5mm jack for your peripherals and drastically improved cable management. There is also a pair of 3-watt speakers in the mix, but they are only useful for conference calls and background music. Most gamers will still prefer headphones to better enjoy the monitor’s capabilities in games and movies.

The Gigabyte M32Q boasts a 32-inch IPS panel with a 2560 x 1440 resolution, 170Hz refresh rate, and a 0.8ms boosted response time. The backlight has a 350 cd/m2 typical rating and a 400 cd/m2 peak while the contrast ratio is still limited to 1000:1 like most IPS panels in the market. This model is capable of HDR400 performance, but we know that’s not enough to produce the true benefits of the technology.

32-inch 1440p monitors aren’t as sharp with with their 93 PPI, but that’s not too far off from the 27-inch variants which have 108 PPI. You still get the extra pixels with this model so games and programs will still look detailed and crisp. We agree that 4K is more suited to this size, but 1440p is easier on GPUs so high framerates that take advantage of the monitor are guaranteed.

The Gigabyte M32Q renders 100% of the sRGB gamut and around 90% DCI-P3 which fails to reach the brand’s claims but is more than decent for gaming. its default accuracy is excellent since the deltaE average is limited to 1.26. The screen looks good out of the box, so most users will be happy with only a few minor tweaks.

Calibrating the Gigabyte M32Q lowered its dE average to an excellent 0.59 which makes it usable for editing work. However, expensive colorimeters aren’t necessary for this model, unless you already have one in your kit. Most users won’t notice the improvements, so we can only recommend it if you do color-critical work.

The Gigabyte M32Q reached 348 cd/m2 in SDR and around 441 cd/m2 in HDR mode, while its contrast peaked at 1187:1. It’s bright enough for most tasks, although the backlight’s improvements in HDR such as enhanced details are minimal. The screen is still unable to produce deep blacks, but that’s acceptable for most IPS panels.

Panel uniformity for the Gigabyte M32Q could use some improvements since there were backlight leaks on the top and bottom edges of the screen. They show up in dark scenes or all-black images, but they aren’t as disturbing in full color. Take note that this issue varies between every monitor made due to the nature of IPS, so there are better units in the wild.

The Gigabyte M32Q has an excellent pixel response time since there’s practically no blurring or overshoot. You can use either the Balance or Picture Quality level of the monitor’s overdrive to enjoy its fantastic motion handling. Setting it any higher than these two will introduce overshoot, so there is no reason to push further.

The Gigabyte M32Q is a FreeSync monitor, but it also works with Nvidia’s G-Sync Compatible mode. This is a must-have feature nowadays since both GPU brands have compelling options and shortages are quite common. Input lag sits at 5ms at 170Hz, so there is no need to worry about delays while enjoying your favorite titles.

Thoughts on the Gigabyte M32Q

The Gigabyte M32Q is a prime choice if you want to game on a big screen without sacrificing image quality and speed. It doesn’t need calibration out of the box since it’s already quite accurate, so you only need to do minor tweaks to get your preferred output. It’s well-designed and blur-free, so it should last for hardcore gamers who enjoy competitive titles.

There’s very little to complain about with the Gigabyte M32Q, especially since it’s also suitable for productivity. it also has very few competitors with the same specs, and most are either old models or much more expensive. It’s a must-buy for gamers who don’t want to spend a big amount but would love an enjoyable and very capable gaming monitor.