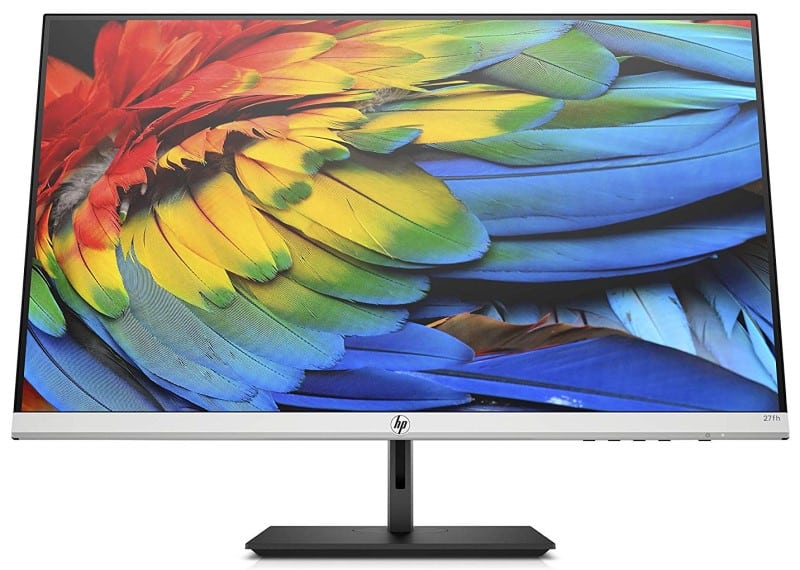 The HP 27FH offers a vivid IPS panel built into a thin, but durable frame that is designed to be reliable and long-lasting while being aesthetically pleasing. HP markets this model as a much more sophisticated alternative to your run-of-the-mill display at work, but high-refresh rates or extensive gamut coverage aren’t part of the package. The HP 27FH is at the upper ranks of pricing compared to its competition, but does it provide advantages that will make the extra premium worth every penny? 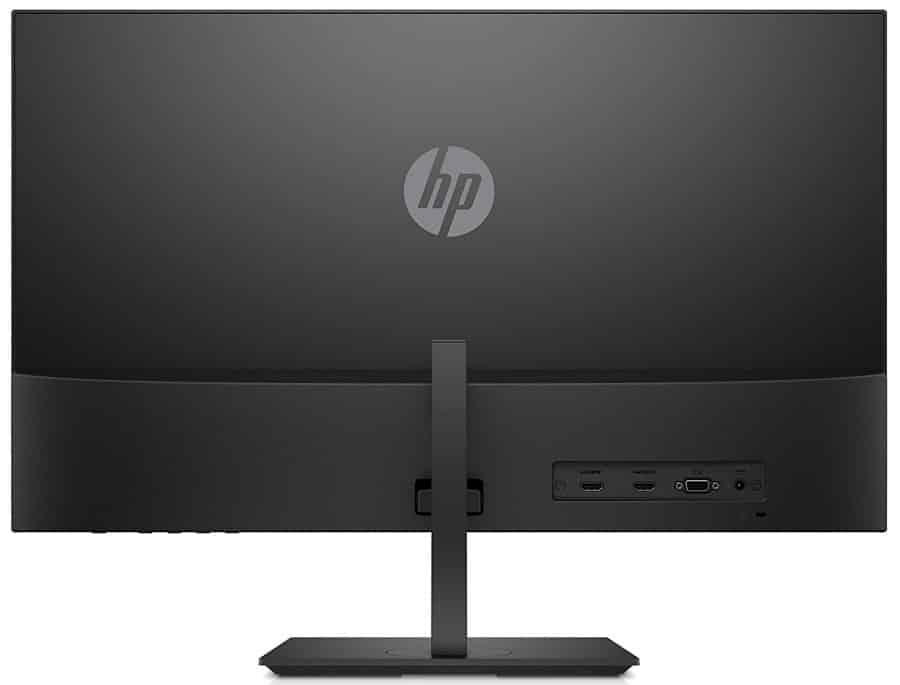 The HP 27FH follows the same aesthetic direction you would find on some of the brand’s latest products such as its Spectre Laptops. The minimalist design utilizes lightweight alloys for beauty and durability, along with polished resins that look attractive yet prone to scratching. The delicate device is bezel-free on three sides, but panel borders will still be present when the screen is in use.

The combination of matte silver on the front and black for the back works well in our opinion. The monitor’s quality control is beyond decent, since build quality is reasonable and the refinements are all intact. There are no uneven seams or roughness on the HP 27FH’s surfaces, indicating that extra care was added during the manufacturing process.

The HP 27FH belongs to the upmarket tier of 1080p monitors, but it still uses OSD buttons instead of a much more convenient joystick. The layout is located at the left corner of the bottom bezel, but it’s easy to mix them up if you use it in the dark. The buttons are clicky and responsive, but we consider this approach archaic, especially for a $200-plus 75Hz variant.

The HP 27FH has a sleek-looking black stand, but its ergonomics are limited to tilt and height adjustment. You’d need a VESA mount if you want more flexibility, but sadly, the display doesn’t have bolt holes since the thin frame cannot support it. There is an available aftermarket adapter for this series of monitors, but it will set you back another $27 or so.

The connectivity layout on the HP 27FH only consists of dual HDMI 1.4 slots and a VGA connector. Frankly, that makes sense since the resolution and refresh don’t need DisplayPort, but it would be nice to have since DP is now the current standard for most graphics cards. We also think that HP should have at least included a few USB slots to help the monitor make desktops become clutter-free.

The thin frame of the HP 27FH also omitted the possibility of built-in speakers which are sorely missed if you are paying this much. Headphones and speaker sets almost always sound better, but we think this model would have better marketing if it offered a more complete range of features.

The Hp 27HF offers a 27-inch IPS panel with a 1920 x 1080 resolution, 75Hz max refresh rate, and 5ms response time. The 300 cd/m2 backlight is sufficient for daily use, while the 1000:1 contrast ratio is typical to almost every IPS variant in the market. These aren’t gaming specifications, but the extra headroom is a nice-to-have capability which helps boost the screen’s output.

Monitors of this size is the absolute limit for the full HD resolution since this is where images start to become pixelized. The looser pixel pitch means details and sharpness are reduced, but it does improve overall visibility. Competitive gamers like this characteristic since it makes small objects easier to see, but it doesn’t look great if you sit too close to the screen.

The HP 27FH managed to reach 96% of the sRGB color space which is more than some of the identical models we’ve tested can do. Accuracy, however, is dismal at 3.2, showing off some miscolorations in blues and greens. A colorimeter can bring this down to a much more ideal DE 2.1, but buying the gadget as an additional isn’t worth it.

The screen is also too warm for most tastes, but its a distinct characteristic of a vivid sRGB screen. Still, the HP 27FH would benefit a lot from calibration to correct this issue, especially if creamy whites annoy you.

The contrast ratio of the HP 27FH maxes out at 850:1 with a few minor adjustments, but it isn’t sufficient in bringing down the luminance of blacks. The screen looks grayish in darker rooms plus, it reduces the vibrancy of the screen. We know for a fact that gamers will dislike this characteristic, especially those who prefer immersive titles which are most suitable for this variant.

Panel uniformity isn’t perfect, but it’s one of the best characteristics of the HP 27FH test unit. There is a slight leak at the bottom left corner, but it did little to affect the screen once its playing colored images. Putting an all-black image will reveal the flaw, but situations that appear like that aren’t common.

Motion handling on the HP 27FH is decent for a 75Hz model thanks to the extra headroom in refresh rate and a decent pixel response time. The monitor’s overdrive takes care of the ghosting and smudges with ease, but it’s maximum setting which reaches the specified GtG time will induce too much overshoot. We recommend setting it to its optimal state if the default output produces some noticeable blurring.

The HP 27FH is a FreeSync gaming monitor which makes it a great pair for AMD’s midrange GPU kings like the RX 580. Technically, the monitor should be G-Sync compatible, but it’s not tested and certified so functionality isn’t guaranteed. Input lag sits at 10ms, so there are no delays in games.

Thoughts on the HP 27FH

The HP 27FH is a beautifully-designed IPS monitor that’s great for making your workstation pretty and sophisticated. The screen’s ratings are decent, but its flaws will require a colorimeter if you want to fully correct them. Gaming performance is above average, and only a 144Hz variant will be considerably better.

The HP 27FH’s biggest caveat is its pricing, which is usually reserved for specifically tuned display products. The device is ideal for mixed use, but its limitations make it less suitable as a dedicated display for either gaming or color-critical work. It’s also confusing that HP made so many variants of this series, so reading the spec sheet or reviews is a must before you pull the trigger.