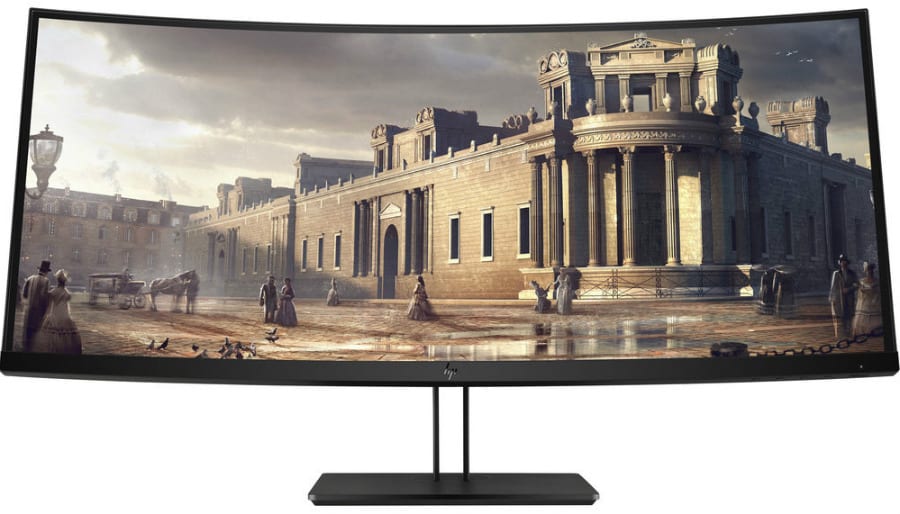 The HP Z38c is a beautifully-designed business monitor that comes with an immersive screen and a bespoke industrial look that suits sophisticated professionals. The screen size makes this model perfect for a single display solution for multitaskers who want to have multiple windows open in an instance.  Ultrawides always draw attention in the office.  Let’s check out if the HP Z38c can extend its awesomeness into other categories of PC usage to maximize its premium price tag. 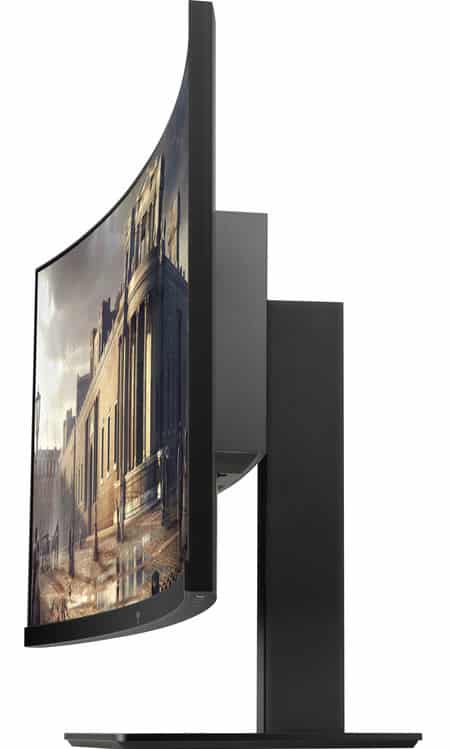 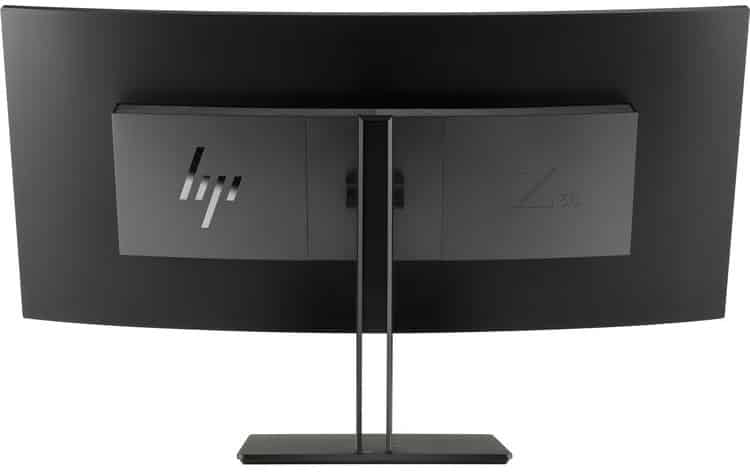 We dare say that the HP Z38c is easily the best-looking 38-inch monitor thanks to its minimalist design which marks its sophisticated purpose. This model boasts a graphite black chassis with aluminum panels that give it a premium feel over its plastic-clad counterparts. One downside we see with the material choice is it adds a bit weight, making this monitor almost five pounds heavier than its competitors.

The HP Z38c also features a Micro-edge bezel design on three sides which is composed of a thin outer layer and black panel borders. The upper and peripheral frames are nearly unnoticeable when the screen is in use, giving users a maximized view of the massive display. The bottom is almost an inch thick, but it does look attractive thanks to the excellent material and the renewed HP logo at the center.

Another aspect we love on the HP Z38c is its stand which looks like it was forged by an expert blacksmith. The mechanism is made up of two flat bars and a squarish base which do a great job of keeping the monitor upright while looking sexy. Ergonomics isn’t an issue as well since you can tilt, swivel, and adjust the height to get the perfect view angle.

Flexibility is a crucial term to describe the HP Z38c because aside from its ergonomics, you can configure it in multiple ways. The massive monitor is also VESA mountable so that you can opt for a more articulated aftermarket solution. The monitor is also compatible with the B500 PC mounting bracket (sold separately) which essentially allows users to attach an ITX PC to the back to make this model an AIO.

Connectivity for the HP Z38c is also at a premium level thanks to the multitude of options which will make the modern executive swoon. The I/O layout includes DisplayPort 1.2 and HDMI 2.0 for video inputs, along with four USB 3.0 slots for accessories. However, the standout receptacle here is the USB-C slot which can provide up to 65-Watts of power for your MacBook or other similar USB-C laptops.

The only complaint we have for the HP Z38c is it does not include speakers for the price. For a model of this caliber, we expected an aftermarket-tuned pair which complements the AIO configuration option this model offers.  To compare, the Dell U3818DW already includes a 9-watt pair which isn’t as powerful as dedicated desktop speakers, but sufficient for everyday use.

The HP Z38c boasts a 38-inch AH-IPS panel with a 3840 x 1600 resolution, 60Hz refresh rate, and 5ms response time. A contrast ratio of 1000:1 and a max brightness of 300cd/m2 are also specified, making this model almost on-par with its 38-inch rivals. The screen size is comparable to two 27-inch monitors side by side, eliminating the need for such if you require the extra desktop space for multi-tasking.

The HP Z38c performs admirably out of the box when it comes to color and image quality. Our colorimeter recorded 95% sRGB gamut volume which also equates to around 74% Adobe RGB. Color accuracy makes this model ideal for photo editing since the DeltaE sat at 2.01, ensuring that images are as lifelike as can be.

However, the ball dropped when we checked the HP Z38c’s contrast ratio which only sat at 650:1. This gave the screen a slightly washed out appearance, although it isn’t something regular users should be worried about. One way to alleviate this is to lower the brightness to 50% or less, which for our eyes, gave the screen a boost in vibrancy.

We tried calibrating the HP Z38c with our Spyder Elite5, however, the improvements were too little to be noticeable. Enthusiasts will not like this monitor due to that, but for the rest of the populace who don’t own a colorimeter, this model is an excellent choice. You only need to pop it out of its packaging and assemble it and power it on (don’t forget to reduce the brightness!)

As mentioned, the HP Z38c is superb for multi-tasking options thanks to its massive size and resolution. A monitor like this will allow users to place four to five document windows at the same time without any issues for streamlined multitasking. Designers and editors can also maximize their workflows by stretching the apps from one end to the other.

But no matter how great the HP Z38c may be for work efficiency and entertainment, it just doesn’t cut it as a dedicated gaming monitor. The 60Hz refresh rate induced blurs during our game testing, making similarly priced but smaller 100Hz options more ideal. There is also no G-Sync or FreeSync to take care of tearing and stuttering, which is almost guaranteed due to the resolution being a GPU hog.

Lastly, enthusiast gamers will be disappointed with the HP Z38c since it isn’t as responsive as we all hoped it would be. Input lag averaged at 30ms which is too high for competitive gaming which requires uncompromised speed and accuracy. Casual gamers will still enjoy gaming on the immersive display. However, there are better options for the money.

Thoughts on the HP Z38c

The HP Z38c is a superb 38-inch ultrawide option for professionals who want to streamline their work by multitasking. The IPS screen doesn’t require calibration out of the box save for lowering the default brightness, so just about any users will love the HP Z38c’s colors and quality. The design and the exterior is one of the best in the business, easily earning it a spot among our favorite professional monitors.

We do have a few gripes regarding the HP Z38c and its hefty price tag. For the price, we expect premium extras in the box such as the mini PC mount and tuned built-in speakers so buyers wouldn’t need to look elsewhere. Gaming performance also leaves much to be desired, although we understand the HP designed this monitor for an office desk instead of a game room.