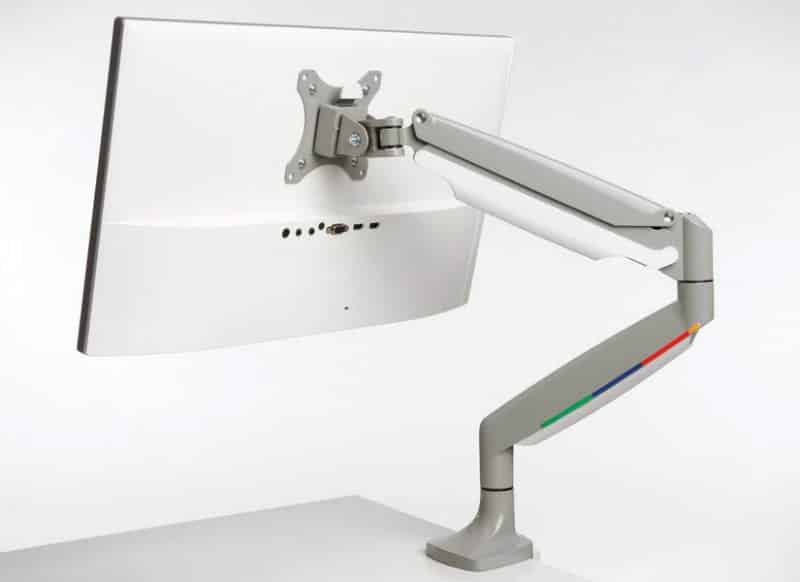 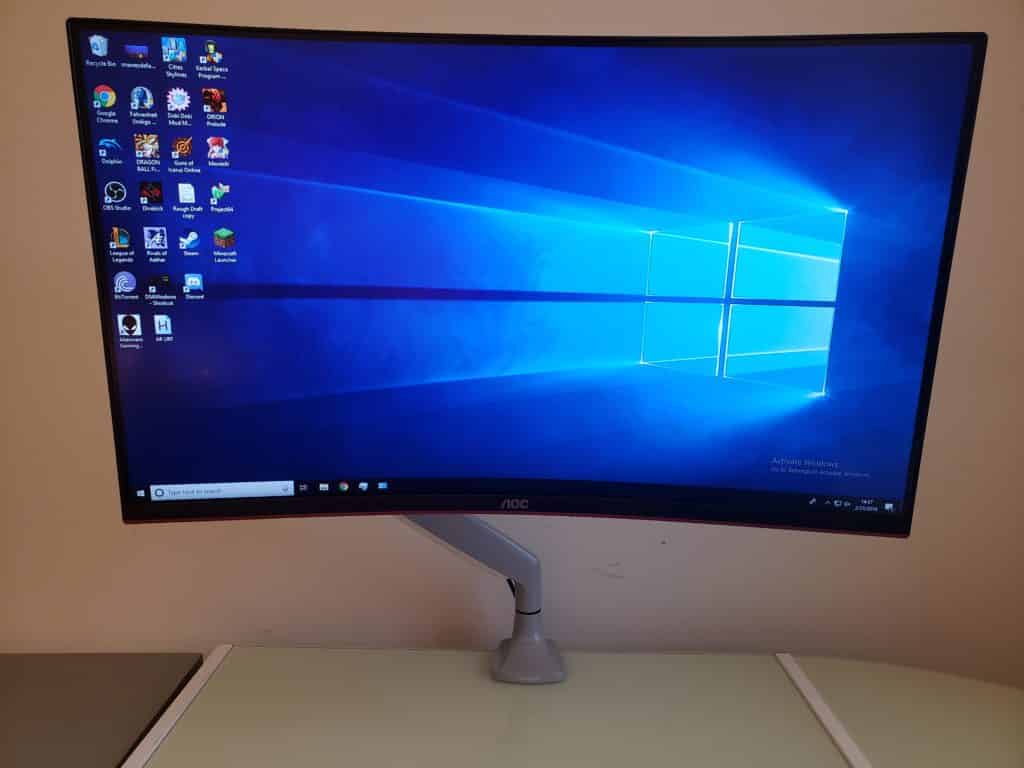 The Kensington SmarFit One-Touch Single Monitor Arm features a premium design composed of durable and lightweight aluminum with a mix of plastics. The device is rated to meet ANSI and BIFMA standards for performance and reliability for the user’s peace of mind. The glossy gray finish is a nice aesthetic touch considering most options are either in black or polished schemes. 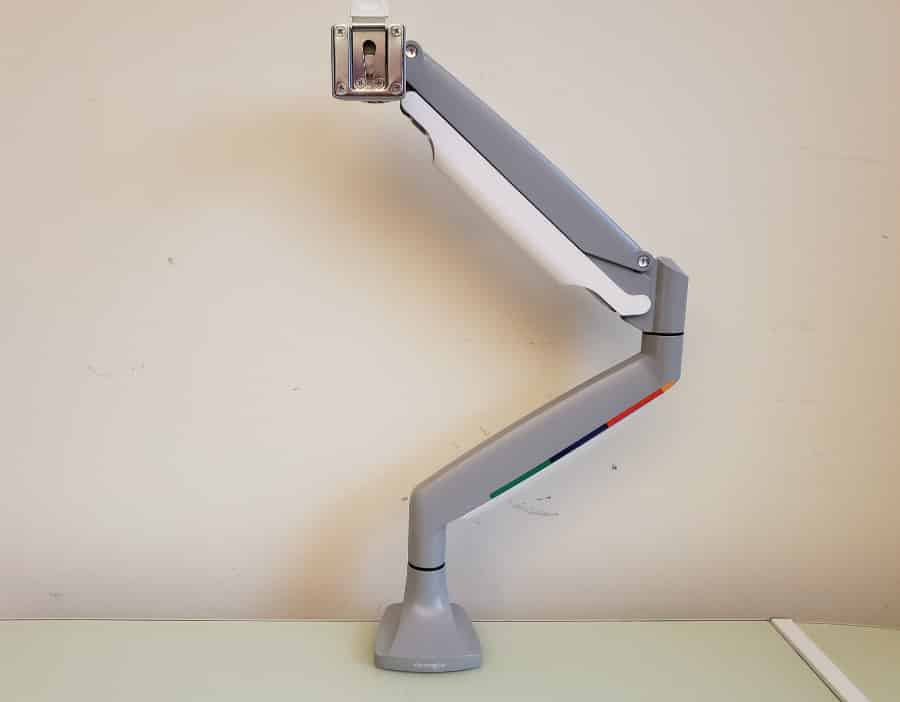 The build quality alone is outstanding since there are no visual imperfections on the Kensington SmarFit One-Touch Single Monitor Arm. The corners are smooth, and the device feels hefty enough to signify that it isn’t flimsy. Movements are soft enough not to require two hands if in case you want to adjust the view angle. 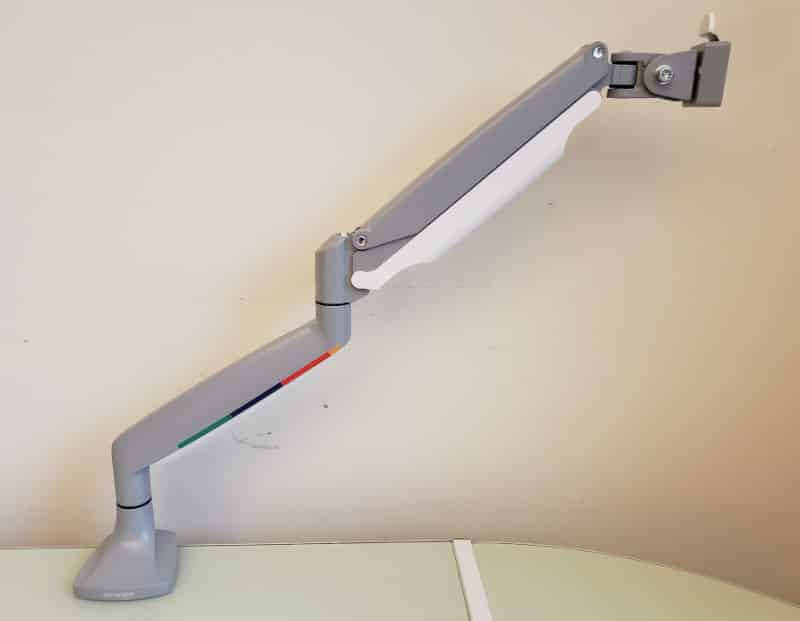 The Kensington SmarFit One-Touch Single Monitor Arm comes with two mounting options for a bit of versatility. The first and most commonly used type is the c-clamp which bites down on desk surfaces which are .39 inch to 3.3 inches thick. You can also use the grommet installation system if your desk has holes for cable pass-throughs or mounts like this model.

As mentioned, the Kensington SmarFit One-Touch Single Monitor Arm supports 13-inch displays up to 32 inches. The maximum weight caps out at 19.8lbs which only a few models can exceed. This offering is a viable, space-saving replacement for included stands or as a replacement for tilt-only mechanisms.

The Kensington SmarFit One-Touch Single Monitor Arm is only compatible with 100 x 100 and 75 x 75 bolt patterns, so that leaves out a lot of large displays like TVs. It’s not a fault of the screen since most PC monitors have 100 x 100 holes at maximum, but it would have been nice to have other options for gamers who prefer TVs.

Another critical feature of the Kensington SmarFit One-Touch Single Monitor Arm is the colored strip that transitions from green to yellow on the lower arm. This the SmartFit feature of the arm which is backed by scientifically proven research for proper fit. The latter promotes wellness and increased productivity, as dictated by the ANSI/BIFMA.

You need to consult the guide to see which color matches the sizes of your hand, and then use it as an alignment guide for the position of the display. The formula isn’t self-adjusting and perfect, so some users might feel the need to adjust a bit further. We consider it as a handy tool to achieve a healthy and comfortable posture, but individual preferences will still outweigh the given results.

The Kensington SmarFit One-Touch Single Monitor Arm also has white plastic shields used to conceal the cables for a neat setup. Using this feature makes your desk more appealing, but keep in mind to allot an allowance for the cable length, so it doesn’t snag when you adjust the display.

The Kensington SmarFit One-Touch Single Monitor Arm fully supports screens that range between 13 to 32 inches, provided they weigh less than 19.8lbs. Some ultrawides should also fit with this display, as long as they fall within the maximum weight limit of the design. We didn’t get to test the device’s capabilities since no ultrawide was on hand at the time of review, but the range of movement should allow it.

The total height travel of 13.2 inches surely beats all of the vertically adjustable stands included with most monitors. You can swivel your display at 180 degrees, plus you can tilt it all the way till it lays flat. The joints at the mounting point also allow pivoting, so the possibilities of arrangement are endless. 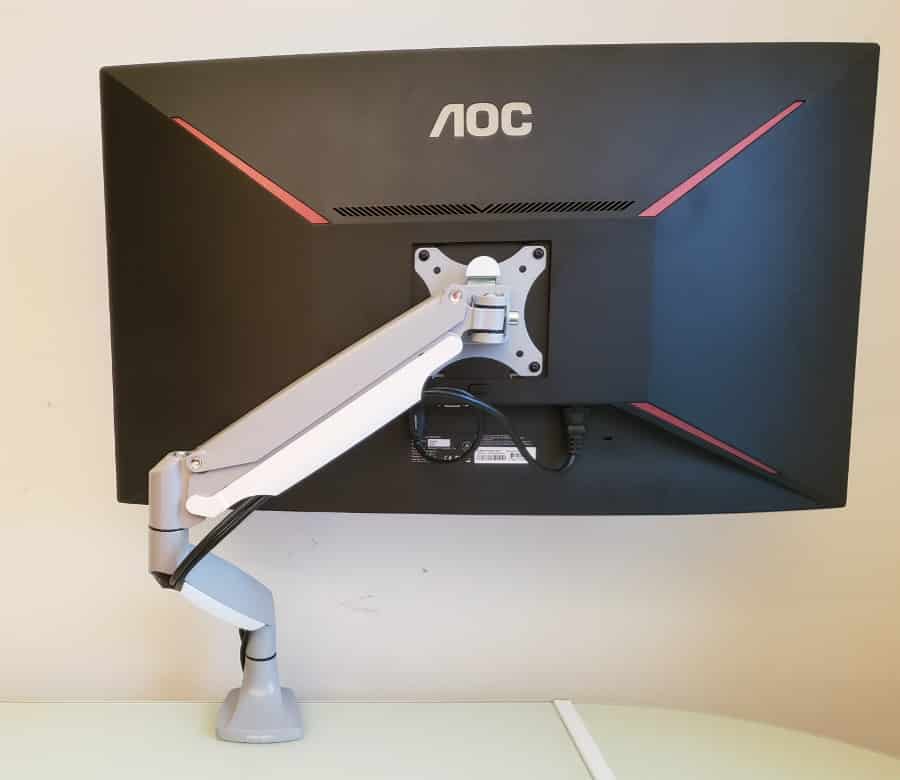 The only limitation we see when using large or ultrawide screens is when trying to use portrait mode. 32-inch displays like the AOC C32G1 we used cleared the desk surface, but a 34-inch display will definitely not. That shouldn’t be an issue anyway since ultrawide monitors, especially the curved models, were not meant to be used in portrait mode. 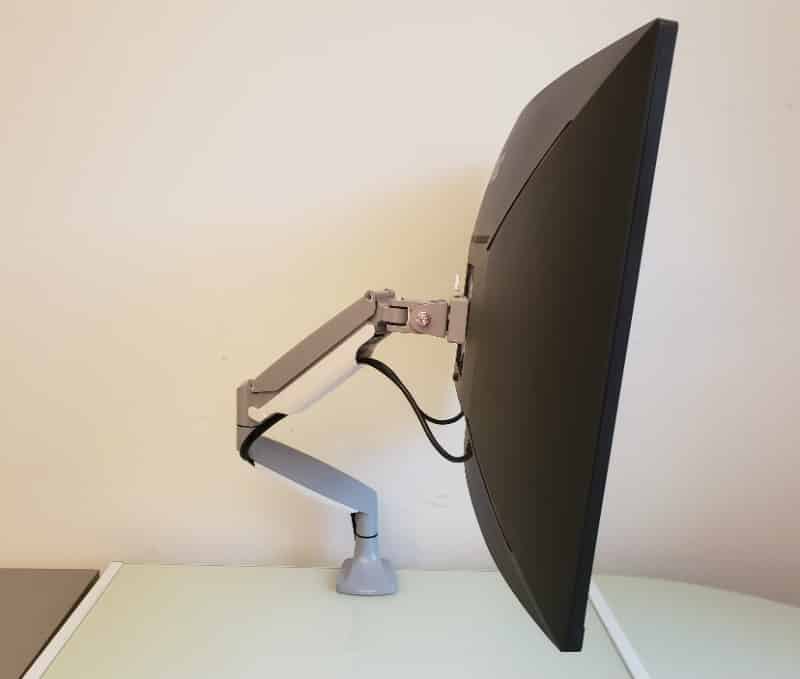 The C-clamp on the Kensington SmarFit One-Touch Single Monitor Arm locks down with sufficient force even if the arm holds a 32-inch curved monitor like the AOC C32G1. The gas spring holds quite well despite the weight of the display, keeping the position steady at all times. However, there are a few loose joints which refused to tighten even after adjusting, but fortunately, they did not affect the posture of the arms.

Setup can take anywhere from five to twenty minutes, provided you know your way around your monitor’s features such as its cabling and VESA mounting. Option for the C-clamp system is less tedious since you don’t have to go under the table to screw in the lock like on the grommet option.

The Kensington SmarFit One-Touch Single Monitor Arm is an excellent choice if you want more flexibility and comfort with from your display’s viewing angles. The armature is flexible enough to provide an almost infinite number of ways you can position your screen, making work or play much more relaxed. The SmartFit feature provides a nice basis for a safe and healthy position, but it isn’t perfect for everyone.