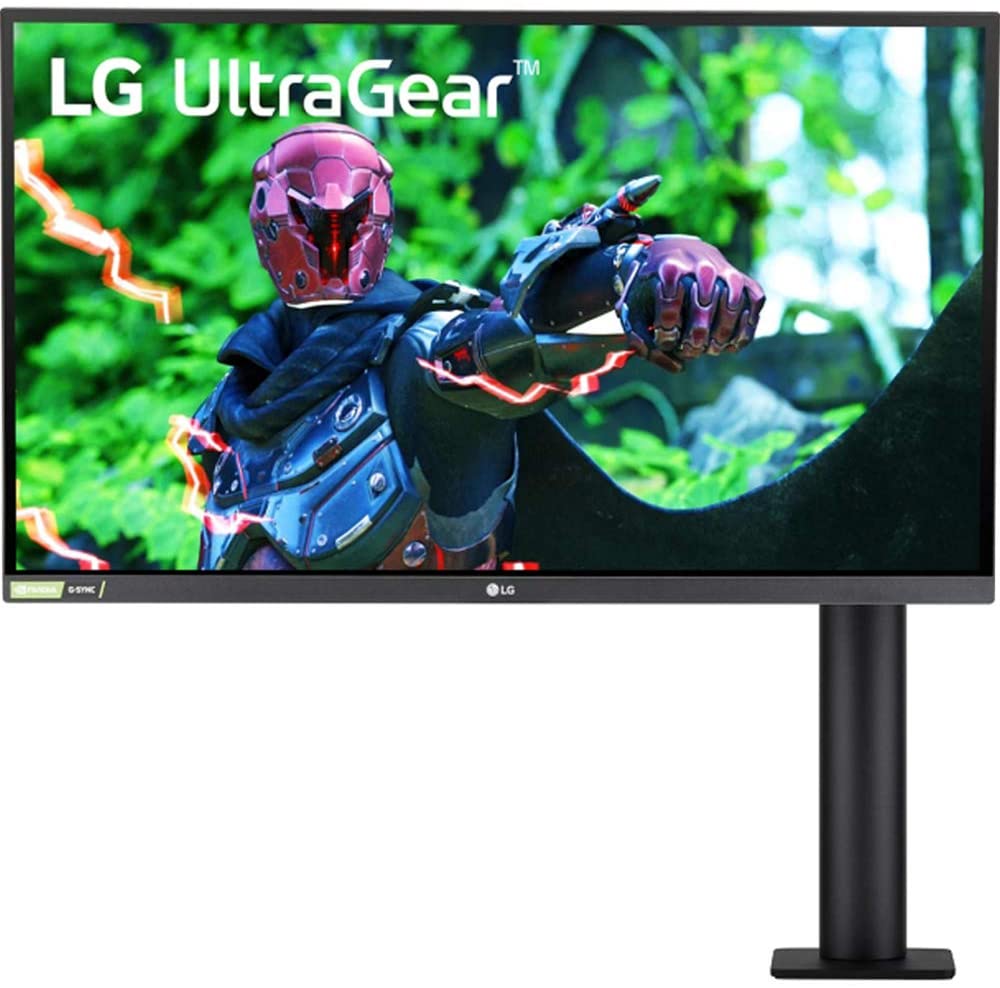 The LG 27GN880-B offers gaming-grade specifications with a unique, space-saving design that’s perfect for streamlined builds and setups. What separates it the most from its predecessor, the LG 27QN880-B, is its 144Hz refresh rate which is suitable for gaming. Let’s check if the LG 27GN880-B is indeed a high-performance monitor instead of a novelty item that’s only designed to be attractive and unique. 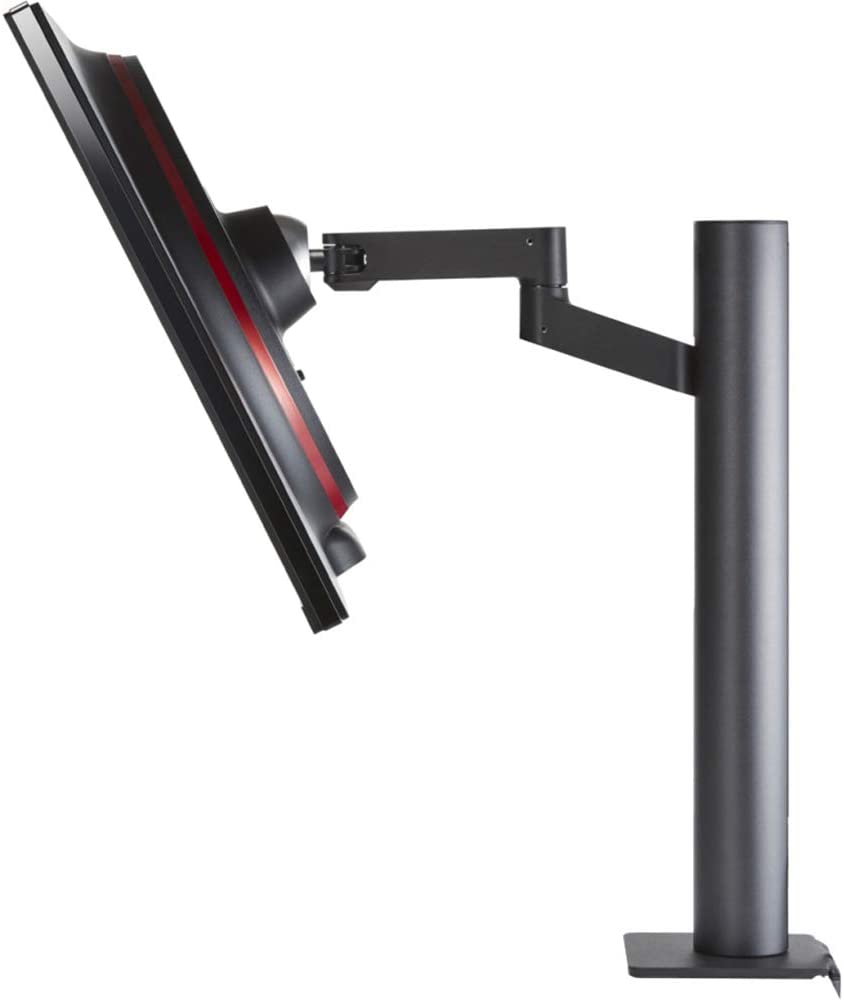 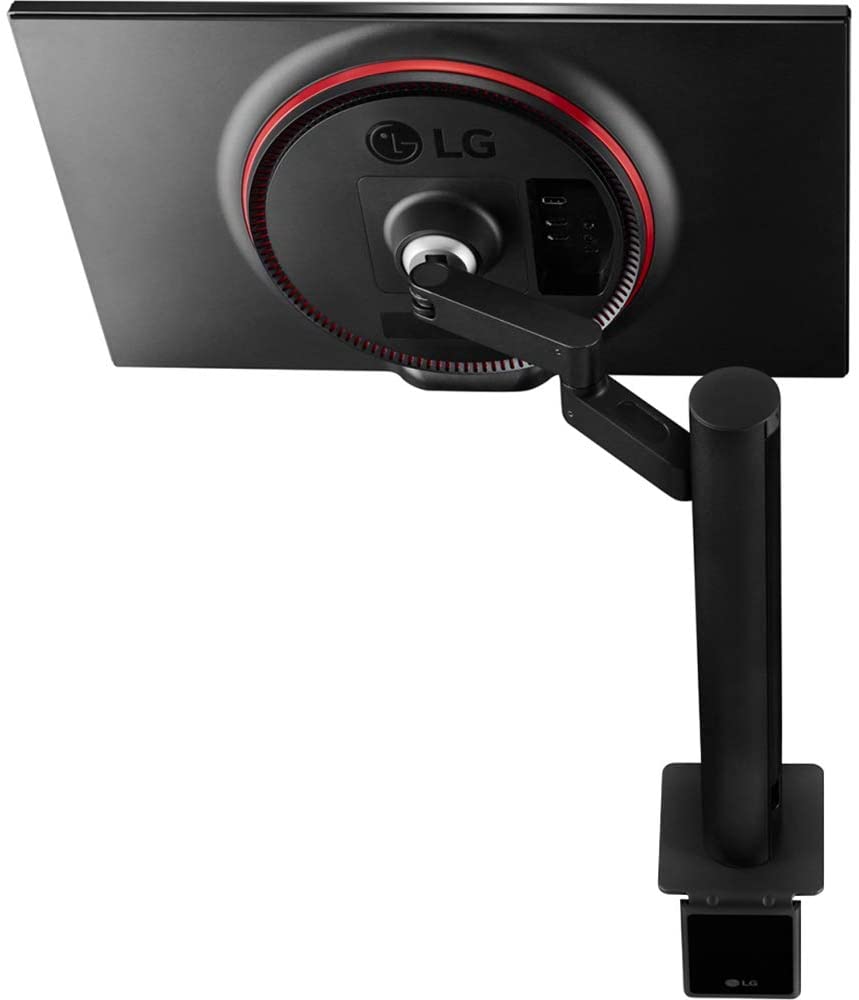 The LG 27GN880-B uses the same overall design as the 27QN880-B, but the cabinet has the UltraGear aesthetic that has the spherical bulge at the back. The monitor is finished in matte black, but there is a red ring at the rear to indicate its UltraGear heritage. The display is bezel-free on three sides, but you will still see minimal inner borders when it’s in use.

The LG 27GN880-B has unique dimensions because its design isn’t the same as a typical desktop monitor. the device when fully extended towards you needs 16 inches of depth, but its clamp only takes up a small area on the edge of your desk. It’s quite heavy at 17.9 pounds, so make sure that the stand is secured to your desk properly to prevent accidents.

Build quality for the LG 27GN880-B is great since there are no cosmetic defects or any signs of weakness on its parts. The plastics feel thick and tough, and there are no uneven seams or gaps on their edges. The stand doesn’t wobble at a worrying level even if it uses a desk clamp, but you have to make sure that it is secured firmly to ensure that it always remains upright.

The LG 27GN880-B has a joystick under the LG logo on the bottom bezel and it’s compatible with the brand’s OnScreen Control app. Both can be utilized to easily access settings and features with very little effort and time spent. OSD buttons found on older models are usually cumbersome and time-consuming, so this is always a big deal for users who calibrate or tweak often.

The LG 27GN880-B has a stand that can also be considered as a monitor arm just like the various VESA mounts on the market. It allows you to tilt, swivel, pivot, and adjust the height just like any other full-range stands. However, the design also allows you to extend and retract the display, adding a dimension of flexibility you won’t find on many models.

Take note that the LG 27GN880-B’s ergo stand needs to clamp to your desktop edge to remain upright. The clamp can accommodate thicknesses from 2.52 inches to 4.8 inches, so most desks should be compatible. The monitor is also compatible with aftermarket stands, but we don’t think it will be necessary unless you have multiple monitors. 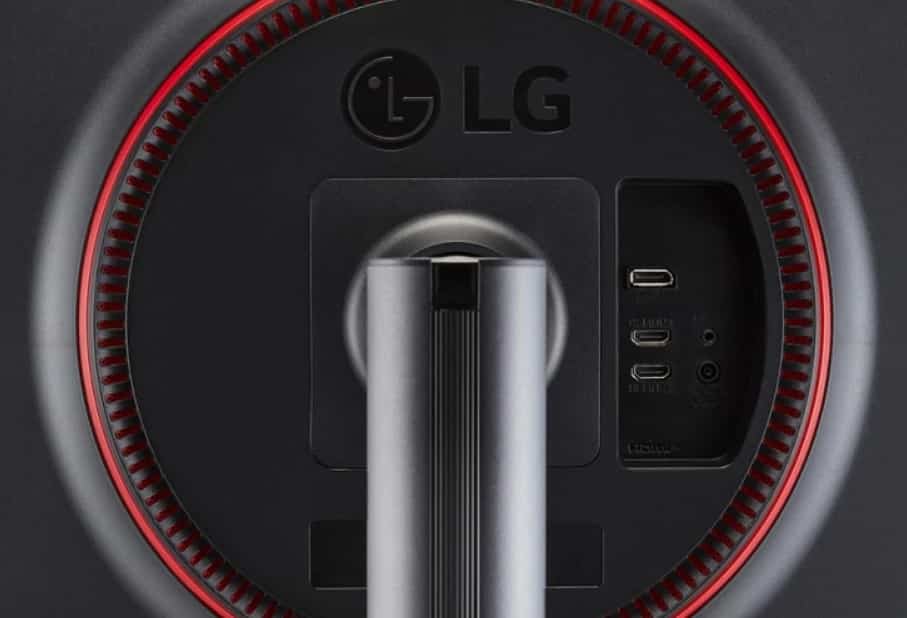 One downside with the LG 27GN880-B compared to the 27QN880-B is it has fewer connectivity options. The layout at the back only includes DisplayPort 1.4, two HDMI 2.0 slots, and a 3.5mm jack for headphones. The other model has USB ports and a USB-C slot which is very handy for users with modern laptops like the MacBook Pro.

The LG 27GN880-B doesn’t have speakers since its intended audience will most likely use headsets anyway. However, it’s also an attractive pick for productivity, so it could use a decent pair that’s usable for background music or conference calls. We’d like to get every feature possible from a monitor to enhance its value, especially if it’s above $500.

The LG 27GN880-B sports a 27-inch Nano IPS panel with a 2560 x 1440 resolution, a 144Hz refresh rate, and a 1ms response time. The backlight has a rated brightness of 350 cd/m2 while its contrast ratio is listed at 1000:1 like most IPS variants. This model doesn’t qualify for VESA’s HDR certification, but it is HDR10 compatible with a built-in HDR Effect filter.

27-inch 1440p monitors are great for both entertainment and productivity since they have a higher pixel density than 1080p, but easier on your eyes compared to a 4K screen. Games will look cleaner and more detailed, but your eyes won’t suffer when reading or browsing since the text sizes will feel just right. You will need a stronger GPU for this model, especially if you want to play AAA games close to its maximum refresh.

The LG 27GN880-B renders 100% sRGB and around 95% DCI-P3 for excellent vibrancy in any task you can throw at it. It is not fine-tuned like the other Nano IPS monitors, so its dE average is slightly higher at 2.78 which is still acceptable for daily use. Most users will be fine with it, but a few tweaks are necessary to balance out the errors.

Calibrating the LG 27GN880-B makes it a suitable choice for editing work and content creation. The dE average can drop to an impressive 0.51 which is a score you normally get with prosumer displays. Gamers will be happy with the results from manual tweaking, but you will need a colorimeter if you want this level of fidelity from the product.

The biggest letdown of the LG 27GN880-B’s imaging is its abysmal contrast ratio which only reached 845:1 at 60% brightness. The backlight averaged at 330 cd/m2 in SDR, but it can pulse up to 425 cd/m2 when HDR10 is active. It’s great that it can extend its brightness, but it does little to improve the contrast which is also quite important for games and movies.

Panel uniformity for the LG 27GN880-B sample could also be better since there are noticeable clouding issues in dark scenes. Backlight bleeding is minor, but the screen almost looks completely washed out when displaying a black image. Take note that this aspect varies between every unit so there will better specimens out there.

The LG 27GN880-B’s pixel response time is excellent since it’s practically free from blurring and smudging unlike many IPS and VA monitors out there. You only need to set its overdrive to its Normal level and leave it there to enjoy the smudge-free screen. We don’t recommend using the Fast and Faster level since they will induce noticeable overshoot in fast and contrasting transitions.

The LG 27GN880-B is a FreeSync monitor but it also works with Nvidia’s G-Sync Compatible solution for GeForce GPU users. This duality is nice to have since you won’t have to ditch the monitor if you switch to the other brand. Input lag is limited to 4ms at 144Hz, so there are no noticeable delays while gaming or working.

The LG 27GN880-B is a nicely designed product that’s ideal for modern setups and needs where flexibility is a major consideration. The ergonomic stand eliminates the need for aftermarket mounts while the vibrant IPS panel takes care of the eye candy. It’s also quite fast even if it looks like it was designed for studios and offices at a glance.

However, the LG 27GN880-B is quite expensive by today’s standards for a 144Hz QHD monitor. it also doesn’t perform quite well in the contrast department, unlike other new IPS monitors which have already breached the 1000:1 mark. You’re paying for a premium with this product, so it isn’t uncalled for to expect more from it.