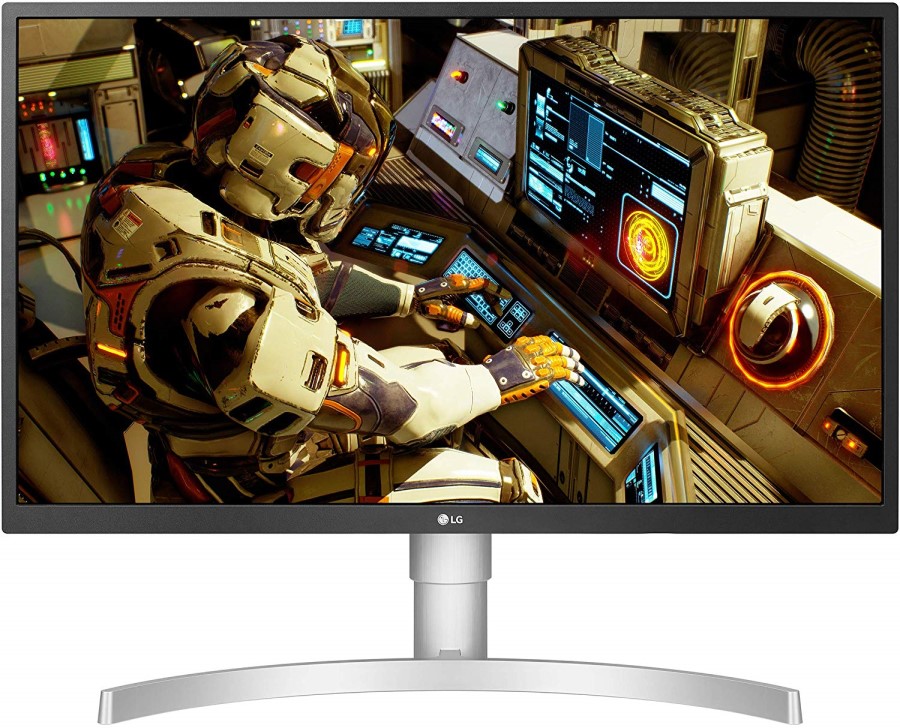 The LG 27UL550 is a version of the excellent LG 27UL650 that’s made more affordable which makes it ideal if you want the best quality at a reasonable price. The difference between the two models other very subtle, but the price difference will help you invest in other parts, such as a more powerful GPU. Let’s check out if the LG 27UL550 can offer the fantastic image quality which made its predecessors and siblings in the current lineup popular. 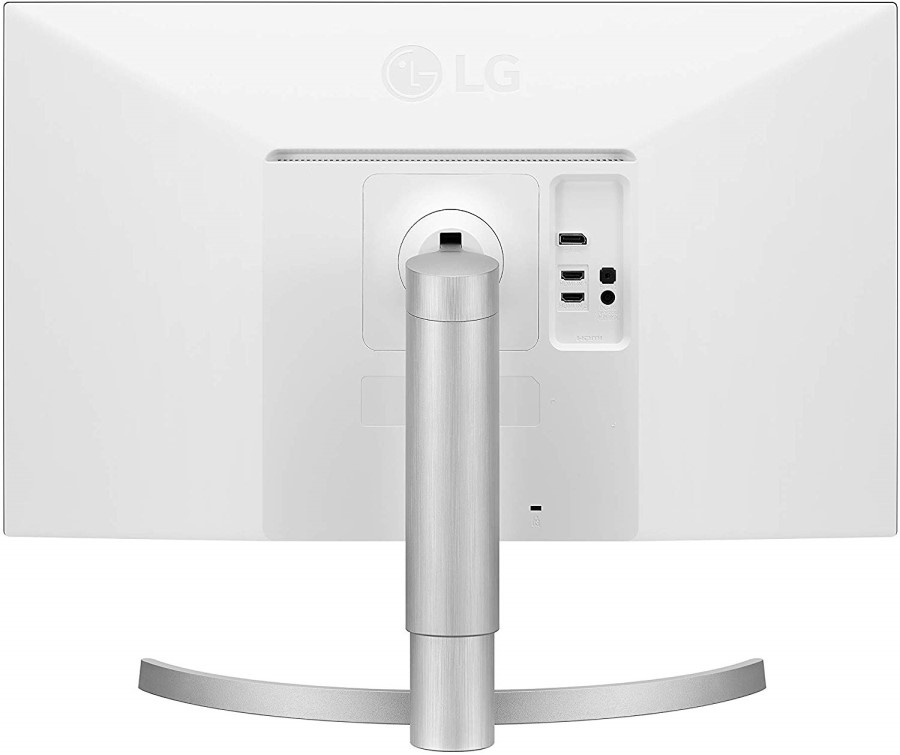 The LG 27UL550 utilizes the same minimalist aesthetic as the rest of the monitors in the UL series. The combination of the matte white chassis and silver base makes the product look like a luxurious match for high-end PCs and laptops. One of the notable difference of this model is it isn’t bezel-free, so you have to deal with matte black borders while using it.

The chassis’s flat back and modest depth makes it ideal for flush-mounting, but you will lose access to the horizontally-oriented ports at the rear. Thankfully, the LG 27UL550 isn’t as intrusive as it looks on a desk, even if its stand takes up a larger area than the usual. The device also weighs and feels solid at thirteen pounds, so it will stand stable once assembled and propped up on your desk.

The latter also tells us that build quality is pretty solid and LG’s quality control measures did an excellent job. The device doesn’t have an ounce of cheapness on its whole body, while the seams perfectly match. Some budget models are prone to unpolished surfaces or edges, but clearly this is not the case for the LG 27UL550.

Another feature you’ll love on the LG 27UL550 is it doesn’t have OSD buttons since they are unnecessary. You can control the settings via LG’s On-Screen Control feature which lets you access options such as brightness right in your Windows or OSX desktop. There is no learning curve with this implementation, so finding the color or brightness sweet spot is as easy as peas.

One more distinct aesthetic that the LG 27UL550 inherited from its siblings is the ArcLine design stand. It features a telescoping upright with tilt and pivot, plus the crescent-shaped base that provides fantastic stability. You can opt for VESA mounts instead, but it lessens the visual appeal of the monitor for your neat work or game station. 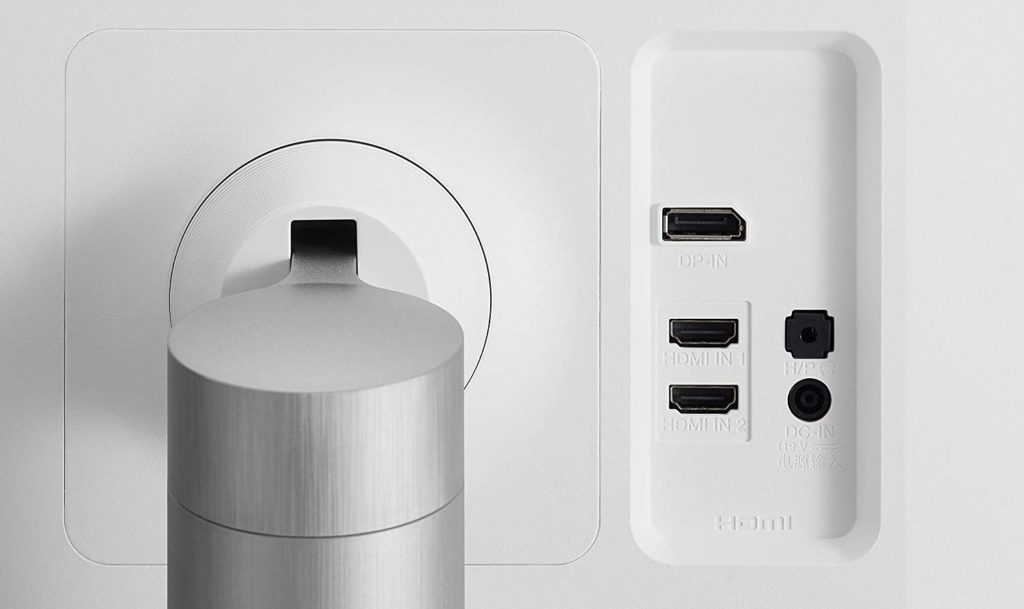 The LG 27UL550 is also equipped to handle a PC and two other 4K devices such as gaming consoles with its connectivity layout. The panel at the rear includes DisplayPort 1.4 along with two HDMI 2.0 slots for video inputs. There is also is a 3.5mm jack, but there are no speakers or USB slots to sweeten the deal.

The screen’s pixel density of 163 PPI makes the LG 27UL550 look extra sharp and crisp. This characteristic makes it perfect for games or editing work, especially if you meticulously pay attention to the level of detail. However, some users might struggle with the considerably smaller text, so using your OS’s scaling feature might be mandatory.

The LG 27UL550 provides excellent color quality out of the box even if it sits at a lower tier. The IPS panel renders 98% of the sRGB gamut, matching the company’s claims for this model. Out of box accuracy has a Delta E average of 2.49, so most users won’t have to calibrate it for daily use.

You can squeeze out a bit more if you have a colorimeter, but it wouldn’t put a beneficial dent on the already decent DE average. It does, however, correct the cooler color temperature of the monitor, which can sometimes make white backgrounds a bit bluish. Gamma sits at 2.23, so it’s one thing you don’t need any trouble to correct.

The main weakness of the LG 27UL550 is its contrast ratio which is limited to 847:1 at around 40% brightness. This characteristic makes the screen look slightly washed out when viewed in the dark. Black luminance isn’t satisfying, unlike on some of LG’s Nano IPS models or other VA variants.

Uniformity on the LG 27UL550’s panel isn’t excellent as well since there is some minor leaking on the top and bottom edges. This flaw results in some clouding issues which become noticeable when viewing darker scenes. Thankfully, this isn’t the case for the entire line since IPS panels are not made equal in this regard.

The LG 27UL550 isn’t the fastest when it comes to pixel response times, so you might see some blurs in fast-paced sequences. Setting to overdrive to its Fast setting helped clean the ghosting out, but some very minor overshoot will appear in select instances. Frankly, that’s a fair trade-off especially if you like shooters where the advanced ghosting will be less noticeable than trails or pixel persistence.

The LG 27UL550 is a FreeSync gaming monitor, but it’s not certified by Nvidia to be G-Sync compatible. Testing the latter works if you activate it manually, but we cannot guarantee that there will be no flaws during extended play. Input lag sits at 9.6ms, so there will be no delays or “de-synced” moments while you enjoy your favorite title.

The LG 27UL550 is a very attractive and affordable 4K IPS monitor that is ready to use right out of its box. The product’s factory calibration is suitable for most daily tasks, and only photo editors will need to calibrate and enhance it further. The monitor isn’t the fastest in the market, but it’s responsive enough to let you enjoy your preferred titles in 4K.

One of the notable omissions from the LG 27UL550’s capabilities is it’s not DisplayHDR 400 compliant. However, we don’t think its a huge loss since the standard doesn’t offer a substantial visual upgrade anyway. The LG 27UL550 is a great pick if you want a superb all-arounder that will not cost an arm and a leg.