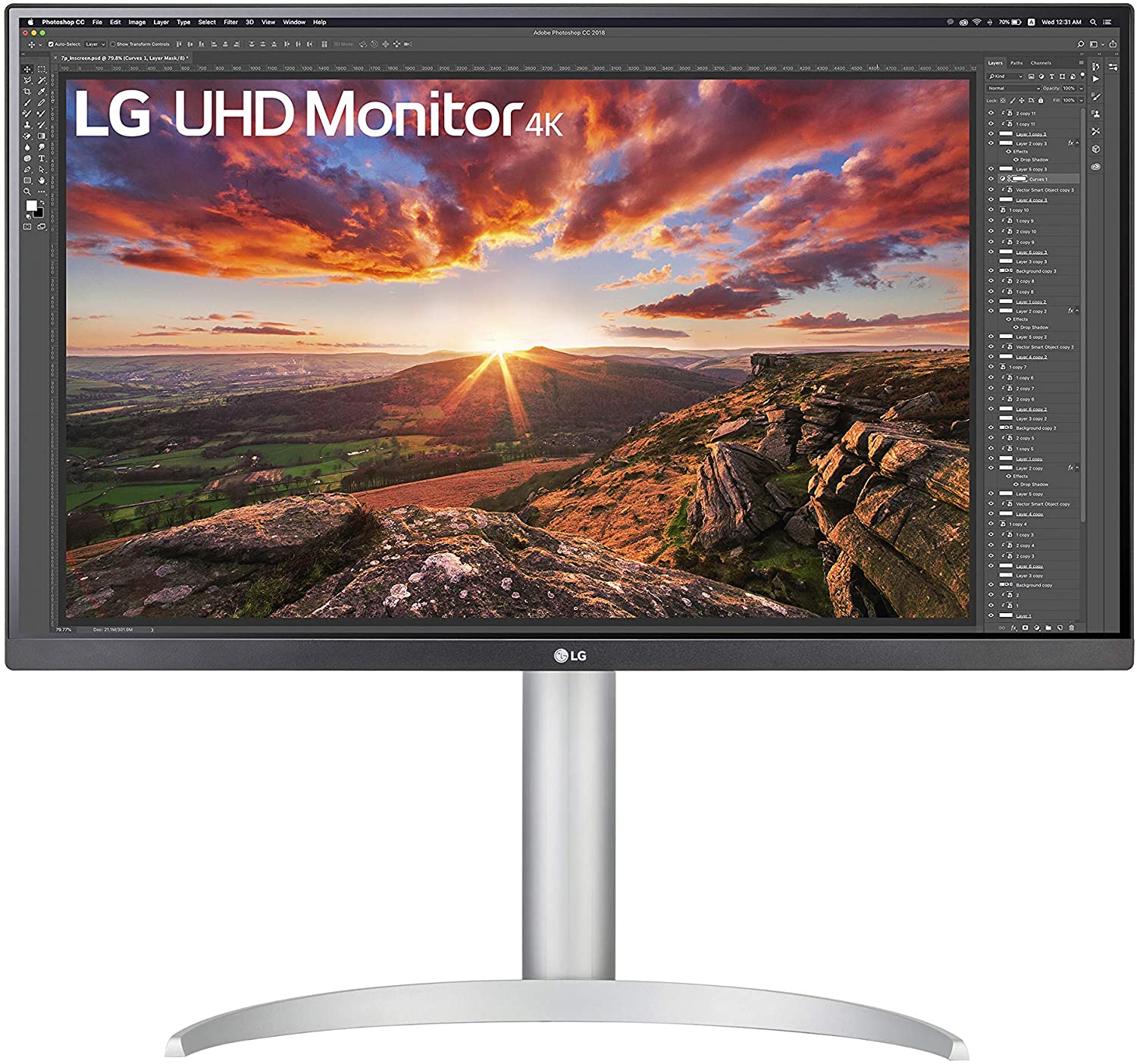 The LG 27UP850-W is the latest iteration of one of the brand’s most popular 4K IPS monitors that are designed for daily use. Wide gamut IPS panels work well for any task including gaming, but the addition of USB-C makes it a competitive business solution. Let’s check and see if the LG 27UP850-W can be considered as an upgrade when compared to its best-selling predecessors. 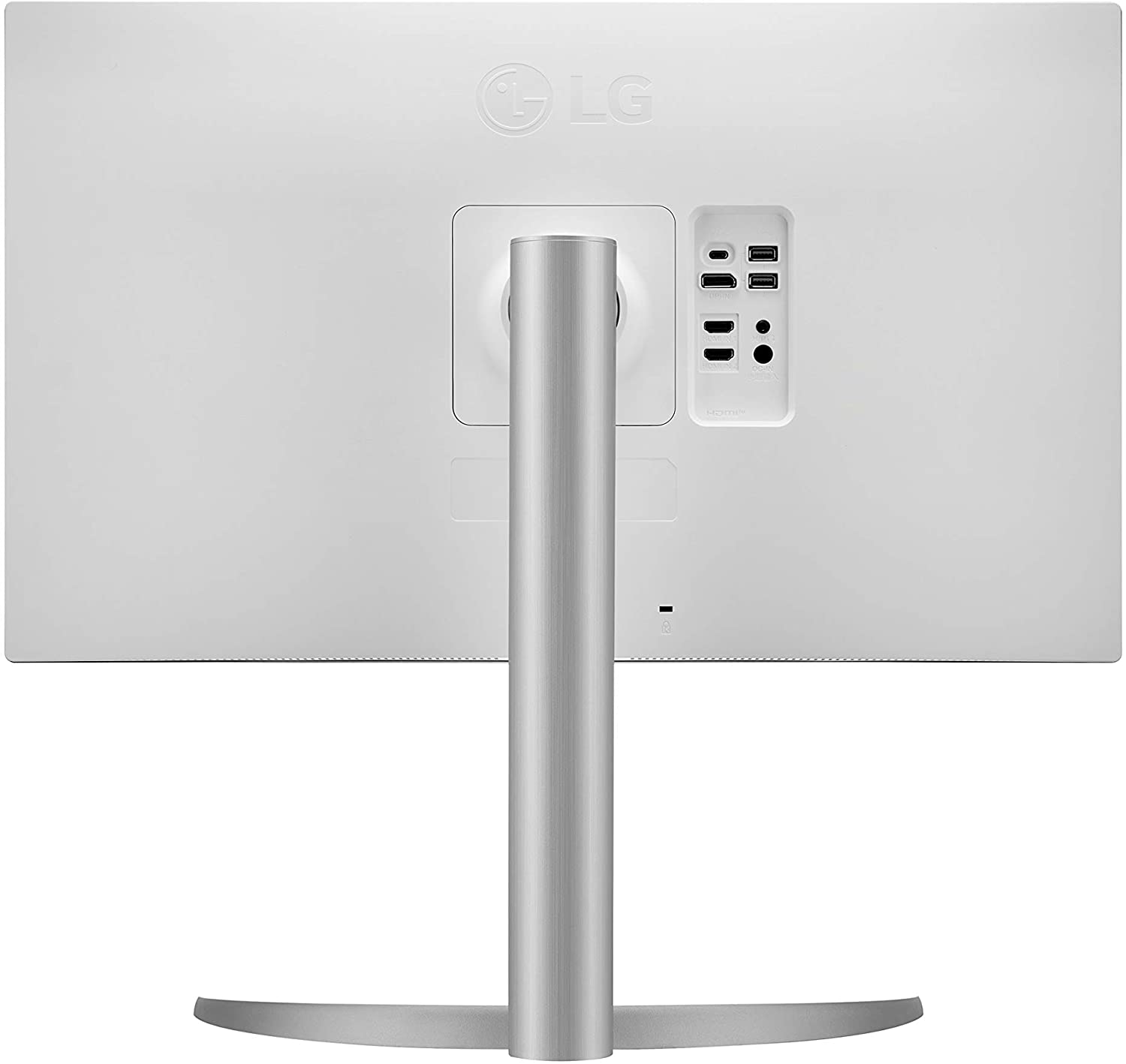 The LG 27UP850-W’s design hasn’t changed much compared to its predecessors, but that’s because the aesthetic has worked well for it. The device has a matte white shell and a silver stand so it won’t look out of place in a studio setting. The display is bezel-free on three sides, but you will still see inner borders when it’s in use.

It is not a gigantic monitor, but the stand is quite big due to the aging ArcLine design on the stand and its base. It weighs in at around 13 pounds, so it’s fairly light enough to be carried around if you rearrange your setup often. It’s not portable, but you won’t need an extra set of hands while setting it up in your office or game room.

Build quality for the LG 27UP850-W is as good as ever thanks to their excellent craftsmanship and premium materials. The plastic panels are thick and sturdy, so they won’t flex or crack under moderate amounts of force. The stand is firm and stable so the screen won’t shake or sag during regular usage.

The LG 27UP850-W has an OSD joystick for your convenience and it also works with the brand’s OnScreen Control app. The latter lets you manipulate its features directly on your Windows desktop so you spend less time tweaking it. This combination is effective at reducing the stress of calibrating a monitor since it’s easier to use, even for beginners.

The stand included with the LG 27UP850-W offers tilt, pivot, and height adjustments so you can get a good viewing angle. You can’t swivel it from side to side, but that’s only necessary if you plan on using this as a secondary display or if you have multiple monitors. You can use VESA mounts, but that’s unnecessary in most cases. 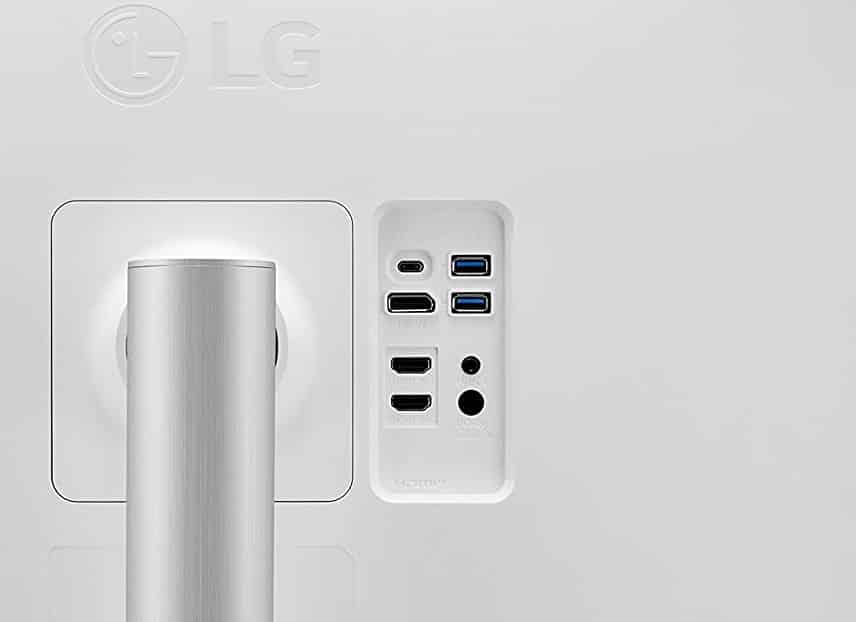 The LG 27UP850-W’s connectivity layout is no doubt its main highlight since it includes a 96-watt USB-C slot. You also get the standard DisplayPort 1.4 and dual HDMI 2.0 combo, but the USB-C port enables single operation with the latest laptops. You also get to utilize two USB 3.0 ports and the 3.5mm jack for your peripherals and audio equipment.

Another upgrade we liked on the LG 27UP850-W is its speakers which now have 5 watts of power. They can get decently loud compared to other built-ins and they are capable of better clarity along with some semblance of bass. Headsets and desktop speakers will always sound better, but it is nice to have improved monitor speakers on the side.

The LG 27UP850-W sports a 27-inch IPS panel with a 3840 x 2160 resolution, a 60Hz refresh rate, and a 5ms response time. The backlight has a 400 cd/m2 maximum while the contrast ratio is listed at 1200:1, unlike most IPS panels. This model is HDR 400 certified, but we all know how limited that is when it comes to expanding the contrast and dynamic range of the screen.

27-inch 4K screens aren’t always ideal since they can reduce legibility and visibility due to their higher pixel density. However, games, movies, and images are a joy to view since they are sharper and noticeably cleaner looking compared to a lower resolution screen. You also get more room to work with, but it can get tricky if scaling and multiple windows are involved in your productivity.

The LG 27UP850-W renders 100% sRGB and around 96% DCI-P3 for excellent vibrancy in SDR and HDR. Its default accuracy is great since the average is only at 1.89 so users won’t see color errors in any scenario. Calibrating the device isn’t necessary since it looks like LG had that covered from the factory.

Using a colorimeter with the LG 27UP850-W improved its dE average to an impressive 0.87. That’s a score you would normally get from a prosumer device so it means that this monitor can be used for editing purposes. It is not practical to purchase colorimeters for regular use and gaming, but it can be justified if you are into content creation or color-critical work.

The LG 27UP850-W reached 409 cd/m2 in SDR and 425 cd/m2 when HDR is active so it’s bright enough to fight off glare. Its contrast ratio at 50% brightness sits at 1109:1, but it doesn’t expand exponentially when HDR kicks in. there are some noticeable improvements there, but it is limited to highlights while black or dark images still look washed out.

Panel uniformity for the LG 27UP850-W is great since there were no major backlight leaks or clouding issues on the screen. There are some variances in the backlight’s spread, but it’s barely noticeable while gaming or watching videos. Take note that this model has an IPS panel so it’s still prone to these issues and subject to manufacturing tolerances.

The LG 27UP850-W has an acceptable pixel response time, but the 60Hz limitation is noticeable in some instances. Using the overdrive is essential, but we can only recommend its Fast level since the maximum will induce overshoot. Doing so will clean up the visible trailing and persistence, but it is still not comparable to a dedicated gaming variant.

The LG 27UP850-W is compatible with FreeSync and G-Sync so you don’t have to stick with one brand to guarantee VRR functionality. This is essential now since the GPU market is unstable so getting a specific card at a decent price isn’t guaranteed. Input lag sits at 9ms at 60Hz, so there is no need to worry about delays while gaming.

The LG 27UP850-W is a fantastic 4K monitor for those who want a flexible and high-quality screen. Its IPS panel is capable of eye-popping color quality so it can be used for entertainment or professional purposes. We also liked the upgrades it received, starting with its powerful 96-watt USB-C port which can charge high-spec laptops without breaking a sweat.

Most of our complaints about it are minor, such as its USB slots which have always been limited to two. It’s also more expensive than other identical offerings, but you have to remember that the 27UK850 started at a higher price with lesser specifications. It’s a great buy, but try to find it with a discount to further sweeten the deal.

Search
NEW
POPULAR
You are here: Home / Reviews / LG 27UP850-W Review – 4K IPS Mixed-Use Monitor with USB-C
This website uses cookies to improve your experience. We'll assume you're ok with this, but you can opt-out if you wish.Accept Read More
Privacy & Cookies Policy