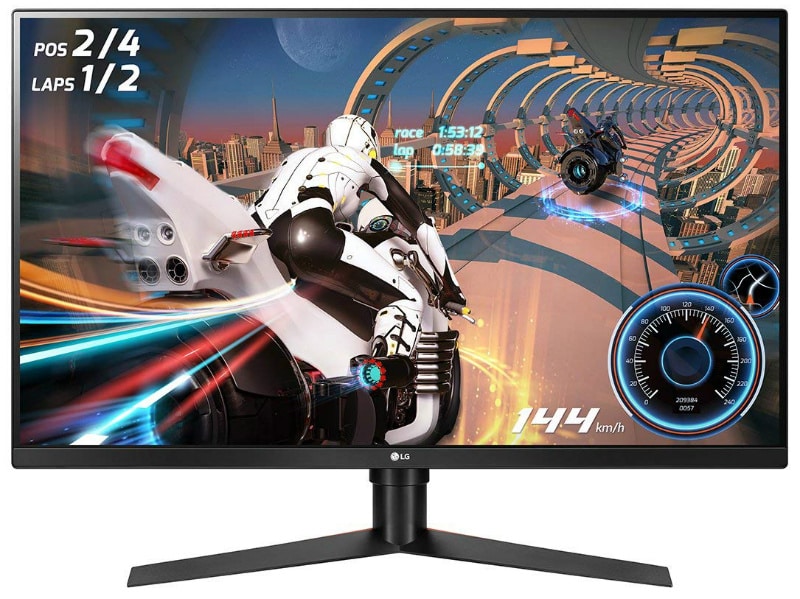 The LG 32GK850F offers a 32-inch high refresh screen coupled with modern features for a substantially better gaming experience. This model lacks a few of the exclusive features found on the G-Sync counterpart, the 32GK850G, plus the additional premium you pay for Nvidia’s exclusivity. Let’s find out if LG 32GK850F’s FreeSync 2 and HDR compatibility could make it the better buy between the two. 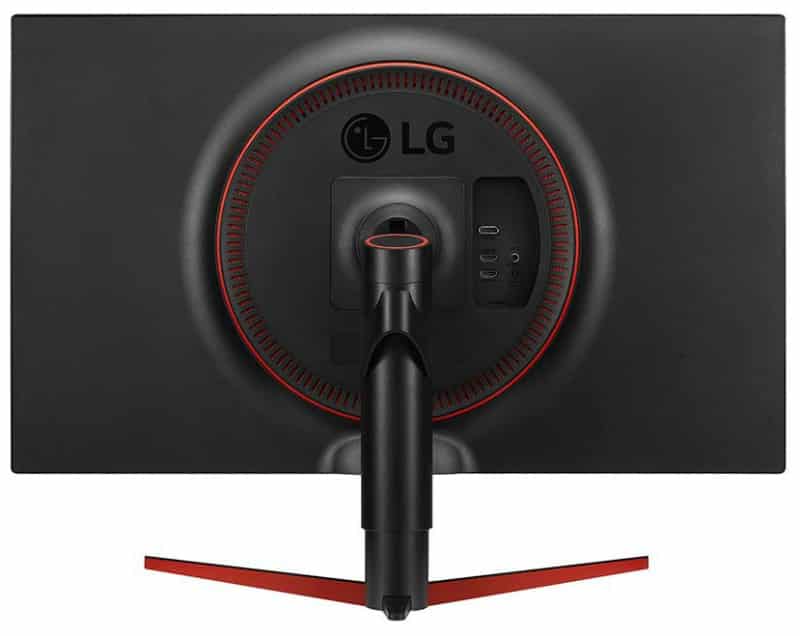 The LG 32GK850F fits right into the brand’s portfolio of exquisite monitors thanks to its minimalist design and modest proportions. The monitor is dominantly finished in matte black dashed with a few hints of red in some inconspicuous spots. The monitor is also bezel-free, sporting the three-sided dual-stage design found on monitors like the LG 27UK650.

This model is ideal for multi-monitor setups since its thin frame makes it very manageable. The thin borders will look like minuscule disturbances if you set two or three side by side. The LG 32GK850F is also lightweight for its size, so finding a capable VESA mount should be easily doable. 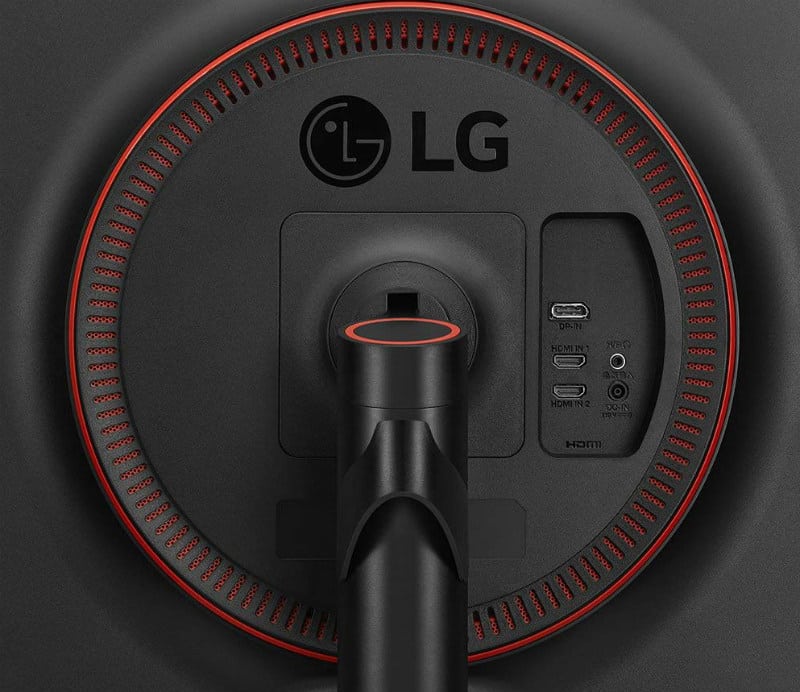 The LG 32GK850F looks almost entirely identical to the G-variant all the way to its backside. However, since FreeSync monitors are sold at lower price points, this model does not include the Light Sphere RGB LED feature at the back. In its place is a red plastic ring which, to be honest, doesn’t look tacky against the contemporary design.

We prefer schemes as the LG 32GK850F offers over more aggressive variants like the Asus XG32VQ and its signature ROG aesthetic. The gaudy, high-tech looks of competitors are a hit nowadays, but it isn’t as timeless as a slim, matte black display. The design weighs heavily on our top picks because premium monitors like this model should last quite a while.

The LG 32GK850F is supported by a penguin-feet stand with a tubular telescopic upright that lets you adjust the height of the display. You can tilt, swivel, and pivot the chassis itself, so most positions are doable with this default configuration along. But if you prefer VESA mounting, the mechanism is entirely removable via a QD switch.

Another advantage of the LG 32GK850F over its G-Sync sibling is it has more ports to offer. The layout isn’t as crazy as seen on other FreeSync monitors, but you do get an extra HDMI slot along with DP 1.2 with this model. The main difference the two ports will run version 2.0 which is suitable for connecting a console like an Xbox One X.

The LG 32GK850F sports a 32-inch VA panel with a 2560 x 1440 resolution, 144Hz refresh rate, and 5ms response time. The maximum contrast specified remains at 3000:1, but the backlight gets bumped up to 400cd/m2. The latter enables this monitor to fit under VESA’s HDR400 standard which is the bare minimum for compatible monitors.

We always say that 4K is more suited to 32-inch and larger displays, but the LG 32GK850F’s output looks and feels just about right. 93 Pixels per inch still offers substantially more precise details and sharpness, so graphics and images shouldn’t look jagged on the edges. Text is also easier to read in this form factor, reducing the need to apply Windows scaling which can be bothersome at times.

The VA panel used with the LG 32GK850F offers fantastic vibrancy, putting out 100% sRGB coverage with considerable extensions in some shades. Color accuracy is superb as well, staying within Delta E 2.0 and a color temperature that almost hits the 6500K standard. Gamma also sits perfectly at 2.2 right from the start, although some of the filters except Gamer 1 have considerable deviations.

We also measured a maximum contrast ratio of 2900:1 from the LG 32GK850F which is very close to the specified amount. This gives the screen its richness and excellent visibility, even when viewing darker scenes or environments. The display’s SDR performance is one of the best we have seen in the gaming segment save for the included presets.

Another fantastic aspect of the LG 32GK850F is its superb panel and color uniformity which are difficult to control with larger displays. The illumination variances in the quadrants of the VA panel did not even reach 10% according to our colorimeter. Color, on the other hand, looked perfectly balanced across the screen with deviances staying within DeltaE 2.5 from the D65 standard.

One considerable flaw of the LG 32GK850F is its HDR performance which is underwhelming, to say the least. The technology applied an adverse effect on the image quality which made colors look washed out. The contrast will drop to 1200:1 along with Gamma, so for most titles, applying the HDR mode from this model isn’t ideal.

The LG 32GK850F is based on VA technology, so it is prone to blurring and ghosting when motion picks up. Fortunately, LG packed an optimized Overdrive feature with this model. For most instances, we recommend users to stay with the Normal setting. But if blurring persists, you can try the Fastest level and retain it if you are less sensitive to overshoot than some of us.

We also noticed that the LG 32GK850G looked and felt faster in pixel response time when G-Sync is active. The difference is only noticeable if you’ve seen both in action or own both to compare. Activating the LG 32GK850F’s FreeSync did not help, but it’s too little of a difference to be considered a deal breaker.

Finally, the LG 32GK850F is FreeSync 2 compatible for gamers who have AMD GPUs in their builds. This model is also delay-free since it’s input lag clocks in at only 5ms, making it ideal for competitive gaming and FPS titles.

The LG 32GK850F is another fantastic gaming monitor when it comes to image quality and responsiveness. The product’s low input lag and decent pixel transition capabilities make it suitable for fast-paced action and competitive titles. Users also don’t need to extensively calibrate the monitor due to its fantastic colors and contrast.

However, we don’t recommend this model to those who are looking for a positive HDR experience. The LG 32GK850F suffered from washed out colors and lower contrast once HDR is enabled, although it isn’t equipped adequately to do so. It’s a nice bonus to test and play around with, but we can only consider this product an excellent buy if it’s for SDR gaming or viewing.