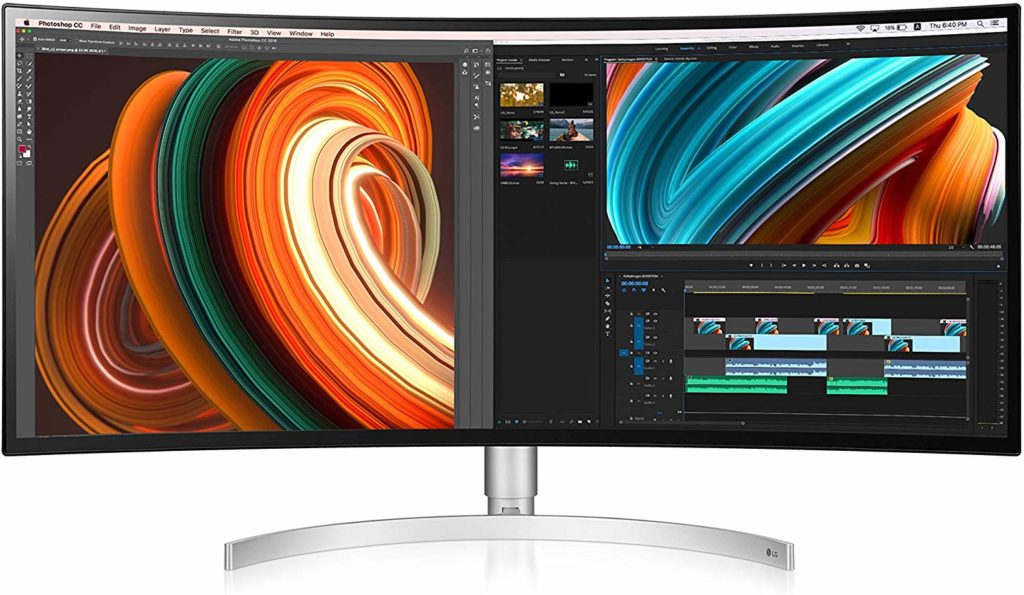 The LG 34WK95C promises fantastic image quality and vibrancy thanks to a high-caliber Nano IPS panel with increased contrast and gamut coverage. The monitor is also DIsplayHDR 400-compliant, plus the device comes equipped with a 60-Watt USB-C port. The LG34WK95C is a practical alternative to its 5K2K sibling, but can it provide the same caliber of performance we have come to expect from LG’s Nano IPS tech? 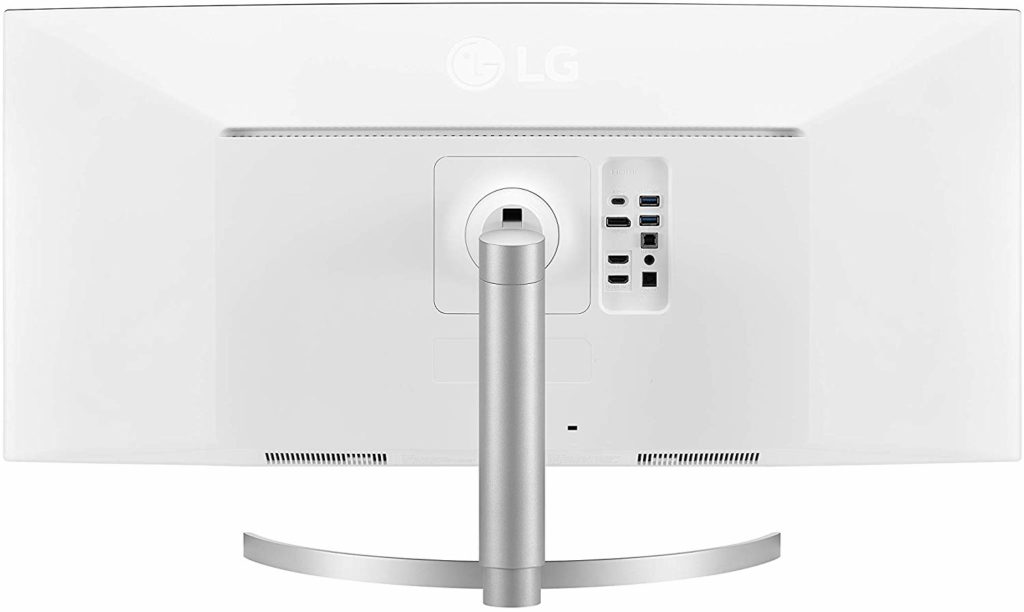 The LG 34WK95C aims to be a top-ranked premium monitor, and it achieves the latter description with its luxurious design. The device is finished in matte white that’s accented with a silver base that makes it ideal for sophisticated, aluminum-clad devices like MacBook Pros. The display areais bezel-free giving the user the impression of a larger window into the digital world.

The LG 34WK95C isn’t as imposing as its 49-inch sibling, but you still have to consider the dimensions it will require on your desk. The product takes up almost 10 inches of depth, while the cabinet itself is almost 3 feet wide. Its also quite heavy at a little over 23 lbs, but that heft gives the product excellent stability.

Build quality for the LG 34WK95C is fantastic as seen on the blemish-free and rigid surfaces of the LG 34WK95C’s body. The materials used feel thick and durable, while the seams match perfectly with each other. You also won’t hear any creaking sounds or the hum of electronics when the device is powered on.

One of the distinct features of the LG 34WK95C and its siblings is the ArcLine design stand which has been used for a few generations by the brand. The crescent-shaped base takes up a lot of space, but its reach provides superb stability and eliminates wobbling from the device. You can tilt the display and adjust its height, or you can get a VESA mount with a 100 x 100 pattern if you want more flexibility.

The LG 34WK95C is also a USB-C monitor, but it’s not Thunderbolt 3 compatible like the 34WK95U. You can still use the USB-C for DP Alt Mode or video inputs, but charging power is limited to 60 Watts. Take note, that’s a bit short for the higher-tiered USB-C laptops which sometimes take up 85 Watts to charge while in use. 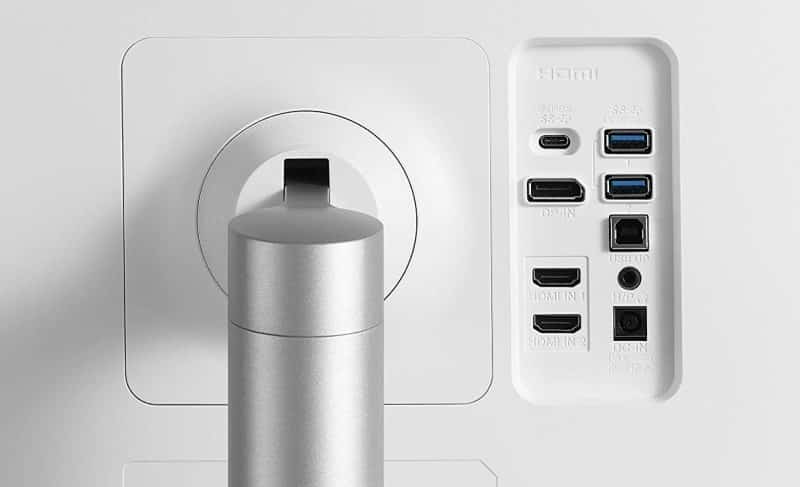 There is also a DisplayPort 1.2 and dual HDMI 2.0 connectors on the LG 34WK95C if you don’t have a USB-C device. You will also find a trio of USB 3.0 slots on the I/O, along with a 3.5mm jack for audio passthrough. The monitor is well-equipped to become your next all-in-one display, but the resolution is only friendly towards PC users.

The LG 34WK95C packs a 7-watt pair of speakers with Maxx Audio technology like many of LG’s high-end offerings. The pair can get noticeably louder with less distortion than the usual built-ins, making them ideal for both music and videos. Gamers will still prefer headsets for their broader detail, but it’s nice to have a ready to use speaker solution for other purposes.

The LG 34WK95C boasts a 34-inch Nano IPS panel with a 3440 x 1440 resolution, 75Hz refresh rate, and 5ms response time. The backlight peaks at 400 cd/m2 to satisfy VESA’s DisplayHDR 400 standard, while contrast is rated at 1000:1. These aren’t gaming specs, but the extra headroom in refresh rate will still be useful aside from the product’s focus on image fidelity.

Ultrawides like the LG 34WK95C have a pixel density of more or less 110 PPI which is a considerable upgrade over your office monitor. The screen offers a very tangible increase in sharpness and screen space, but it will also noticeably tax your GPU. Some top-end cards even struggle to reach a stable 60FPS rate with this resolution, giving more weight to the 75Hz limit this model provides.

The LG 34WK95C offers fantastic color quality out of the box, reaching as much as 95% DCI-P3 coverage which also equates to more or less 120% sRGB. Accuracy by default sits at 2.59 which is slightly higher than the ideal, but most wouldn’t notice the difference. Only a colorimeter can make considerable improvements in this regard, so consider investing in one if you plan to use this monitor for photo editing.

The extra vibrancy of the LG 34WK95C’s Nano IPS screen also results in a level of warmth that we’re not too fond of. Reducing the red temperature to eliminate some of the yellowing will help in this regard. However, a colorimeter is still advisable if you want the best possible output.

We expected a higher contrast ratio from the LG 34WK95C since its based on Nano IPS tech, but it maxed out at 1040:1 when its HDR mode is active. This isn’t a bad result by any means, but some Nano IPS models we’ve seen are capable of more. There is no washing out or color bleeding thanks to this capability, but you will still notice that the screen can look grayish when viewing dark scenes at night.

One issue that was found on the LG 34WK95C is its panel uniformity which was affected by light leaks at the upper corners. There is a noticeable shift in contrast which shows up as clouding when you view dark or black images. Colors are also slightly affected, but this aspect could change on other available units.

The LG 34WK95C is prone to blurring by default, especially when fast-paced sequences are on screen. Setting the monitor’s overdrive feature to its Faster setting helped considerably, but some trailing and a bit of overshoot can still appear. The maximum level is off-limits since it does remove the blurring completely, but at the expense of massive overshoot or advanced ghosting.

The LG 34WK95C is a FreeSync gaming monitor making it ideal if you have a powerful Radeon GPU like the 5700XT in your system. G-Sync compatibility isn’t guaranteed, but the monitor’s specifications should allow it to work if you try and activate it manually. Input lag sits at 10ms at 60Hz, so there should be no delays between your keypresses and the screen.

The LG 34WK95C is a fantastic Nano IPS monitor if vibrancy is concerned thanks to its superb DCI-P3 coverage with reasonable accuracy. The display can benefit considerably from a colorimeter, but many users won’t feel the need to use one extensively. The USB-C connectivity of the product is one of its stand-out characteristics since it’s in demand at the moment, but a bit more juice would have helped.

However, there are some limitations you have to consider when buying the LG 34WK95C. it’s not the most responsive in pixel transitions, but this model was not meant to be dedicated for gaming purposes. You also have to deal with a few IPS-related defects such as backlight leaks, so make sure you buy from a seller that will allow easy returns and exchanges for quick turnarounds.