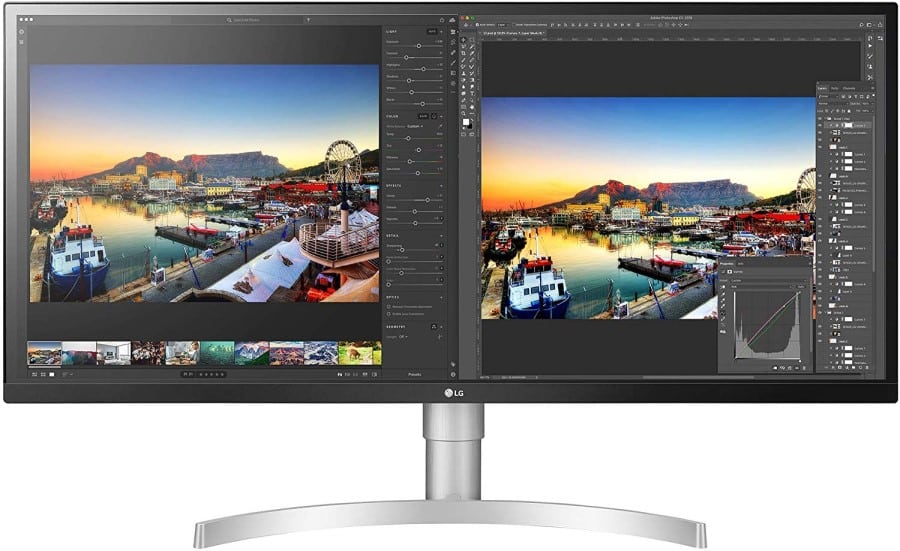 The LG 34WL850-W is one of the latest premium ultrawide monitors in the market that offers the brand’s Nano IPS technology with Thunderbolt 3 connectivity. This model is a step lower than the more expensive LG 34K95U since it has a 3440 x 1440 resolution instead of the latter’s 5120 x 2160. The LG 34WL850-W  was conceived with designers and multitaskers in mind, but does it have the image quality to make it a top-pick? 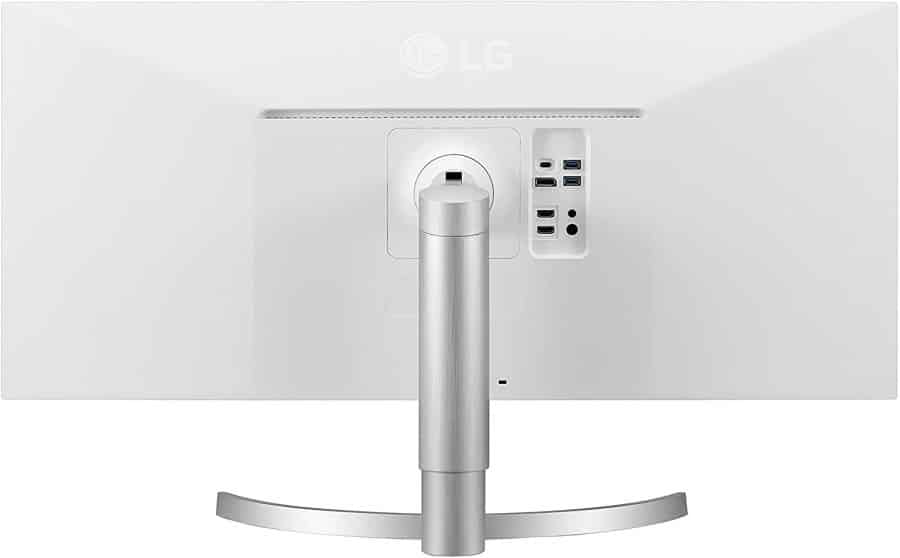 The LG 34WL850-W is designed just like many of the brand’s monitors, but that doesn’t mean it looks bad in any way. The device uses a matte white chassis that is somewhat unique and refreshing, especially if you compare it against the sea of matte black options that floods the market. The display is bezel-free on three sides, but you will still see panel borders when the display is in use.

You will also find the ArcLine design stand that’s finished in matte silver on the LG 34WL850-W which signifies that it belongs to the premium segment. The base has a wide reach and is quite deep at a little over nine inches, but it provides excellent stability for the large cabinet. The telescopic upright lets you adjust the height and tilt the screen, but you can’t swivel or pivot it.

Build quality for the LG 34WL850-W is exquisite since there are no signs of cheapness or poor material engineering. Every seam is perfectly matched with each other, while the flat surfaces are smooth and without visible defects. The monitor’s mechanisms are smooth and firm, but they could also a be a bit stiff for some users at first.

The LG 34WL850-W doesn’t need buttons for surfing through its numerous presets and settings in the OSD. Users can enjoy the brand’s On-Screen Control feature which lets you tweak the settings directly from your desktop with your mouse and keyboard. This add-on eliminates the hassle of reaching for pesky buttons in the dark, especially if you regularly adjust something such as the backlight’s brightness.

The biggest selling point of the LG 34WL850-W aside from its good looks and promising IPS panel is its connectivity set. The layout includes your typical DisplayPort 1.4 that is flanked with two HDMI 2.0 connectors as backups. There is a pair of USB 3.0 receptacles for accessories, but what stands out is the USB-C Thunderbolt slot that offers excellent convenience for ultrabook users. 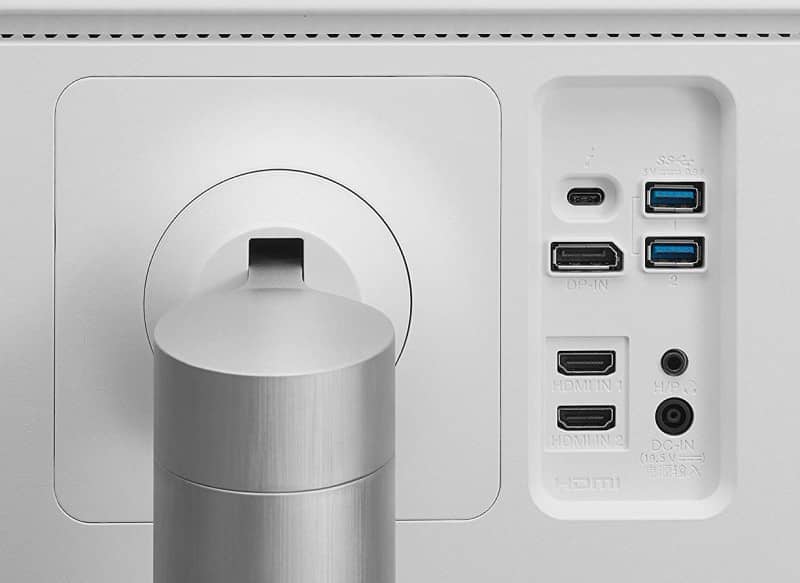 The USB-C accepts video input when you dock a compatible laptop like the Apple MacBook Pro while simultaneously charging its internal battery. This feature eliminates the mess of multiple cables, but its charging output is limited to 60 Watts. So for the laptops with beefier specs, you might still need the proprietary charger for heavier tasks.

The LG 34WL850-W also gets upgraded speakers that are capable of a 7-watt output on each channel. We like that they can get louder and are more detailed than the usual one’s manufacturers tend to use for built-ins. They are great for music and movies, but you can’t expect a booming bass response from them.

The LG 34WL850-W sports a 34-inch Nano IPS panel with a 3440 x 1440 resolution, 60Hz refresh rate, and 5ms response time. The backlight is limited to 350 cd/m2 despite having VESA’s DisplayHDR 400 certification, while the contrast ratio is rated at 1000:1, unlike other Nano IPS variants we’ve seen. These specs are more for work than play, and LG advertises that they had creators and designers in mind when they released this model.

You don’t have to worry about image softening or pixelation with a 3440 x 1440 screen since its pixel density is more or less comparable to a regular 27-inch 1440p display. You get more than twice the space compared to a 1080p screen with this model, while the exponential increase in pixel count takes care of sharpness and detail.

The LG 34WL850-W is capable of excellent color accuracy, but its gamut coverage is too low compared to the company’s claims. The Nano IPS panel only produced 97% of the sRGB color space, but its accuracy was fantastic by default with a Delta E average of only 1.5. Color temperature is slightly higher than the 6500K standard, but it doesn’t make the screen deviate too far from what’s natural.

Contrast is also lower than expected since the LG 34WL850-W only managed a maximum of 840:1 at reasonable brightness levels. This limitation made the screen look grayish or washed out when viewed in the dark. Gamma, on the other hand, faired better at 2.19, so it did not worsen the images in a noticeable way.

One of the culprits that caused the poor contrast is the uniformity of the LG 34WL850-W’s panel. There were leaks at one corner of the bottom strip and along the top which added some clouding to the screen’s output. Contrast and color uniformity is affected, so we hope this doesn’t continue to be the trend on all units already in the market.

The LG 34WL850-W isn’t a gaming monitor and it has a limited refresh rate, so it doesn’t come as surprising that its prone to blurring. You need to use the monitor’s overdrive feature to help it overcome some of the persistence and ghosting that became visible during testing. The best setting is the middle level called Fast since it doesn’t induce overshoot like the maximum.

The LG 34WL850-W is a FreeSync-compatible monitor so its best used with power Radeon cards like the 5700XT. This model isn’t certified to be G-Sync compatible, so you have to test it out manually since results may vary depending on your setup. Input lag sits at 9ms at 60Hz, so casual gamers don’t need to worry about delays while playing.

The LG 34WL850-W offers a promising package of specifications and design, but it falls short in some of its key characteristics. You get excellent color fidelity as soon as you assemble and power it on for the first time, but the poor contrast ratio somehow pulls this down. The panel in the test unit suffered a lot from backlight bleeding, but we know this characteristic wildly varies between unit to unit.

However, we think that the LG 34WL850-W has some value in the market due to its Thunderbolt 3 connectivity and superb functionality. Monitors with this kind of skillset usually cost over a grand, so you save $200 or more if you buy this model. Its not perfect, but it won’t disappoint the right buyer either, especially if they only need a utilitarian daily driver that can double as a dock for USB-C laptops.