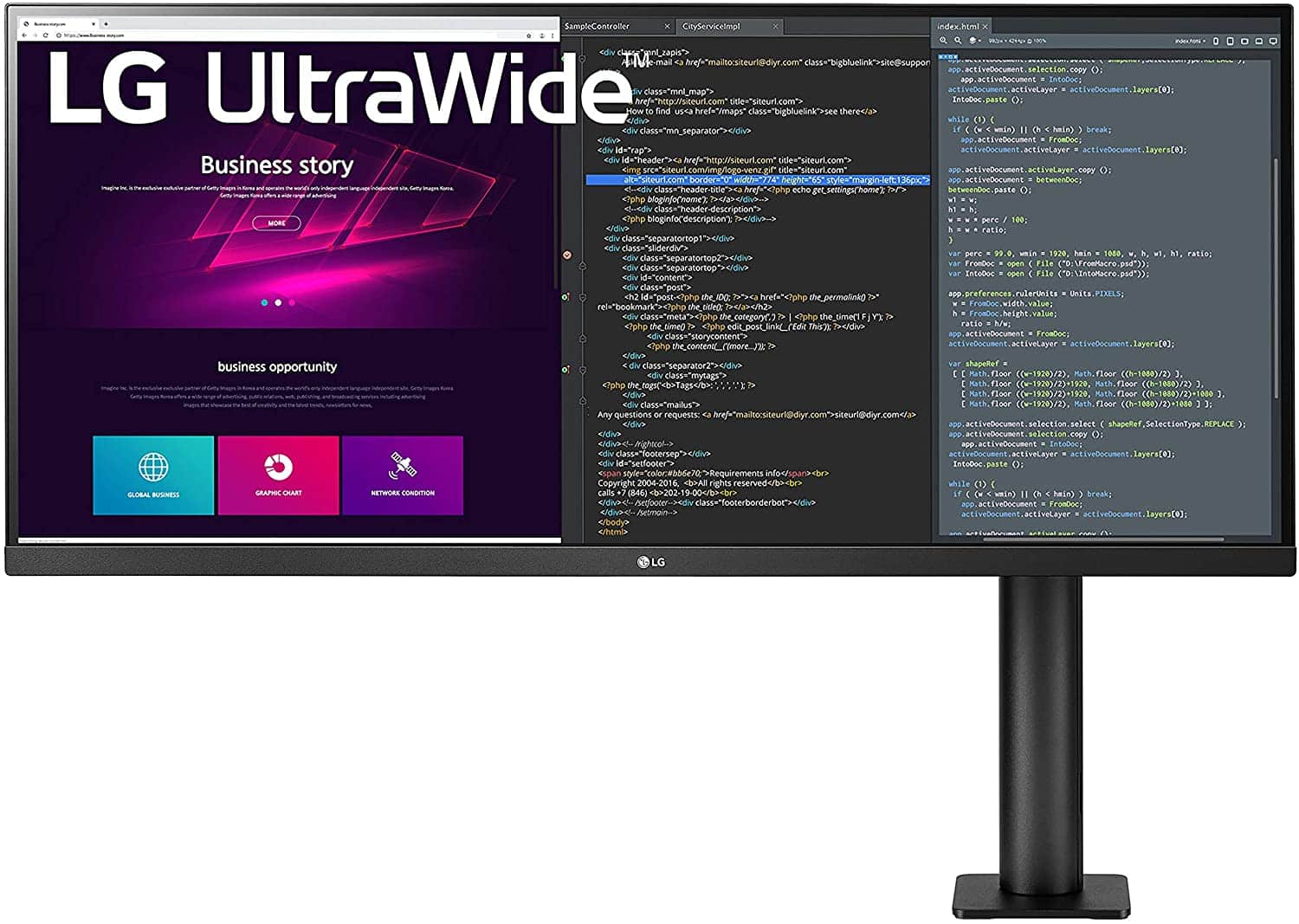 The LG 34WN780-B combines two beneficial characteristics you won’t normally get without buying two different display variants. It offers an expanded screen that’s great for productivity but it also saves space thanks to its unique ergonomic design. It’s also reasonably priced, so what’s left unchecked is its imaging performance which matters above anything else. 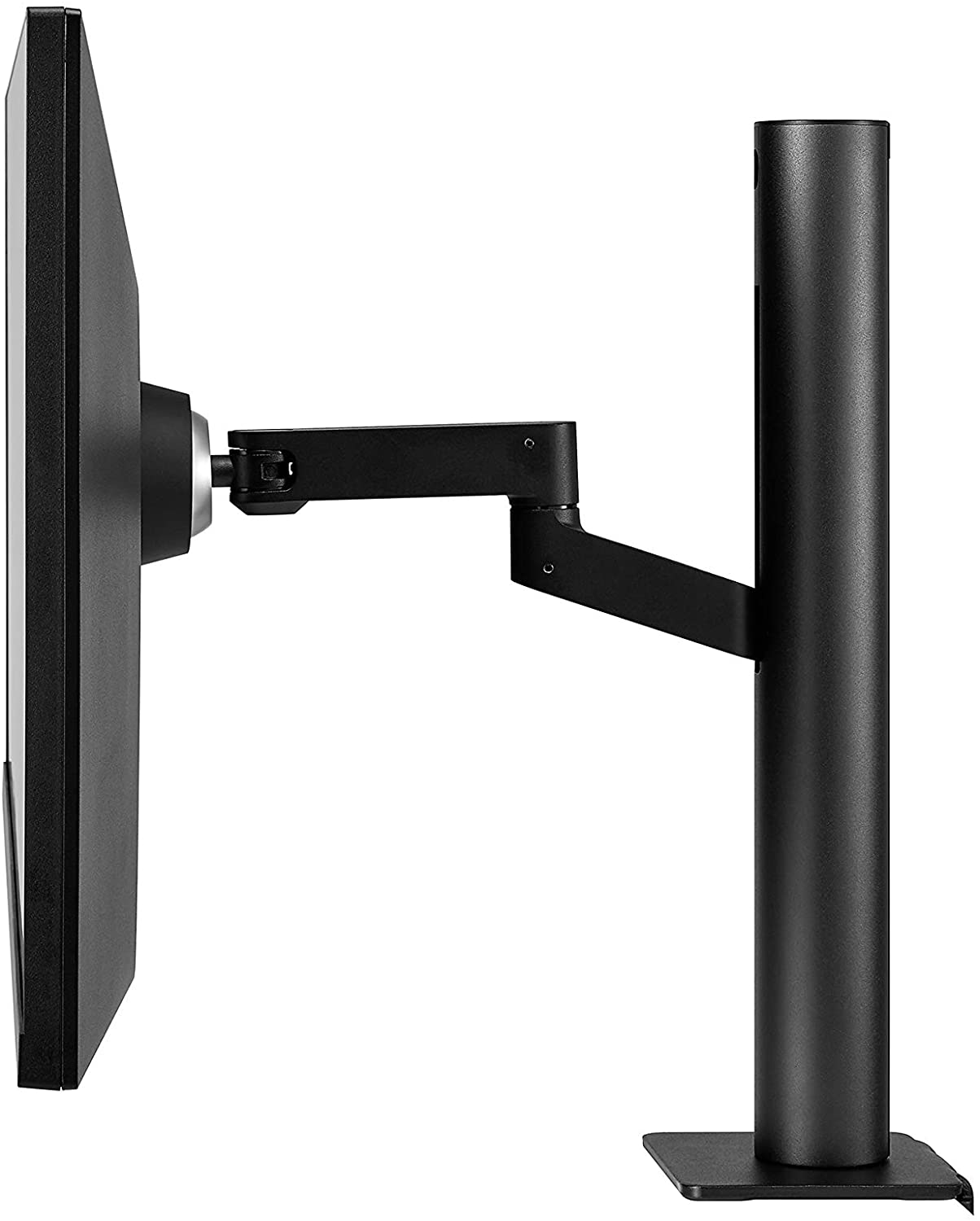 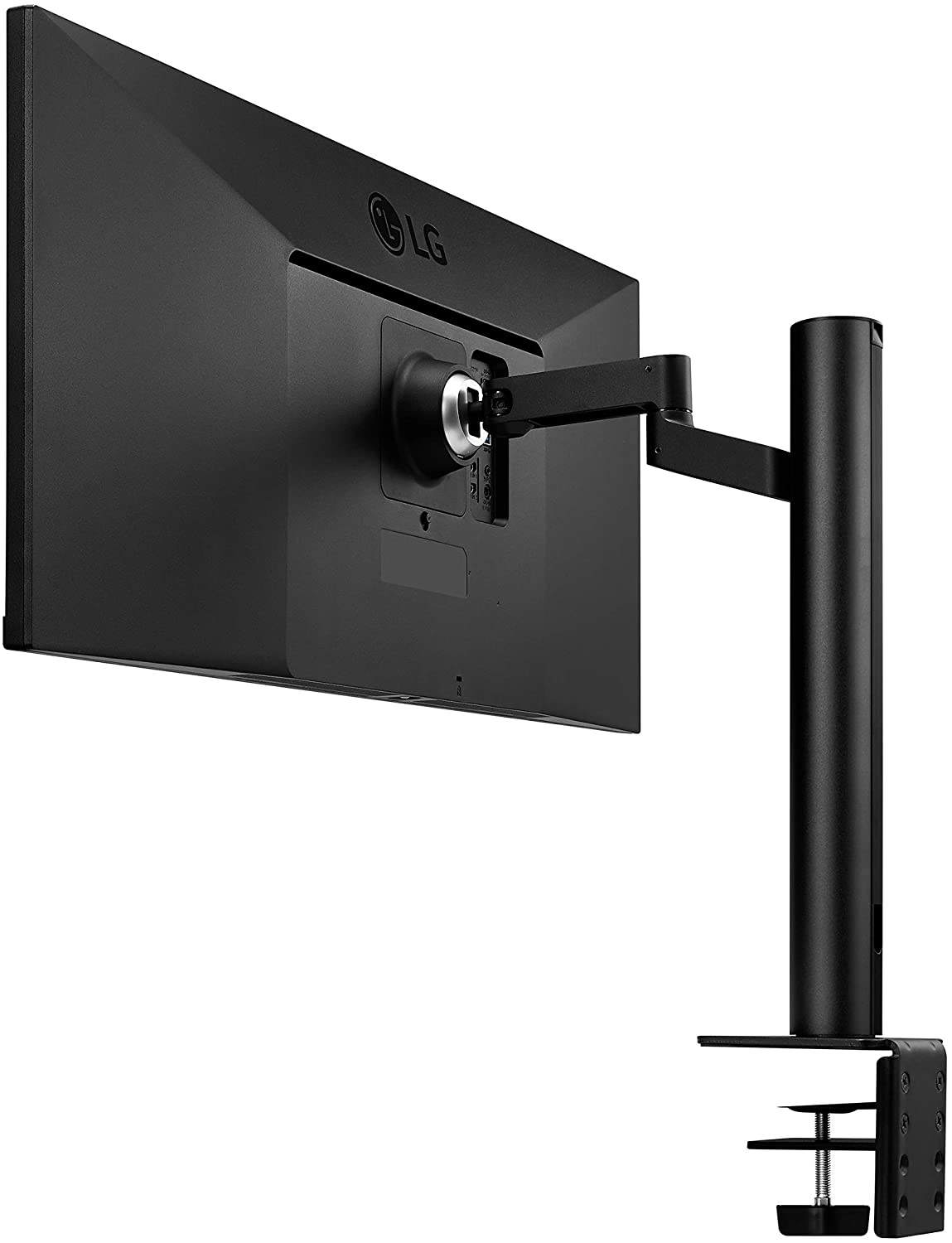 The LG 34WN780-B starts out as a modest monitor that would look nice in either a gaming setup or a business environment. The monitor has a matte black chassis that always looks clean and is quite easy to maintain since it doesn’t attract dirt or smudges. The display is bezel-free on three sides so the screen looks even bigger when it’s in use.

The device itself needs a whopping 16 inches of depth, but you have to remember that it only needs the edge of your desk for its c-clamp. So the monitor basically doesn’t consume your desk space, allowing you to create a neat and maximized workspace. It is quite heavy compared to most desktop monitors and a bit trickier to set up, so asking for help would be wise to avoid catastrophe.

Build quality for the LG 34WN780-B is amazing even if the LG 34WN780-B is cheaper than many of its contemporaries. The plastics used are thick and sturdy, so they won’t crack or flex despite the monitor’s weight. We know that it’s also worrying that the large cabinet is hanging from  a 90-degree stand, but you shouldn’t worry since it will not sag or crash if you clamp it to a strong surface properly.

The LG 34WN780-B also has an OSD joystick that we’re fond of because of its convenient location right under the brand’s logo. You can also use the brand’s OnScreen Control app which lets you manipulate some settings directly on your Windows desktop. This combination is already very user-friendly so there is no need for premium add-ons like remotes.

The stand included with the LG 34WN780-B isn’t like most that are included with typical desktop monitors. It’s basically a VESA arm that clamps to the edge of your desk, providing tilt, swivel, and height adjustments for the screen. You can’t pivot the display, but you can retract or extend it towards you depending on how close you want it to be to your face.

This monitor is one of the rare cases that will not ever give you the need to spend on a VESA mount because it’s already provided. However, you need to make sure that you have a desk surface that’s thick and sturdy enough so the stand’s clamp can grip it properly.

Its connectivity offers standard features such as DisplayPort 1.4 and two HDMI 2.0 ports for your devices. It also has USB ports for accessories, plus a 3.5mm jack for convenience. However, it lacks USB-C which is arguably the essential feature for business products like this since almost every workstation laptop has them.

The LG 34WN780-B includes the brand’s MaxxAudio speakers which have 7 watts of power each. They sound more potent than most built-ins, so they can be used for movies and music. Games will still sound better for games since they are more immersive and focused on specific audio signatures.

1440p ultrawides are slightly less sharp than their 16:9 counterparts, but they still are considered as an upgrade in that department. It can produce crisp images without making visibility suffer, plus you get more room for a wider FOV in games or for multitasking. It takes some getting used to, but many have attested that they will never go back to regular monitors after enjoying an ultrawide.

The LG 34WN780-B renders 99% sRGB as advertised so it’s sufficiently and decently vibrant for regular use. What’s great about it is its default accuracy which has a deltaE average of 0.98 which is excellent for its category. The monitor is ready to use out of the box so most users won’t have to bother with tweaking it to get great color.

Calibrating the LG 34WN780-B reduced its dE average to 0.49 which is even better if you are using it for editing work. However, the improvements are almost unnoticeable to the naked eye, so users who plan to use it for basic tasks won’t need to get a colorimeter to tune it. The gadget itself isn’t cheap, so it is impractical unless you will use this monitor to generate income in that specific field.

The LG 34WN780-B managed to reach 328 cd/m2 at 100% brightness, but its contrast is limited to 967:1 at 50%. That’s expected from an IPS panel, but many new models have exceeded that result with better-tuned panels and special treatments. However, most IPS panels are still unable to produce deep blacks, and you should keep this in mind if you are choosing it for your next upgrade.

Panel uniformity could use some improvements since there were light leaks at the top edge of the screen. It’s not disturbing in full-color or white backgrounds, but it adds some clouding while viewing dark scenes. This could vary between every LG 34WN780-B made, so there are better units out there in the wild.

the LG 34WN780-B has a 75Hz refresh rate which adds a bit of headroom, but it’s still prone to blurring in fast-paced scenes. Setting its overdrive to its Fast level improved this, but sensitive users will still see some persistence in select instances. We don’t recommend the max level since it will add a bit of overshoot but feel free to test it out so you can see which works best for you.

The LG 34WN780-B is a FreeSync monitor and it works with G-Sync if you force it via Nvidia Control Panel. It’s nice to have protection against tearing and stuttering since the resolution is still demanding even if it is limited to 75Hz. Input lag sits at 8ms at 75Hz, so there is no need to worry about sluggishness while using the display.

The LG 34WN780-B is a great choice if you want a reasonably-priced ultrawide monitor with productivity and functionality in mind. It offers a pre-calibrated screen that is accurate out of the box while its unique design takes care of ergonomics and saving your desk from clutter. It is also capable of decent gaming performance, although we know the 75Hz limit will be a deal-breaker to some.

However, the LG 34WN780-B is lacking a few features that are essential for its class such as USB-C connectivity. It is also incapable of deep contrast levels which results in high black luminance scores, but that’s expected from IPS monitors. It’s a great option for mixed-use, but gaming variants with decent imaging performance like the Gigabyte G34WQC are more affordable and versatile.=

Search
NEW
POPULAR
You are here: Home / Reviews / LG 34WN780-B Review – Ultrawide Ergo Monitor for Mixed Use – Recommended
This website uses cookies to improve your experience. We'll assume you're ok with this, but you can opt-out if you wish.Accept Read More
Privacy & Cookies Policy