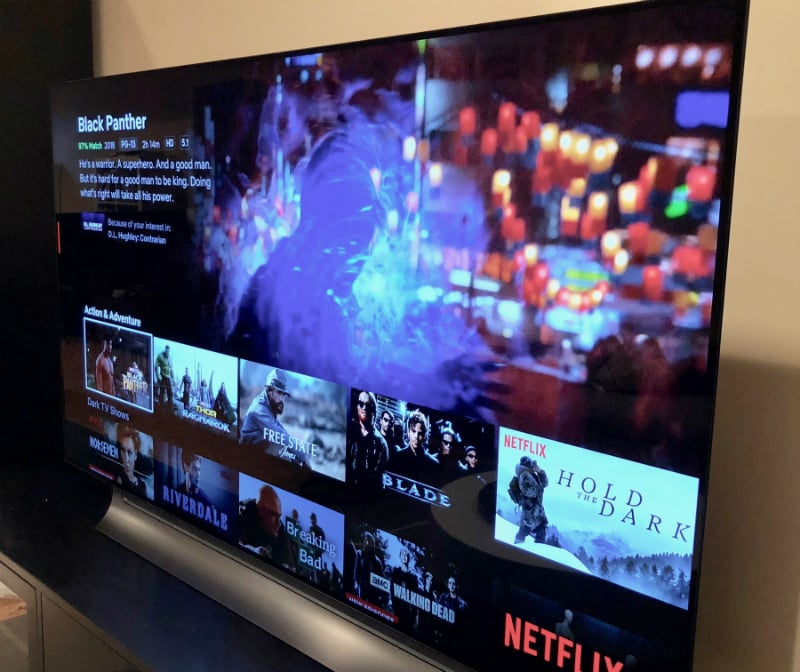 The LG C8 is, hands down, the best HDR television in the market that isn’t exorbitantly priced despite the fantastic image quality it provides. There are higher-end options like the LG G-Series, but this model is the sweet spot that offers more per dollar you spend. The LG C8 is brilliant for games and movies, but let’s check out what you can expect from this beautifully-designed room centerpiece.

The LG C8 is one of the finest looking electronic devices in the market thanks to a sophisticated and minimalist design. The screen itself is unimaginably thin, delivered by the parameters and specifications of the OLED display. There are no bezels, but there are flushed panel borders which are very thin and unnoticeable even when the TV is in use.

The actual cabinet of the LG C8 is more or less two inches thick and is limited to the lower half of the rear. The connectors are spread out intuitively in this general area for the convenience of the user. Most of the audio connectors such as the Optical Audio out are readily visible, along with the primary HDMI 2.0 slot and two USB 2.0 receptacles. 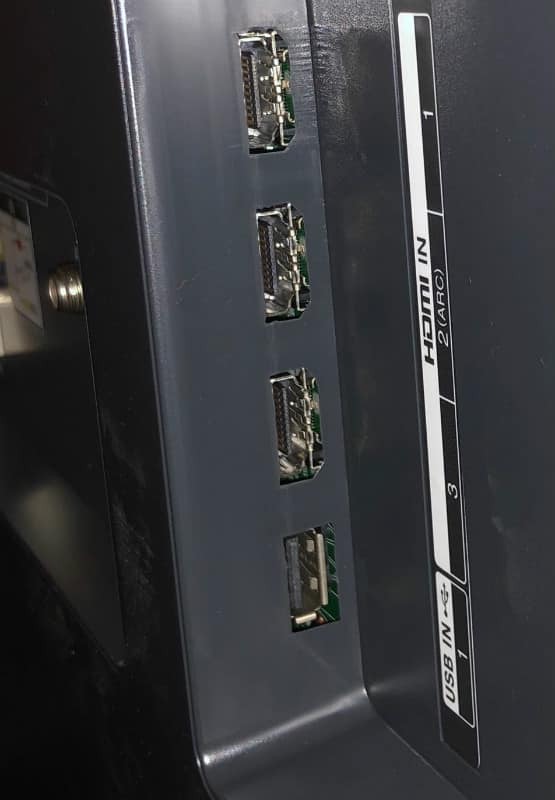 You will find another USB slot and three HDMI 2.0 connectors at the right side of the bulge (facing the rear) to handle other input devices. The LG C8 is equipped to handle pretty much every 4K HDR device out there such as the Xbox One X at the same time.

The LG C8 comes with a gunmetal base that has a nice curve and a wider girth which requires a screwdriver for assembly. It’s worth noting that you need a helping hand to assemble and position this TV since the display is fragile due to its thinness. The redesigned base looks elegant and refined, but its width might pose problems when finding a surface or stand to place the device on.

The LG C8 stands tall and strong, plus it has excellent build quality despite the very thin display frame. Every bit of the device feels nice to the touch since there are no burrs or uneven seams. It’s also very ideal for wall mounting because it will sit almost flush to a wall, but there lies one of the dilemmas we can foresee.

Of course, a luxurious device like the LG c8 should be placed like a centerpiece for any room. Placing it on a TV stand or a shelf will let you appreciate its aesthetic and thinness, but it becomes risky when there are children about. The depth of the stand doesn’t provide a lot of stability, so something as simple as a nudge could topple the device.

Another excellent feature of the LG C8 is the 2.2 Channel speakers with 40W of power and Dolby Atmos capabilities. The set is definitely a cut above the rest of the built-ins we’ve seen and tested and should last a while to allow you to save for a better system. The only reason to upgrade we see is if you have enough dough to spend on a full Dolby Atmos setup(which could cost thousands by itself).

The LG C8 comes in three sizes, starting with a 55-inch, a 65-inch, and finally, a massive 77-inch which should be enough to cover a section of your wall. All variants come with an OLED panel with a 3480 x 2160 resolution, 120Hz refresh rate, and less a less than 1ms response time. It these specs that make OLED TVs fantastic for PC gaming and consoles like the Xbox One X, aside from its unrivaled capabilities in HDR representation.

Once set up, the LG C8 will impress most users with its amazing vibrancy and depth, thanks to the capabilities of OLED technology. The 4K HDR TV is capable of an impressive 97% DCI-P3 with a DeltaE of only 2.10, beating several HDR monitors we’ve tested. One noticeable flaw is the slight bluish tint of the screen which is more apparent when the room is lit. 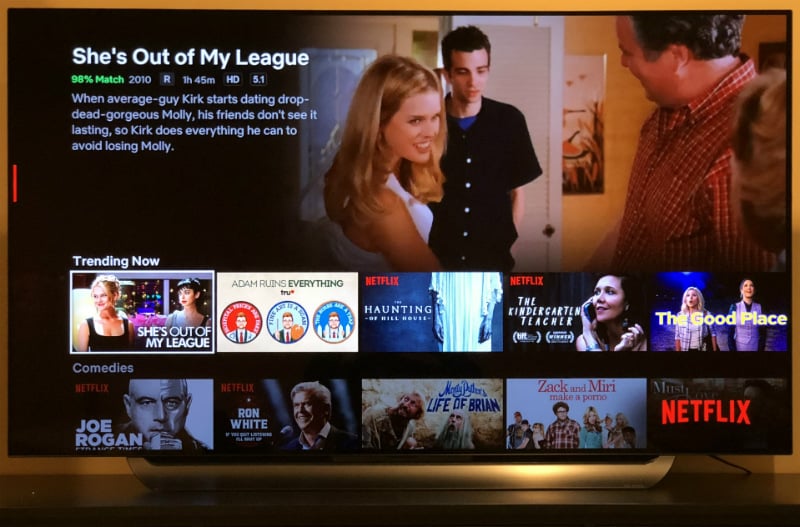 The scores can be fixed with a colorimeter to optimize the LG C8 to a color DE of 1.10 and a 6495K color temperature. Take note that you need a colorimeter like the DataColor Spyder Elite V to attain these scores, which isn’t practical for typical home use. We also recommend to take the time to tinker with the C8’s OSD or use it at night time with the lights out.

We measured a peak or pulsing brightness of 950cd/m2 and average of around 650cd/m2 from the LG C8. HDR content is mastered for a higher output, but this does not affect the TV’s performance in games or movies. Issues plaguing FALD units such as clouding aren’t present since OLEDs are capable of variable brightness outputs on the pixel level.

It’s both mysterious and impressive that we can’t measure the contrast ratio from the LG C8. This is again, due to the individual pixels’ ability to change brightness and create a more detailed output. The result is an unquestionably deep black uniformity which is perfect for games and movies.

Playing HDR-capable games like like Shadow of the Tomb Raider and Destiny 2 with the LG C8 is an experience that is difficult to explain. The colorful parts of the graphics and lighting are extremely vibrant and detailed, while the darker backgrounds of the title are much more convincing. OLED tech adds a depth to these titles that make the experience more profound.

The LG C8 can handle motion perfectly due to its ultra-fast refresh rate brought about by OLED tech. One downside is the TV can only support 4K at 60Hz, although you can activate the black frame insertion feature called Motion Pro in the OSD. Input. The product is fantastic at upscaling 1080p content with great detail thanks to the a9 processor, but it can also run at 120Hz 1080p for faster visuals at the cost of sharpness.

Input lag is excellent for a TV at 21ms in SDR mode, but it rises to a little less than 30ms when HDR is activated. These timings aren’t gaming monitor-level, but delays are still hardly noticeable at this rate. Just don’t forget to turn on Game Mode because without it, you will have to deal with a higher, 50ms input lag.

The LG C8 is by definition, a true smart TV thanks to its WebOS app and the addition of ThinQ. You can control the TV with the remote which also doubles as a pointer, similar to the Nintendo Wii’s controller. ThinQ, on the other hand, allows users to synchronize the C8 with other ThinQ Smart Home devices such as lights and other appliances.

Finally, the LG C8’s ThinQ technology allows owners to manipulate its functions via Google Assistant or Amazon’s Alexa. You can use the remote for voice commands which have drastically improved in the series, but the two mentioned systems will open more possibilities and conveniences.

Thoughts on the LG C8

The LG C8 is hands down, the best 4K HDR OLED TV you can buy that’s well worth its price. This model isn’t the flagship offering, but there is little reason to spend a gruesome amount of hard-earned dough on other variants. The OLED TV’s performance in games and movies is top-notch, while the added features make the experience more profound.

These aspects combined with the design mean that the LG C8 could be your staple display for a few years without needing to upgrade. The only universal caveat we see is the burn-in these OLED products are prone to if extra care isn’t applied. Just avoid using the C8 or similar models for static images or shows with banners such as the news, and you are pretty much golden.

Search
NEW
POPULAR
You are here: Home / Reviews / LG C8 Review – 4K OLED HDR TV For Games and Movies – Editor’s Choice
This website uses cookies to improve your experience. We'll assume you're ok with this, but you can opt-out if you wish.Accept Read More
Privacy & Cookies Policy
Necessary Always Enabled
Share This