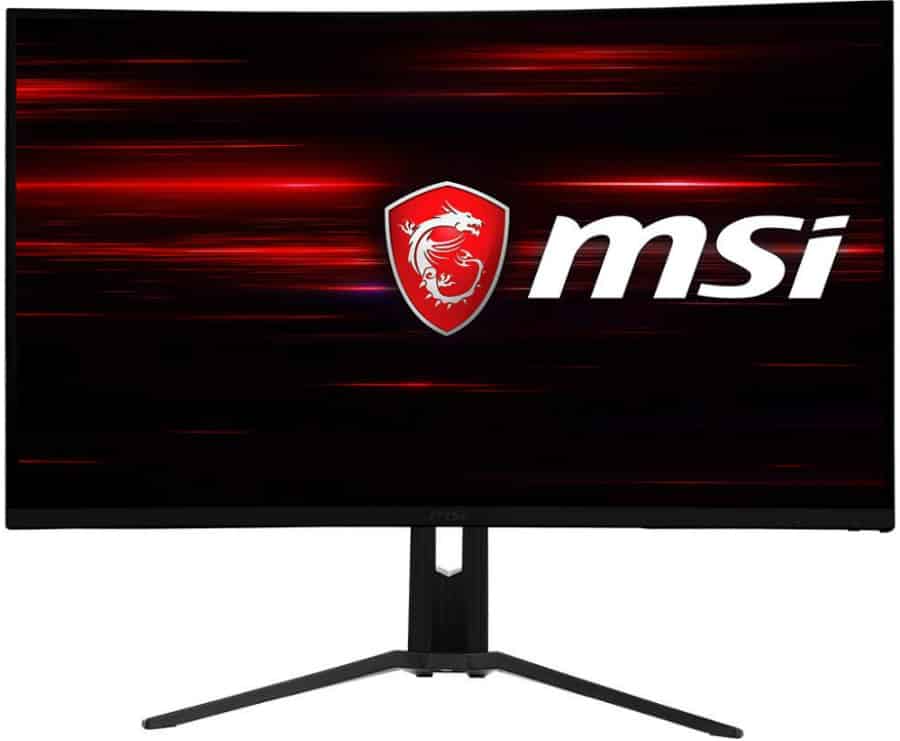 The MSI MAG321CQR offers a large curved screen with deep colors and contrast that’s wrapped in gaming goodies many will love. This model is a direct competitor to the AOC CQ32G1 when it comes to technical specifications, but is better dressed and equipped for the usual gaming occasion. The MSI MAG321CQR promises excellent imaging and gaming performance, but is the extra premium worth every cent? 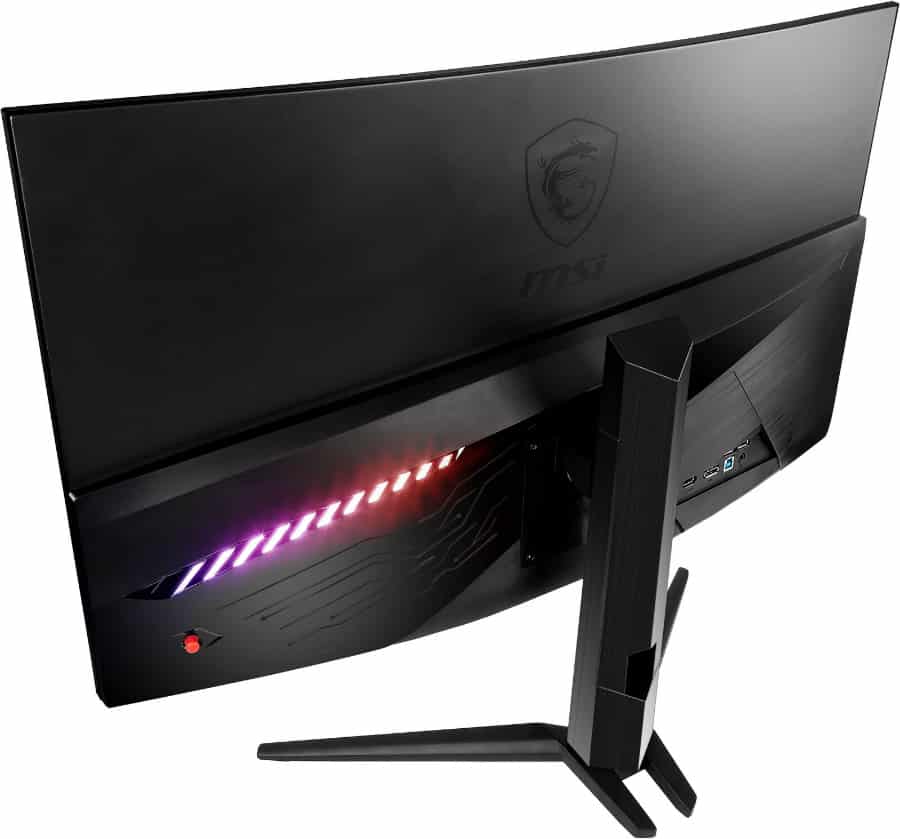 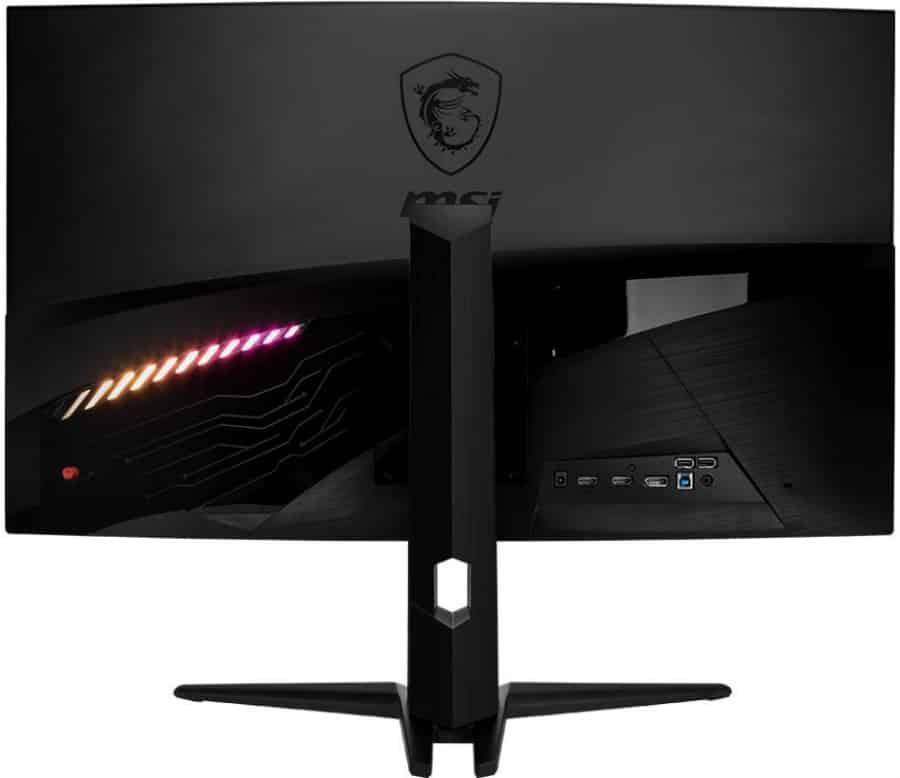 Gamers will love the MSI MAG321CQR’s design which focuses on aesthetics which is suitable to the tastes of the enthusiast crowd. The chassis has a mixed matte and brushed texture all over, with a few accents done in a glossy finish. The screen isn’t entirely bezel-free, but the borders are thin enough to remain unnoticeable.

The rear of the casing holds most of the MSI MAG321CQR’s aesthetic value while the front adopts a stealthier look. There is a programmable RGB LED strip at the back which responds to the Mystic Light Sync app from the brand. It’s a nice touch, but frankly, its positioning limits its bias lighting capabilities to one side of the monitor.

The VA panel on the MSI MAG321CQR has a 1800mm radius which means its more pronounced than other curved displays such as the Asus PG348Q. We think the benefits of a curved monitor diminishes the smaller you go, so it’s more suited for the more significant variants. This product’s size enhances that sense, creating a more enveloping visual experience than its smaller siblings in the lineup.

There is an OSD joystick at the rear of the MSI MAG321CQR which makes controlling the monitor easier on its users. It’s placed near the corner, so you don’t have to bend over regularly to reach the controls to change brightness or swap between presets.

Build quality for the MSI MAG321CQR is pretty decent and has improved over its recent display product cycles. The seams are even, and there are no sharp edges or burrs which tells us that MSI uses tight quality control measures on its premium products. The plastics feel thick and durable, while the stand did not show any wobbling or creaking even when trying to adjust the screen.

What makes the MSI MAG321CQR a more attractive option than the AOC CQ32G1 aside from the design is it can adjust height apart from tilting.  The Y-shaped base provides excellent stability, while the edginess of its design makes it more attractive. You can opt out of this mechanism in favor of a 100 x 100 VESA mount if you need a more flexible setup.

The MSI MAG321CQR is a FreeSync monitor, so it doesn’t come with connectivity restrictions imposed by an exclusive FPGA controller. You will find a DisplayPort 1.2 and two HDMI 1.4 ports for video inputs along with three USB 3.0 connectors for accessories. There are no speakers, but these weak-sounding built-ins are rarely missed for the device’s primary purpose.

The MSI MAG321CQR sports a 32-inch curved VA panel with a 2560 x 1440 resolution, 144Hz refresh rate, and 4ms response time which can be boosted via a 1ms MPRT feature. A high contrast average of 3000:1 is also specified along with a 300 cd/m2 backlight which is reasonable for gaming. The 1800r curve adds a nice hint of immersion which is more beneficial for more substantial screens when it is used for games or movies.

The 32-inch size of the MSI MAG321CQR’s most noticeable difference is its lower pixel density due to the resolution stretching out to a broader diagonal. We don’t feel the need to complain even if the pitch is almost directly comparable to a 24-inch 1080p variant since the extra pixel count still pumps out more details. Images do look a bit softer, but the cleaner lines and extra sharpness brought about by the higher pixel count is still there.

The MSI MAG321CQR posts great results once scrutinized with a colorimeter to check its imaging qualities. The VA screen pumps out 100% sRGB or 86% Adobe RGB gamut coverage which falls a bit short of our expectations for VA panels, although it’s sufficient for most cases. Color accuracy reaches a DeltaE of only 1.6 with only a few adjustments, giving us excellent fidelity in games and movies.

Contrast also doesn’t reach our expectations, but it’s good enough at an average of 1820:1 when a reasonable brightness level is used. The only challenging aspect of the MSI MAG321CQR’s screen to manipulate is its gamma which doesn’t have dedicated controls. You can, however, try to move it to ideal points using the product’s Black Level settings.

It’s a crude method, but the results are flexible enough to allow gamers to find a neutral preference for games and regular use. We recommend setting the Black Level to its 9th level which will give you an equivalent to gamma 2.1.

We can’t call the MSI MAG321CQR’s panel uniformity excellent since it isn’t perfect due to the slight clouding at the bottom corners due to the uneven illumination. It’s noticeable when viewing an all-black image, but game visuals or movies somehow manages to cover it up unless you stare at a particular quadrant for a minute. What’s great is that color uniformity is only mildly affected with variances between sections of the display staying at DeltaE 2.1 from the D65 standard.

Motion handling isn’t the MSI MAG321CQR’s strongest suit since it requires its fastest overdrive level to be used along with ELMB. This limitation shouldn’t be a cause for concern for most users, but competitive gamers who play fast-paced titles like Apex Legends or CSGO might want to consider our recommendation.

The MSI MAG321CQR is a FreeSync monitor with makes it a great pair for the new Radeon VII graphics card, but sadly, it’s G-Sync compatibility is limited. It’s a bit tricky to enable the feature since this model isn’t fully certified and some of the tricks posted online do not work 100%. Input lag sits at an average of 15ms, but its fast enough not to induce delays which can be detrimental to competitive gaming.

Thoughts on the MSI MAG321CQR

The MSI MAG321CQR has very commendable strong points, but some of its limitations might make it an average option in the eyes of the meticulous gamer. The screen’s image quality passes most reasonable expectations for gaming monitor excellence, but the device falls short of a few of its claims. We love the design of the display which has seen drastic improvements during the brand’s monitor product evolution in the past few years.

However, you’d really have to like the MSI MAG321CQR’s design and its upsides to justify its higher price tag over similar competitors like the AOC CQ32G1. The lack of essential OSD features such as Gamma settings needs improvements to make the monitor more responsive to the needs of various users. It’s a decent option worthy of the top five picks at least, but its higher price is a difficult pill to swallow.