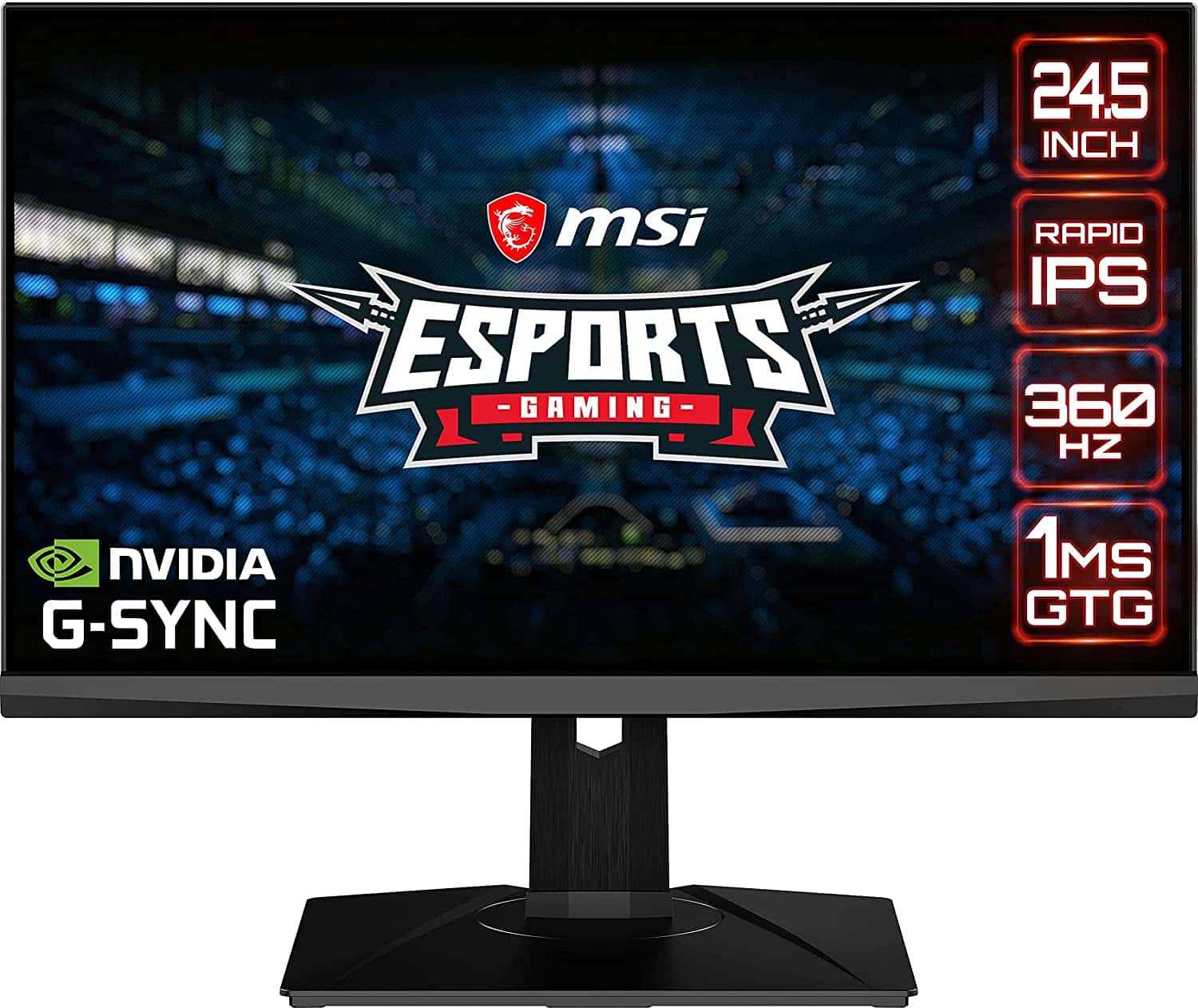 The MSI Oculux NXG253R rises to the challenge of the 360Hz monitor category as a better-priced alternative to the likes of the Asus PG259QN. The monitor promises fantastic performance to give the extreme gamers every advantage possible in the heat of battle. Let’s see if the MSI Oculux should be your next buy if you are looking to upgrade and ready your gear for E-Sports glory. 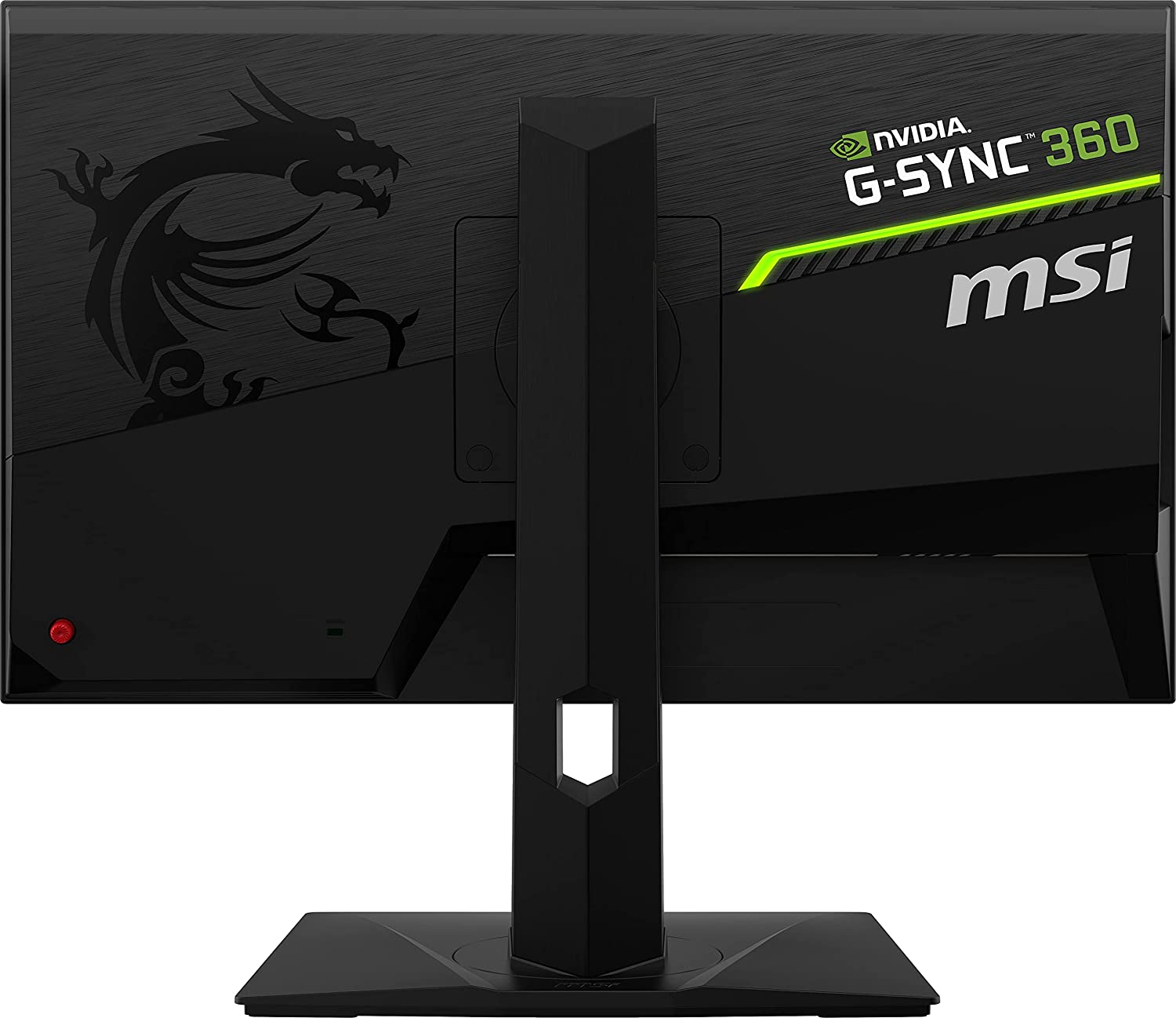 The MSI Oculux NXG253R looks less aggressive than its predecessors, adopting a sleeker overall appearance like recent releases such as the MSI MAG251RX. The monitor has a matte black chassis with subtle lines, although its rear still has the gamer-centric decorations you can expect from the brand. The display itself is bezel-free on three sides with thin inner borders that show up when it’s in use.

It’s also obvious that the MSI Oculux NXG253R won’t be bigger than most monitors you typically encounter in school or at the office. It needs a little over 9 inches of depth due to its large base, but that’s okay since it’s flat and can be used as a pedestal for small peripherals. It’s heavier than some 25-inch monitors at 14.3 pounds, but setting up isn’t a two-man job.

Build quality for the MSI Oculux NXG253R is great thanks to the generous amount of metal reinforcement under its plastic parts. They make the monitor heavier, but adding them provides a layer of protection against breakage. The monitor itself is pristine and free from defects, plus there is no wobble caused by a flimsy stand.

The MSI Oculux NXG253R uses a red joystick that’s conveniently located at the rear lower corner for easy access to its OSD. You have to reach in to get to it from the front, but that’s better than pressing different buttons numerous times. You can even program its four directions to bring up a specific sub-menu according to your needs or liking.

Another notable feature of the MSI Oculux NXG253R is its LED strip at the back which can be used to match your theme if you have other MSI gear as well. We always like LED strips since they can be used as bias lighting, but the strip’s offset towards the side mean it cannot disperse an even glow behind the monitor. it’s a nice decorative feature, but we’d like everything to have a useful function that contributes to the user’s experience in a way.

The included stand is ergonomic, so getting a good viewing angle is readily doable out of the box. You can tilt, swivel, pivot, and adjust the height of the stand so it will work well for any orientation you might want or need for your setup. You can also use VESA mounts, but that’s unnecessary unless space is tight or if you have multiple screens.

The layout on the MSI Oculux NXG253R includes DisplayPort 1.4, two HDMI 2.0 slots, and four USB 3.0 ports for accessories and data transfers. You also get a 3.5mm jack for convenience, although we know that most use the motherboard’s slots for audio solutions anyway. It has everything you need for PC and console gaming, but we wish it had USB-C like the MAG251RX.

Another minor letdown on this monitor is it doesn’t have speakers which we feel should be included in the package. It’s understandable that the price you pay for it goes to the 360Hz panel and its prestige, but monitors over $500 usually include it. Again, it’s a minor limitation, but it would extend the value per dollar this offering stands for.

The  MSI Oculux NXG253R sports a 25-inch IPS panel with a 1920 x 1080 resolution, a 360Hz refresh rate, and a 1ms response time. The backlight has a 400 cd/m2 maximum while the contrast ratio is listed at 1000:1 like most IPS panels. It also advertised as HDR-ready, although no extended gamut coverage was listed for it on the official product page.

1080p monitors are the universal standard so we know you won’t struggle with adjusting your senses while using this monitor. it’s a downgrade if you are coming from 1440p or 4K, but it’s still clear and more legible than the others. Reading and browsing will be easy on your eyes and 1080p doesn’t take much to run and get high framerates.

The provides a little over 100% sRGB and around 75% of DCI-P3 which are decent for daily use and competitive gaming. Its default accuracy isn’t the best, but most will be happy with the 2.21 deltaE average. The screen looks great out of the box so gamers won’t have to expend hours and hours trying to balance out its screen.

Calibrating the MSI Oculux NXG253R with a colorimeter lowered the dE average to 0.93 which is great for a gaming monitor. However, it’s not worth the trouble and cost of the gadget since the improvements won’t be as noticeable while gaming. We understand that some also work with editing and content creation, but you are better off spending big bucks on a model geared for that.

The backlight on the MSI Oculux NXG253R peaked at 445 cd/m2 which is blindingly bright for extended hours of use. Its contrast ratio reached 1156:1 at 50% which is excellent, but still insufficient in producing deep blacks. Dark scenes will look a bit washed out at night, but that’s acceptable since it’s a common characteristic of IPS panels.

Panel uniformity for the MSI Oculux NXG253R sample was excellent since there were no major backlight leaks or clouding issues. There are some slight differences in the backlight’s spread, but it’s only noticeable if you scrutinize the screen in the dark. Take note that this can change due to the nature of IPS panels and some manufacturing tolerances.

The MSI Oculux NXG253R’s motion handling and responsiveness are amazing as advertised thanks to its very high refresh rate. The screen is practically free from blurring even if you swipe or pan the screen as fast as you can. You do, however, need a powerful GPU and processor if you want to maximize that 360Hz refresh rate.

It still has a ULMB feature alongside Nvidia’s Reflex Latency Analyzer which requires a compatible mouse connected to a specific USB port. However, ULMB is only usable if your refresh rate falls below 240Hz which is where some of the persistence begins to show up.

The MSI Oculux NXG253R is a G-Sync monitor that’s equipped with a dedicated FPGA controller. This is understandable since the 360Hz monitors such as the Acer X25 were co-developed with Nvidia and its new technologies like the Reflex Latency Analyzer. Input lag sits at a little over 2ms at 360Hz,  making it one of the fastest gaming monitors around.

Thoughts on the MSI Oculux NXG253R

The MSI Oculux NXG253R is an attractive gaming monitor if you want the best possible companion for extreme competitive gaming. It provides fantastic image quality and a kind of quickness that you won’t see on lower-grade models. It’s expensive at $599 when the likes of the PG259QN are so close, but they are discounted now from the $800 or so launch prices.

It is difficult to complain about the MSI Oculux NXG253R since it’s so good and ideal for competitive gaming. our main gripe here is that you have to pay over half a grand for a 1080p gaming monitor which now starts at $160 to $180. However, this is a flagship model with almost three times the refresh rate, so it’s understandable that you have to pay a premium for that.