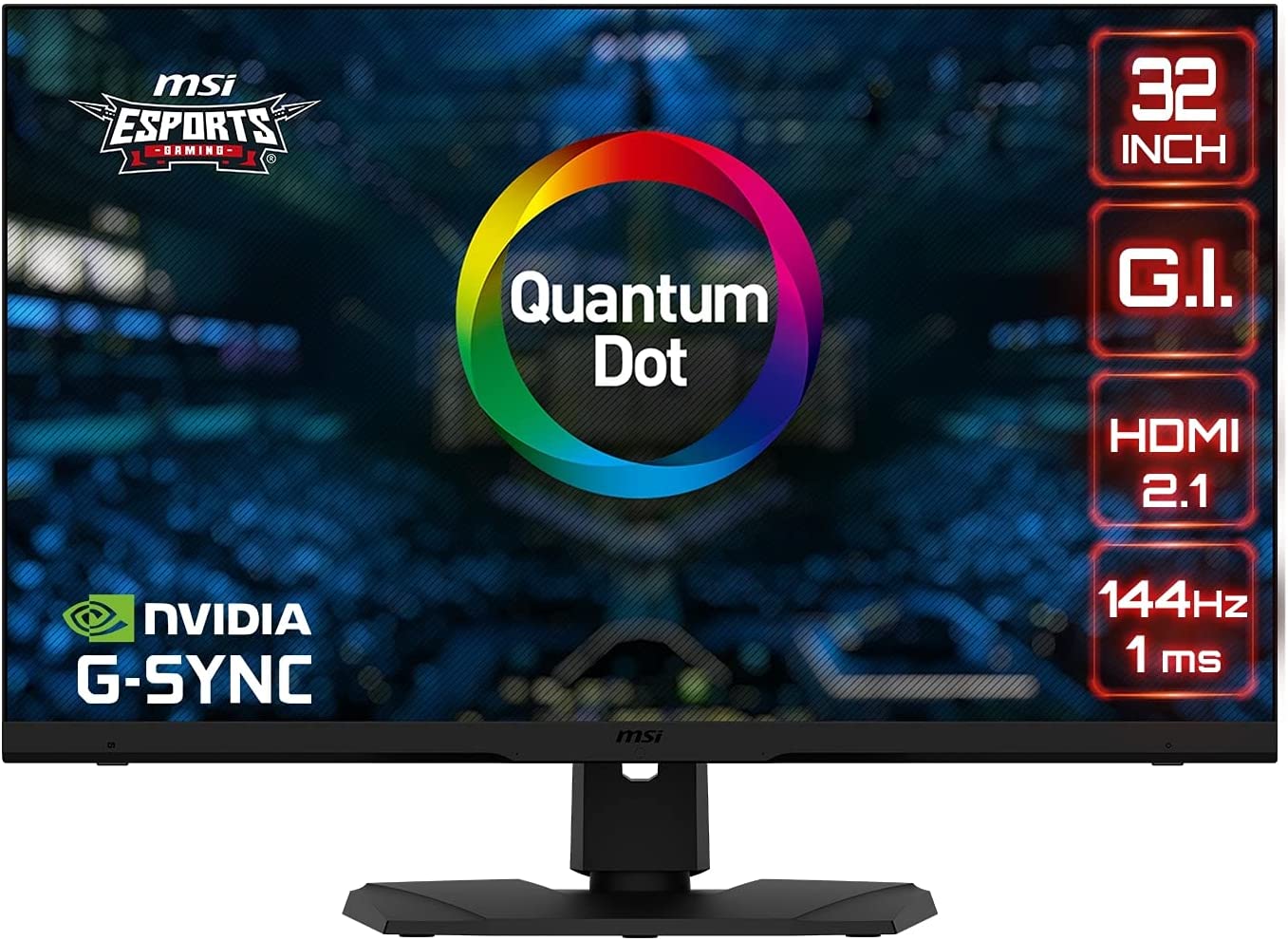 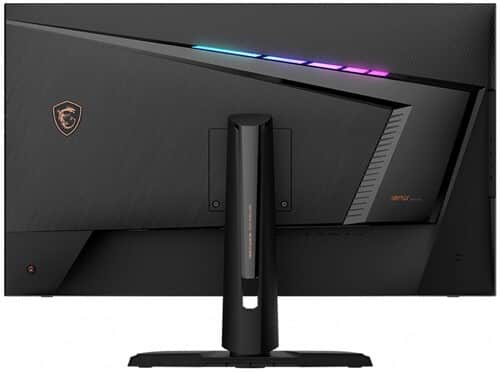 The MSI Optix MPG321UR-QD has a simpler design than older models from the brand, but it still has a bit of gamer-centric aesthetics which make the brand popular. The monitor has a matte black chassis with gunmetal accents that look better than the older black and red combo. The display is bezel-free on three sides so the screen tends to look bigger in some instances.

It’s not a small or usual-sized monitor, so you have to take into account your desk space first before pulling the trigger. It only needs 9.9 inches of depth, but its width might cover your desktop or bookshelf speakers if your desk isn’t wide enough. It’s also the heaviest monitor in its segment at 33.1 pounds, so asking for a pair of extra hands during assembly won’t hurt.

Build quality for the MSI Optix MPG321UR-QD is excellent and it can be considered as a premium model like the brand’s Prestige designer monitor. The materials used are strong and reliable, plus we didn’t see any cosmetic defects during unboxing. The included stand doesn’t slop or wobble so you won’t be disturbed while enjoying your games.

The MSI Optix MPG321UR-QD has an RGB LED strip at the back for added appeal towards gamers and PC builders. It can be synchronized with other MSI gear via Mystic Light, but it’s slanted towards the side so its glow can look awkward. It also includes an ambient light sensor that can automatically adjust the backlight to suit your environment.

The MSI Optix MPG321UR-QD has a joystick for the OSD so you don’t have to fumble around with confusing buttons. It’s easily reachable at the back near the lower corner so you don’t have to strain yourself while trying to adjust a setting. You will also find a dedicated power button with an LED light that glows white when turned on and amber in standby mode.

The stand included with the MSI Optix MPG321UR-QD offers tilt, swivel, and height adjustment for your convenience. It’s easy to get a comfortable viewing angle and you don’t have to worry about wobbling or sagging. It is compatible with VESA mounts, but it’s unnecessary unless your desk has limited space or if you have multiple monitors on deck.

The MSI Optix MPG321UR-QD has an impressive array of connectivity features which makes it more flexible than most monitors. You get DisplayPort 1.4, two HDMI 2.1 slots, and a USB-C with DP Alt Mode for video inputs. You also get six USB type A slots and three type B upstream ports for a multitude of peripherals and the monitor’s KVM function.

But what’s more interesting than its bevy of USB ports is of course the video inputs which makes this monitor the perfect all-in-one display. The DP 1.4 slot was meant for PC gaming, while the two HDMI 2.1 ports support 4K 120Hz operation for the PS5 or the Xbox Series X. The USB-C slot works great for common work laptops like MacBooks, making this model a very good investment.

However, what’s missing from the MSI Optix MPG321UR-QD is a pair of high-grade speakers which would come in handy for some circumstances. However, gamers will almost always prefer headsets or desktop sets since they will sound better and more suited for immersion.

The MSI Optix MPG321UR-QD boasts a 32-inch Quantum Dot IPS panel with a 3840 x 2160 resolution, a 144Hz refresh rate, and a 1ms MPRRT response time. The backlight has a 400 cd/m2 typical output and a 600 cd/m2 peak, while the contrast ratio is listed at 1000:1 like most IPS panels. This model is HDR 600 certified compliant so it’s capable of decent HDR effects in compatible games.

4K looks better at 32 inches than the smaller variants since it is not too sharp for reading and document processing. You still get the improvements brought about by the massive pixel count for sharper images but small objects like letters do not become microscopic. However, your GPU requirements will also rise considerably, so might want to shop around for the top-end or flagship models to ensure high framerates.

The MSI Optix MPG321UR-QD renders more than 100% sRGB and around 93% DCI-P3 for excellent vibrancy in games and movies. Default accuracy isn’t perfect with a deltaE average of 2.97, but that’s acceptable for a wide gamut display. The monitor has sRGB, DCI-P3, and Adobe RGB filters with decent accuracy if you need to control the gamut.

Calibrating the MSI Optix MPG321UR-QD improved its dE average to 1.34 which is great for a gaming monitor. It’s far from a prosumer display, but it can be used for content creation and some editing work. These scores will vary between every monitor due to panel characteristics, but it’s a good measure of what kind of tasks are applicable to the device.

Its backlight reached 421 cd/m2 in SDR and 701 cd/m2 when HDR is active, although it doesn’t have local dimming. The contrast ratio isn’t great at 1045:1 at 50% brightness, but the backlight can expand it exponentially to around 15000:1. This result means that the MSI Optix MPG321UR-QD is one of the better HDR monitors out there, although the lack of granular local dimming is noticeable here.

Panel uniformity for the MSI Optix MPG321UR-QD is excellent since there are no considerable backlight leaks. There are some deviances in the backlight’s spread, but it is only noticeable in select instances such as pitch-black scenes. Take note that this could vary between every unit, so there are worse ones out there.

The MSI Optix MPG321UR-QD has an excellent pixel response time so it doesn’t need too much overdrive. There is some persistence in contrasting transitions, but it’s not as big of an issue compared to its VA counterparts. It even has a backlight strobing feature, but we don’t think it is necessary in most cases.

The MSI Optix MPG321UR-QD is compatible with both FreeSync and G-Sync so you don’t have to lose out on VRR and its benefits. This duality is handy now since the GPU market is quite unstable so getting a specific model from either brand isn’t guaranteed. Input lag sits at 8ms at 144Hz, so it’s still free from delays and “de-synced” instances while gaming.

Thoughts on the MSI Optix MPG321UR-QD

The MSI Optix MPG321UR-QD is a fantastic gaming monitor for enthusiasts that have the latest devices. It is also compatible with workstation gadgets like USB-C laptops, so it’s a good investment for both gaming and professional use. It is capable of great performance in HDR and games, so it’s not lacking in its main premise.

However, the MSI Optix MPG321UR-QD still isn’t cheap even if it is one of the best-priced HDMI 2.1 monitors in the market. It’s only practical for those who have gaming consoles, but it is also a good buy for future-proofing. It’s a great monitor, although it is still prone to the limitations of IPS panels.

Search
NEW
POPULAR
You are here: Home / Reviews / MSI Optix MPG321UR-QD Review – Quantum Dot 4K 144Hz Gaming Monitor with HDMI 2.1 and USB-C
This website uses cookies to improve your experience. We'll assume you're ok with this, but you can opt-out if you wish.Accept Read More
Privacy & Cookies Policy