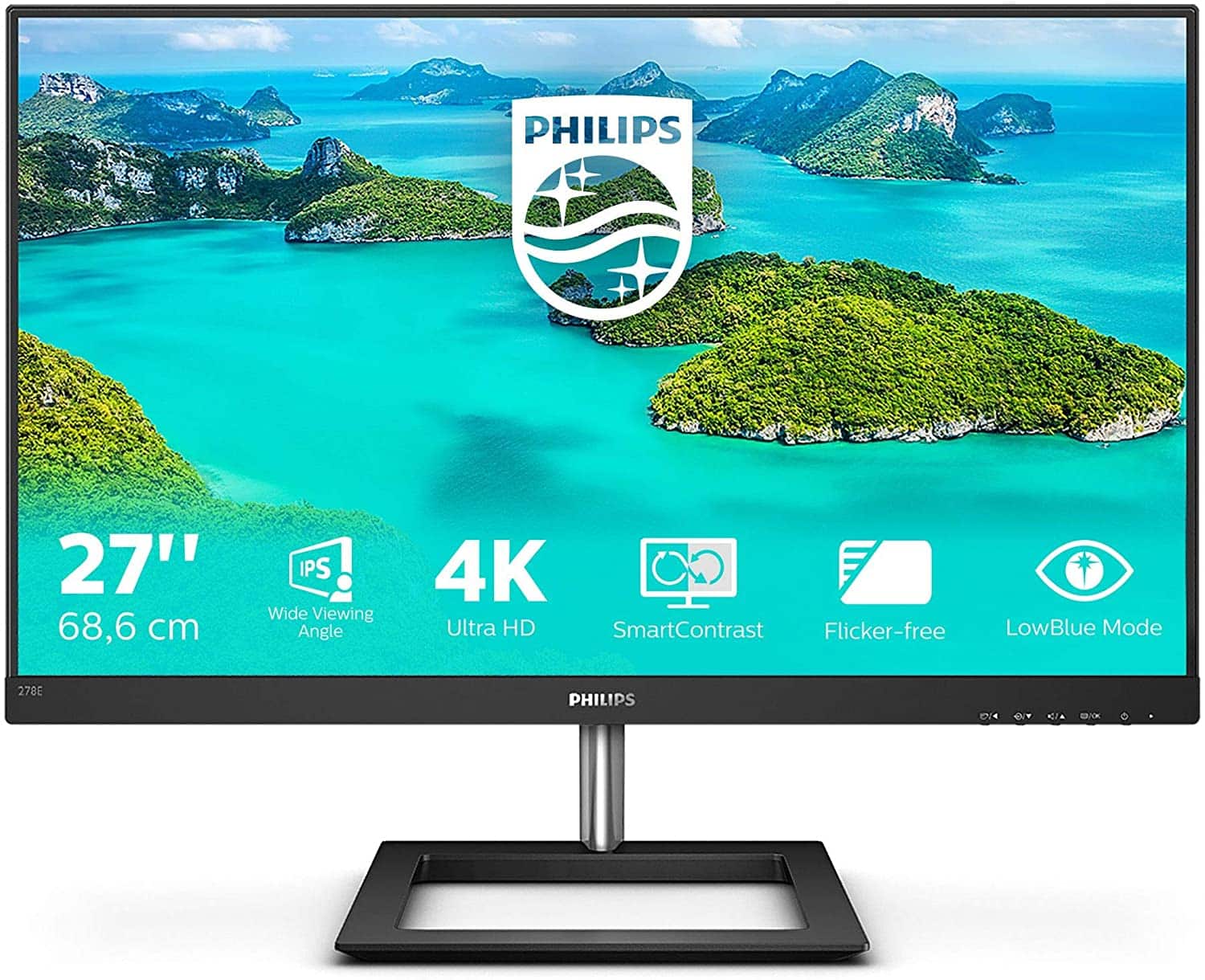 The Philips 278E1A offers a 4K IPS screen that’s affordable and great for daily use for work from home or even entertainment. The brand’s E-line monitors have surprised before, breaking down respective categories and price ceilings. The Philips 278E1A is still a budget monitor so we can’t expect much, but let’s see how it performs against similar and higher-tiered competitors. 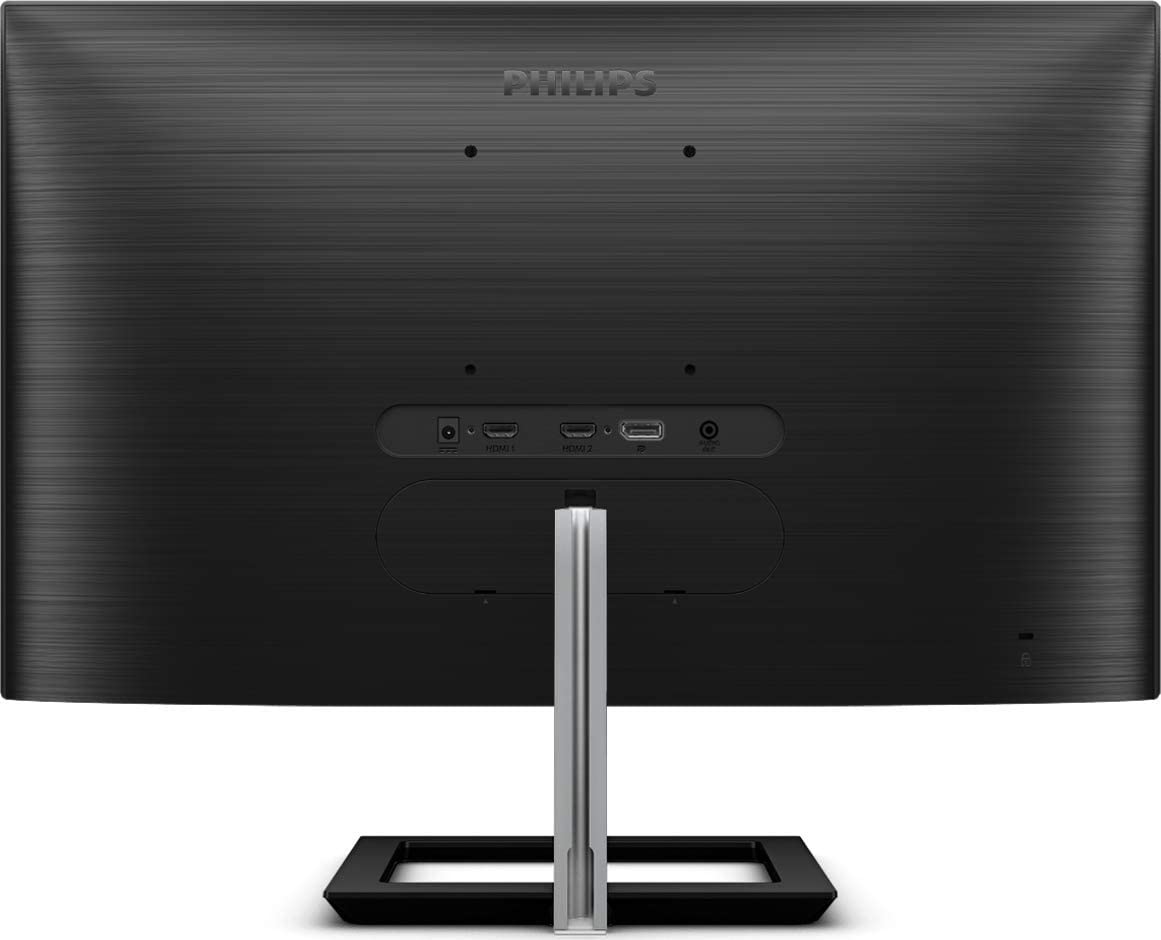 The Philips 278E1A is an economy-class monitor so its aesthetics are mostly toned down like other office displays. The device has a matte black with a metallic stand for that clean and sophisticated look. The display is bezel-free on three sides, giving the user the impression that it’s bigger than it actually is.

It’s also slim and lightweight, so you won’t have much trouble trying to move the Philips 278E1A around if you reconfigure your setup often. It isn’t a desk hog as well, thanks to the hollow base and the 7.56-inch total depth. The monitor should fit in without displacing your other peripherals, so it’s perfect for workstations. 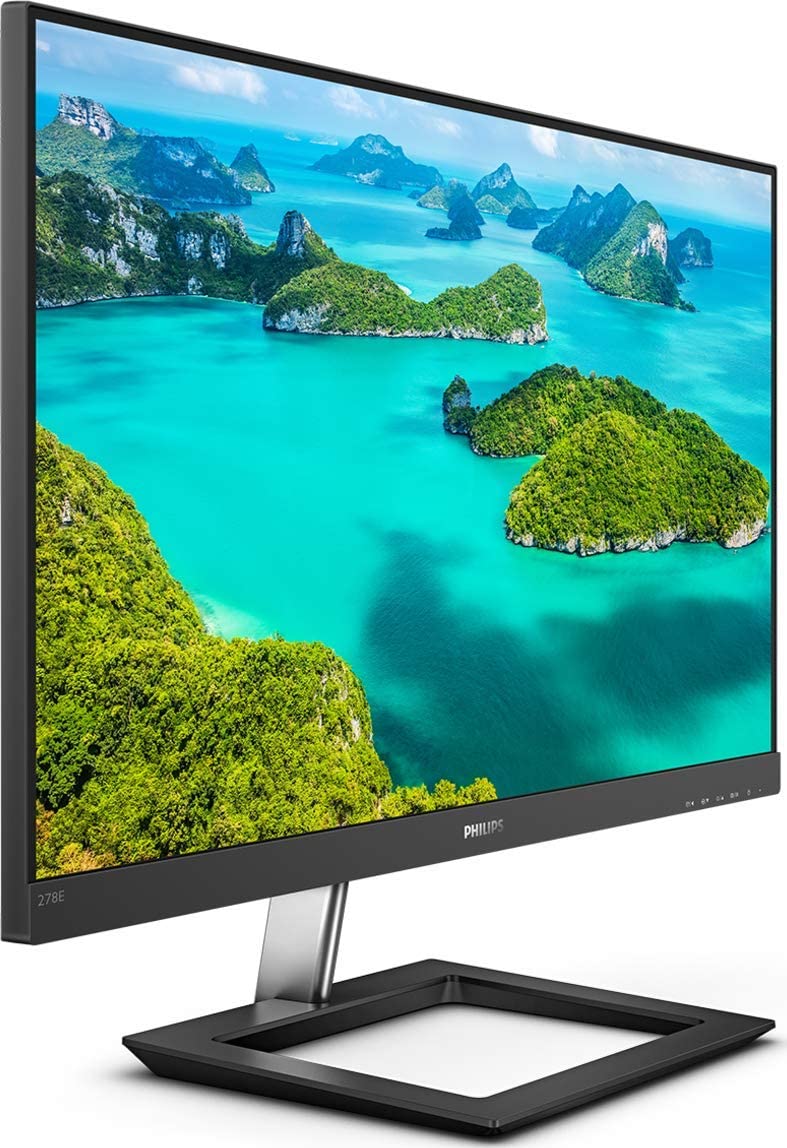 The Philips 278E1A’s build quality is great for a budget monitor since it looks perfect all over with no visible defects. The monitor is mostly made out of plastic, but it feels durable and we didn’t feel any flexing. The stand has a slight wobble, but that’s common with tilt-limited monitors that have a low-sitting attachment point.

One letdown with the Philips 278E1A is it still uses OSD buttons unlike many other new models in the market. The OSD is well-laid out and there are labels, but it still takes more time to accomplish a tweak with this layout. You also don’t see the buttons directly, so erroneous presses will still be common, especially at night.

The stand included with the Philips 278E1A only offers tilt so the monitor feels restricted when trying to adjust for a more comfortable angle. You can swap this part out with a VESA mount, but that adds cost that might defeat the notion of saving money on a budget model. We like that the base is hollow since it can act as a holding area for small things like USB drives or even a stream deck.

We also like that the Philips 278E1A includes two HDMI 2.0 ports along with a DisplayPort 1.2 slot for your host devices. It doesn’t have extras other than the analog jack, but it can accommodate up to two consoles or a laptop alongside your PC. USB-C would have been fantastic, but we know that it will raise the price drastically if it’s included.

The Philips 278E1A even includes a pair of 3-watt speakers that are useful for some instances. Most users would rather use headsets or desktop speakers, but built-ins come in handy for work-related use. Work from home setups and conference calls are now more common, so there is some merit to their inclusion even if they don’t sound good enough for entertainment.

The Philips 278E1A offers a 27-inch IPS panel with a 3840 x 2160 resolution, a 60Hz refresh rate, and a 4ms response time. The backlight has a 350 cd/m2 maximum, while the contrast ratio is listed at 1000:1 like most IPS panels. This model doesn’t advertise HDR properties because it’s optimized for more general types of use.

4K screens in 27-inch models are extra crisp so they are great for images, videos, and games. However, the extra pixels and their density can sometimes make reading a bit harder for some users, especially those who read a lot. There are tools that can help such as scaling, so it’s not as worse as it sounds during regular use.

The Philips 278E1A exceeds 100% sRGB and produces around 76% DCI-P3, making it vibrant enough for its intended use. Default accuracy could be better since the color dE had a 3.12 average which isn’t the worse, but a clear sign that it isn’t calibrated. You can’t expect photo editing-grade fidelity out of a budget monitor, but there are some out there that fare better.

Calibrating the Philips 278E1A reduced its dE average to 1.13 which is considerably better than the stock settings. However, getting a colorimeter is impractical for a budget monitor since they are quite expensive. Most users will be able to get away with tweaks anyway, plus there is an sRGB mode that drops the dE average to 2.31 which is better.

The Philips 278E1A can get bright since it reached 398 cd/m2 at 100%, while its contrast topped out at 1053:1 at 50% brightness. It can fight off glare, but it still looks grayish or washed out in dark or all-black scenes. It’s an inherent weakness of IPS technology, and so far, only VA panels and those with FALD backlights have solved the black luminance limitations.

Panel uniformity for the Philips 278E1A is great since there are no major backlight leaks or deviances on the screen. Some clouding became visible on the top and bottom edges when an all-black image is displayed, but it wasn’t strong enough to become a nuisance. Take note that this aspect can vary between monitors due to the nature of panel technology and some manufacturing tolerances.

The Philips 278E1A is capable of decent motion handling for games, but it’s not blur-free in fast or contrasting transitions. The monitor has an overdrive feature, but we recommend using it sparingly since the higher levels will induce overshoot. Again, this is acceptable since the monitor was meant as a middle ground and a daily driver instead of a dedicated gaming display.

The Philips 278E1A is compatible with FreeSync, but it doesn’t work with Nvidia’s G-Sync Compatible mode. That’s a deal-breaker for many since there are a lot who own Nvidia GPUs, which have dominated the market for some time. Input lag is at 10ms at 60Hz, so delays won’t be an issue in games or in regular use.

Thoughts on the Philips 278E1A

The Philips 278E1A is a decent choice if you want an affordable 4K monitor for daily tasks, including casual gaming. The crisp 4K screen offers great colors, although it could use some tweaking to balance out the harshness of some colors. It has limited physical features, but its connectivity layout and build quality are superb at its price point.

However, there are some downsides you might want to consider first before buying an economy monitor like the Philips 278E1A. the aforementioned creature comforts like an ergonomic stand will be valuable for extended hours of use. It’s a great budget 4K monitor, but you have to live with some aspects unless you spend more cash for it.