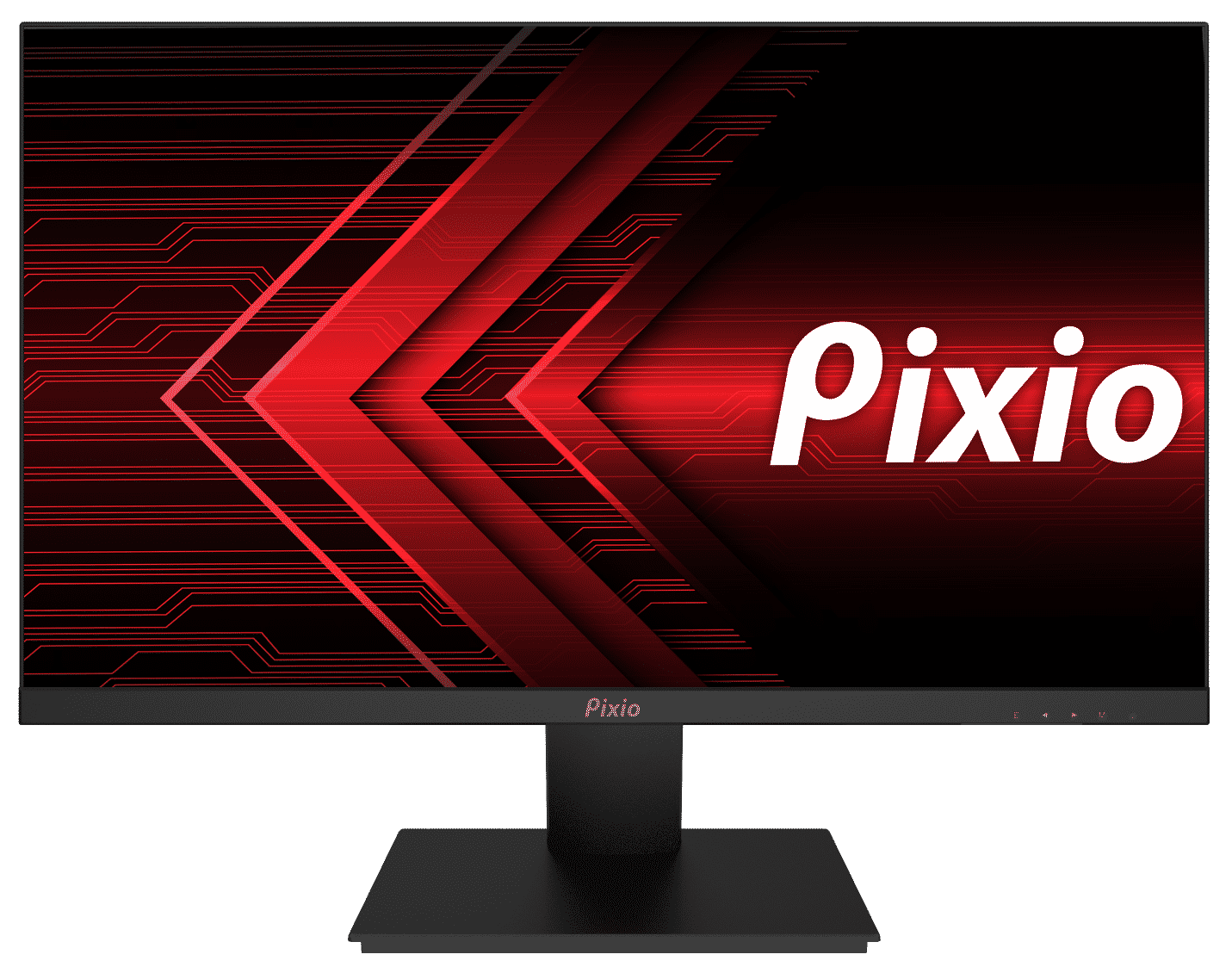 The Pixio PX259 Prime is one of the cheapest monitors that have plenty of speed and agility for competitive gaming. it packs a 240Hz IPS panel that’s overclockable to 280Hz, but it’s basically a barebones model on the other end. Let’s check out if the Pixio PX259 Prime is worthy of consideration for gamers who want professional gamer-level performance without spending extra. 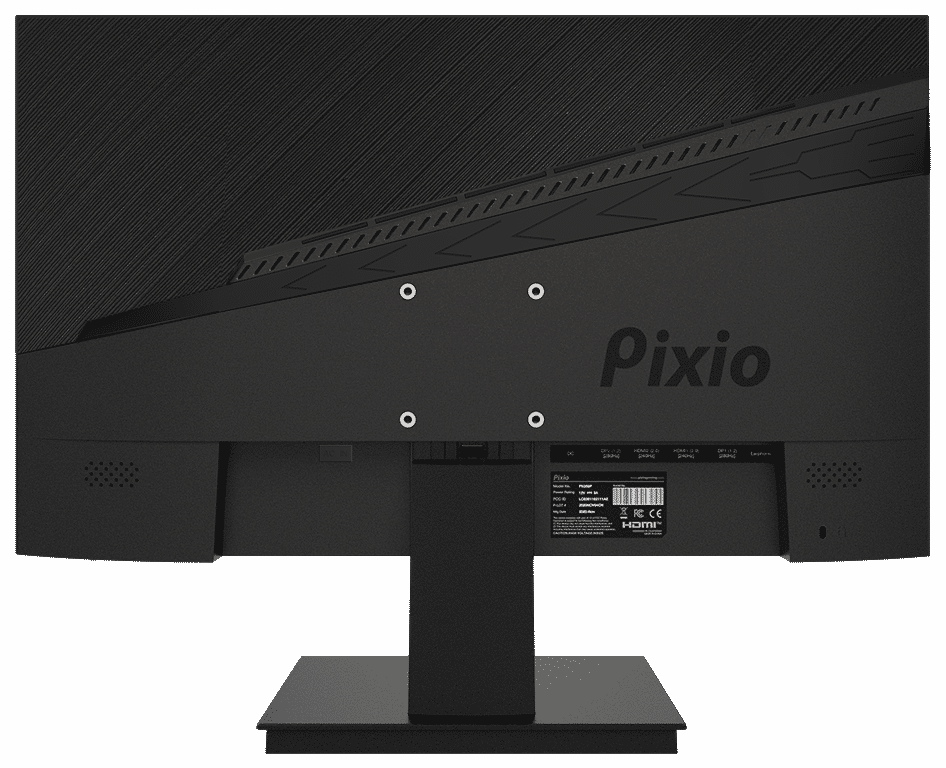 The Pixio PX259 Prime looks plain just like most office monitors, but that’s understandable since it is a budget model. The device has a matte black chassis that will not stick out and help the screen pop out even more. It’s bezel-free on three sides, but you will still have inner borders which in our opinion are mostly unnoticeable in the heat of battle.

What’s great about budget monitors with limited stands is that their dimensions are more compact than higher-tiered models. The Pixio PX259 Prime-only needs seven inches of depth, so it won’t push off your other peripherals. It’s also lightweight so it will be easy to move around if you rearrange often or if you attend LAN parties.

Build quality is decent, but you’d know that the Pixio PX259 Prime has had a share of some cost-cutting. The plastics are reasonably durable, so the chassis won’t flex or crack unless you squeeze it hard enough. The stand wobbles when you touch the cabinet, but it is not as much of an issue while gaming.

Another downgrade to help the Pixio PX259 Prime achieve its low price is its use of OSD buttons instead of a more convenient joystick. There are four buttons at the bottom of the screen, and it would take some getting used to for smooth operation. This is okay since the monitor is quite cheap, but there are other options out there that are just as affordable even if they have joysticks.

The stand included with the Pixio PX259 Prime can only offer tilt, limiting the many ways the monitor can be used. The monitor sits quite low, contributing to the wobbling we mentioned earlier. You can use VESA mounts, but the added cost will make this model more expensive than the Asus VG259QM. 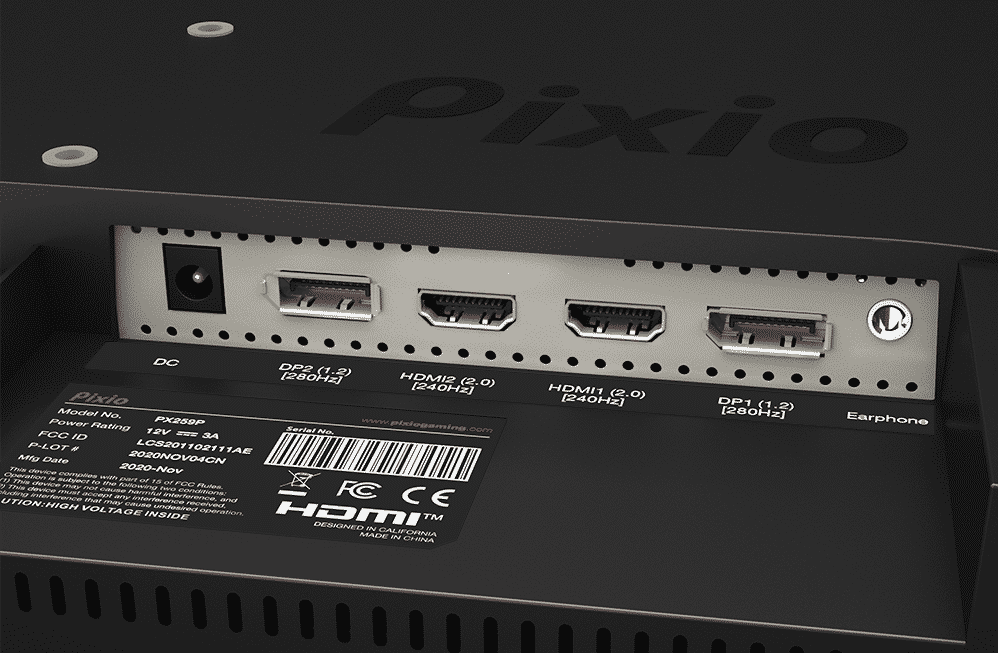 It also has plenty of connectivity options for daily operation, including using it for gaming consoles. You will find a DisplayPort 1.2 slot and two HDMI 2.0 ports that can handle those functions smoothly. there are no USB ports, but that’s okay since omitting those helped lower the price.

The Pixio PX259 Prime still includes a pair of built-in speakers which you can use for secondary purposes. Its 3-watt output won’t be enough for games, but it can be used for background music or even conference calls if you work from home. This matters less since gamers prefer headsets anyway, but it is also nice to have extras.

The Pixio PX259 Prime sports a 25-inch Fast IPS panel with a 1920 x 1080 resolution, a 280Hz overclocked refresh rate, and a 1ms response time. The backlight has a 350 cd/m2 maximum while the contrast ratio is listed at 1000:1 like most IPS panels. This monitor is HDR compatible, but it is not equipped to produce substantial improvements like the premium models out there.

1080p monitors are very easy to use for many since we’ve used them in one way or another, such as in school or at work. It’s very easy on the eyes for daily tasks such as reading and browsing when compared to higher resolution models. it’s also quite possible to reach the maximum refresh rates with more GPUs, so you don’t necessarily have to buy flagship variants for it.

The Pixio PX259 Prime renders a little over 100% sRGB and around 76% DCI-P3 which is great for competitive gaming. However, the default accuracy’s delta average of 3.76 is too high, indicating that the monitor wasn’t calibrated at the factory. Its sufficiently vibrant, but trained eyes will notice some color errors in some instances.

Calibrating the Pixio PX259 Prime improved its dE average to 2.39 which is much more balanced. However, it is not a massive improvement, so getting a colorimeter for this purpose isn’t worth it. Results could vary between every monitor, but this is a good indication that the monitor was designed solely for gaming.

The backlight only reached 322 cd/m2 at 100%, but that’s bright enough even if you use the monitor in well-lit rooms. What we disliked about it is its contrast ratio which only managed to get to 867:1 at 50% brightness. It’s unable to produce deep blacks like most IPS monitors, but this is one of the lowest results we’ve seen in recent times.

Panel uniformity for the Pixio PX259 Prime sample could be better since there were light leaks at the top edges of the screen. This resulted in clouding issues in dark scenes, although it’s less of an issue in full-colored images. Thankfully, this can vary between every unit due to tolerances, so there are better ones out there.

But what’s great about the Pixio PX259 Prime is its pixel response time which doesn’t allow for blurring issues to happen. You don’t have to use too much overdrive on it, especially if you are running at 240Hz or 280Hz. It’s as fast as the Asus VG259QM in this regard, but that model is better equipped for a few more bucks.

The Pixio PX259 Prime is a FreeSync Premium gaming monitor, but it also works with Nvidia’s G-Sync compatible mode. Both brands have capable GPUs for this type of monitor, so it is important to have the freedom to choose between the two when the chance to upgrade arrives. Input lag sits at 3ms at 280Hz, so there is no need to worry about delays while gaming.

Thoughts on the Pixio PX259 Prime

The Pixio PX259 Prime is an excellent budget pick if you are after gaming performance more than anything else. It is fast and responsive, plus it has all the essentials for an enjoyable competitive gaming experience. Pixio has been improving with their releases, and they are becoming increasingly competitive in a full market.

However, there are some deal-breakers with the Pixio PX259 Prime such as its stand or its very low contrast. It is affordable at its $299 SRP, but the Asus VG259QM we mentioned earlier regularly drops to that price point. It’s not a bad deal, but there are better picks with more to offer if you look close enough.