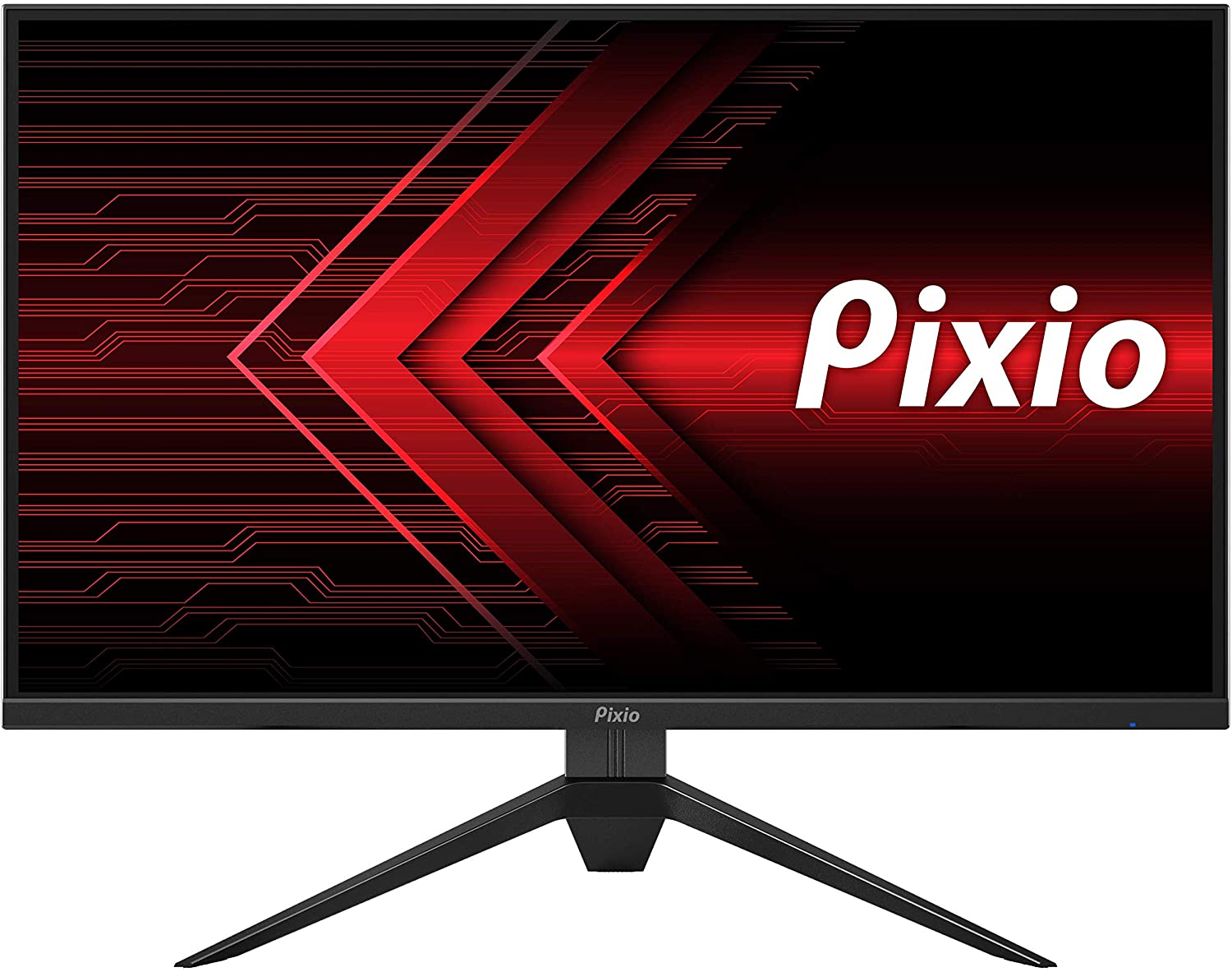 The Pixio PX279 Prime is a budget-oriented 240Hz monitor that aims to give you a fast and responsive experience that’s ideal for competitive gaming. Pricing has already come down for the 240Hz category, but Pixio has been doing really good at breaking down price barriers even further. The more affordable Pixio PX279 Prime is around $50 to $70 cheaper than its premium competition, but let’s check and see how it performs first. 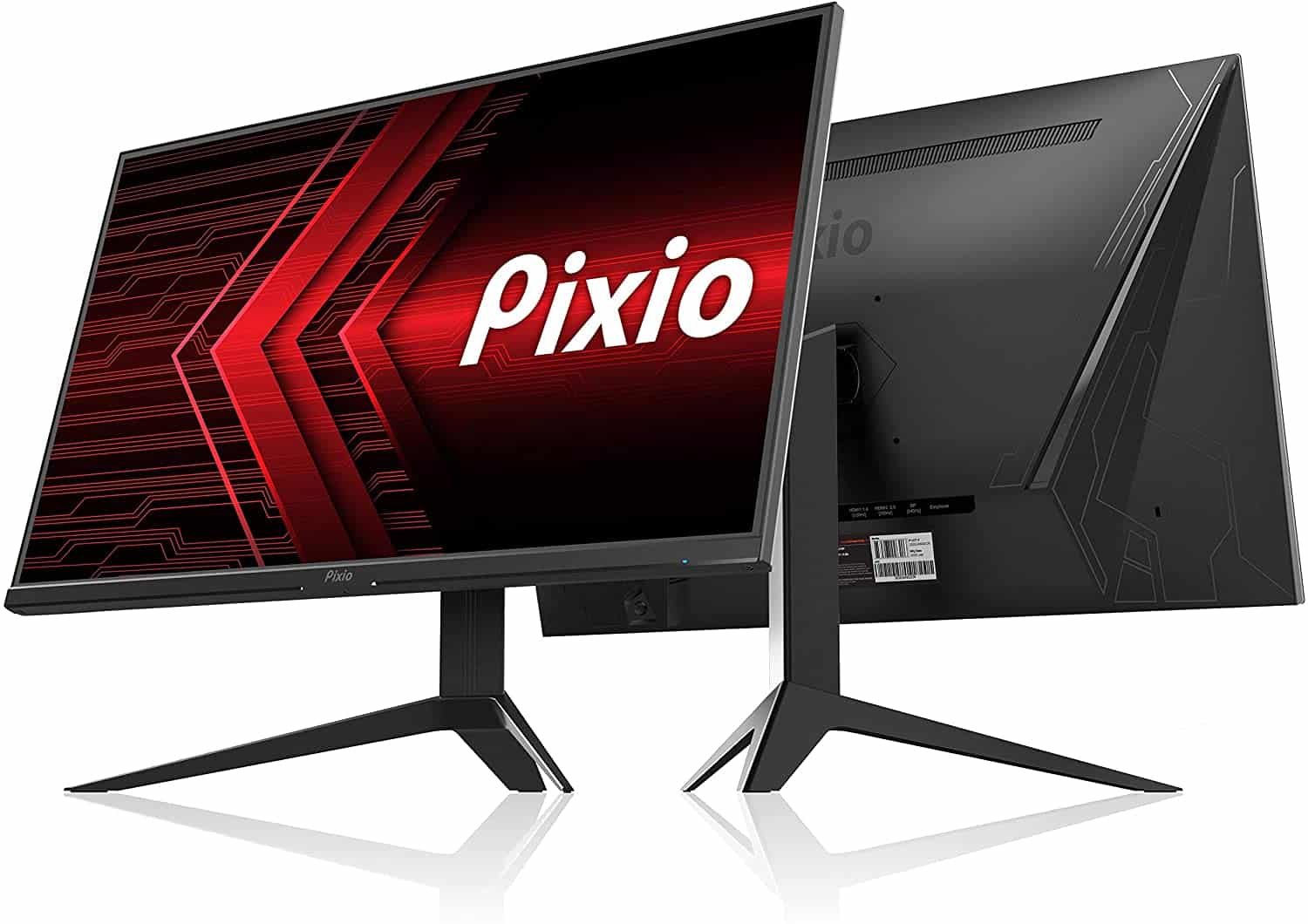 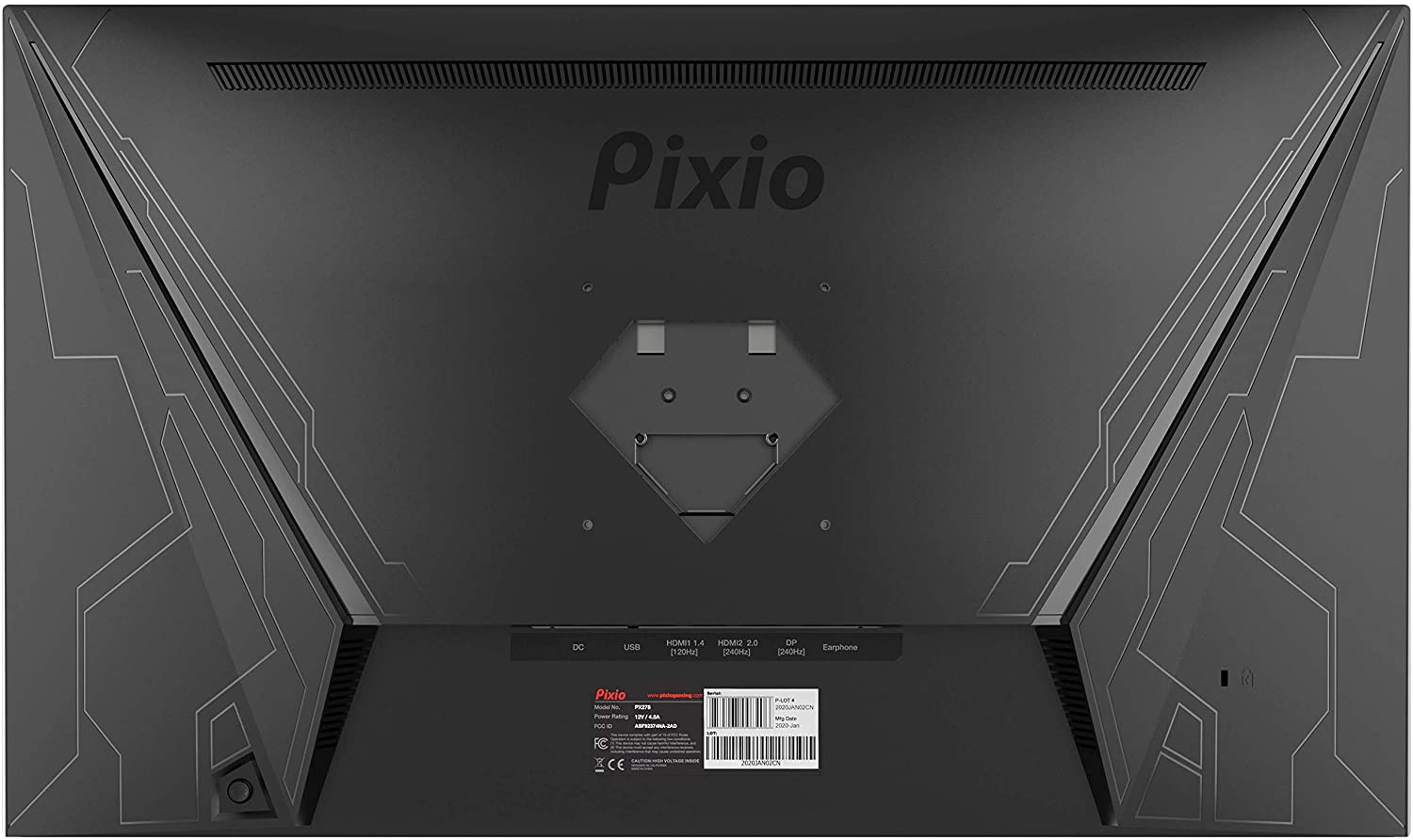 The Pixio PX279 Prime belongs to the brand’s upper bracket with the “Prime” moniker, but its aesthetics looks closer to the older PX278 instead of the PX7 Prime. However, it’s still a massive improvement over the first-gen PX277 which looked like an old TV with a very flimsy stand. The monitor has a clean matte black aesthetic with a three-side frameless design that is comparable to the aesthetics of its current competitors in the market.

The Pixio PX279 Prime is bigger than your typical office monitor and it needs around ten inches of depth when fully assembled. It’s not the largest monitor we’ve handled, but it’s quite tall and its base does need a bit of space even if it’s only the tips of the prongs that make contact on your desk. It’s also not that heavy for a 27-inch variant so it’s fairly easy to move around or bring with you when the need arises.

Build quality for the Pixio PX279 Prime is also improved compared to older models since the plastics used feel more robust and reinforced. We didn’t see any cosmetic defects and the edges of the monitor, including its aesthetic patterns, are crisp and clean. The stand has some wobble especially when you touch it or try to adjust its settings, but that doesn’t happen when while you are gaming.

The Pixio PX279 Prime also has an OSD joystick at the back that is located in an easy to reach spot and convenient to use. Buttons require a lot of presses to get to a specific sub-menu, so they take more time and are more prone to wrong inputs. It is always nice to have the former on any class of monitor, and we’re glad that Pixio added it to its design consideration despite the limitations set by the low price.

The stand included with the Pixio PX279 Prime only offers tilt adjustments so it may be considered a deal-breaker for some meticulous users. However, it is forgivable for us considering how cheap this monitor is compared to its competitors. You can also swap it out with a VESA mount, but that’s only necessary for multi-monitor setups or if space is an issue. 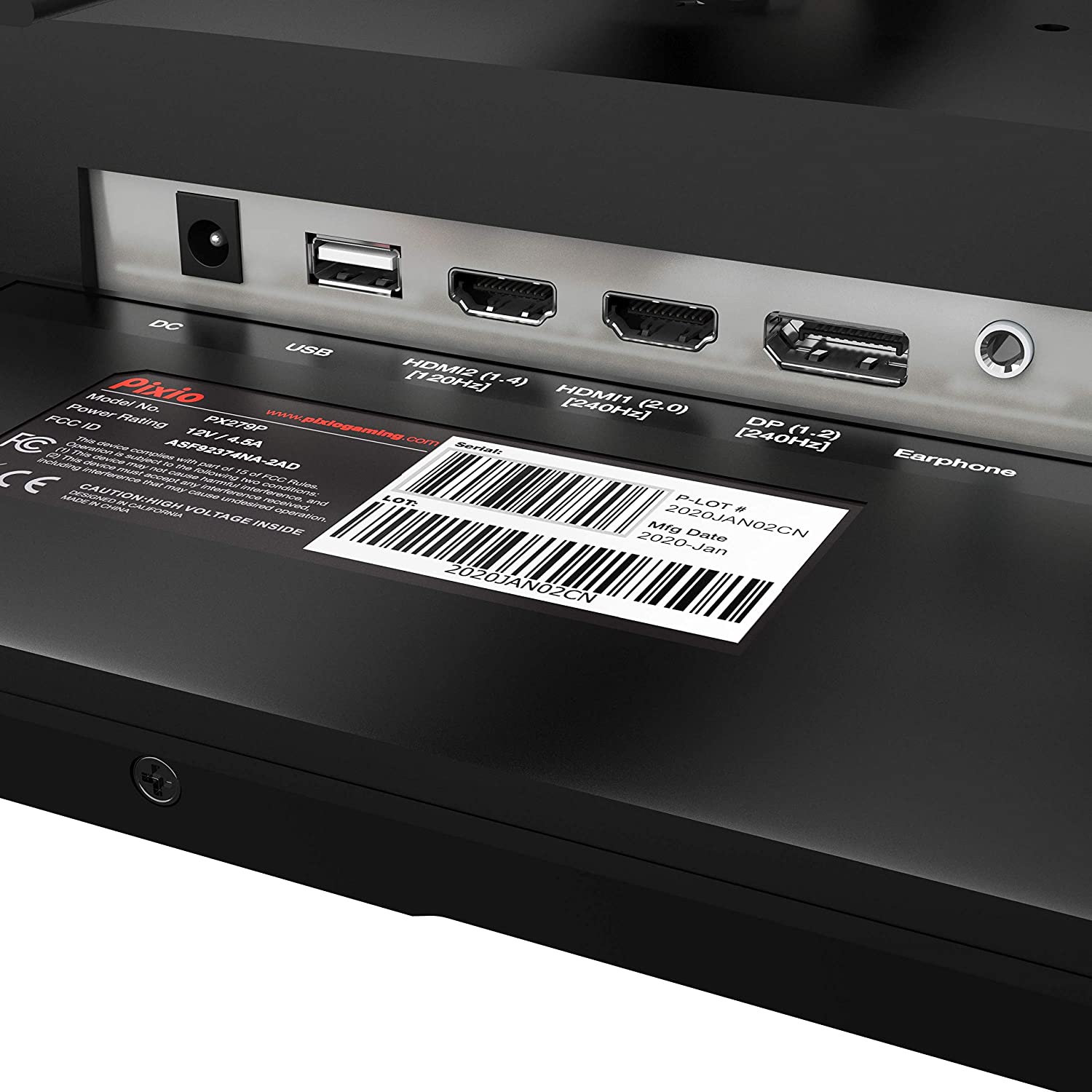 The connectivity layout on the Pixio PX279 Prime is pretty basic as well, but it includes DisplayPort 1.2 and a slot each for HDMI 1.4 and 2.0. The lone USB slot is a service port, so its only meant to be used for updating the firmware. You will also find a 3.5mm jack for headphones, but we know most users prefer the motherboard’s audio out for less distortion and noise.

The Pixio PX279 Prime doesn’t have speakers, but then again, that’s fair since it is a very affordable model. Built-ins can become handy in some instances, but gamers will almost always use headsets or external speakers since they sound better.

The Pixio PX279 Prime boasts a 27-inch IPS panel with a 1920 x 1080 resolution, a 240Hz refresh rate, and a 1ms boosted response time. The backlight is rated at 400 cd/m2 while the contrast ratio is still limited to 1000:1 like most IPS panels. This model doesn’t advertise any level of VESA HDR certification, but HDR10 compatibility was mentioned in its spec sheet.

Full HD at 27 inches isn’t the sharpest, and many would be quick to dismiss it as pixelated or fuzzy-looking in games. However, we think that it is still pleasant to look at unless your viewing distance is less than two feet. Visibility is excellent as well so you won’t need scaling, plus it’s rather easy to get very high frame rates at this resolution with almost any kind of GPU available.

The Pixio PX279 Prime is capable of 110% sRGB and around 74% DC-P3 which is decent for a competitive gaming monitor in the budget range. However, there seems to be no form of any calibration at all since the DeltaE average reached as much as 5.23 which means color errors are quite noticeable. Colors are punchy and rich, but you will see that some bright shades are off compared to other monitors.

But with a bit of love, the Pixio PX279 Prime becomes a decent performer with a much better dE average of 3.48. it still isn’t perfect or suitable for color-critical work, but manual adjustments can make it look more balanced and natural. Using a colorimeter isn’t worth it since the improvements were minimal and unnoticeable.

The Pixio PX279 Prime’s backlight missed its advertised ceiling since it only managed 390 cd/m2 at 100% brightness. However, that’s plenty for daily use and you will find yourself lowering it down, especially after an hour or more of usage. The screen’s contrast managed to reach 1150:1 at 50% illumination, but the screen still cannot provide true blacks especially when it’s viewed in the dark.

We didn’t notice any massive deviations on the Pixio PX279 Prime’s panel, but there are some hotspots or clouding near the bottom of the screen. It is only visible if you put on an all-black image so it won’t be an issue while games are on display. Take note that this varies between every unit due to the nature of IPS panels and some manufacturing tolerances.

Pixel response time on the Pixio PX279 Prime is fantastic since any level of motion blur or persistence is already next to invisible. Most users won’t need to use overdrive with it, but we don’t recommend the max setting which adds overshoot if in case you feel the need for it in fast-paced games. There are only a few select monitors that are better in this regard, and some of them are already 360Hz models that cost twice as much.

The Pixio PX279 Prime is a FreeSync Premium gaming monitor, but it also works with Nvidia’s G-Sync Compatibility mode flawlessly. It is always great to have a monitor with both features since you won’t be constrained to one GPU brand when the time to upgrade arrives. Input lag sits at a little under 4ms at 240Hz, so there is no need to worry about delays or de-synced instances while playing your favorite titles.

Thoughts on the Pixio PX279 Prime

The Pixio PX279 Prime is far from perfect, but it’s a great choice if you want a high-speed gaming monitor at a very reasonable price. The screen is decent when it comes to image quality, but responsiveness and speed are fantastic. We also like the Pixio upgraded its monitor’s physical qualities which were one of the things you had to sacrifice back then if you chose to save cash and buy budget models.

However, it does have its flaws as mentioned, starting with the poor color accuracy out of the box. Calibrating the monitor provided limited improvements, but that can also vary between every unit. Overall, it’s an excellent buy, but there are some limitations which you may have to live with unless you spend more.