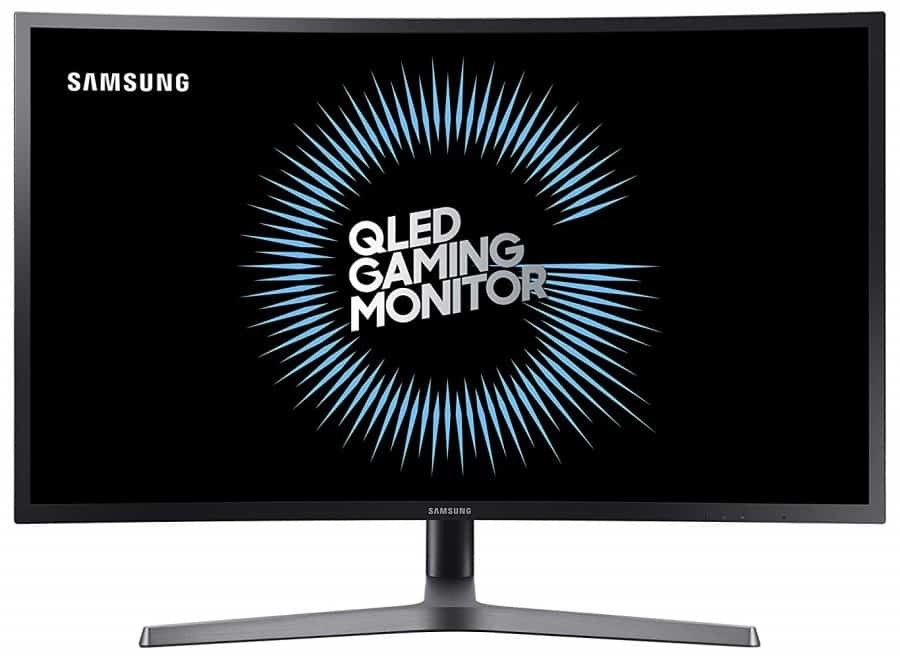 The Samsung C27HG70 remains to be an attractive option for gamers who want high refresh rates and HDR compatibility for maximum eye candy. The 1800r display includes high-end specifications such as a Nanosys Quantum Dot backlight solution and a 1ms MPRT function. The Samsung C27HG70 is facing a lot of competition in today’s market, so is it still worth buying in 2019? 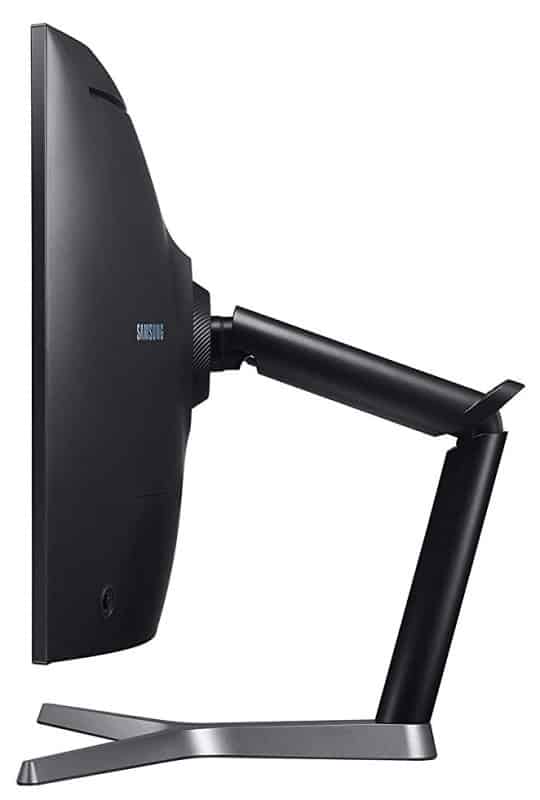 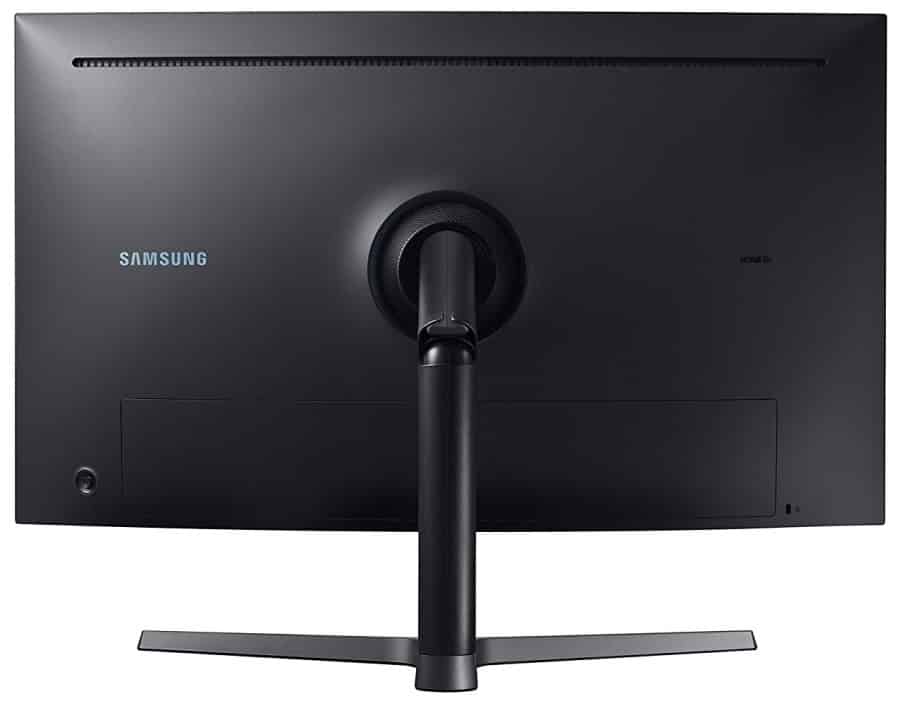 The Samsung C27HG70’s familiar aesthetic composed of clean panels and minimal decorative extras is well-received, even for their gaming products. The chassis uses matte black plastics all over, giving the monitor an industrial look which conceals its gaming pedigree. This variant is understandable, not bezel-free due to the thicker panel borders of VA cells which are difficult to conceal. 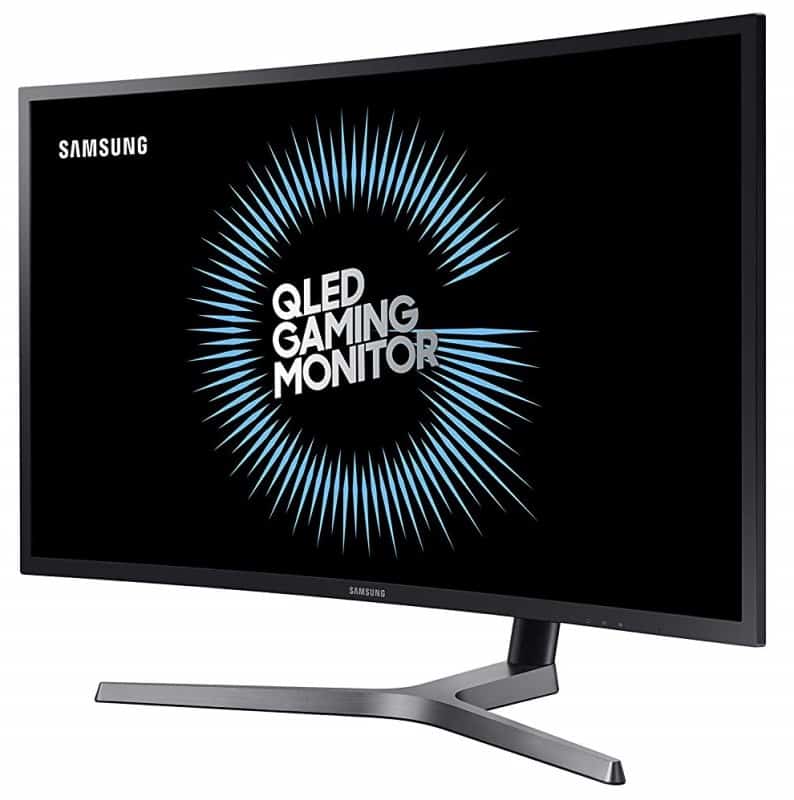 One of the things we love about the Samsung C27HG70 is its purely minimalist appearance. The rear has a smoothened out appearance with the exception of the circular node at the center which has an LED ring called Arena Lighting. The add-on isn’t bright enough for bias lighting purposes, but the gentle glow it adds is a nice decorative touch.

Another prominent feature at the rear of the Samsung C27HG70 is its lone OSD joystick. The tool is a must-have in our books since it makes operation and controlling the display according to your needs easy and convenient. Its handily located at the bottom corner so you won’t have to reach over every time you need to change something.

Build quality is very solid for this iteration since we did not notice any wobbling or warping on the plastics. Another aspect of the monitor is the Y-shaped base which takes up a lot of space but also keeps the device standing firm on a desk. We also did not notice any physical manufacturing defects on its parts, sealing the device’s premium-grade appeal.

The Samsung C27HG70’s stand offers tilt, swivel, and height to make it easy for users to find the perfect fit. The unique, bendable upright adds a level of depth to the device, so placement against a wall is critical. You can opt for VESA mounting with a 100 x 100 bolt pattern if in-case the stock configuration doesn’t work for you.

The Samsung C27HG70’s concealed I/O panel has a removable plastic cover for a clean overall look. The layout includes DisplayPort 1.4, dual HDMI 2.0, and three USB 3.0 ports. There are 3.5mm jacks for audio input and output, but there are no speakers built into the chassis.

The Samsung C27HG70 sports a 27-inch VA panel with a 2560 x 1440 resolution, 144hz refresh rate, and a 4ms response time with a 1ms MPRT option. A 3000:1 contrast ratio is also specified with a 350 cd/m2 backlight which pulses up to 600 cd/m2 for HDR content. The display is also rated with wide gamut coverage, making this model qualified for VESA’s DisplayHDR certification.

27-inch monitors are perfect for the QHD resolution since it offers the perfect balance between size and pixel pitch. The increased PPI adds details, while the expanded screen space accommodates them perfectly without softening or stretching the image. This configuration is now widely considered as the standard for enthusiast-grade gaming since 4K 144Hz is still too expensive.

The Samsung VA panel in the Samsung C27HG70 produces 100% sRGB with some extensions which also equates to 90% DCI-P3. This rating means that the monitor will pump out a fantastic level of vibrancy compared to IPS or TN variants, especially since its equipped with a Quantum Dot solution. The color accuracy is equally impressive with an average Delta E of only 1.5, making this variant suitable for editing as well.

Contrast is fairly excellent for the Samsung C27HG70, averaging at 2400:1 at almost every brightness range. The backlight tops out at 404 cd/m2, but using the monitor’s Local Dimming feature boosts the two to 3590:1 and 610 cd/m2 respectively. Take note that the latter is just an enhanced Dynamic Contrast setting which should not be confused with FALD solutions found on monitors like the PG27UQ.

These capabilities give the Samsung C27HG70 a better than most HDR quality which enhances game graphics on a noticeable scale. Enabling the Dynamic Contrast mode is actually beneficial since it enhances lighting and corrects the depth of objects in the image. HDR-compatible games like BFV are a joy to play on this monitor due to the addition of tiny details such as cast lighting with shadows on rocks and terrain.

You’d expect monitors with a mish-mash of capabilities in the lighting department to miss a superb uniformity score. The good news that the Samsung C27HG70 test unit did show an excellent evenness in illumination with no deviations exceeding 5%. Color remained fantastic as well since only the top corners showed an unnoticeable DeltaE 2.5 variance from the D65 standard.

The Samsung C27HG70 is still susceptible to blurring since it still is a VA monitor. The included overdrive modes can help alleviate this, but the best overall setting to pick is the Standard mode which doesn’t clean off all the trailing, but will also avoid overshoot as well. The monitor carries a 1ms MPRT feature which is another name for backlight strobing which is effective at this issue, but it will lock out important features and dim the screen.

The Samsung C27HG70 is a FreeSync 2 gaming monitor, but it also works with Nvidia’s G-Sync compatibility mode. Take note that you need to update the monitor’s firmware to the latest version to ensure that you can get the feature to work. Input lag is limited to 4ms, putting this model next to the best in the business such as the Asus PG278QR.

Thoughts on the Samsung C27HG70

The Samsung C27HG70 is an attractive gaming monitor to buy if you want a high-refresh screen with an effective HDR solution. The Quantum-Dot-equipped VA panel offers excellent colors and contrast, plus HDR-compatible games will offer more improvements and eye candy. It’s also fantastic that you can get this product with a considerable discount whereas the latest HDR-compatible displays still command a hefty premium.

Unfortunately, the Samsung C27HG70 isn’t perfect since its VA panel is still prone to blurring. The firm did include a 1ms MPRT feature, but it’s unusable for many who would prefer to have a brighter backlight and adaptive sync. But we think at its current price, this is a small price to pay for a unique and capable gaming display that can beat many new models in the market.