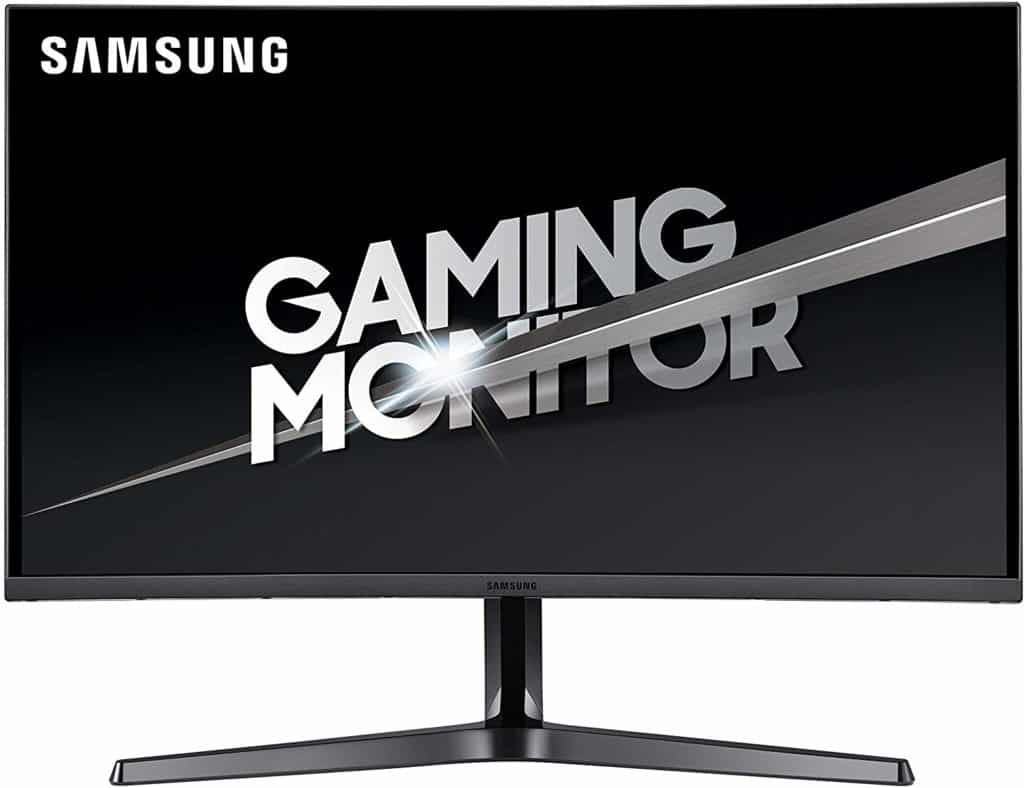 The Samsung C27JG50 is a reasonably-priced gaming monitor with attractive specifications like its curved screen with a 144Hz refresh rate. The monitor costs less than similar offerings even if it’s from a premium brand, but there are a few exclusions you might want to consider. Let’s check if the Samsung C27JG50 can extend its value with fantastic image quality and raw gaming performance. 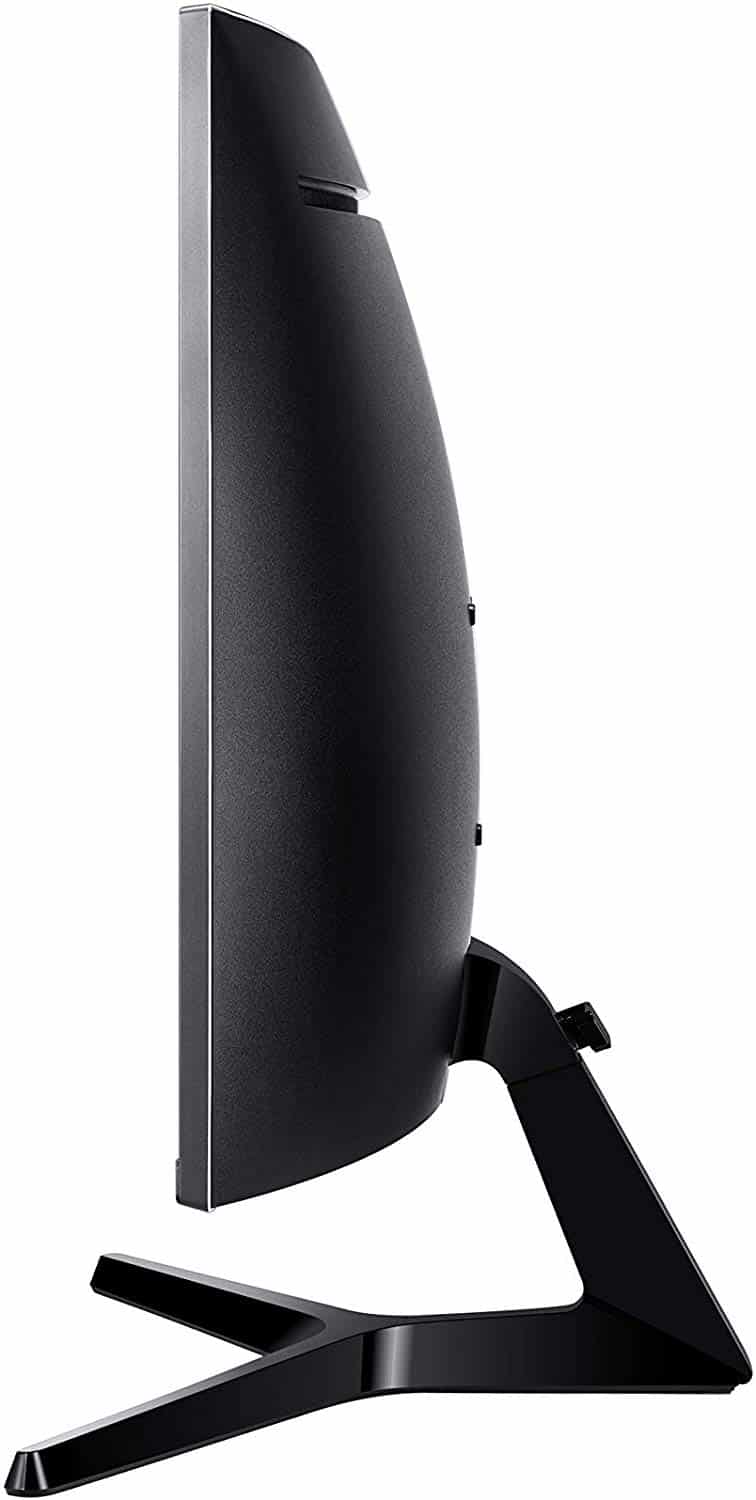 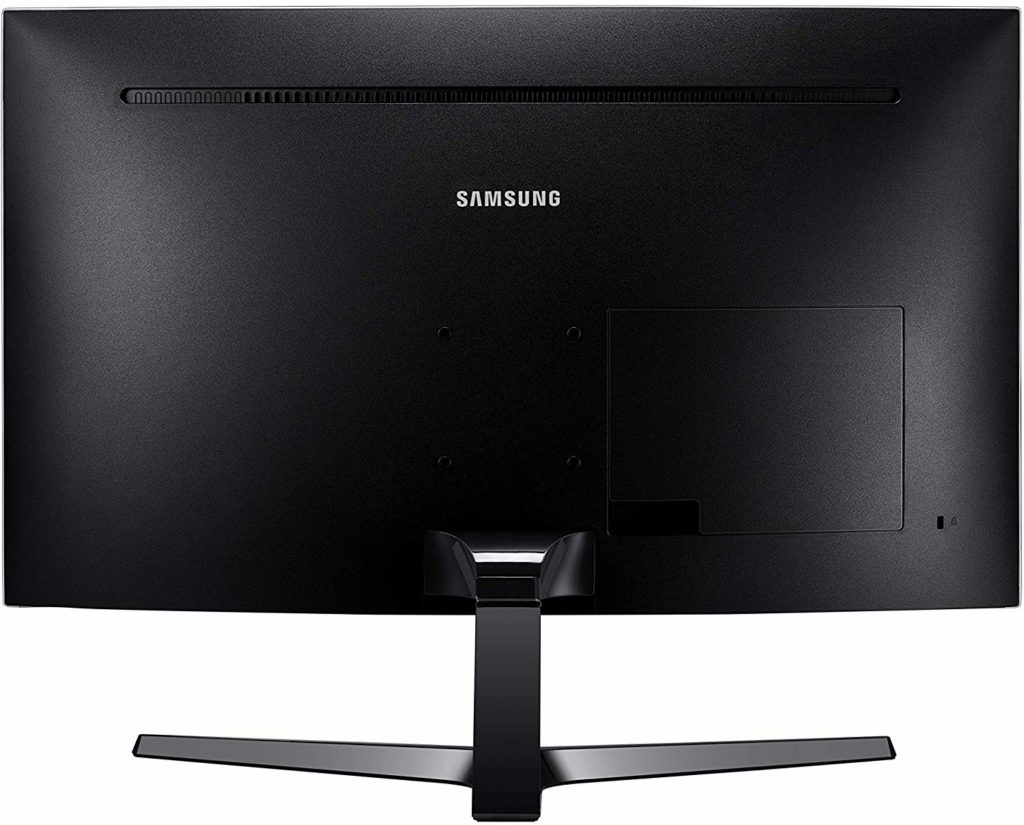 The Samsung C27JG50 carries gaming-grade specs, but its dressed like an office or studio monitor with slim proportions. The monitor’s combination of matte black and gunmetal makes it very attractive, however, we dislike the glossy plastic on the stand since it’s easy to scratch. The display area is bezel-free on three sides, but you will still reasonable panel borders when the monitor is in use.

Build quality for the Samsung C27JG50 is more than decent thanks to the brand’s spot-on manufacturing processes. The plastic panels do not feel thin or cheap, plus there are no cosmetic defects on the test unit. There is a slight wobble and the tilting mechanism is a bit tighter than usual but other than that, we did not find any considerable issues.

You also don’t have to deal with pesky buttons if you want to tweak your Samsung C27JG50 since it has a joystick installed right under the bottom bezel. We always prefer this implementation simply because its easier to use, especially while computing or gaming in the dark. Its transfer to the middle part is also easier to reach, unlike many of the brand’s models where its placed at the lower corner of the rear panel.

The shell used on the rear has a textured panel a dominant indent for vents that help to keep the monitor run cool. There is no prominent add ons such as RGB lighting on this model, so you will only see the Samsung logo and the four bolt holes for VESA mounting. This model takes 75 x 75 adapters, and you won’t have trouble finding a suitable armature since its lightweight.

The Samsung C27JG50’s base has an extensive reach, allowing the larger device to stand stable to avoid accidents. The product needs almost ten inches of depth once fully assembled, but the worst part is you only get tilting adjustments. We recommend using an aftermarket mount for this monitor, but that will offset the cost which could make more expensive variants within range. 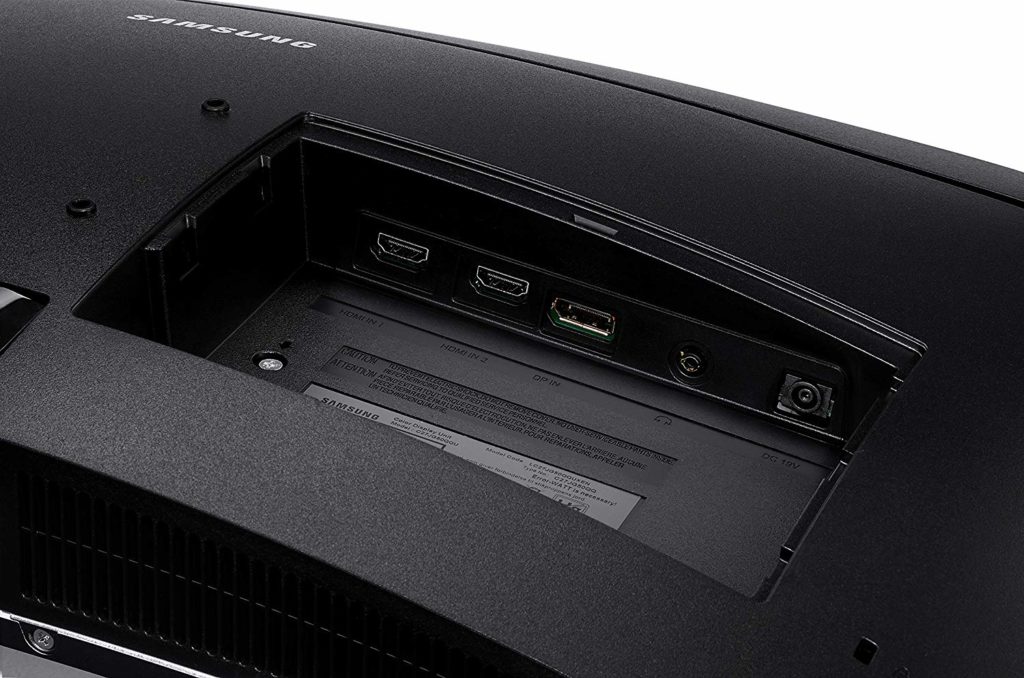 Connectivity options on the Samsung C27JG50 are just right, starting with a DisplayPort 1.2 as your main video input. There are two HDMI slots on the monitor, but only one has the 2.0 standard while the other uses 1.4. It’s great that the panel is concealed by a plastic cover for neatness, but we would have liked a USB slot or two for accessories or peripherals.

There is also no built-in speakers with the Samsung C27JG50 since its a budget model. Brands typically exclude less important features to help make a lower price point, and we don’t think many will miss built-ins which are largely unsuitable for gaming or entertainment.

The Samsung C27JG50 sports a 27-inch curved VA panel with a 2560 x 1440 resolution, 144Hz refresh rate, and a 4ms response time. The backlight is rated at 300 cd/m2, while contrast is estimated to reach a maximum of 3000:1 for most instances. This model doesn’t have the 1ms MPRT spec on other models, but the characteristics still make it a very capable gaming monitor.

QHD is perfect for 27-inch monitors since you get a noticeable upgrade in detail and clarity without making the screen too sharp. You won’t need to use scaling in this format, but games are noticeably cleaner-looking so they will not require Anti Aliasing and the like most of the time. The 1800r curve adds the feeling of immersion, but its more appreciable on larger screens.

The Samsung C27JG50 falls short of vibrant sRGB coverage since it can only render 94% of the spectrum. However, the accuracy score out of the box sits at Delta E 2.7, so you won’t need to calibrate the monitor to get a balanced look. You can calibrate this monitor to improve the score, but the screen looks warmer so we actually prefer its stock look.

The maximum contrast ratio reached by the Samsung C27JG50 goes as high as 3560:1, so blacks are very deep while color and grayscale separation are well-defined. The backlight is slightly brighter than specified at 315 cd/m2, giving users some room to adjust to what’s comfortable. Gamma, on the other hand, is slightly off at 2.16, but the variances it adds does not affect the overall appearance of the screen.

However, the Samsung C27JG50 sample did suffer from backlight bleeding on the top and bottom quadrants which resulted in skewing and clouding. You will see some washing out of the colors and contrast in dark scenes from titles like Control, but vibrant games like Apex Legends make them less noticeable. Take note that this varies between unit to unit, so make sure you get the product from a seller with friendly returns and exchange terms.

Blurring on the Samsung C27JG50 is minimal compared to other VA monitors, although some trailing still becomes noticeable if you pan the screen too quickly. The device’s overdrive function helps to clean the images further, but what’s best about it is it doesn’t induce any overshoot on every level. We recommend using the strongest setting if you see a bit of ghosting, but many users won’t even notice them while gaming.

What’s strange about the Samsung C27JG50 is it doesn’t support AMD’s FreeSync or Nvidia’s G-Sync, even if its a suitable gaming monitor. You have to rely on stable refresh rates to avoid tearing, so taking the time to optimize your game settings will be beneficial. Input lag sits at 5ms at 144Hz, so you don’t need to worry about delays or “de-synced” instances during competitive play.

Thoughts on the Samsung C27JG50

The Samsung C27JG50 offers excellent image quality and pixel responsiveness despite having a few handicaps in some aspects. The 1440p screen with a 144Hz refresh rate is great for gaming, while the curved shape adds a hint of immersion that doesn’t disappoint. Input lag is minimal, but there is no FreeSync or G-Sync to keep images from tearing or stuttering.

The biggest downsides of buying this monitor are its poor black uniformity and the limited features. The former will vary between unit to unit, but the lack of ergonomics and other creature comforts might make gamers look the other way. But if you are on a budget and your decision relies solely on good color quality and performance, then this model is worthy of consideration.