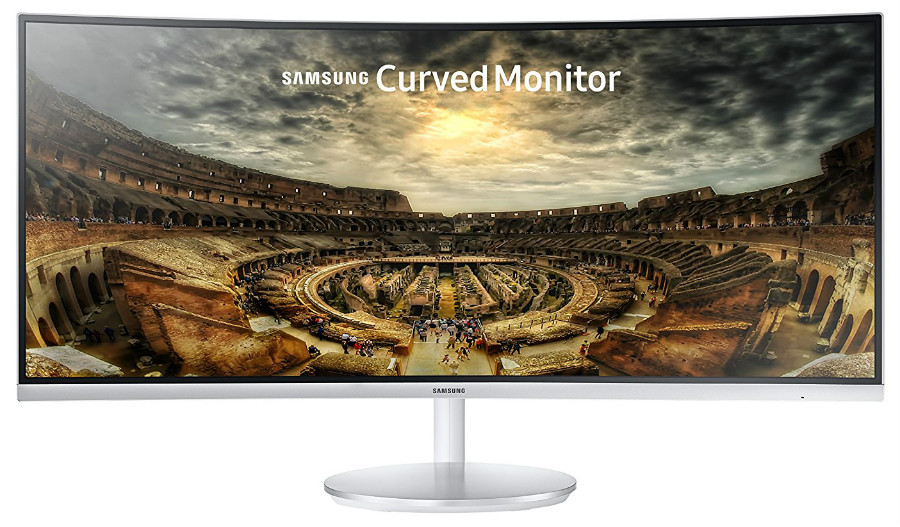 The Samsung C34F791 is a new ultra-wide curved gaming monitor with quantum dot technology. This product boasts of a UW-QHD resolution of 3440 x 1440, 100Hz refresh rate, and AMD’s Freesync for buttery smooth gaming. This type of display product is all too familiar for a lot of us, seeing and reviewing models like the Acer Predator X34 and Asus PG348Q, but the Korean company’s promised advantage lies in the use of its cutting edge Quantum Dot backlighting which has steadily gained ground in the market due to its benefits. The Samsung C34F791 has big shoes to fill and judging from our first look; it can do so admirably. 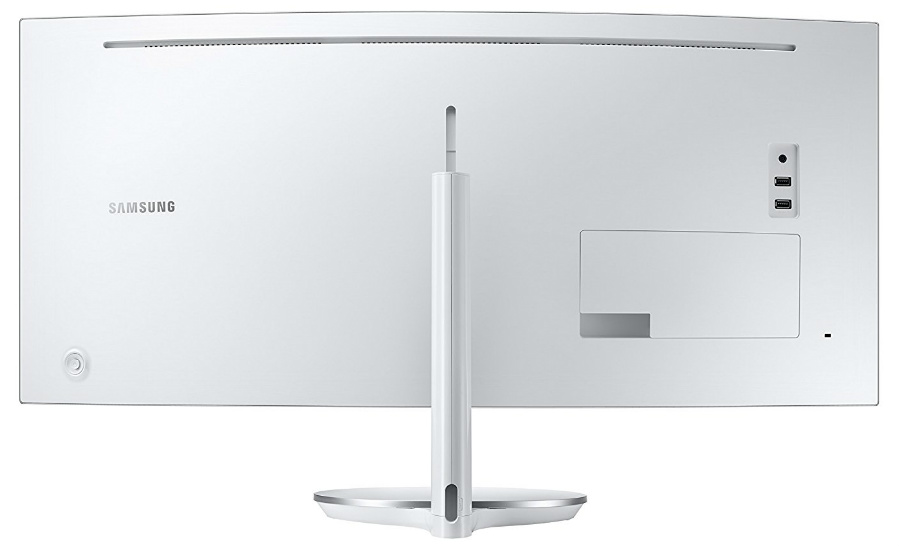 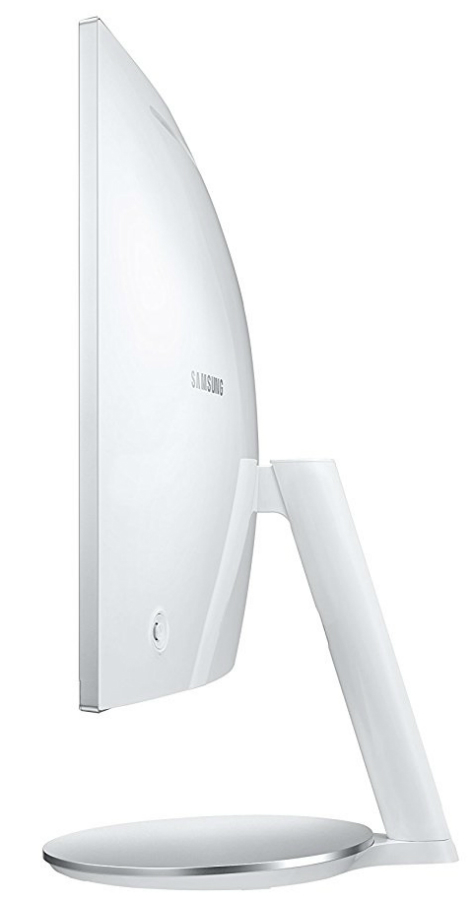 Samsung’s recent monitor offerings like the CFG70 provide designs which minimalists and contemporary home and office owners will love since the company veers away from the gaudy gamer designs of other manufacturers. Most of the exterior has a glossy white finish mixed with metallic hints on the edges and the base. The face of the C34F791 is mostly bezel-free, except for the bottom aluminium-colored strip and the inner black borders of the panel itself, making the product exude an effortless elegance. From the side view, the C34F791 looks reasonably thin from the edge aside from the slightly bulging curve which hides the interiors and I/O layout.

The stand for the Samsung C34F791 is as unique in its way since the whole monitor slides up or down and tilts from a single arm. Surprisingly, this armature is stable when compared to the more flexible unit on the CFG70. The screen may still wobble with some force, but the whole thing still holds the position you set without any issues. Adjusting the 34-inch display also feels smooth and comfortable, so you mostly won’t need two hands to raise or tilt according to your viewing tastes. The C34F791 uses a large, circular base finished in aluminum at the top, which some users may find cumbersome on cramped desks, but the sizing feels right against the massiveness of the product all while holding it in place. This part looks like it could hold additional features such as a Qi wireless charger for Samsung’s phones since the company is a well-known perpetrator of the said tech.

The Samsung C34F791 contains a plethora of connection ports which expands on multi-purpose usefulness, but we have seen other models with a wider I/O layout. There are two HDMI 2.0 ports, a lone DisplayPort, and three USB 3.0 ports with the type-B upstream slot. There is also a 3.5mm audio jack to go with a pair of built-in stereo speakers. Sound quality is decent for light applications, but soundstage and bass response is still lacking, a common weakness of built-in pairs. You’re better off with a decent pair of cans or a speaker set for games, movies, and music. The OSD is readily available via a JOG button, and navigation is smooth since the joystick is tactile for the most part, a little short of being precise. Finally, in case you don’t find the C34F791’s stand to be at par with your tastes, you can opt for aftermarket solutions since this product is mountable via an included adaptor.

The Samsung C34F791 boasts of a 34-inch VA panel with a 1500r curvature, Quantum Dot backlighting and a 3440 x 1440 native resolution. Samsung lists the C34F791’s color coverage at 125%, so upon powering it on, colors are vivid with a slight oversaturation which gamers and movie fans will love. White balance appears stark and clean, while the reds, blues, and greens look consistent without any smudging in transitions. VA panels are famous for their undefeated contrast levels. The C34F791 boasts of excellent grayscale and color performance, providing inky blacks and extreme color accuracy that can go head to head with some of the older 10-bit monitors we have seen.

We tested the C34F791 with our current favorite benchmark title, Battlefield 1, and the greens in the scenery appeared lush and alive, while the subdued shades of the desert sands and the concrete gray of the bunkers seemed natural. The murky atmosphere of the maps as the fog or rains roll in also tested the C34F791’s merits, with colors transitioning perfectly when viewed through a sniper scope from a distance in the adverse weather to seeing it up close. The tighter 1500r curvature also helped immerse us in these early 1900 battles, since the peripheral views appeared closer to the face especially when we plaster our faces to within two feet of the gorgeous screen. Then, you would only need a great-sounding pair of headphones to complete the gaming experience on a whole new level.

Of course, Samsung markets the C34F791 as a gaming monitor, imbuing it with important features like its 100Hz refresh rate and Freesync functionality. Punching up our settings to ultra on our RX480 test GPU to flex its processing muscles, and results came out with FPS fluctuating from 50 to 60FPS. Freesync does wonders to create a smooth experience to go with the fantastic image qualities of this model. 100Hz isn’t a lot by today’s standards, but we found it to be sufficient for the purpose of the C34F791, which lies more in visual enjoyment rather than competitive speed. You can always turn down your settings if your AMD card cannot maximize 100Hz, but we recommend gamers to maximize texture and FOV levels while turning off anti-aliasing and HBAO for full effect.

The visual fiesta is just too good on the Samsung C34F791 for you to sacrifice settings for snappiness. While we did not get a chance to measure input lag, we can say that this product offers a high standard when it comes to connective feel. We did not notice any delays or miscalculations between control timing, so for the most part, the C34F791 is every bit an excellent gaming monitor. The 4ms pixel response isn’t as fast as TN panels, but we did not notice any detrimental ghosting or smudging except for a few minor flaws which you can only see if you look hard enough. Against the massive 34-inch viewing space, looking for artifacts will prove to be difficult. Lastly, we loved how Samsung’s quality control and assurance executed this refined product since our demo unit did not have any uniformity issues or backlight bleeding on the corners which are both known issues for curved monitors.

The Samsung C34F791 is now selling for little under a thousand dollars.  We can safely say that this product is well worth its price tag. The color and contrast performance is stunning even when using it out of the box. The Korean company is apparently trying to stomp its way into the market with a newly-found knack for gaming pedigree, and the C34F791 makes a clear and unquestionable statement. But despite that fact, Samsung still opted to use its classy and modern design cues which include a unique but functional stand, a direction we love since it sets itself apart from the overused gaudy gamer concept. The Samsung C34F791 is a must buy if you are in the market for an ultra-wide gaming monitor, but we do hope they hear the pleas of the Nvidia users and release a G-Sync version of this fantastic product.