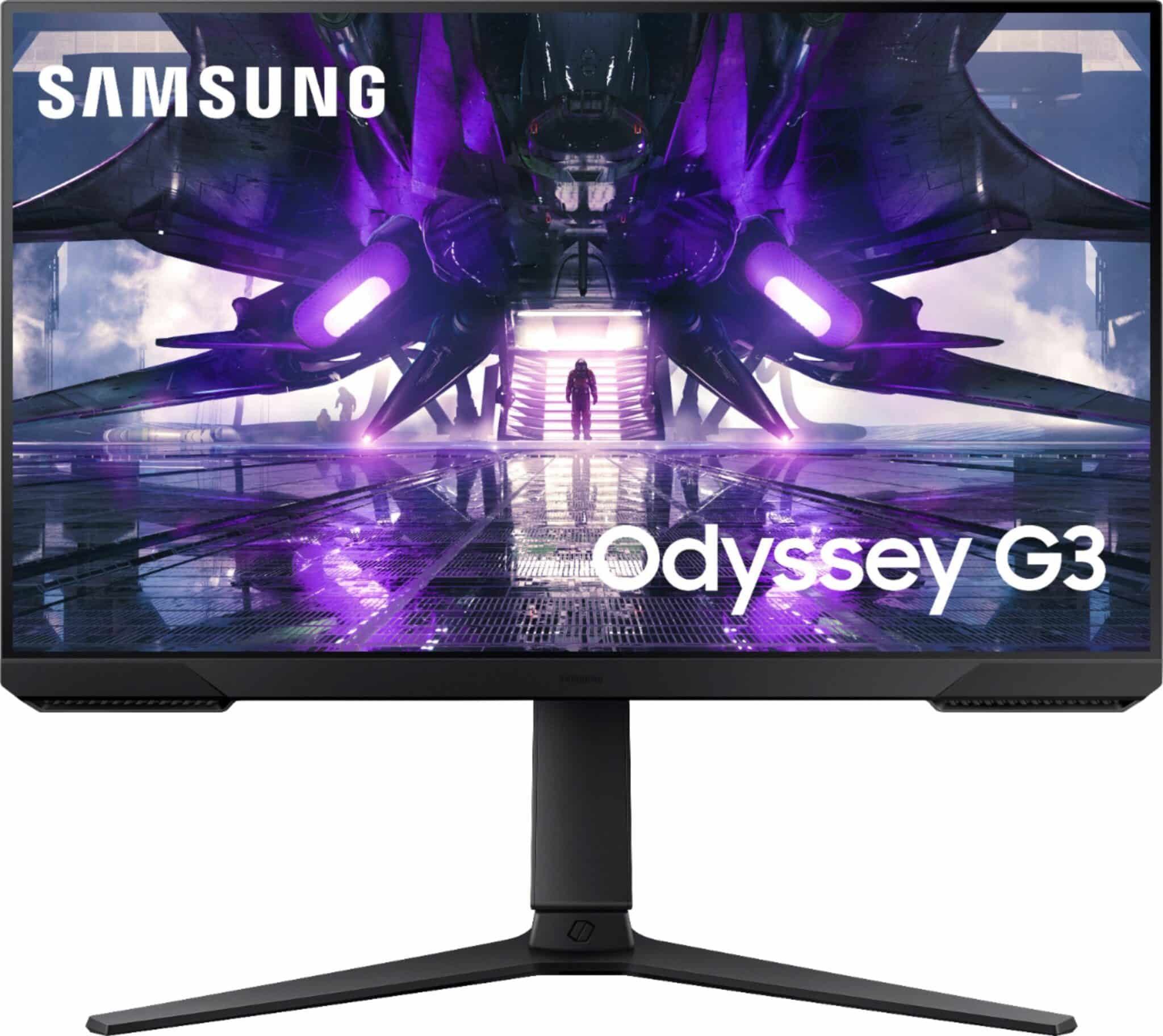 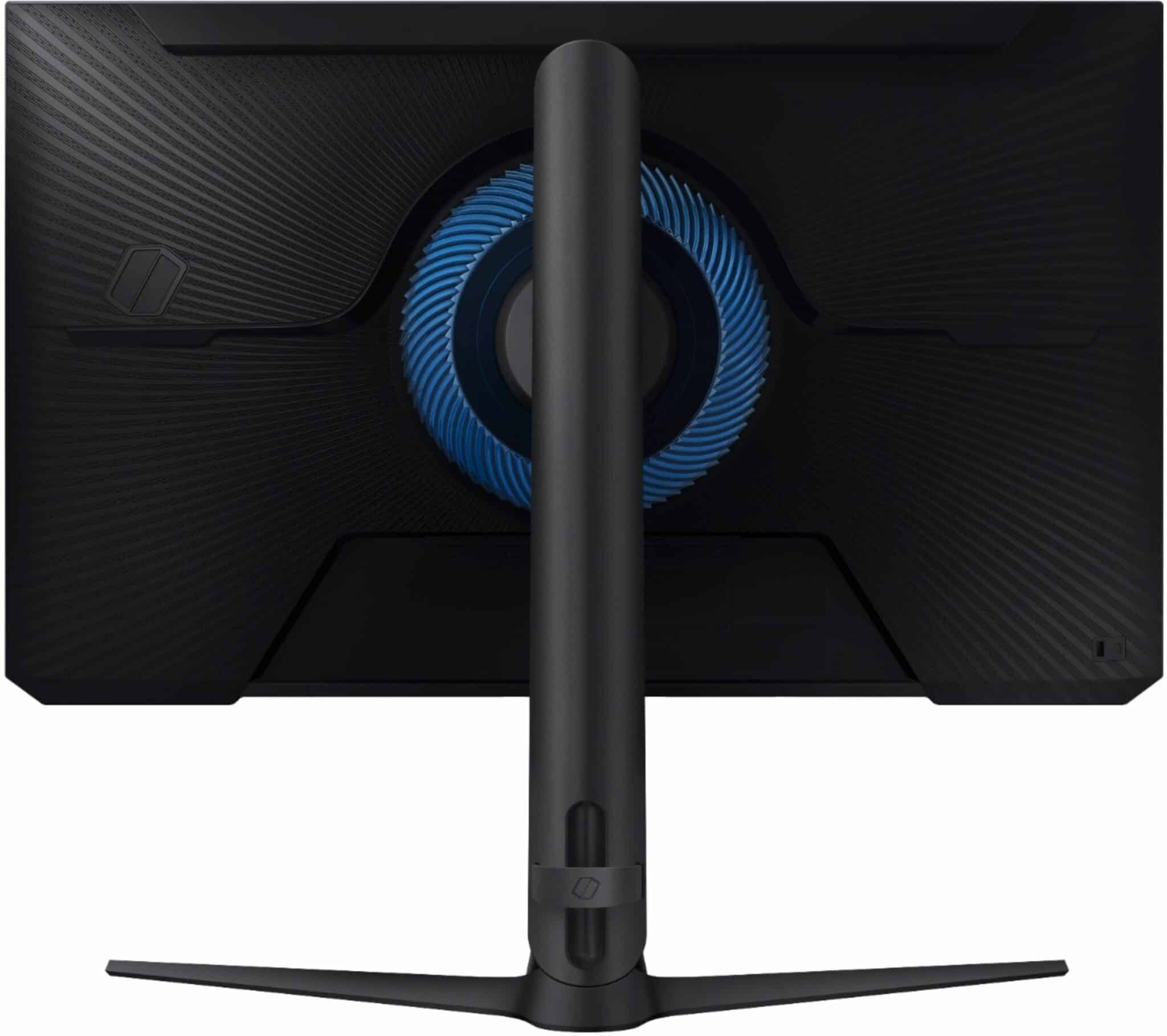 The Samsung Odyssey G3 S24AG30 sports a redesign over its predecessor which looks more gamer-centric without going overboard. The device still has the same matte black finish so it won’t clash with most setups and it’s easy to clean. The display is bezel-free on three sides, but you will still see slim inner borders when it’s in use.

The monitor has received some slimming down in the dimensions department which is considered environmentally friendly since the product uses fewer materials. The monitor only needs 8.62 inches of depth from your desk as opposed to the almost 11 inches of its predecessor. It’s also lighter, meaning it’s more portable and easier to move around for those who rearrange often.

The Samsung Odyssey G3 S24AG30 also has a blue ring at the back surrounding its stand’s attachment point. This would have RGB or blue LEDs on higher-end models, but it’s only a decorative addition for this model.

Build quality for the Samsung Odyssey G3 S24AG30 is decent, but it is not as good as the top-tier models in some areas. The plastics used aren’t that thick so they will flex if you squeeze the monitor too hard. The stand is plasticky as well, but it manages to be stable so the screen won’t wobble while you are gaming.

The Samsung Odyssey G3 S24AG30 lacks a few creature comforts, but it does have an OSD joystick for your convenience. The knob is located under the Samsung logo so you don’t have to reach around for it like if it was placed at the back. This is a handy feature to have since it takes less time and effort to adjust something as simple as the monitor’s backlight.

The included stand offers full adjustability so it is easy to get a viewing angle that will suit your needs. You can tilt, swivel, pivot, and adjust the height of the screen, unlike other entry-level models which are often stuck with tilt. You can use VESA mounts with 100 x 100 bolt patterns, but they are only necessary if you have multiple screens or if space is limited.

Connectivity on the Samsung Odyssey G3 S24AG30 is also limited to video inputs, but that’s all you need to be honest. The panel at the back includes a slot each for DisplayPort 1.2 and HDMI 1.4, along with a 3.5mm jack. It could use some USB ports considering its price range, but those aren’t essential for the monitor’s functions.

The Samsung Odyssey G3 S24AG30 also doesn’t have speakers which would have added value to it and helped to justify its higher price. We know gamers usually prefer headsets for better immersion and focus, but speakers do have their uses.

The Samsung Odyssey G3 S24AG30 sports a 24-inch VA panel with a 1920 x 1080 resolution, a 144Hz refresh rate, and a 1ms boosted response time. The backlight has a 250 cd/m2 output while the contrast ratio is listed at 3000:1 like most VA panels. This model is the entry-level option in the Odyssey lineup so it doesn’t have special features like HDR and local dimming.

1080p monitors are sometimes considered low-end, but they are still relevant and commonly used everywhere. The resolution isn’t too sharp so they are great for reading and it’s not too demanding so you can get away with a budget build to enjoy fast-paced games. These characteristics also make them cheaper, but there are high-end models with double or triple the refresh rate in the market.

The Samsung Odyssey G3 S24AG30 renders 99% sRGB and around 71% DCI-P3 which is decent for gaming purposes. The default accuracy is a bit better this time since the deltaE average is only at 2.55 which already looks balanced. Most users won’t need to calibrate this model so only a few tweaks such as setting the brightness are in order.

Calibrating the Samsung Odyssey G3 S24AG30 reduced its dE average to 0.84 which is better than the predecessor. However, we don’t think it’s worth getting a colorimeter just to tune a monitor like this since it’s less ideal for color-critical work. Colorimeters can cost as much as the monitor itself, so we recommend going with a prosumer model if accuracy is important.

Its backlight reached 239 cd/m2 at 100% while its contrast reached a whopping 4765:1 at 100% brightness. The screen has excellent black luminance, so night scenes are convincing and well-defined. This is the main reason why VA monitors are also popular although they are noticeably slower in pixel response time.

As mentioned, the Samsung Odyssey G3 S24AG30 has a disadvantage in blurring performance when compared to IPS panels. It shows smudging in fast nighttime scenes, so you need to set the overdrive to its Fast level. However, it’s weird that enabling Adaptive Sync will lock the monitor’s response time settings so it might not be wise to use it in some cases.

The Samsung Odyssey G3 S24AG30 is compatible with both FreeSync and G-Sync so you can use VRR with either GPU brand. This is handy so you have more options to choose from in the currently unstable GPU market. Input lag sits at 5ms at 144Hz so delays or de-synced instances won’t happen while you are gaming.

The Samsung Odyssey G3 S24AG30 is a great choice if you want a high contrast screen with great colors out of the box. We like its design, but some aspects like physical durability could use some improvements. It has the necessary gaming features, but it’s pricey for a monitor that doesn’t include valuable extras.

We feel that you could get more out of the price you have to pay for the Samsung Odyssey G3 S24AG30, especially now that the market is very competitive. It is also prone to blurring which is an issue that some VA gaming monitors have already solved with effective overdrive implementations. It’s a decent buy, but you have to catch it during a sale to make it a practical choice.