This year, the Samsung Odyssey Neo G9 is arguably the most exciting monitor with its flagship-level specs and awe-inspiring resolution. The original G9 was a hit, but it did have a few limitations that the latest iteration should address. The Samsung Odyssey Neo G9 needs a small investment, but let’s check out what it can do to see if it is worth every penny. 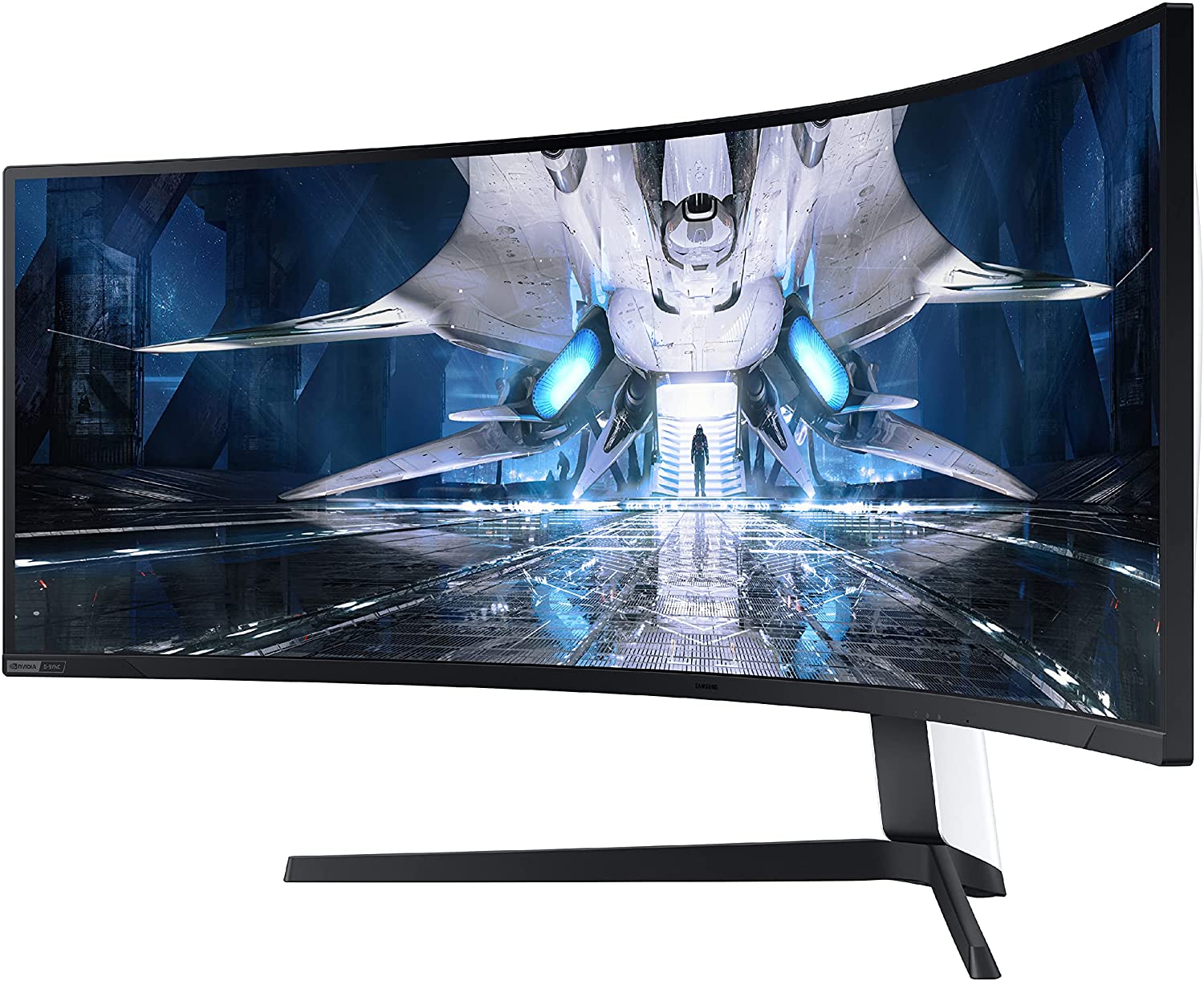 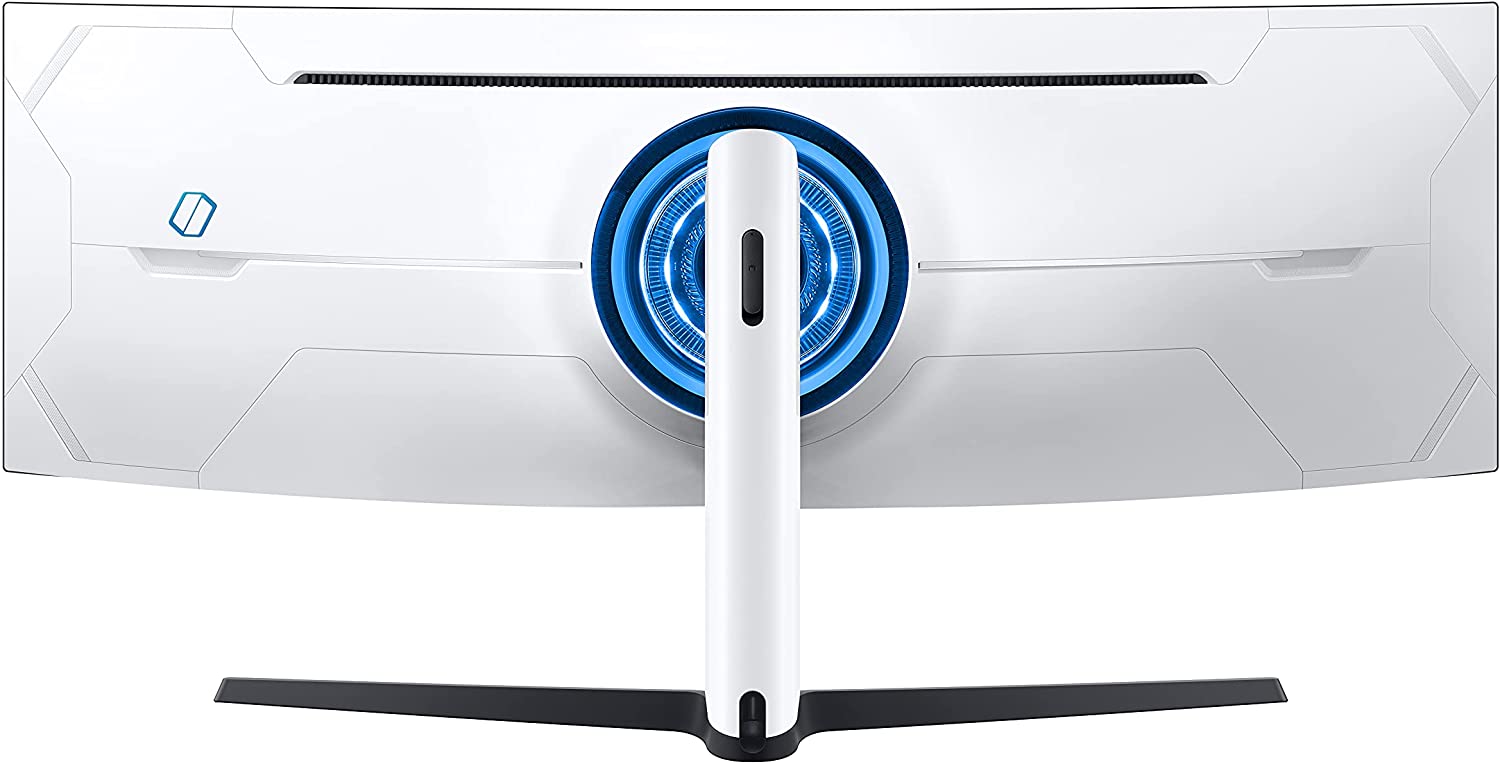 The Samsung Odyssey Neo G9 only received minor changes on the outside, retaining its space-aged look. The device has a glossy black shell and a matte black body that looks gorgeous for gaming and studio setups. The display is bezel-free on three sides, but you do get modest inner borders that aren’t distracting at all.

Taking note of the Samsung Odyssey Neo G9’s dimensions is a must before buying since it is humongous! It needs almost four feet of width and a foot and a half of depth to clear itself from your peripherals. It is also heavy at almost 40 pounds, so ask for help to avoid an expensive disaster when you are setting up.

Build quality for the Samsung Odyssey Neo G9 is excellent since it uses high-quality materials with a robust design. There are no cosmetic defects, and the device doesn’t have soft or flexy panels that seem like they will break with minimal force. The stand can handle the display’s weight, so wobbling only happens if you accidentally nudge the screen on its edges.

This model also includes the Infinity Core Lighting feature at the center of the monitor’s back panel. It can only do 52 colors, but we’re sure it’s still quite possible to get a matching shade for your setup. You can also use Samsung’s CoreSync feature to match the lighting to the game’s effects for an even better immersive experience.

The monitor has a single joystick tucked under the Samsung logo, so you don’t need to reach for it to adjust something. Imagine extending over two feet to reach it if it was at the bottom corner of the cabinet like other monitors. A remote or app would come in handy in this situation, but joysticks are easy to use in most cases.

The equally massive stand included with the product offers tilt, swivel, and height adjustments for your convenience. It would be best if you put the screen at the dead-center of your seat to enjoy its 1000r curvature, so having some flexibility will come in handy. You can also use VESA mounts, but it is only necessary if your space cannot accommodate the Neo G9’s massive dimensions.

The Samsung Odyssey Neo G9’s connectivity layout changed a bit since it only has one DisplayPort 1.4 as its main. The upgrade here is its two HDMI 2.1 slots with higher bandwidth, although you still should use DP 1.4 for your PC. You also get two USB 3.0 ports for accessories, but USB-C is missing to add flexibility.

The Samsung Odyssey Neo G9 doesn’t have speakers, but ultrawides like this are meant to be used with high-end headphones or speakers. They will enhance the immersive aspect of the monitor since it’s pretty much guaranteed that they will sound more detailed and powerful. It should include a pair for the price, but they understandably excluded it from the design.

The Samsung Odyssey Neo G9 boasts a 49-inch 1000r curved VA panel with a 5120 x 1440 resolution, a 240Hz refresh rate, and a 1ms MPRT response time. The backlight has a whopping 2000 cd/m2 peak while the contrast ratio starts at 2500:1. This monitor comes equipped with mini LEDs for superior HDR performance.

The 49-inch screen and the 5120 x 1440 resolution of the Neo G9 are equivalent to dual 27-inch 1440p screens. It is sharp enough to make games look cleaner and more attractive, but it doesn’t make small objects like microscopic text. It’s great for any use, but what we love about it is how it envelops your visual sense if you sit in the perfect position.

The Samsung Odyssey Neo G9 renders more than 100% sRGB and around 93% DCI-P3 for excellent vibrancy in games. Its default accuracy isn’t perfect, with a deltaE average of 2.56, but most users won’t notice the difference or minor color errors. The screen looks good out of the box, so most users will only need a few tweaks, like adjusting its brightness setting.

Calibrating the Samsung Odyssey Neo G9 reduced its dE average to 0.67, excellent for a gaming-grade display. You are going to need a colorimeter to achieve this, and those don’t come cheap. Most users will be happy with the default setting, so the gadget is only necessary for those who work with color-critical tasks.

Panel uniformity on the Samsung Odyssey Neo G9 is even better than what we’ve seen on some of its predecessor’s thanks to its unique backlight. The screen doesn’t have backlight leaks or clouding issues, so it looks evenly lit. There are some instances where halos show up when HDR is active, but that’s natural for monitors with mini LED FALD backlights.

Pixel response time is great as well, even it has a slower VA panel. The monitor’s 240Hz refresh rate does a good job at minimizing blurring, and they only appear in dark scenes with swift motion. The device has an overdrive function, but they aren’t available when FreeSync or G-Sync is active.

The Samsung Odyssey Neo G9 is compatible with both FreeSync and G-Sync, so you won’t be stuck with one GPU brand if you want to enjoy the benefits of VRR. The GPU market is unstable, so it’s always nice to have the freedom to choose between the two brands. Input lag sits at 3ms at 240Hz, so delays or de-synced instances won’t be an issue for all types of games.

The Samsung Odyssey Neo G9 is a fantastic gaming monitor if you are willing to invest a big wad of cash for it. Its exceptional HDR performance, along with the 240Hz super ultrawide screen, is a sight to behold even when it’s compared to the first G9 monitor. Its imaging numbers aren’t perfect, but the monitor doesn’t need complex calibration to get the job done.

Most of the Samsung Odyssey Neo G9’s upgrades are internal, which is not bad. However, we’d like more functionality such as the addition of USB-C ports or premium speakers to enhance its value per dollar further. Overall, it is an excellent buy, but you have to look away from the total cost when you press that checkout button.