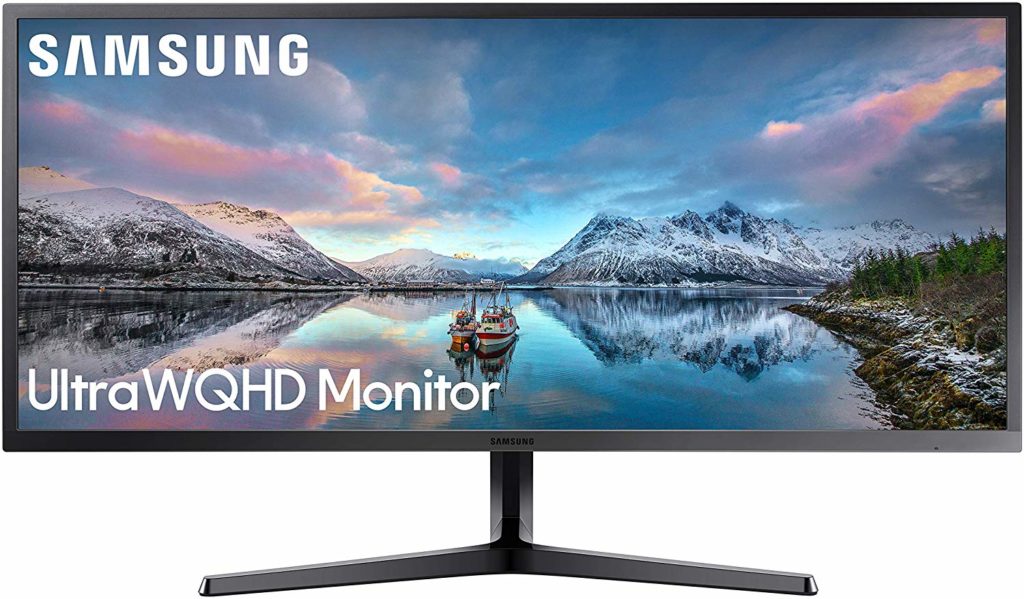 The Samsung S34J550 offers a QHD ultrawide screen with excellent contrast and decent color quality at an all-time low price that you can’t ignore. This model brings the premium category below the $500 price point, making it an attractive solution for a wider audience. The Samsung S34J550 seems like its too good to be true at $400, so let’s check out what you can expect from this very practical display solution.

The Samsung S34J550 features an understated design that will make it fit well with most setups whether if it’s for your battle station or the office. The combination of matte black and gunmetal makes the monitor look like it means business, but it also gives it a clean and sleek look. The display area isn’t bezel-free, but the flushed design makes the borders seem unnoticeable despite their thickness.

The cabinet for the Samsung S34J550 isn’t as intrusive since this monitor is flat, but the device will take up a considerable amount of space on your desk. The Y-shaped base takes up 9.5 inches of depth, but it provides sufficient stability for the upsized display. You can opt for VESA mounting to save precious desk space, but that creates additional cost which will break the value proposition for some users.

Build quality for the Samsung S34J550 is more than decent since there are no cosmetic defects or a feeling of cheapness from the product. The parts are manufactured with precision, so you will find that they fit together perfectly. The low center of gravity of the stand’s attachment point does induce a bit of wobble, but the device won’t turn over easily.

We also like the fact that Samsung almost always uses OSD joysticks for most of its monitors, including its budget offerings. The location at the rear corner may make it hard to reach for some users due to the width, but it’s still easier to use than a myriad of buttons that you can’t see. It also doubles as the power button, so the device looks cleaner since there are fewer knobs that visibly stick out on the chassis.

The biggest downside of the Samsung S34J550 is its tilt-only stand which limits your viewing angle options. The attachment towards the lower part of the cabinet also gives it a lower center of gravity, making it seem like the monitor will topple over easily. Thankfully, the product stands stable, plus you can opt for VESA mounting via the 100 x 100 bolt pattern at the rear. 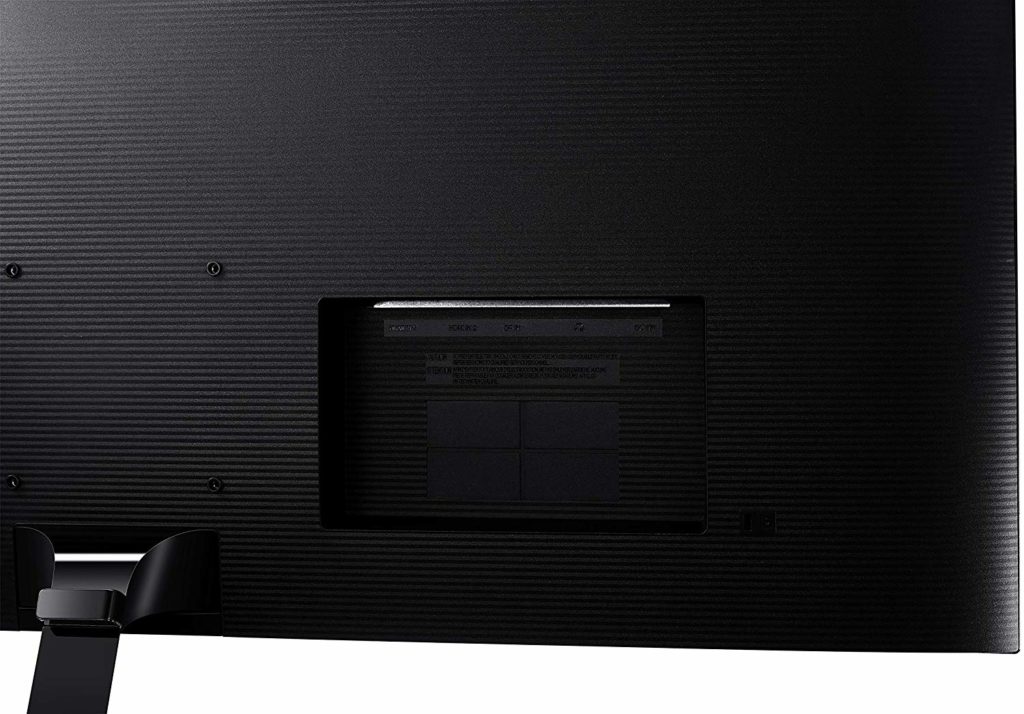 Connectivity on the Samsung S34J550’s concealed I/O panel at the rear is excellent since you get everything you will need for daily operation. Video inputs include DisplayPort 1.2 as the primary along with an HDMI 2.0 and HDMI 1.4 port for secondary devices. There is a 3.5mm jack for headsets, but you don’t get USB slots for accessories with this variant.

There is also no built-in speakers on the Samsung S34J550, but we think that’s fair considering how low the price is. Those add-ons are typically only used for light audio duty such as background music, so many often forget about using them anyway.

The Samsung S34J550 sports a 34-inch ultrawide VA panel with a 3440 x 1440 QHD resolution, 75Hz refresh rate, and 4ms response time. The backlight is limited to 250 cd/m2, but contrast is exceedingly high at 3000:1 compared to other panel types. This model is flat, but that doesn’t mean its a less attractive option that the curved variants since you still get a horizontally expanded viewing area.

Ultrawide QHD monitors like the Samsung S34J550 have a pixel density of 110 PPI which means they offer more details than your average office display. This also means that the desktop space will be considerably larger, giving multitaskers more room to work with. Gamers also love monitors in this form factor since graphics are sharp and well-detailed, while the wider FOV creates an immersive effect that often costs a hefty premium on other variants.

The Samsung S34J550 offers decent color quality starting with 100% coverage of the sRGB gamut that has a few extensions in some shades. However, color accuracy is dismal at DeltaE 3.67, meaning some shades will look discolored when compared to real life. Calibrating the monitor with a colorimeter is beneficial since it will bring down the errors to around DE 2.4, but this means that the product isn’t suitable for photo editing purposes.

Color temperature is slightly warmer than usual, so browsers will look more yellowish than white on the Samsung S34J550. Taking the time to tweak the RGB sliders is a good idea, especially if you don’t have access to a colorimeter which can make it easier to balance the tone out for you.

The most considerable strength of the Samsung S34J550 is its strong performance in contrast which reaches as much as 4450:1 at around 50% brightness. The screen doesn’t get very bright, but setting the backlight to around 50% gives you a more ideal 140 cd/m2 output. Gamma is slightly off at 2.15, but the washing out of colors is lessened thanks to the former.

Panel uniformity, on the other hand, produced mixed results since there is some clouding on the Samsung S34J550’s upper corners. A white haze becomes visible in the adjacent quadrants when you display an all-black image, while there is some noticeable loss of contrast in dark scenes from games like Modern Warfare. Take note that this aspect varies between unit to unit since not even the best quality control in the world can produce two identical panels.

You also can’t expect competitive-grade pixel responsiveness from the Samsung S34J550 which uses VA technology. The screen shows noticeable ghosting in fast-paced sequences, so opting for the overdrive feature is ideal if you wish to play on this model. Using the latter’s Faster setting helps lessen the trailing and persistence with very little overshoot that will not be noticeable during gameplay.

The Samsung S34J550 is a FreeSync monitor, but it also works with G-Sync compatibility after manual activation. This makes the monitor an affordable display solution for both sides since you don’t have to spend a fortune to chase exclusive VRR features. Input lag sits at 11ms at 75Hz, so there are no noticeable delays even if the device isn’t the fastest we’ve seen.

Thoughts on the Samsung S34J550

The Samsung S34J550 is a practical choice if you want more screen space for games and multitasking. The price is unimaginably low for a QHD ultrawide, but there are a few quirks you have to learn to live with. The VA panel’s contrast ratio is one of the strongest we’ve seen, but color quality takes a hit when it comes to accuracy.

This fact means theS34J550 is less ideal for editing and content creation, but there are specific models for that purpose. We think that’s a bit forgivable if you consider this model’s dollar to pixel ratio which other brands will struggle to match. The Samsung S34J550 is an excellent entry-level choice if you want more screen space, but specific or meticulous users might have to look elsewhere.