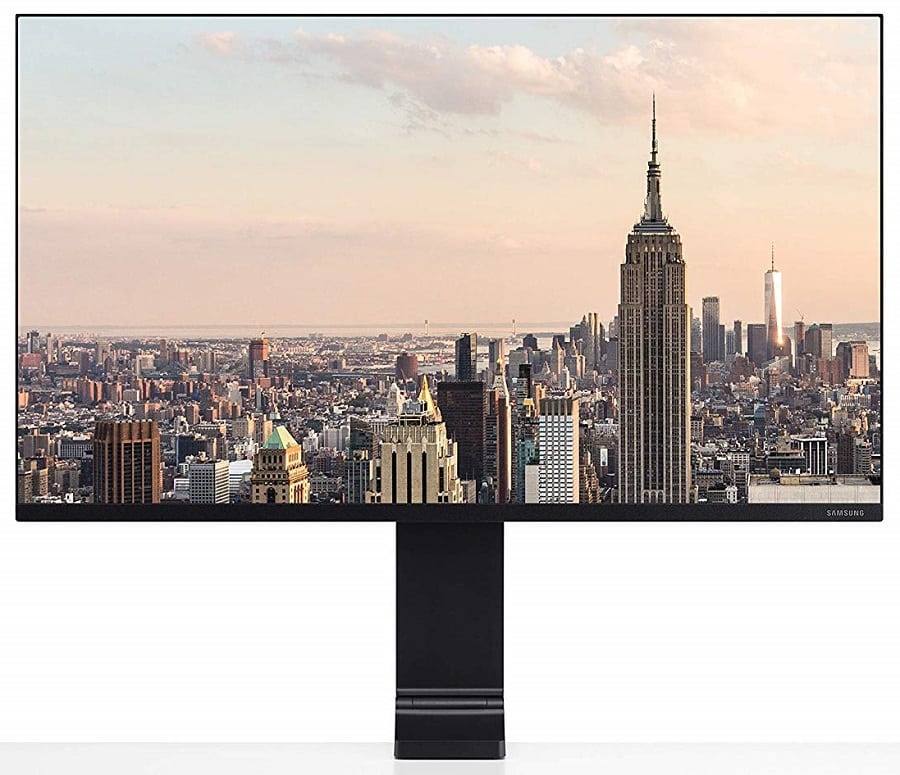 The Samsung Space S27R750 is an all-new concept that combines a unique and functional design with high-performance specifications to push trends further. This latest release from the Korean tech giant also holds a 144Hz refresh rate VA panel that should be perfect for games as it is for productivity. The Samsung Space SR75 expands on the meaning of versatility, but does it post decent scores where it matters most? 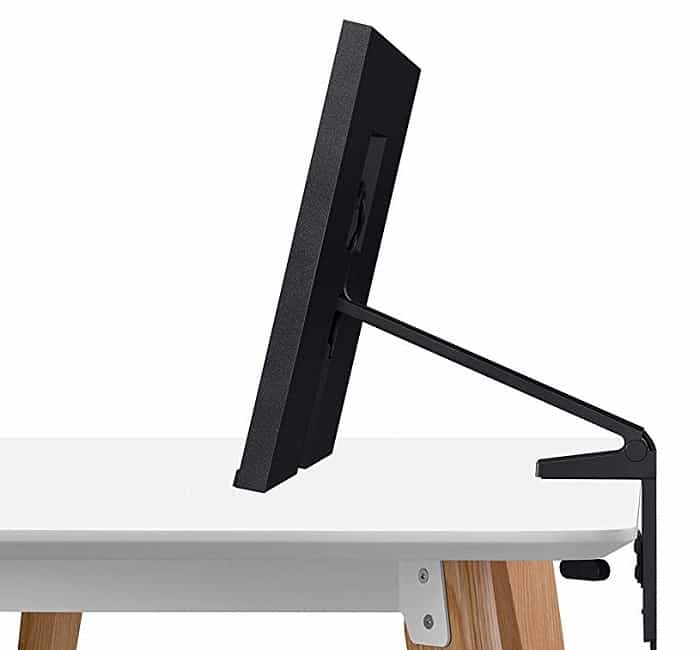 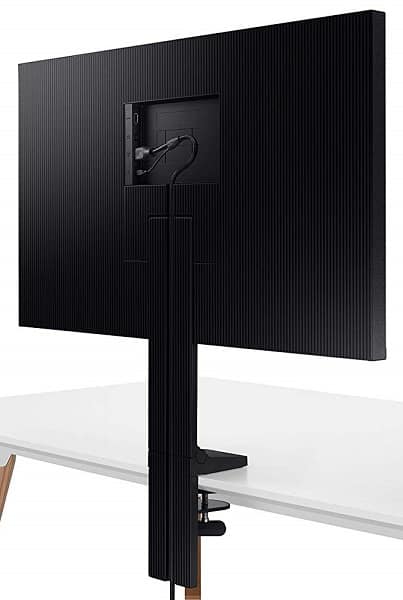 The Samsung Space S27R750  features one of the freshest designs we’ve seen so far in the market. The monitor sports a clean and sleek black finish with a matte texture that fits quite nicely in a posh environment. The display area is bezel-free save for thin panel borders and a discreet bottom strip that will not distract your view.

The cabinet itself is quite thin at a little over an inch making the Samsung Space S27R750 ideal for flush mounting. Despite that fact, Samsung managed to keep build quality and durability at its peak since the product doesn’t show any manufacturing defects. The device doesn’t consume too much space on your desk, and the overall design puts emphasis on it.

In fact, that’s what makes the Samsung Space S27R750 so unique in a market where bulky stands and bases are still a thing. This device includes an ergonomic monitor arm that blends into indents on the chassis while giving users a lot of headroom in height and tilt adjustments. Users get a total of eight inches of vertical travel, but what’s best about it is you can set it flat against a wall if it’s fully extended.

This capability allows users to free up virtually every square inch of desk space save for a few which the edge clamp will use up. It’s a fantastic concept, but it does have its weaknesses which could defeat the product’s marketing for some users. The arm doesn’t provide swivel or pivoting motion as dictated by design, plus lowering the screen will bring it closer to your sitting position.

Some users who need to set the monitor at a lower height might have to move back to get a comfortable view. We think a VESA monitor arm is still better since its more versatile, but that kind of flexibility isn’t free and it’s not compatible in this case. In truth, the Samsung Space S27R750’s unique design liberates limitations for certain spaces such as offices, but it does incur new ones for those with the desk real estate to play with.

But on a positive note, we love the cable management feature the brand calls the Y-cable structure. The arms of the stand have channels that run through the lengths so you can neatly tuck in your input wires until it reaches the I/O panel. This design is a cleaner solution than simple holes and clamps much to the delight of cable management enthusiasts. 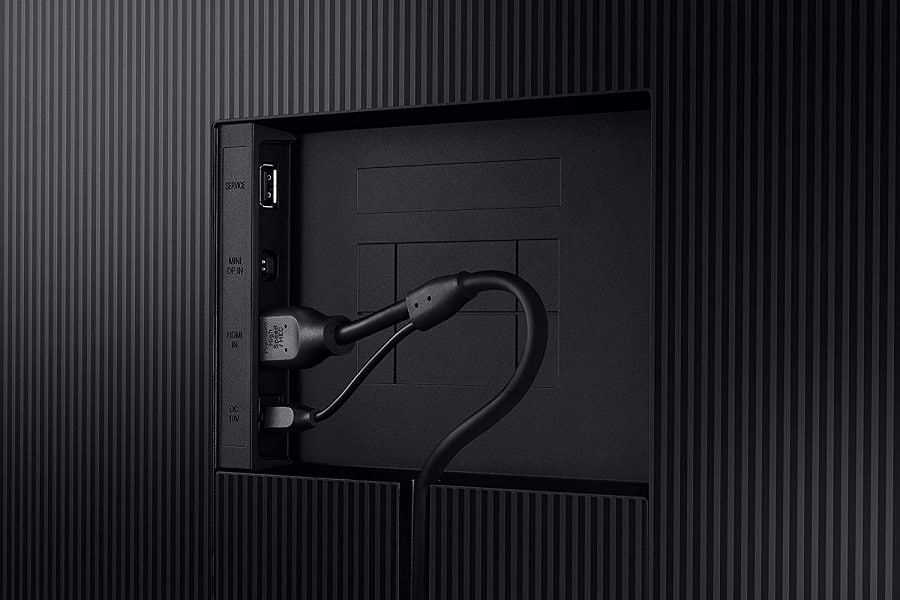 What’s disappointing about the Samsung Space S27R750 is its very limited connectivity panel at the back. We commend Samsung’s design engineers who did a great job at tucking this feature neatly and stealthily, but we wish they added more connectors to it. The layout only includes Mini DP 1.2 and HDMI 2.0 for inputs and nothing more.

The Samsung Space S27R750 which is advertised heavily for productivity spaces doesn’t even have USB ports which are essential for accessories such as thumb drives. We think it defeats the space-saving and cleaning goal of the design since keyboard and mouse cables will still need to run amok on the desktop. Built-in speakers are also absent, but that’s excusable for super thin cabinets like this one.

The Samsung Space S27R750 sports a 27-inch VA panel with a 2560 x 1440 resolution, 144Hz refresh rate, and 4ms response time. A 3000:1 contrast ratio is also specified along with a 250 cd/m2 backlight that is a bit on the low side. The latter should be sufficient for most uses, but a more potent lighting solution is always better to further enhance the depth of the screen.

The Samsung Space S27R750’s size and resolution fit right into the sweet spot for gaming and professional use. 27-inch screens hold QHD resolutions perfectly since you don’t need scaling while the sharpness doesn’t break up or diminish. This form factor is well-liked thanks to this kind of balance which is comfortable and easy on the eyes.

The VA panel on the Samsung Space S27R750 is ready for use right out of the box thanks to its impressive scores. It’s able to put out 97% of the sRGB gamut with a Delta E of only 2.3 which means the product is suitable for users who can’t be bothered with calibrating the display. Users who know their way around with a colorimeter can increase accuracy to a DE of only .9 which is professional-grade for most reviewers.

Color temp and gamma at default is also within acceptable limits, although some scenes might appear a bit darker than desired. Calibration with a colorimeter fixes the gamma to track closer to 2.2, but we reckon it’s pointless for most gamers who might like the extra noire. It was impossible to attain a perfect 6500K temperature, but both default and calibrated are close enough not to warrant a noticeable difference.

The Samsung Space S27R750 exceeds its brightness specification by reaching a maximum output of 305 cd/m2. Contrast is excellent at 2900:1 which enables the monitor to produce deep, inky blacks and well-defined grayscale levels. The backlight also enables the screen to handle a well-lit environment such as offices or studios.

The one thing where the Samsung Space S27R750 review unit could use some improvements is its panel uniformity. The flaws produced some issues in dark scenes since the corners appear lighter if you look close enough. This shouldn’t bother gamers when action takes place, but still, images will reveal the variance.

Motion handling on the Samsung Space S27R750 is at a decent level since disruptive blurring and image retention aren’t issues. However, the screen shows minor banding in some darker colors, but we don’t think it will be an issue for general use, including gaming.

The Samsung Space S27R750 is FreeSync compatible which makes it ideal for AMD GPU users who want to enjoy buttery-smooth frames. The product isn’t compatible with G-Sync at the time of this writing, but a future driver update could change that. Input lag is limited to 11ms which doesn’t make this model the fastest but still allows it to hold its own in gaming applications.

Thoughts on the Samsung Space S27R750

The Samsung Space S27R750’s uniqueness makes it a conversational piece for your home or office setup. The design is excellent and functional, but it could use some improvements in crucial areas such as connectivity and flexibility. We love that the monitor doesn’t take up considerable desktop space, but for some, the trade-off could be a deal breaker.

Image quality for both default and calibrated states is impressive, while gaming performance from the Samsung Space S27R750 is more than just decent. Again, it could use some improvements in a few aspects, but most users won’t even notice what these flaws are. The Samsung Space S27R750 is a superbly priced and beautifully designed concept monitor, but it has a few minor limitations you have to live with.