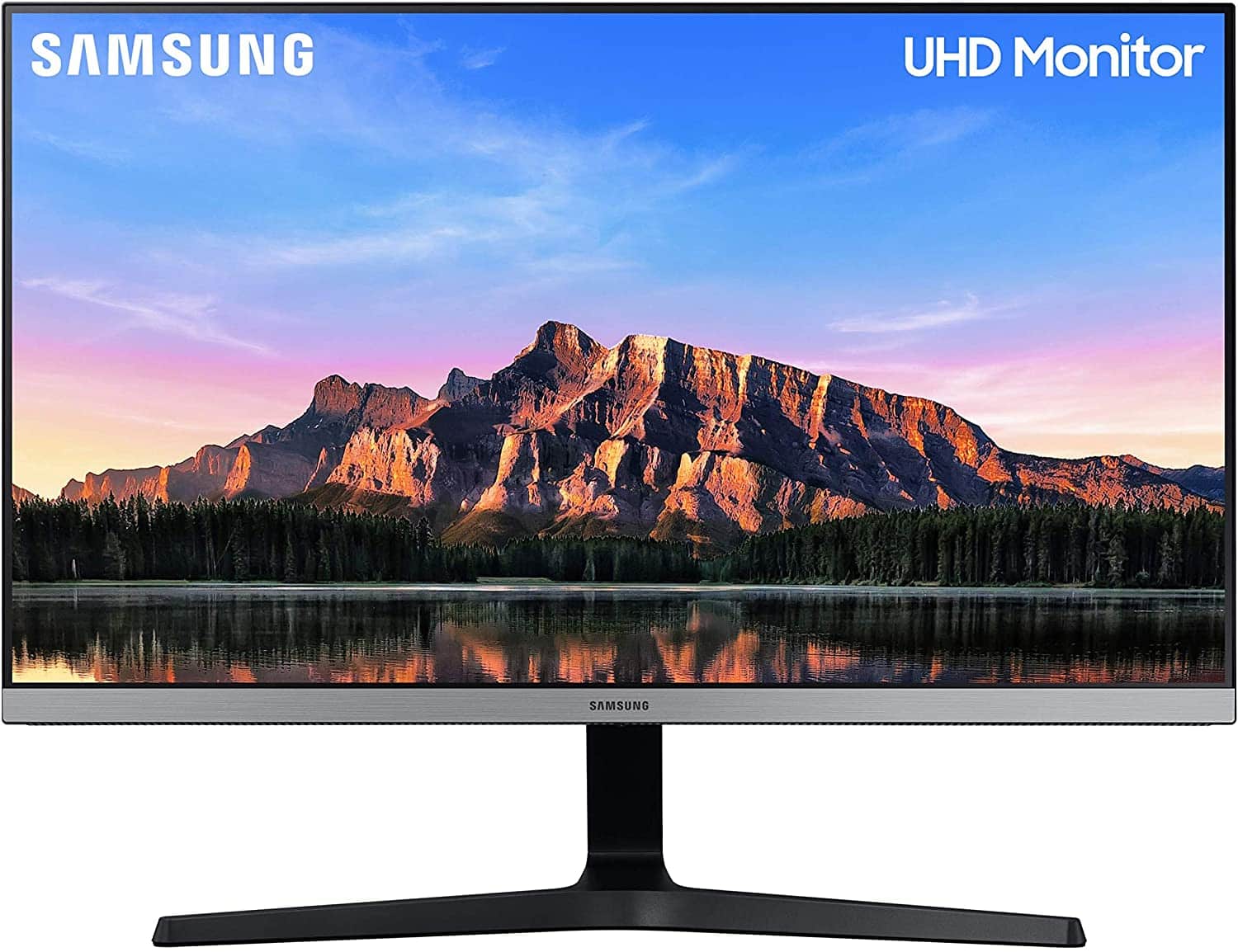 The Samsung U28R55 is a $300 4K IPS monitor designed for daily use, whether if it’s for casual gaming or work from home use. It replaces monitors like the U28H750 and the U28E590 which had good TN panels, but noticeably weak in the viewing angle and vibrancy categories. The Samsung U28R55 is irresistible if you want to upgrade to a 4K computing experience, but let’s check it out first to see if it’s worth the money. 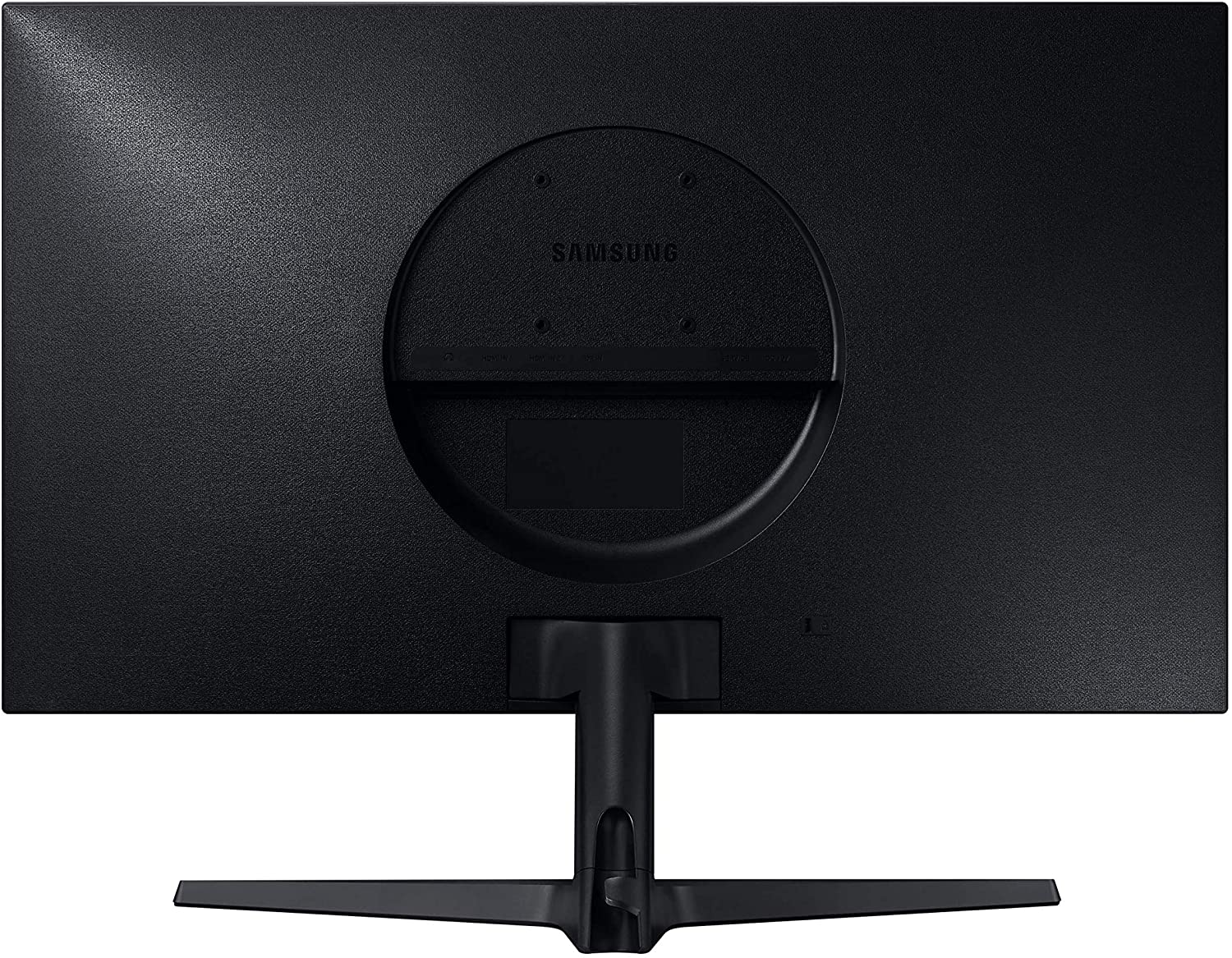 The Samsung U28R55 is a business monitor so it looks simple and elegant, but that also goes for a lot of the brand’s monitor series. The chassis is finished in matte black, but there is a silver strip in front which accentuates the monitor’s sleekness. The screen is bezel-free on three sides,  but you will still see panel borders which are normal for modern monitors.

The Samsung U28R55 isn’t the biggest monitor you’ll see on Amazon or any other retailer, but it’s considerably larger than typical displays used in offices and schools. Some users might need to clear some space, especially since its base has a wide reach and it eats up almost 10 inches of depth. It doesn’t weigh a lot at 12.79 pounds and it’s easy to move around, but it isn’t portable.

Build quality for the Samsung U28R55 is decent even if it’s mostly made out of plastic. The materials used are sturdy and thick enough, so the chassis panels won’t flex or crack easily. The stand has excellent footing on the desk, but the screen wobbles if nudged unintentionally due to the low position of the attachment point.

The Samsung U28R55 has an OSD joystick for convenience, unlike many budget-oriented products in the market. It’s located just under the Samsung logo at the bottom bezel, so it’s easy to reach since you don’t have to lean in. Samsung has been doing this with almost every tier they offer, and we wish other brands would follow suit.

The stand included with the Samsung U28R55 only offers tilt, so positioning the monitor can be tricky at times. It’s overdesigned and quite large, and it should at least include height adjustment to sweeten the deal. You can opt for VESA mounts with 75 x 75 adapters, but that adds cost which may put a better-equipped alternative in range.

The Samsung U28R55 offers DisplayPort 1.2 and two HDMI 2.0 slots, plus a 3.5mm analog jack for headphones. We like extras, but frankly, that’s all you will ever need for daily use since your motherboard has USB slots anyway. Another great quality of the layout is it can handle your PC plus two 4K gaming consoles, so you get your money’s worth in this regard.

The Samsung U28R55 doesn’t have speakers, but that’s fine since the price is quite excellent. Headsets or desktop sets will sound better anyway, so this isn’t a big deal for most users. It’s always nice to have a backup for work from home use, but at $300, it’s unfair to complain.

The Samsung U28R55 sports a 28-inch IPS panel with a 3840 x 2160 resolution, a 60Hz refresh rate, and a 4ms response time. The backlight has a 300 cd/m2 maximum while the contrast ratio is listed at 1000:1 like most IPS panels. This model isn’t certified for HDR performance, but it is compatible if you feed it an HDR10 signal.

4K screens at this size can sometimes look too sharp, especially if you are going to use it for productivity. However, it’s perfect for games and entertainment since the extra crispness and level of detail will be a welcome treat. You can use scaling if small letters bother you or you can find the correct seating distance to help with this dilemma.

The Samsung U28R55 covers 100% of the sRGB gamut with some extensions and around 88% of DCI-P3. That’s a decent score for a budget display, especially since it looks richly saturated in person. The deltaE average out of the box is at 2.42 which isn’t bad for daily use but could use some adjustment for professional use.

Calibrating the Samsung U28R55 resulted in a much better dE average of 1.22 and a more balanced color temperature. It’s not prosumer-grade color quality, but it’s already usable for editing work and content creation. The downside is that you will need the assistance of a colorimeter to get this, and those don’t come cheap from retailers.

The Samsung U28R55 reached 361:1 in SDR and it punched up to 390 cd/m2 when it receives an HDR signal. The contrast ratio on the other hand topped out at 951:1 and 1033:1 respectively. The screen can fight a decent amount of glare, but it’s unable to produce deep blacks, unlike its VA-based siblings which are more prominent in Samsung’s lineups.

Panel uniformity for the Samsung U28R55 was good since there were no considerable backlight leaks on its edges. Some clouding in the corners of the screen can become visible in dark scenes, but its not as big of an issue in other instances. Take note that this aspect varies between every unit, so there are better and worse specimens out there.

Pixel response time for the Samsung U28R55 isn’t the best since there were some blurring and persistence in fast or contrasting transitions. Using the overdrive’s Fastest setting helped, but it doesn’t clean up the screen completely. This won’t be an issue for casual gaming, but fast-paced titles will reveal the limitation at certain times.

The Samsung U28R55 is FreeSync monitor, but it doesn’t work with Nvidia’s G-Sync Compatible mode. This issue is common with 4K monitors, but the numbers that do not work with Nvidia’s VRR are dwindling every release cycle. Input lag sits at 12ms at 60Hz, so delays are still unnoticeable even if that’s slightly higher than the average we’ve seen.

Thoughts on the Samsung U28R55

The Samsung U28R55 is a decent pick if you want to upgrade to a 4K screen that’s ideal for daily use. The screen looks sharp and clear, and it offers vibrant colors with decent balance and accuracy. The monitor has limitations, but it can handle your PC and up to two next-gen consoles with its connectivity layout.

However, handicaps almost always come with lower prices, especially for monitor types that are usually reserved for the upper tier. This particular model could use some improvements in some aspects such as its contrast ratio or its stand design. The Samsung U28R55 is a great buy at its low price point, but you have to live with some limitations that some may consider to be deal-breakers.

Search
NEW
POPULAR
You are here: Home / Reviews / Samsung U28R55 Review – Affordable 28-Inch 4K Monitor for Mixed Use
This website uses cookies to improve your experience. We'll assume you're ok with this, but you can opt-out if you wish.Accept Read More
Privacy & Cookies Policy