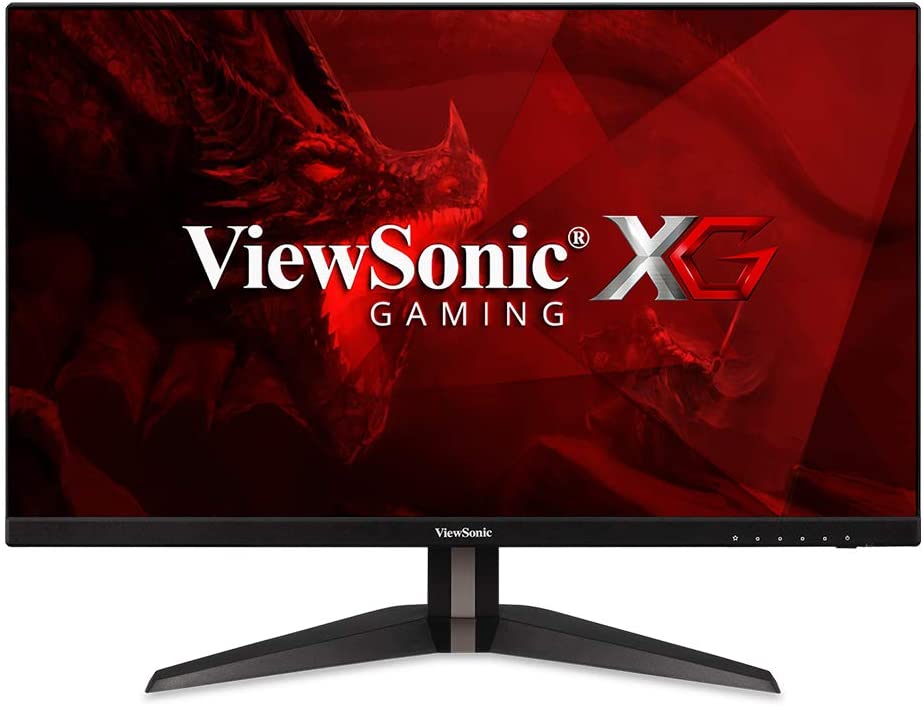 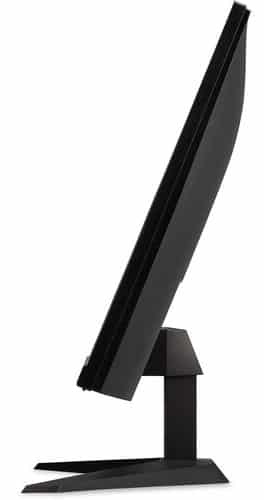 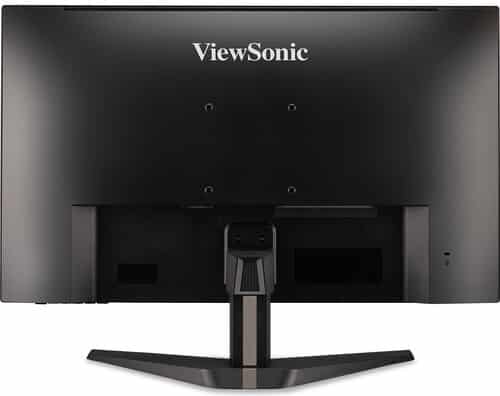 The ViewSonic VX2768-2KP-MHD didn’t change much when it comes to aesthetics, but it does have a few subtle updates. The monitor uses the same matte black aesthetic the predecessor has, but that always works for most users. The display is bezel-free on three sides, making the monitor look more pleasing and bigger than its actual size.

The ViewSonic VX2768-2KP-MHD’s size is modest for its class since it doesn’t have a massive stand behind it. It only needs a little under eight inches of depth from your desk, so it’s going to be easy to fit into your peripheral collection. You also won’t have trouble moving it around since it only weighs in at 11.5 pounds.

Build quality for the ViewSonic VX2768-2KP-MHD is acceptable and reasonably good for a budget model. The plastics used are durable enough to prevent cracking, and there are no uneven seams or gaps on the edges. The stand has a slight wobble, but it only happens if you nudge the screen or if you are pressing its OSD buttons.

One downside with the ViewSonic VX2768-2KP-MHD is it still uses OSD buttons instead of an easy-to-use joystick. The keys are now located under the bottom bezel with etched labels, so they are easier to reach. However, this doesn’t feel like an upgrade since you still need multiple key presses to get to a specific sub-menus in the monitor’s software.

The stand included with the ViewSonic VX2768-2KP-MHD unfortunately only offers tilt so positioning the monitor will be restricted. We understand that it’s a budget model, but alternatives like the Gigabyte M27Q offer more in this regard. You’d have to spend a bit more for an ergonomic monitor, or you can opt for VESA mounts if you need more flexibility.

Another upgrade the ViewSonic VX2768-2KP-MHD received is in its I/O which now includes the usual DisplayPort 1.2 and two HDMI 2.0 ports. The latter can handle the latest gaming consoles and their 120Hz modes, so you can use this as an all-in-one display if you have them with your PC. Unfortunately, there are no extras aside from the analog jack, but that’s forgivable at the monitor’s current price range.

The ViewSonic VX2768-2KP-MHD manages to squeeze in a pair of built-in speakers that are useful as backups. Their sound quality isn’t great and they distort easily, but it’s always nice to have an option for basic audio needs. However, gamers will most likely prefer headsets so these won’t get much use unless the monitor is also utilized for work from home arrangements.

The ViewSonic VX2768-2KP-MHD sports a 27-inch IPS panel with a 2560 x 1440 resolution, a 144Hz refresh rate, and a 1ms MPRT response time. The backlight has a 350 cd/m2 maximum while the contrast ratio is listed at 1000:1 like most IPS panels. This model doesn’t have HDR features since its focuses mainly on clarity and good color rendering.

27-inch 1440p screens are considered the sweet spot for gaming and productivity for their balanced appearance. There is an increase in sharpness and space, but small objects like text do not become microscopic or difficult to read. However, take note that you will need a more powerful GPU with this display if you want consistently high framerates on modern titles.

The ViewSonic VX2768-2KP-MHD renders more than 100% of sRGB and around 93% DCI-P3 for richer colors. Default accuracy, on the other hand, could be better since the deltaE average out of the box was at 2.96. The monitor doesn’t have an sRGB preset to tighten this down for content creation, so you need to calibrate it to get better color correctness.

Calibrating the ViewSonic VX2768-2KP-MHD lowered the dE average to around 0.97  which is better and already suitable for editing work. Using the gadget balanced out the cool color temperature and made the screen look more natural. However, colorimeters aren’t accessible since they are pricey, so its not worth it since you can get away with a few tweaks to the OSD.

The ViewSonic VX2768-2KP-MHD’s backlight peaked at 410 cd/m2 while its contrast exceeded its spec at 1032:1. That’s great for an IPS panel, but that doesn’t mean this one can produce deep blacks like VA-based alternatives. Some dark scenes or black images can look washed out, but that’s natural for most IPS monitors in the market.

The ViewSonic VX2768-2KP-MHD had some backlight leaks at the top edge of the screen which added some clouding. The flaw is mostly noticeable in black images, but full-colored ones aren’t as affected even if there is some loss of contrast. Don’t worry though since this varies between every unit due to tolerances so there are better specimens out there.

The ViewSonic VX2768-2KP-MHD’s pixel response time isn’t as good as its predecessor since it shows some blurring in fast or contrasting transitions. Its overdrive modes didn’t do any good in erasing the slight smudging and persistence. It’s not ideal for competitive gaming, but casual titles won’t be an issue.

The ViewSonic VX2768-2KP-MHD is a FreeSync gaming monitor, but it also works with Nvidia’s G-Sync Compatible mode. It’s nice to be able to use both nowadays since both GPU companies have compelling options for 1440p gaming. Input lag is slightly higher at 6ms at 144Hz, but most users still won’t feel the difference in games.

Thoughts on the ViewSonic VX2768-2KP-MHD

The ViewSonic VX2768-2KP-MHD is an ideal choice for casual gamers who want a 144Hz IPS display with great colors. The panel is capable of excellent saturation, but it needs some tweaking to weed out the imbalances in the hues and color temperature. It doesn’t have a lot of extras, but these omissions are what helped lower the price drastically.

The biggest flaw with the ViewSonic VX2768-2KP-MHD is its motion handling which failed to compare to the current fast IPS models in the market. That and its stiff stand will be the deal-breakers in its segment since we now have better equipped and more capable alternatives at a slightly higher price. It’s a very practical choice for all-around gaming, but competitive players should look elsewhere.