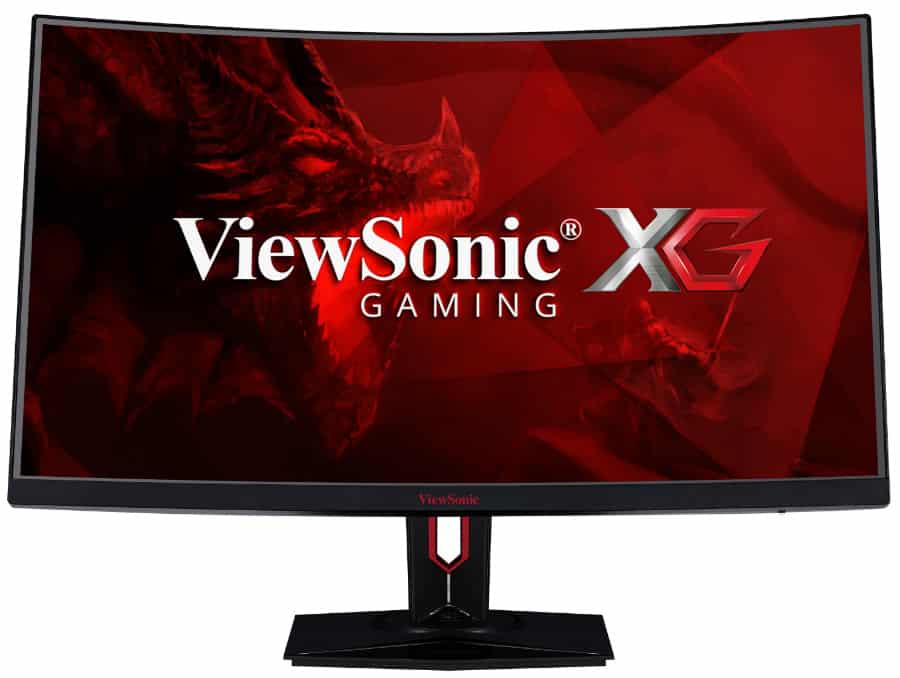 The ViewSonic XG3240C offers a large and richly-saturated curved screen with HDR compatibility at a very reasonable price. We love the brand for their no-nonsense gaming displays that provide tremendous value which effectively edges out the competition when the budget is concerned. The ViewSonic XG3240C presents a massive potential for both PC and console gaming, but what is it missing to be able to meet the price point? 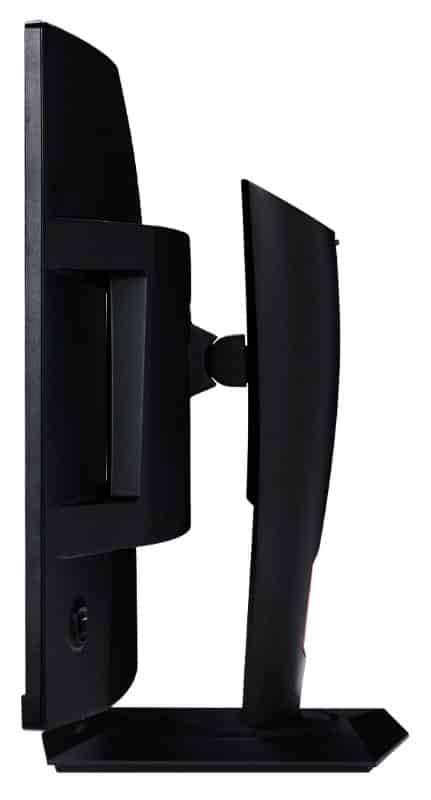 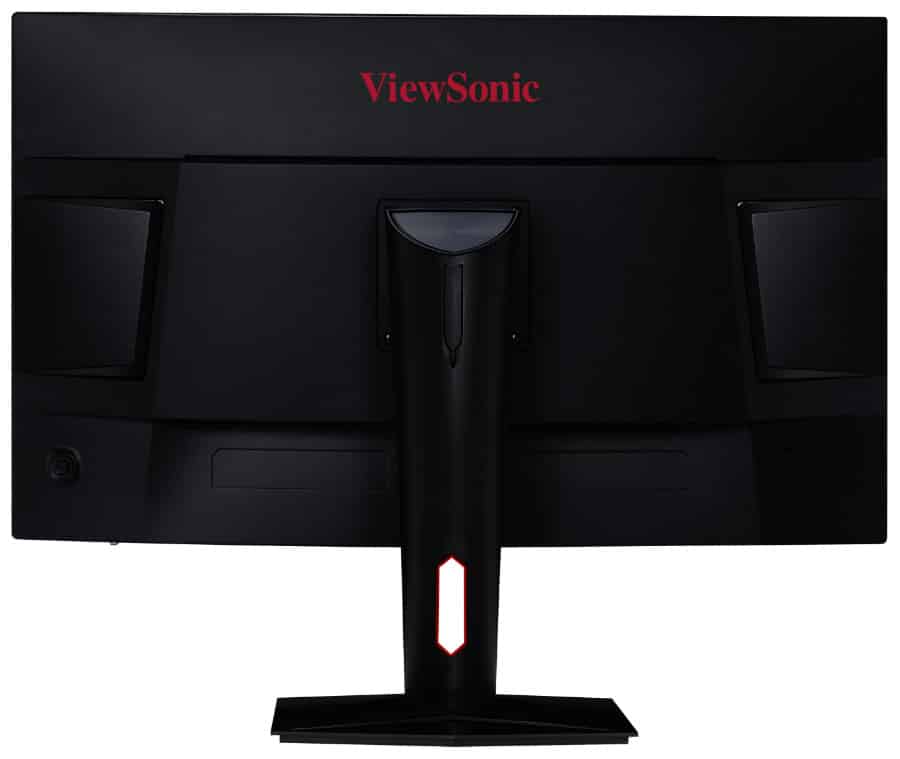 The ViewSonic XG3240C sports a similar aesthetic to the XG2530, but is slightly modified for a larger, curved display. The monitor comes with a matte black finish and subtle red accents in some parts. The face doesn’t employ bezels, but there is a minimal border on the three sides made possible by a dual-stage design.

The ViewSonic XG3240C is massive and heavy at a little over 20lbs, so make sure that you have sufficient space on your desk. The device when fully assembled consumes 10.24 Inches of depth, so you may find it difficult to fit a keyboard with wrist rest. However, don’t worry since this model is only slightly larger than a standard 27-inch variant like the Asus PG278QR.

Build quality is excellent as expected since there are no creaks and the display holds its poise despite its size. The plastic materials used on the body don’t feel cheap, and there are no uneven seams or burrs on the edges.

The included stand for the ViewSonic XG3240C is flexible with adjustments for height, tilt, and swivel. You can’t pivot the display since it isn’t necessary and doing so will defeat the purpose of a curved screen. Mounting is also a possibility since this larger than the usual monitor is VESA compatible.

The ViewSonic XG3240C is equipped to handle a gaming PC plus a console or two thanks to its I/O layout. The panel includes DisplayPort 1.4 and two HDMI 2.0 slots that support the full resolution at 144Hz. There is also a total of four USB 3.0 hubs, two of which are on the side indent for easy access.

It’s a huge plus that the ViewSonic XG3240C includes a JOG button for OSD control instead of the usual and outdated layout. It’s located at the back and would take a bit of effort to reach, but this beats fumbling about in the dark with pesky buttons.

There is also a pair of 6-Watt speakers in the chassis of the ViewSonic XG3240C. The set is more potent than usual built-ins, but the sound quality is at best decent.

The ViewSonic XG3240C boasts a 32-inch VA panel with a 2560 x 1440 resolution, 144Hz refresh rate, and 3ms response time. A contrast ratio of 3000:1 is also specified, along with a 300cd/m2 backlight which is insufficient for HDR representation. The 1800r curvature isn’t too aggressive, yet it feels just right at this size.

One immediate concern is the panel’s lower pixel density due to the larger size. The ViewSonic XG3240C can only offer 94PPI which aren’t crazy-detailed, but still decent even if you look closely. 1440p will always look better on a 27-inch model, but the details and crispness are still there.

What’s fantastic about the ViewSonic XG3240C’s output is the extra rich look with deep shades and tones. The screen is capable of up to DCI-P3 coverage of 89.6% which is close to the requirements of true HDR. Accuracy, on the other hand, is exquisite since the errors max out at DeltaE 1.0.

There is no need to calibrate the ViewSonic XG3240C since doing so will only decrease the DeltaE to .90. Colors are lush and profound which makes the monitor perfect for gaming, but not for color-critical work. This model cannot switch to a sRGB mode, so it shows the extra vibrancy we described perpetually.

The color temperature for the ViewSonic XG3240C sits at 6480K, which is pretty close to the ideal D65 standard. Gamma could use a bit of improvement since it sat at 2.15, but the difference is negligible for gaming and movies.

One of the downsides we found for the ViewSonic XG3240C is its backlight which can only reach 260cd/m2 tops, falling short of VESA’s HDR400. But then again, the VA panel’s contrast ratio of 2600:1 makes up for it by offering deeper blacks and fantastic grayscale performance.

We tested the ViewSonic XG3240C with Destiny 2 in SDR and HDR mode, and the results are slightly disappointing. The benefits of HDR representation isn’t as profound as we’d expect due to the monitor’s permanent extensive gamut operation. Small details such as lighting and visibility did improve, but the lack of important specifications such as a stronger backlight come into play.

However, the noticeable strong points of the ViewSonic XG3240C is its size and vibrancy, which made the environments of the game look more engrossing. The glow of weapons and explosions are more eye-popping with this gaming monitor that comparable TN or IPS models. The high contrast ratio takes care of visibility and the richness of the image, so there isn’t much to complain about in the fundamentals of image quality.

This model is also a FreeSync-equipped variant so that AMD GPU users can enjoy tear and stutter-free gaming. The ViewSonic XG3240C is responsive due to an input lag average of 10ms, and a pixel response time which feels faster than typical VA models. The monitor handles motion well, so blurring and ghosting are minimal and should be unnoticeable to the general populace.

Thoughts on the ViewSonic XG3240C

The ViewSonic XG3240C is an excellent gaming monitor when it comes to image quality and responsiveness. The screen offers plenty of vibrancy and accuracy, plus, it handles motion at a higher level than some of its competitors. The size and curvature provide a pleasing and engrossing experience on both the PC and a console like the Xbox One X.

However, the biggest letdown is the HDR performance which did not offer a profound difference in color output. There is a slight increase in detail, but the screen’s permanent wide-gamut operation made if difficult to discern improvements. The ViewSonic XG3240C is an excellent gaming monitor, but take its HDR functionality as a valuable extra instead of the main selling point.