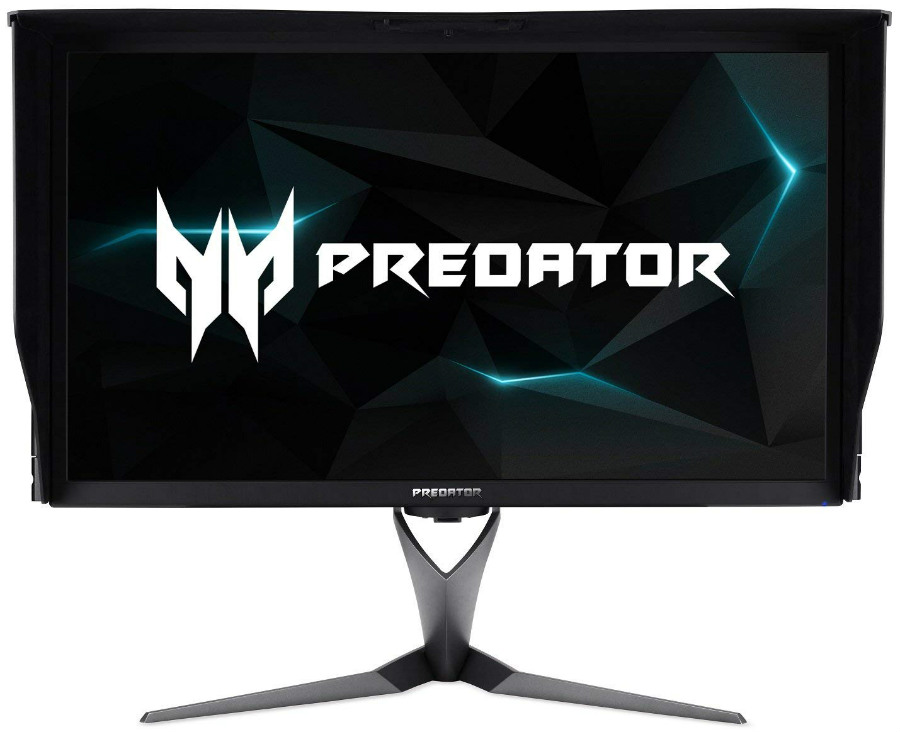 The Acer Predator X27 is a top of the line gaming display equipped with jaw-dropping features like a never before seen 4K 144Hz screen. The monitor incorporates several other high-end features such as full HDR support and G-Sync HDR for a jaw-dropping experience. Entry into the Acer Predator X27’s owners club costs a whopping two grand, leading us to ask if it is absolutely worth the price. 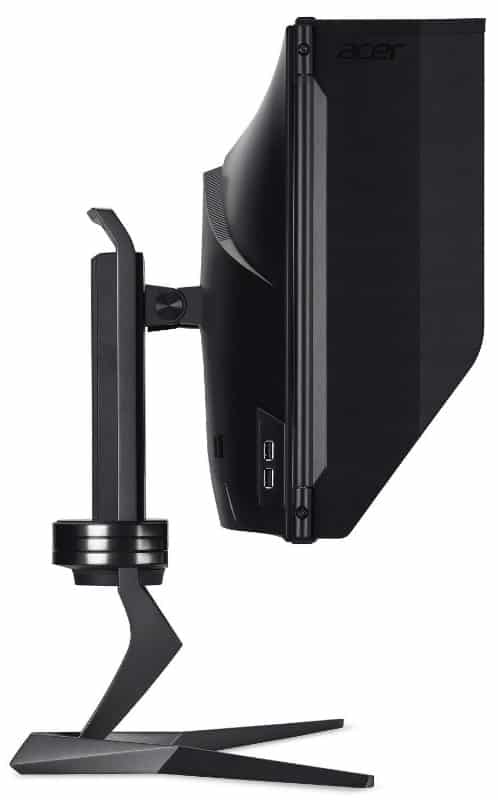 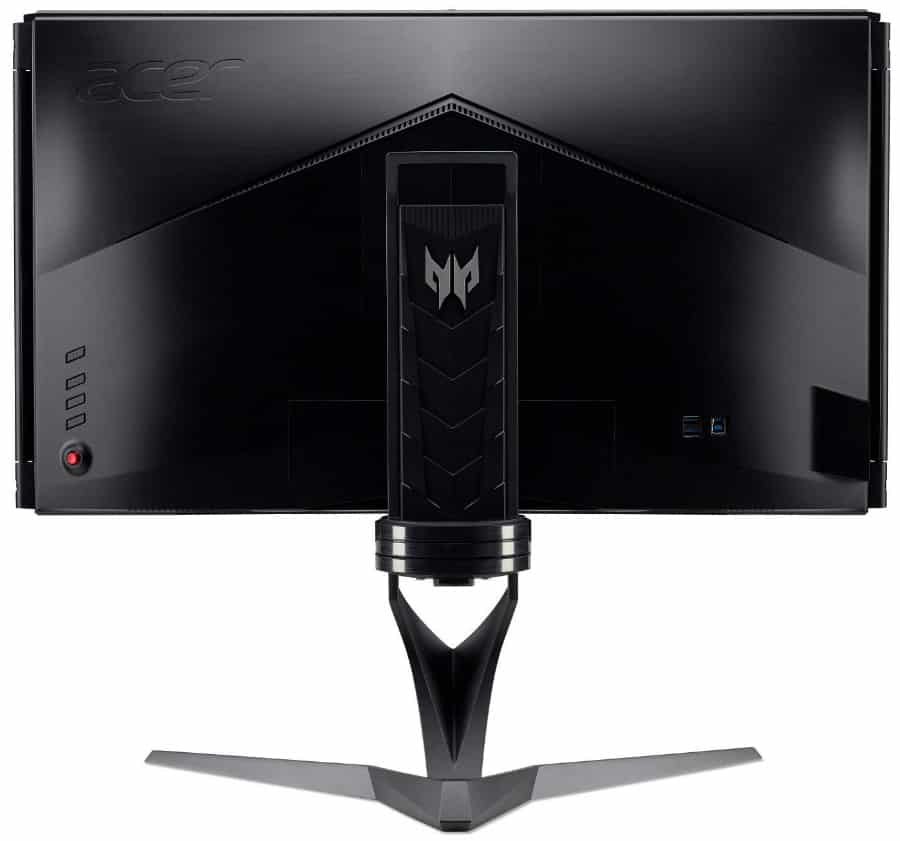 We honestly prefer the Acer Predator X27’s overall aesthetic because it is much more subtle than the Asus PG27UQ which is currently the sole alternative. This monitor’s chassis is finished in matte black with distinct Predator design elements, but without the typical dashes of red. The monitor isn’t bezel-free, but we think your eyes will be too busy feasting at the gorgeous output of this offering.

There is also a pair of shields or flaps on the flanks of the Acer Predator X27 which is meant to reduce glare on the monitor. For most users, these add-ons are useless, but they have some value in the X27. Gaming in a well-lit room can dispell the benefits of the FALD backlight, so having a level of protection is a must.

The Acer Predator X27 is still much simpler when facing the back since there are no fancy decorative elements such as RGB lighting. What stands out, however, is the aesthetics of the stand which adds a spine-like appearance to the monster monitor. The polished swivel joint and Predator logo add a luxurious appeal which a lot of gaming monitors usually exclude.

We love the sculpture-like design of the Acer Predator X27’s metal stand with a gunmetal finish. The sharp angles and thin lines of the base are what makes it attractive, but the design takes up a considerable amount of space. The device will consume up to fifteen inches of depth, so make sure you have a sizable desk before buying this expensive monitor. 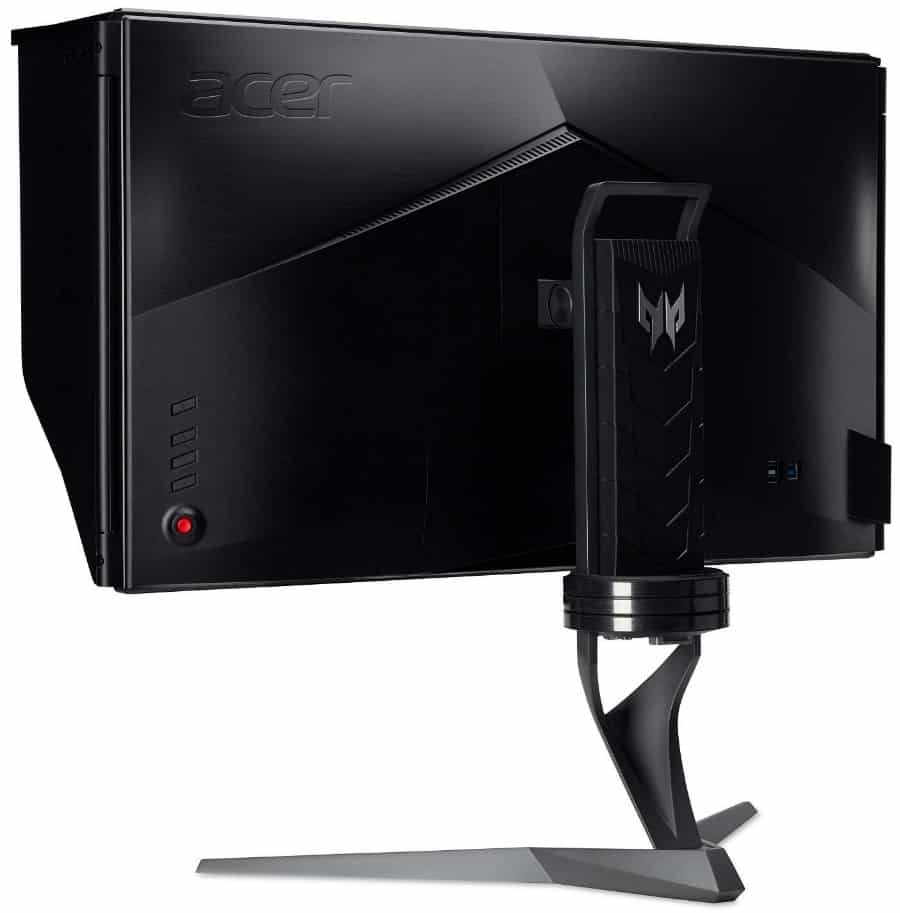 The mechanism for the Acer Predator X27 is relatively flexible, offering tilt, swivel, and a height adjustment range of five inches. You can’t pivot the display, but you can swap the included stand for a VESA mount for walls or desks. The problem is you need a proprietary adapter for it, although its already included in the package.

The Acer Predator X27 is well-equipped in the connectivity department despite having a G-Sync HDR module in its innards. The layout with a panel cover includes two DisplayPort 1.4 slots, a single HDMI 2.0 port, and five USB 3.0 receptacles for your accessories. Take note that you need to use the DP 1.4 slots for the 4K 144Hz output to work.

You also get a pair of 7-Watt speakers with the Acer Predator X27 which are decently powerful, but nothing to write home about. The set can get loud enough for gaming, but clarity and bass response suffers the higher you go. We still recommend a decent pair of headphones or bookshelf speakers which are critical to the experience this monitor will provide.

The Acer Predator X27 boasts a 27-inch IPS panel from AU Optronics with a 3840 x 2160 resolution, 144Hz refresh rate, and 4ms response time. The display includes a 600cd/m2 FALD backlight with local dimming and a maximum pulse of up to 1000cd/2 for HDR content. This mix of specifications is the current cream of the crop in the PC monitors which is delivered only by the X27 and the PG27UQ.

The IPS module for the Acer X27 sports a 10-bit color output to maximize the eye candy that the two grand pays for. The monitor is capable of 86% DCI-P3 or 98% Adobe RGB coverage, indicating that the monitor can offer excellent vibrancy. Enabling the sRGB mode will lock it down to 97% coverage, but we reckon most won’t bother with using that mode.

Color accuracy out of the box is a bit disappointing, considering that this product is relatively expensive. A DeltaE score of 3.5 adds a bit of inconsistency such as a hint of yellow tinting in stark white images. Acer pre-calibrates these displays to a color temp of 7000K which is slightly cooler to the eyes, but the default setup’s output looked closer to 6000K.

The Acer Predator X27 requires calibration with a colorimeter for you to be able to enjoy a lower DeltaE of .6 and a color temp that sits almost entirely at the D65 standard level. Gamma remains the same between the two states at 2.19, which excellent considering it’s one of the most difficult to control in other monitors.

The Acer Predator X27’s contrast ratio is lower than expected as well, reaching up to around 830:1 in standard modes. The numbers, however, jump up to 1350:1 when the FALD unit is running, adding a bit more depth and realism to the image output. This flaw is an issue when using this product at night, where black uniformity turns grayish with some cloudiness.

Panel uniformity could use some improvements since there are bits of backlight bleeding in some of the corners. The AG coating on the Acer Predator X27 is also a bit too reflective depending on the position of the display against your indoor lighting. We recommend using the included shields or blinders to reduce this issue which is detrimental to the monitor’s output.

Despite these comments, the Acer Predator X27 is still fantastic at producing an image most have never experienced before. The collective benefits of a higher refresh rate and a 4K resolution are definitely something to behold and enjoy thoroughly. The crisp details of a 4K monitor is unbeatable, and to see it this smooth and responsive is a game-changing experience.

But on the other hand, users need to be prepared to witness DisplayPort 1.4’s limitation, since it cannot handle the full bandwidth of 4K at 144Hz. There is a noticeable penalty in vibrancy when the monitor is at 144Hz due to the 4:2:2 subsampling. If you want to experience the colors this monitor is capable of, we recommend limiting the refresh to 120Hz which is still higher than the usual.

The Acer Predator X27’s FALD unit is exceptionally keen on handling fast-paced images. The backlight’s delay in games is limited to a single frame or less, making this solution way better than the Dell UP2718Q’s. Lighting halos or clouding may show up when bright images go against a darker backdrop, but that’s excusable in our books since you need OLED technology to eliminate the flaw entirely.

Playing games like Destiny 2 present massive improvements in the details such as the lighting on the weapons and the shadows in the environment. It’s also remarkable that the IPS panel on the Acer Predator X27 doesn’t have problems with image retention or ghosting. You can try out the Overdrive’s Normal setting if there are some noticeable trails, but it induces a bit of overshoot in some instances.

The Acer Predator X27 supports Nvidia’s G-Sync HDR which cures tears and stutters without affecting the HDR output. We know we’ve said that the tech is essential for ultrawides or QHD 144Hz displays, but it never been as critical as it is for this kind of screen. Remember, you are going to need two of Nvidia’s RTX 2080Tis to even begin to maximize this product.

Finally, the Acer Predator X27 is responsive enough with an input lag of only 12ms which is reasonable for monitors of this grade. E-Sports displays like the BenQ XL2546 will always be faster in this regard, but they cannot provide the eye-popping visuals and the fantastic improvements of HDR monitors.

Thoughts on the Acer Predator X27

The Acer Predator X27 is a fantastic monitor when it comes to providing eye-popping visuals through its 4K 144Hz HDR output. The monitor performs admirably in the responsiveness aspect so that gamers can enjoy every aspect of their selected genres. We also love the minimalist design of this model, preferring it over the RGB-laden aesthetic of the Asus PG27UQ.

However, we can’t help but feel that the Acer Predator X27 could use some improvements. The monitor has some flaws in panel uniformity and its tendency to show clouding or halos, but that’s an expected side effect of FALDs versus OLEDs. The Acer X27 isn’t worth it for everyone, but if you have the budget, this monitor is highly recommended.

Search
NEW
POPULAR
You are here: Home / Reviews / Acer Predator X27 Review – 4K 144Hz HDR Gaming Monitor with G-Sync
This website uses cookies to improve your experience. We'll assume you're ok with this, but you can opt-out if you wish.Accept Read More
Privacy & Cookies Policy