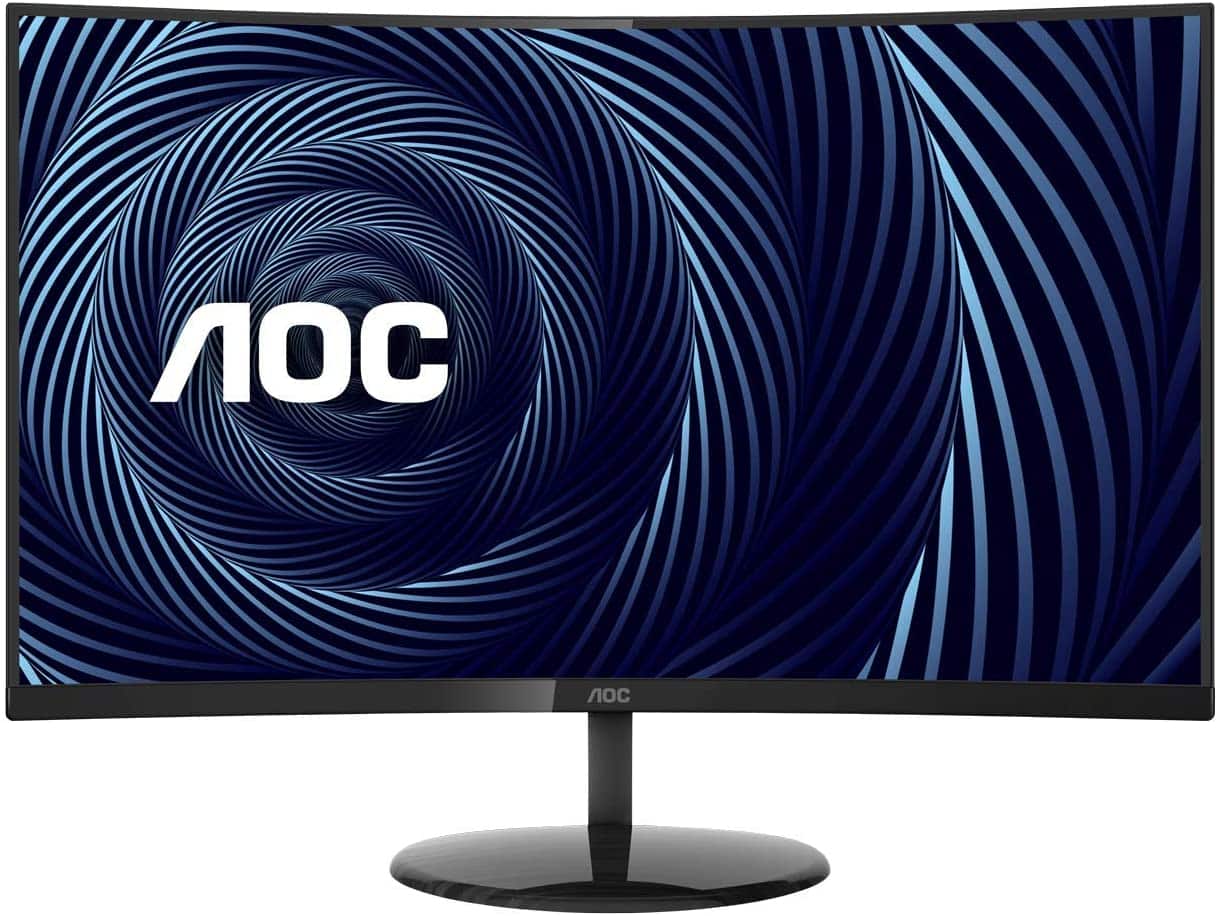 The AOC CU32V3 is an inexpensive 4K monitor that offers plenty of vibrancy and clarity at a very friendly price point. Curved 4K monitors aren’t common, and they are quite attractive for users who are on the hunt for an immersive visual experience. The AOC CU32V3 doesn’t have a lot of competition, but let’s check if this niche monitor is the right buy for your needs and budget. 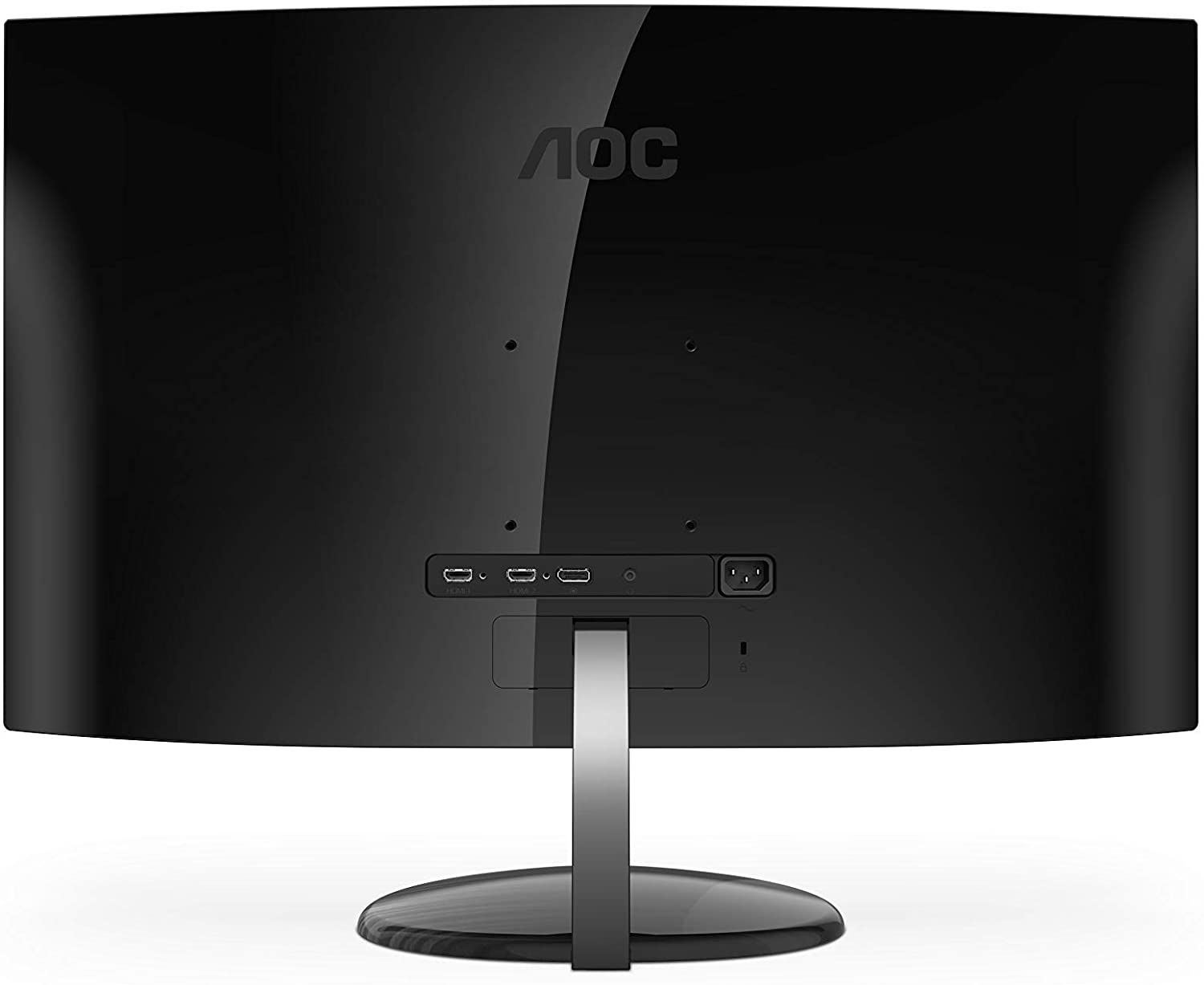 The AOC CU32V3 follows a minimalist approach to its design so it doesn’t stick out too much against your home or office environment. The monitor has a glossy black finish that’s accented with a silver stand and a black-marble-like base that looks quite attractive. The display is bezel-free on three sides, but even the bottom strip sits almost flush against the screen so it’s barely visible, especially when the monitor is turned off.

It is worth noting that the AOC CU32V3 is bigger than most monitors, so you have to prepare your desktop for it if you have a lot of peripherals on deck. The screen doesn’t weigh a lot at almost twelve pounds, but its width can be cumbersome if you have a compact desk and a pair of bookshelf speakers. We prefer VESA mounting for this monitor, but that might add cost which can throw your budget off if you are aiming to spend less for a 4K upgrade.

Build quality for the AOC CU32V3 is decent as far as budget monitors go and it doesn’t feel cheap in general. The plastics used are thick enough to prevent cracking and there are no cosmetic defects which can be much more noticeable due to the glossy finish. The included stand provides excellent footing for the monitor and it doesn’t seem like it will easily topple with a light tap.

The AOC CU32V3’s OSD can be accessed via a single OSD button which is both convenient and tiring to use after a while. It is easy to mistakenly input something unintended, so we recommend using AOC”s i-Menu software for simple tweaks instead. Software-based tweaking is a godsend for modern monitors since many users are already knowledgeable about adjusting and maximizing a computer display using its features.

The stand with the AOC CU32V3 looks appealing, but it only offers tilt for ergonomics. The trick with curved monitors is to find its dead-center and position yourself properly, but some vertical adjustments are always welcome since not all users are the same height with 100% identical chair dimensions. You can swap this part out with a VESA mount that has a 100 x 100 pattern, but that adds costs which can sometimes defeat the purpose of going with a budget model.

The AOC CU32V3’s connectivity layout is simplified as well since it only includes a slot each for DisplayPort 1.2, HDMI 2.0, and analog audio. That’s fine for most cases, including users with a gaming console or a Bluray player on the side. Extras like USB ports are handy, but it is unfair to expect some from a budget-oriented model.

You also don’t get speakers with the AOC CU32V3, but that’s forgivable as well since it’s priced low for a 4K monitor. You are better off with speakers or headsets anyway which will enhance the immersive experience this model can provide.

The AOC CU32V3 boasts a 32-inch 1500r curved VA panel with a 3840 x 2160 resolution, a 60Hz refresh rate, and a 4ms minimum response time. The backlight is limited to 250 cd/m2, while the contrast ratio is specified at 3000:1 like most VA models. This monitor doesn’t advertise any form of HDR capabilities, but that’s okay since great HDR performance isn’t available at this price point anyway.

The AOC CU32V3 size is perfect for 4K since it offers more room for the high pixel count to spread out more. The sharpness and details are more appreciable in this format and it doesn’t make small objects microscopic so it is still easy to read walls of text. The monitor works great for games, movies, and office work, so it’s an easy pick if you are looking for something better than regular office monitors without spending a small fortune.

the color output of the AOC CU32V3 is impressive since it can produce 125% sRGB and around 86% DCI-P3 which creates rich and vibrant images. The default color accuracy has a deltaE average of only 2.39 which isn’t perfect but is a superb score for a budget monitor. You don’t normally get these numbers with a budget model, but brands are pushing for improved quality across their tiers since the market now is very competitive.

Calibrating the AOC CU32V3 can reduce the dE average to 1.87, but the difference isn’t readily visible or noticeable for most users. Buying a colorimeter for this option isn’t worth it since the gains are minimal so many will not be able to appreciate them. Users will be happy with minor tweaks to the OSD, so investing more in another gadget isn’t practical.

The AOC CU32V3’s backlight reached a peak of 330 cd/m2 which is plenty for daily use even in areas where there is a lot of lighting. The contrast ratio at 60% brightness hits 2280:1 which is below the specifications but is still considerably better than what IPS and TN monitors can offer. The VA panel showed strong performance in black luminance and saturation, so the screen won’t look washed out or grayish when it is used in the dark.

Panel uniformity for the AOC CU32V3 could be better since there are some light leaks at the top and bottom edges of the display. They aren’t bright or visible enough to ruin most images, but all-black or dark scenes can reveal them to users. This is normal for curved monitors, but there are better units out there that have better consistency in this regard.

One of the weaknesses of the AOC CU32V3 is its limited pixel response time which produces some trails and smudging in fast-paced scenes. Setting the overdrive to its maximum level helps clean it up, but you will get some overshoot in exchange. Gaming-grade variants like the Gigabyte G32QC are substantially better in this regard, but models like it have higher refresh rates.

Another caveat you have to live with if you choose the AOC CU32V3 is it doesn’t support FreeSync or G-Sync Compatibility. VRR is essential for 4K gaming since this is where GPUs are put to the test with regards to how stable their framerates can be. Input lag sits at 12ms at 60Hz which is the fastest but is still reasonably good since delays won’t be noticeable for most users.

Thoughts on the AOC CU32V3

The AOC CU32V3 is an excellent pick if you want an immersive screen with rich colors and contrast at a friendly price point. All of its imaging results are great, so watching movies or playing games will be a good experience. It’s limited feature-wise, but we like its looks and the excellent build quality it possesses for a budget variant.

However, there are some limitations that you might want to consider before buying the AOC CU32V3. It doesn’t support Adaptive Sync for starters while some may consider the lack of ergonomics as a deal-breaker. It’s a superb monitor overall, but it lacks a few creature comforts which consumers are looking for before pulling the trigger.