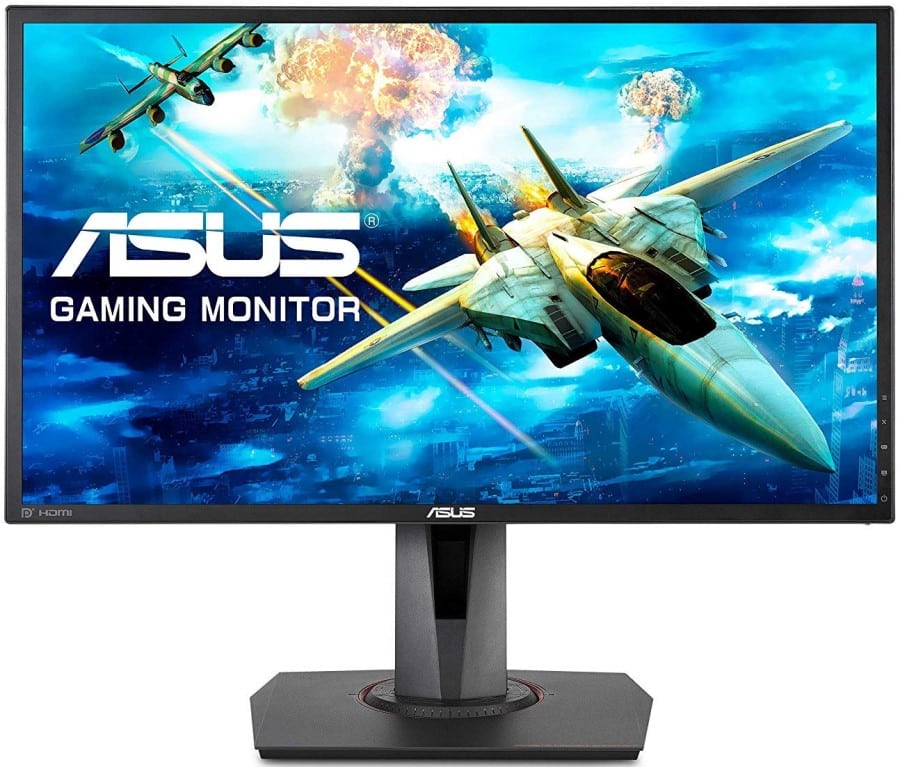 The Asus MG248QR represents the next evolution of the MG248Q which won our editor’s choice a few years ago for its excellent gaming performance. This model offers a popular format, but it’s now facing various competitors, including some from the same brand such as the VG258QR and XG248Q. The Asus MG248QR’s main advantage is its now cheaper, but it’s interesting to see how its stacks up against its more modern brethren. 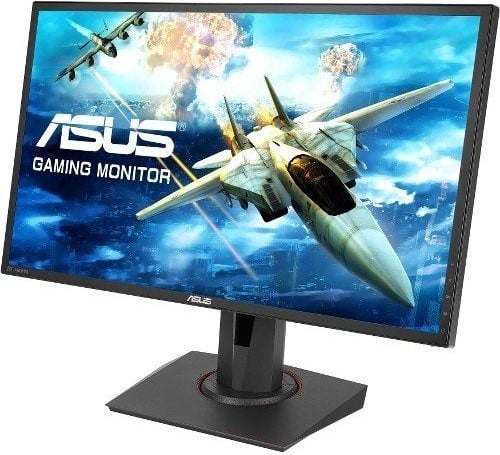 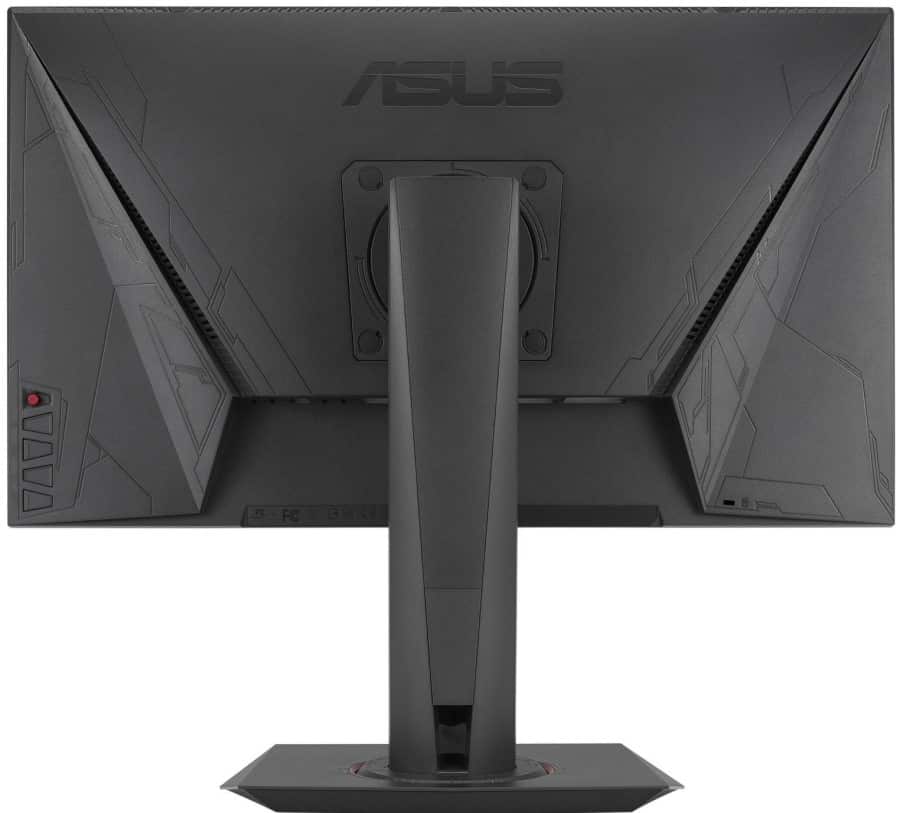 The Asus MG248QR sports the brand’s original ROG aesthetic which we prefer over the newer versions for its simplicity and implied elegance. The chassis is mostly matte black with decent proportions that are made to create a premium appeal. This version isn’t bezel-free, but the plastic borders are thin enough to remain unnoticeable during gaming.

Asus’ products and their corresponding build qualities never waivered with each release. The durability and excellent finish similar to ROG Swift models like the PG278QR are still present in the Asus MG248QR, even if it sits a lower tier. We did not notice any cosmetic defects or creaking from the monitor’s joints, and the whole device stands firm and stable when planted to a desk.

The Asus MG248QR also uses the four-button and OSD joystick combination for its control layout like its higher-tiered siblings. There are dedicated buttons for power, presets, and the brand’s GamePlus overlays, but most of the device’s imaging controls are accessed with the red joystick. Frankly, we always prefer this design for screens that require adjustments regularly since you don’t have to fumble in the dark and annoyingly mispress the wrong button.

The Asus MG248QR ships with a fully adjustable stand that tilts, swivels, pivots, and allows you to adjust the screen height. This characteristic is crucial for gaming monitors, especially TN panels, so the user can set a correct angle for good posture and avoid the poor viewing angles of the screen technology. You can also swap this part out for a VESA mount, but we think that’s entirely unnecessary for this variant. 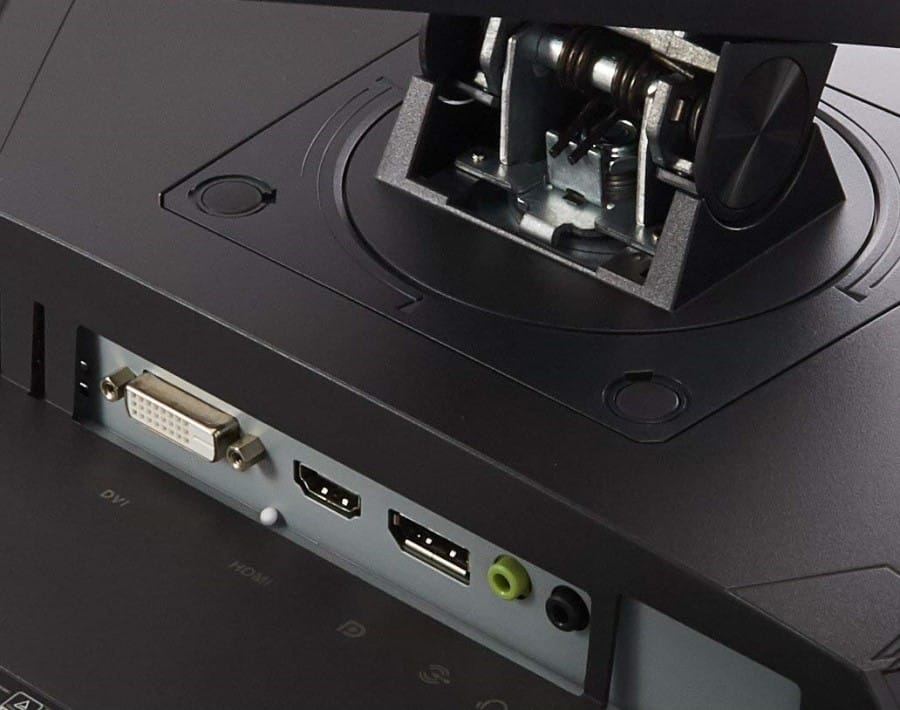 The Asus MG248QR is a FreeSync gaming monitor so it isn’t hardware limited by Nvidia’s implementation, but the connectivity features are rather limited. You only get DisplayPort 1.2, HDMI 1.4, and DVI-DL, along with a 3.5mm jack for audio inputs. Some comparable models offer more inputs, but this is an older design and you won’t need anything beyond what it can offer.

There is also a pair of 2-watt speakers in the Asus MG248QR’s chassis which is nice to have, but highly unsuited for the monitor’s primary purpose. Audio quality starts to distort when you raise the volume, plus it doesn’t have the necessary range for gaming sound effects. You are better off with a headset for competitive gaming, but having the option to put on some background music while idling is nice.

The Asus MG248QR sports a 24-inch TN panel with a 1920 x 1080 resolution, 144 Hz refresh rate, and 1ms response time. The backlight maxes out at 350 cd/m2, while the contrast ratio is the same with most monitors at 1000:1. Newer gaming 1080p displays have comparable specs, except for pumped up backlights which gives the user more room for strobing or adjustments.

The Asus MG248QR’s size and resolution is still the universally accepted format for competitive gaming since its easy to run and comfortable for the eyes. The pixel density is just right, so images are decently sized and crisp. You also don’t need a lot of GPU horsepower to max this product out in many titles, contributing to its high sellability.

Gamut coverage on the Asus MG248QR is excellent since it can reproduce 99% of the sRGB color space. However, accuracy is dismal due to some oversaturation in the primaries, putting the Delta E average at 3.1. Color temperature is biased towards the cooler hue, so some oversaturated shades like yellows look a little off.

Calibrating the display with a colorimeter will correct the inaccuracy, but doing so will drop the gamut coverage to around 93%. Gamma needs a bit of tweaking, but thankfully, Asus monitors include three presets so you can try and set one mode to your liking.

What’s impressive on the Asus MG248QR, however, is its contrast ratio which exceeded 1100:1 in maximum brightness. You lose some if you drop the backlight to a more usable setting, but it doesn’t affect the overall quality drastically. This model produces some of the deepest blacks as far as TN monitors go, so grayish dark scenes are less of a problem.

There is no practically no backlight bleeding on the Asus MG248QR, but the illumination uniformity isn’t as good as we hoped since the lower corner quadrants are dimmer. Some colors and shades are noticeably washed out in these areas if you look close enough. This aspect could change between panel to panel, so make sure you buy from a seller with flexible returns and exchanges terms.

Responsiveness is the Asus MG248QR’s strongest suit in gaming tests since it doesn’t blur or produce ghosting even in fast-paced sequences. If you are extra sensitive and end up finding some persistence, you can use the screen’s included overdrive feature. But be warned that you should use the tool sparingly since setting it too high will add overshoot which is more visible than the latter.

The Asus MG248QR is a FreeSync monitor and it isn’t listed to be G-Sync compatible, but its been tested to work flawlessly with Nvidia’s VRR technology. Input lag at 60Hz is 10ms, so there are no delays or “de-synced” instances when you play your competitive titles.

Thoughts on the Asus MG248QR

The Asus MG248QR is a well-designed and responsive gaming monitor that is fantastic for fast-paced play. We’ve always loved the brand’s older gaming monitor design for its simplicity and functionality, along with the fantastic build quality. It’s also a great selling point that the monitor is G-Sync compatible despite missing Nvidia’s certification requirements.

However, the chink in the Asus MG248QR’s armor is its poor image quality which is difficult to correct. The OSD includes some settings which you can use to alleviate some of the flaws, but calibration is necessary if you want pinpoint accuracy. The device is showing its age in this regard since there are far better options in the market right now.