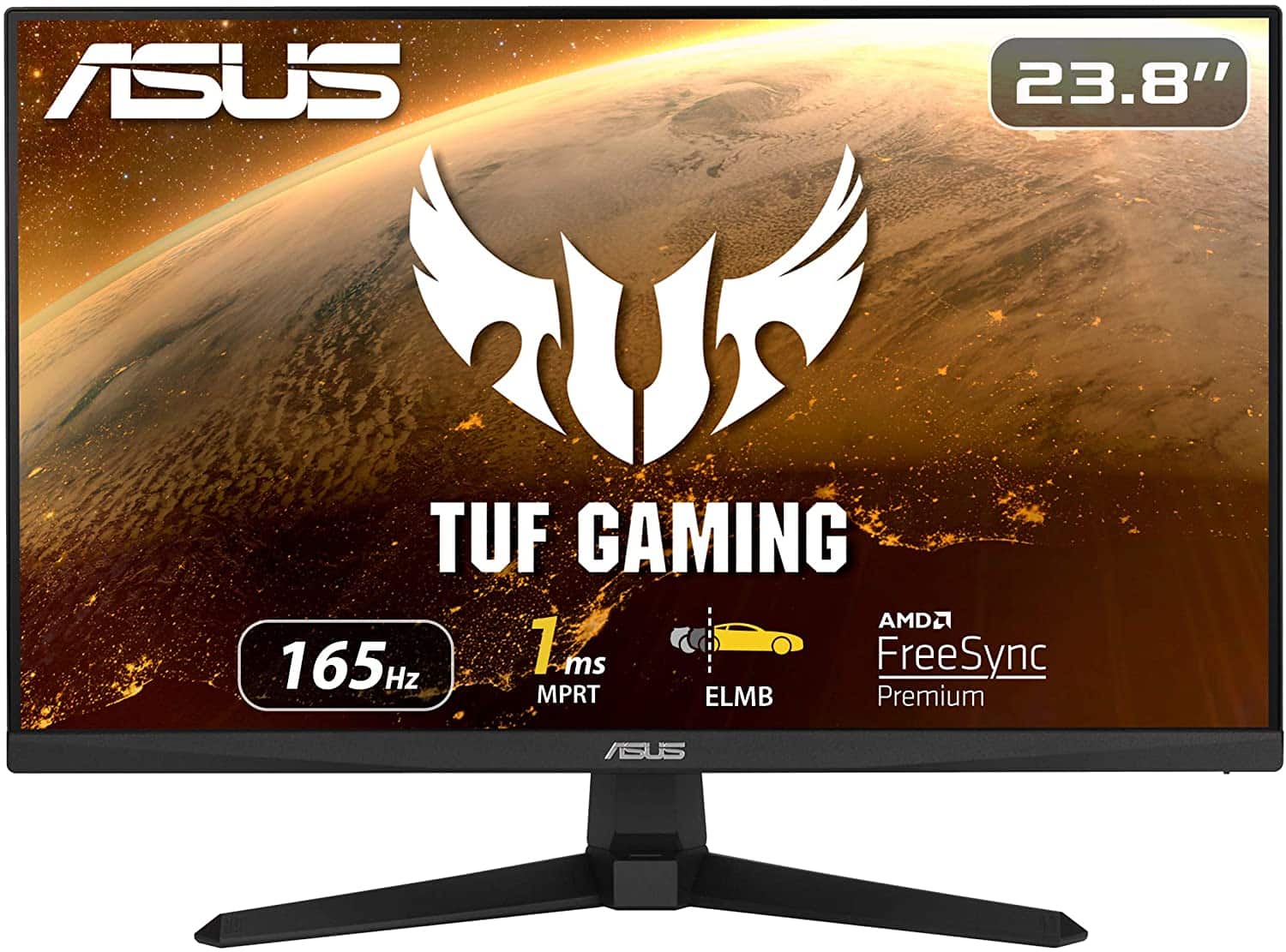 The Asus VG249Q offers a faster 165Hz refresh rate and a clear IPS panel while being more affordable than its predecessor. Monitors like this are popular with aspiring E-Sports athletes since they have the ideal format for competitive gaming and they are very affordable. Let’s see if the Asus VG249Q1A comes out on top of the already saturated 1080p IPS gaming segment. 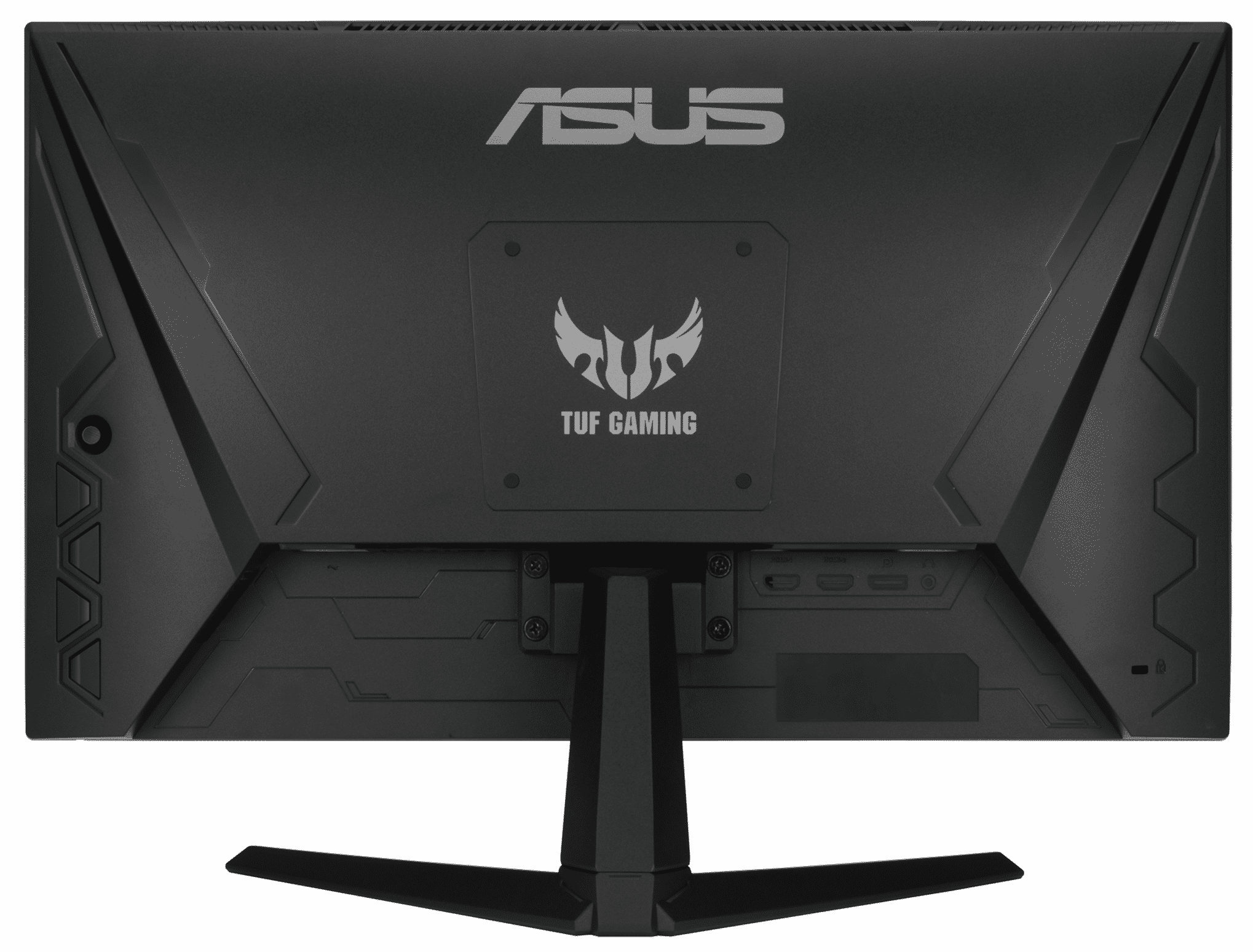 The Asus VG249Q1A doesn’t look too different from its predecessor except for its redesigned stand. The monitor has a matte black chassis so it’s easy to integrate it into most gaming setups. The display is bezel-free on three sides, although you will still see inner borders if you look close enough.

We like how the Asus VG249Q1A reduced its overall footprint on your desk, although it doesn’t come without consequences. The device needs less than seven inches of depth, so it won’t bump off your other peripherals from their spots. It also weighs less at 7.65 pounds, making it portable enough for LAN games with your buddies.

Build quality for this model is decent even if it’s made mostly out of plastic just like other generic monitors. However, the panels used by Asus feel thicker and more durable, so they won’t flex or crack with a reasonable amount of force. The stand isn’t wobbly at all, but it does shake a bit if you accidentally nudge it with your hands.

The Asus VG249Q1A has a control layout that we’re all familiar with since it’s easy and quick to use. The layout includes a joystick that’s accompanied by hotkeys for navigating and swapping between the gaming features. Budget options often use button layouts that are not as user-friendly and often prone to wrong key presses.

The stand included with the Asus VG249Q1A is considered a downgrade when compared to its predecessor. It stands stable, but it only offers tilt for ergonomics unlike the fully adjustable unit on the VG249Q. You can remove it and use a VESA mount instead, but that would add cost so you might as well go with a better-equipped alternative.

The Asus VG249Q1A includes DisplayPort 1.2 and two HDMI 1.4 slots for video inputs, but there are no USB ports. That’s ok since this is a budget gaming monitor, and those add-ons will usually contribute to a higher price anyway. You also get a 3.5mm jack for headphones and a pair of 2-watt speakers for basic audio purposes.

The sound quality isn’t impressive and it’s not ideal for gaming, but it’s always nice to have for basic audio tasks. They can be used for background music or even conference calls which are more common now due to the popularity of work-from-home arrangements. Competitive gaming dictates the need for an accurate headset, but we’ll take what we can get from a value-oriented product.

It’s also worth noting that the Asus VG249Q1A supports 120Hz performance mode on the PS5 and the Xbox Series X. HDMI 2.0 was the bare minimum a while ago, but it looks like Asus sorted it out and improved their firmware for this purpose. This ability extends the monitor’s value since it can be used as a low-cost central display for your PC and the two gaming devices.

The Asus VG249Q1A sports a 24-inch IPS panel with a 1920 x 1080 resolution, a 165Hz refresh rate, and a 1ms MPRT response time. The backlight is limited to 250 cd/m.2 while the contrast ratio is listed at 1000:1 like most IPS monitors. This model doesn’t carry HDR features since it focuses on speed and clarity for E-Sports use.

24-inch 1080p monitors aren’t as sought after now since 1440p and 4K variants have become more accessible. However, it’s still the universal format for competitive gaming, and it’s easy on the eyes for other tasks. Most users won’t need to adjust to it since we’re all used to viewing displays like this in school or at work.

The Asus VG249Q1A renders 97% sRGB which isn’t great, but sufficient for competitive gaming or office use. It also looks like it wasn’t fine-tuned at the factory since the deltaE average sat at 2.97 which is a bit high compared to other results from other Asus monitors. Take note that results might vary between every unit due to the nature of panel technology.

Calibrating the monitor with a colorimeter improved the dE average to a more desirable 1.23. However, it is not practical to get the gadget for the purpose of tweaking this product unless you work in the editing or content creation industry. We recommend trying personal tweaks first to find a favorable setting before going with more drastic solutions.

The Asus VG249Q1A’s backlight managed to reach 290 cd/m2 at 100% while contrast hit as much as 1114:1 at 60% brightness. That’s great coming from an IPS panel, but it is still insufficient when it comes to producing deep blacks. Dark scenes can still look washed out, especially when it’s used at night.

Panel uniformity for the Asus VG249Q1A could use some improvements since there were some backlight leaks on the upper edges of the screen. All-black images also revealed considerable clouding which affects contrast. Thankfully, this isn’t permanent for the entire range, so there are better units out there.

The main strength of the Asus VG249Q1A is its motion handling and pixel response time which makes it great for fast-paced games. Blurring is minimal, and it becomes unnoticeable if you set the Trace-Free setting to 40. However, we don’t recommend going any higher since going beyond 40 will induce visible overshoot in some instances.

The Asus VG249Q1A is compatible with both FreeSync and G-Sync, but it only works via its DisplayPort 1.2 slot. This duality is nice to have since you are basically free to choose whichever GPU brand you like unlike before. Input lag sits at a healthy 4ms at 165Hz, so there is no need to worry about delays while engaging in tournaments or scrims with your mates.

Thoughts on the Asus VG249Q1A

The Asus VG249Q1A is a decent choice if you want an inexpensive gaming monitor that offers smooth motion handling and low input lag. It is not the most vibrant or accurate in its segment, but that matters less in games like CSGO or Warzone. We like that it’s readily compatible with the Xbox Series X and PS5’s 120Hz performance mode so it can be used as a multi-platform display.

However, that low price also means that there will be some omissions or penalties to the product. The adjustable stand on the older variant is better, while the panel itself could use some factory tweaking to enhance its output. It is not a bad monitor, but cheaper options like the AOC 24G2 have more to offer.