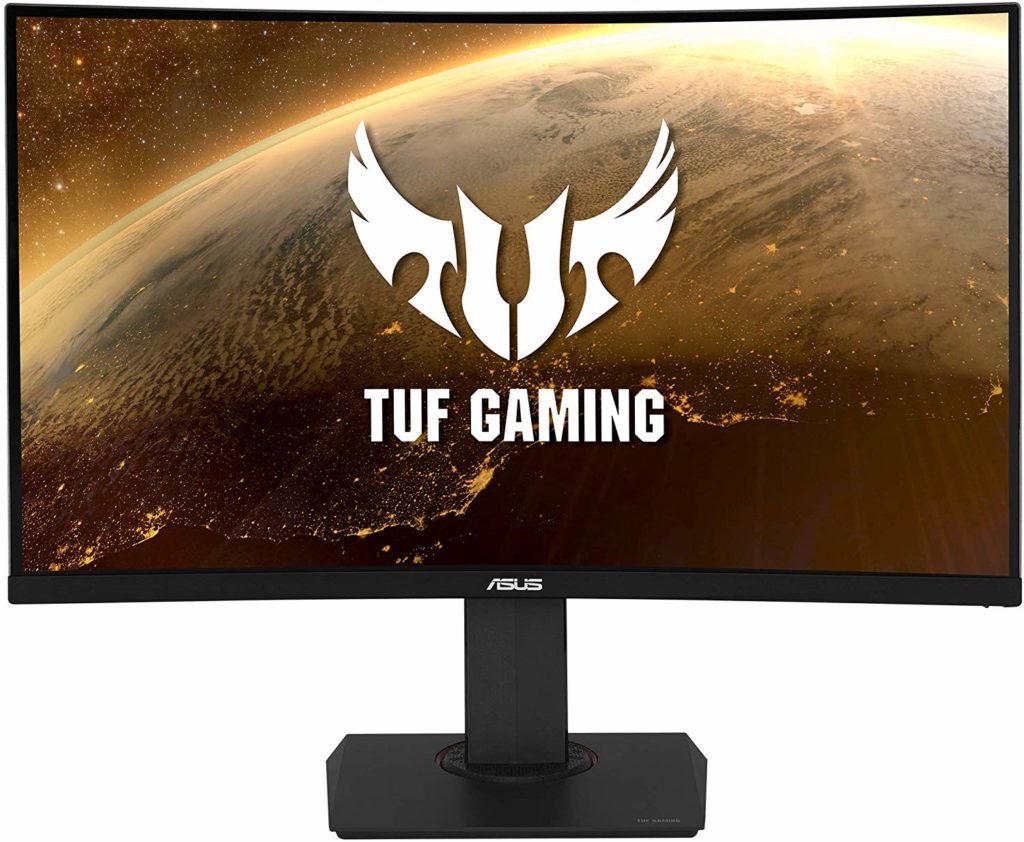 The Asus VG32VQ attempts at combining both immersive and competitive-grade features into a well-designed and reasonably-priced package. This model features a curved VA panel for excellent immersion while having Asus’ proprietary ELMB feature which doesn’t lock out FreeSync or G-Sync compatibility. There are plenty of 32-inch 144Hz options already in the market, so let’s see if the Asus VG32VQ can compete or even dominate its segment. 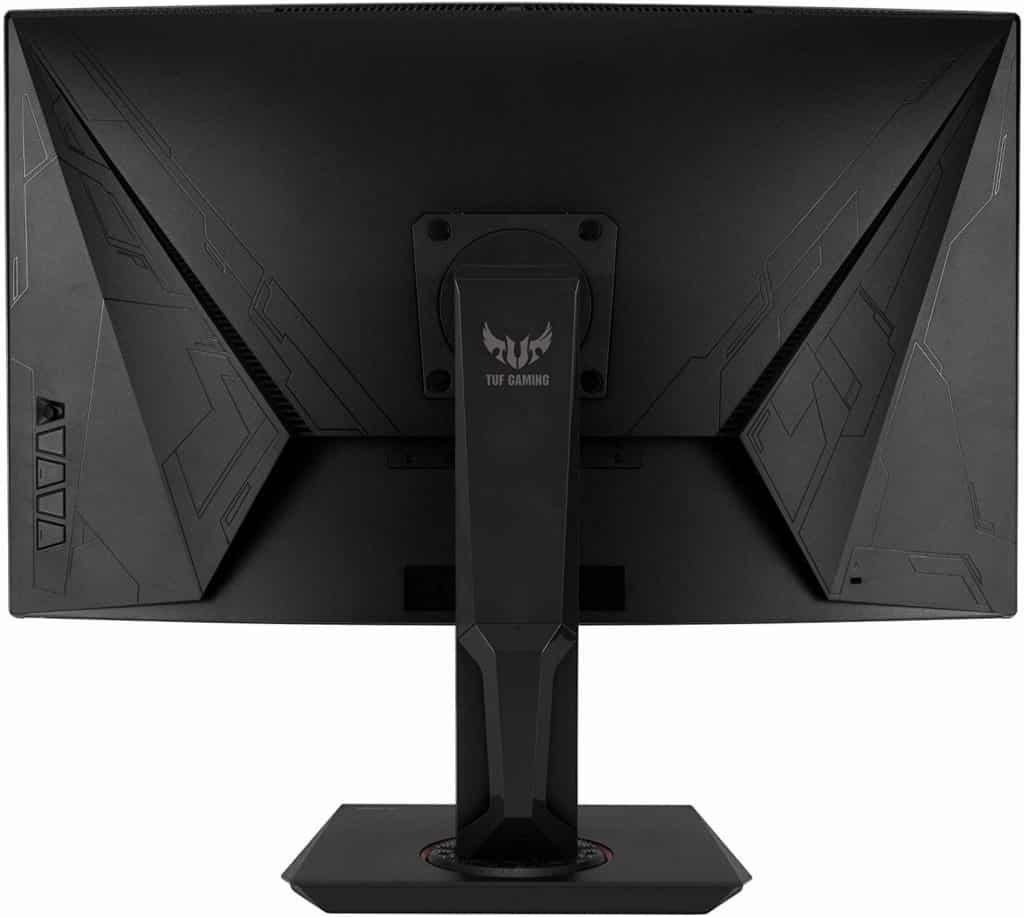 The Asus VG32VQ belongs with the TUF line of gaming monitors that uses the same design as many of the brand’s older models like the Asus PG278QR. Of course, the ROG logos are swapped with the newer TUF branding and the chassis curves with the display, but its more or less the same. We think that’s a good thing since the matte black color has always worked, and with the bezel off on three sides, it looks even better.

This characteristic makes the Asus VG32VQ ideal for multimonitor setups, but you have to consider how much desk space you have. The 1800r curve radius is perfect if you want to create a wrap-around setup that will envelop your visual senses. However, the device consumes a little over nine inches of depth, but the most worrying of all is you will need around seven feet of horizontal space for three VG32VQs.

Build quality is excellent so the product rightfully belongs in the TUF lineup which embodies durability and reliability. The plastics used do not feel cheap or thin, while the mechanisms are smooth and firm enough to keep its position that you’ve set. There is no wobble or loose connection once assembled, so you can be confident that the Asus VG32VQ won’t fall or topple over.

You will still find OSD buttons on the Asus VG32VQ, but they are used as hotkeys for the monitor’s features. There is a dedicated joystick at the rear which lets you navigate the menus swiftly and conveniently, so you don’t have to memorize some keystrokes.

The stand on the Asus VG32VQ has a few aesthetic redesigns such as glossy accents, but its basically the same with most of what Asus monitors have. The mechanism offers tilt, swivel, and height adjustments, so you can correctly position the display for your seating position. The monitor is also VESA compatible, so you can use an aftermarket mount which we think is necessary if you want to go triple.

The Asus VG32VQ’s connectivity options have been reduced, but still carries everything you will need. The panel at the rear includes a DisplayPort 1.2 as the primary, along with two HDMI 2.0 connectors for your secondary machines such as a gaming console. The package also includes built-in speakers, but they are limited to two watts of power so they aren’t suitable for gaming.

The Asus VG32VQ sports a 32-inch 1800r curved VA panel with a 2560 x 1440 resolution, 144Hz refresh rate, and a 1ms MPRT refresh rate made possible with ELMB. The contrast ratio is rated at a maximum of 3000:1, while the backlight tops out at 400 cd/m2. The monitor is certified with VESA’s DisplayHDR 400 certification, but we all know by now that its more of a marketing gimmick rather than a feature you should consider.

The pixel density of the Asus VG32VQ is more or less comparable to a regular 24-inch 1080p monitor, so many will be comfortable with it. You won’t need scaling, but pixelation and image softening aren’t critical issues since there are still more pixels in a QHD screen. Game features like Anti Aliasing aren’t immediately necessary, but games with lower resolution textures might need it.

The Asus VG32VQ doesn’t do well in color rendering like its IPS sibling, the VG27AQ which doesn’t require calibration right away. This model only covers 93% of the sRGB gamut with a dismal accuracy of Delta E 3.6. The color temperature is too cool for our taste, so tweaking is a necessity if you buy this product.

Thankfully, it’s easy to correct the Asus VG32VQ’s image output with a few clicks to the RGB sliders and reducing its default brightness. Doing so will improve colors to a DeltaE of only 1.2, resulting in a more balanced temperature and overall appearance. It’s also crucial to use lower brightness settings, especially if you want to reach the peak contrast of around 2900:1.

Gamma, on the other hand, remained almost the same between the default and calibrated state. Blacks become deep and profound, while color separation becomes well-defined and without bleeding. The monitor’s HDR capabilities don’t do much in enhancing the image, so we don’t recommend buying this display for that reason.

The Asus VG32VQ test unit notably suffered from backlight leaks at the top and bottom quadrants. This flaw induced noticeable clouding and shifts in contrast, but it only starts to become visible with extremely dark images. This aspect will vary between unit to unit, so we encourage you to buy from a seller that readily accepts returns and exchanges.

What’s fantastic about the Asus VG32VQ is its excellent motion handling which is noticeably faster than many VA monitors of the same grade. Setting the device’s Trace Free setting to its 100 level almost perfectly cleans images in fast-paced sequences, save for a few trails that most will barely notice. You can improve this further with the monitor’s ELMB if you still see artifacts without worrying about brightness or VRR settings being locked out.

The Asus VG32VQ is a FreeSync gaming monitor that’s also compatible with Nvidia’s VRR solution. It’s great that you can use adaptive sync with the monitor’s ELMB, but be aware that the strobe becomes noticeable if your FPS drops too low. Input lag sits at 6ms at 144Hz, so there will be no delays or “de-synced” instances during competitive play.

Thoughts on the Asus VG32VQ

The Asus VG32VQ is an excellent option as far as curved VA monitors go due to its superb blur reduction capabilities and FreeSync/G-Sync compatibility. The image quality requires a ton of improvement from its default state, but thankfully, the errors are easy to deal with even if you don’t have a colorimeter. This model is great for racing sims and the like due to these qualities, but it is also suitable for competitive titles like Apex Legends due to its speed.

But on the other hand, we do hope that the backlight bleeding issue doesn’t persist across the range since it drastically affects the fidelity of the Asus VG32VQ’s output. We also think that Asus could have included more physical features considering the price. This model isn’t perfect, but buying it for its ELMB feature, VRR compatibility, and design is a good choice.