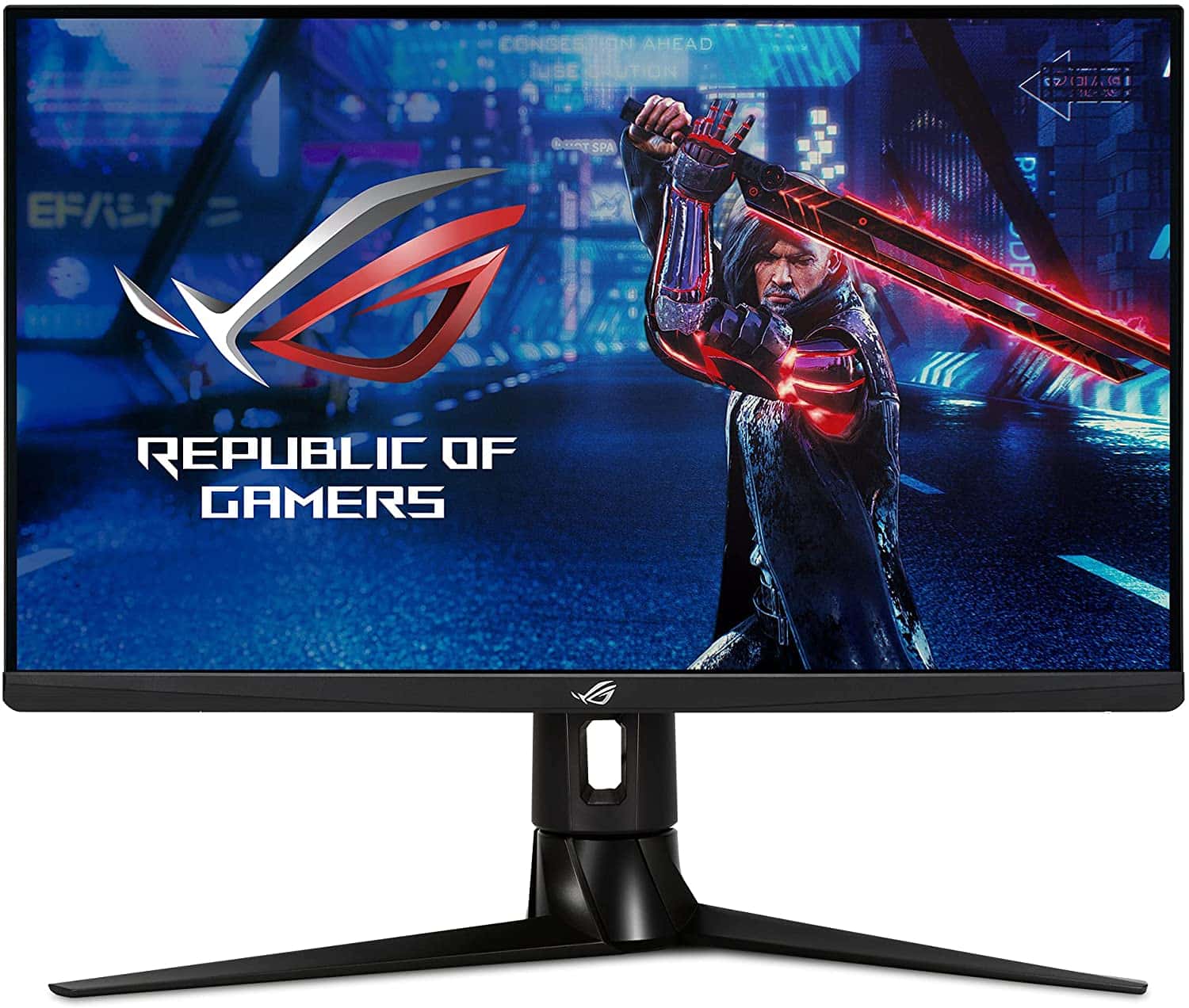 The Asus XG27AQM offers supreme speed and clarity in a premium package that personifies the ROG lifestyle and design. This model belongs to the Strix line up which is a tier higher than the TUF Gaming category where models like the Asus VG27AQL1A belong. Let’s check and see if the extra cash the ROG eye logo requires is worth the investment versus the practicality of its non-RGB siblings. 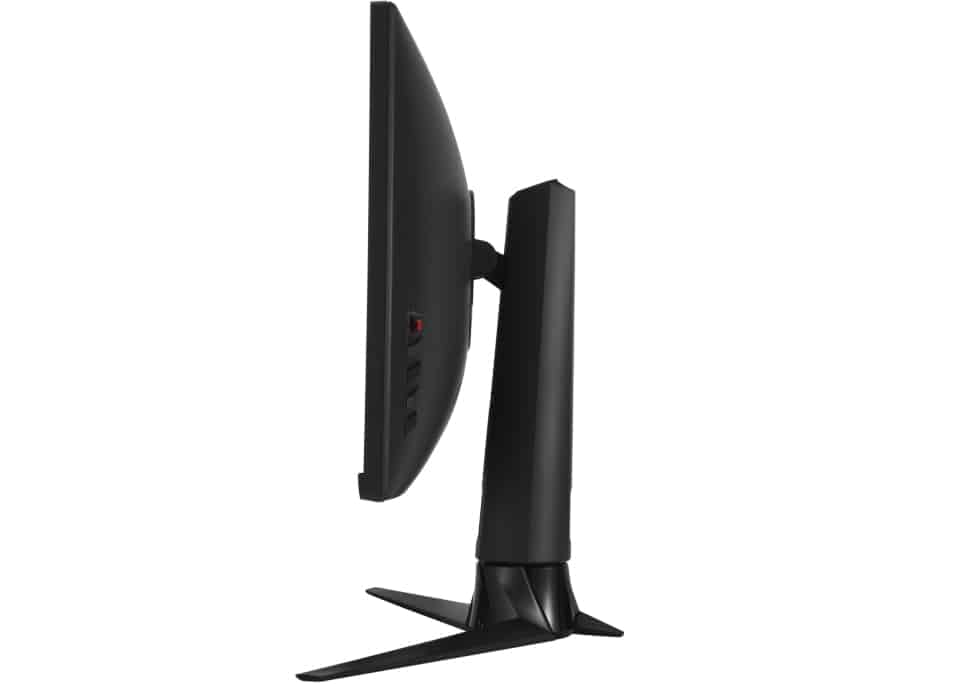 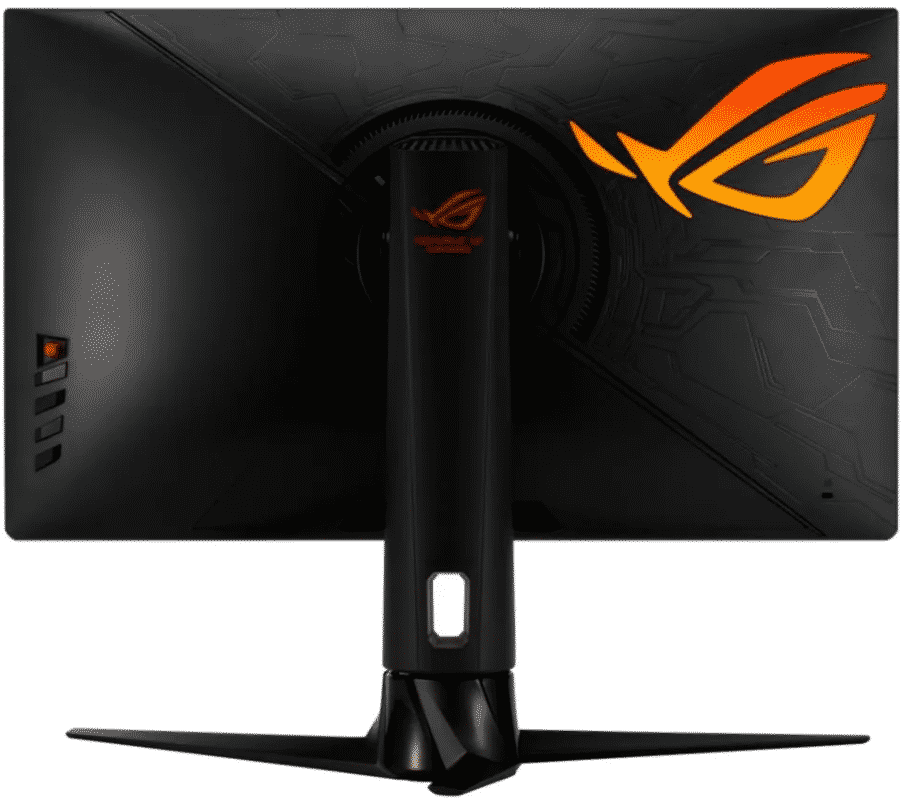 The Asus XG27AQM has a distinct Strix design that’s eye-catching yet more subdued than the ROG Swift variants which have orange accents. The monitor has a matte black aesthetic all over, and the only splash of color you can get from it is via its RGB LED at the back. The display is bezel-free on three sides so the screen looks clean and more attractive for multimonitor use.

ROG monitors are known to be chunkier than their competitors, but that should be okay for standard desk sizes. This model needs a little over ten inches of depth due to its well-built and very supportive stand. It is heavier than some options, but assembly and setup should be easy for most users without needing extra hands.

The Asus XG27AQM is built like a tank so it should last quite a while as long as you don’t abuse it. The plastic panels are thick and sturdy, and it doesn’t seem like they will crack or flex with moderate force. The included stand is very firm and solid, so you don’t have to worry about sagging or wobbling while you are enjoying your favorite games.

The monitor has a ROG eye logo at the back which works with Asus’ Aura RGB ecosystem. It’s nice to be able to control the colors and themes especially if you have other ROG gear which can be synced entirely. However, the position of the LEDs to the side of the monitor’s back is awkward, so it’s not effective as a bias lighting solution.

The OSD controls found on Asus gaming monitors remain unchanged on this model, but that isn’t necessarily a bad thing. You will find a red joystick at the back that’s followed by hotkeys for easy access to the monitor’s other features such as its overlays. Other premium models have implemented special ways to access the OSD, but frankly, this layout is already easy to use.

The stand included with the Asus XG27AQM offers tilt, swivel, pivot, and height adjustments for your convenience. It is easy to get a preferred view angle, plus the swivel joints are firm enough to hold the position you’ve set almost permanently. You can use VESA mounts with this model, but it’s unnecessary unless you want to save space or if you have a multi-monitor setup.

The Asus XG27AQM includes DisplayPort 1.4 and two HDMI 2.0 ports for video inputs, along with three USB 3.0 ports and a 3.5mm jack for your accessories. That’s all you will ever need to be honest, but a premium model should always offer more than its lower-tiered siblings. What’s sorely lacking here is a USB-C slot which you will find on its main competitor the Acer XB273UGX, but it’s slightly pricier so it still balances out.

Another thing missing from the Asus XG27AQM is a pair of upgraded speakers which should be standard for its tier. Most gamers will not miss them, but other brands offer this feature with better specs at the right price. They can be used if it’s too hot for headsets or if you simply want to sit back, relax, and watch videos or movies.

The Asus XG27AQM sports a 27-inch Fast IPS panel with a 2560 x 1440 resolution, a 270Hz overclocked refresh rate, and a 0.5ms boosted response time. The backlight has a typical output of 350 cd/m2 while the contrast ratio is listed at 1000:1 like most IPS panels. This model is certified for HDR 400, but we all know that it doesn’t mean that you will get an upgraded HDR performance out of it.

27-inch monitors are your best bet if you want to upgrade the sharpness of your screen without delving into the expensive world of 4K. It’s sharp and it offers more room, plus it doesn’t take a lot to run most games at higher refresh rates. It is not as demanding as 4K screens, but you will need a flagship card if you want to consistently reach the 270Hz ceiling in modern titles.

The Asus XG27AQM renders 100% sRGB and 95% of DCI-P3 for stunning color in games and movies. However, its default accuracy isn’t as impressive since the deltaE average was too high with an average of 3.21. The screen isn’t factory-calibrated like the XB273UGX, but it is not going to be a big issue if you only plan to use it for gaming.

Calibrating it with a colorimeter revealed the true quality of the Asus XG27AQM since it reduced the dE average to 0.45. This is a common occurrence with the new IPS models, but it still doesn’t mean that you should buy a colorimeter if you are only gaming. We recommend trying the OSD out manually first to find a setting that looks correct to you before spending more money.

The Asus XG27AQM’s backlight reached 358 cd/m2 in SDR and 405 cd/m2 when HDR is active. It can fight off glare in well-lit rooms so you don’t have to settle with a dim screen during daytime gaming. However, its contrast is limited to 987:1 at 60% brightness so it’s still unable to produce deep blacks like other IPS monitors with special backlights.

Panel uniformity for the Asus XG27AQM was great overall since there were no considerable backlight leaks or clouding issues on its edges. There is some variance in the backlight at the bottom of the screen, but it only becomes slightly noticeable in select instances. Take note that this can vary between every monitor due to the nature of IPS, so there are better and worse units out there.

Responsiveness is the main strength of the Asus XG27AQM and its extra-high 270Hz refresh rate. You only need to set its overdrive to its middle level to enjoy a blur-free experience. It also has an ELMB or strobing feature which doesn’t lock out its Adaptive Sync, but we think it’s only necessary for extreme circumstances.

The Asus XG27AQM is compatible with both FreeSync and G-Sync so finding a suitable GPU will not be a problem. Both brands have ideal cards for this monitor, so it is nice to have the freedom to choose in today’s unstable video card market. Input lag sits at 2.5ms at 270Hz, making this monitor one of the fastest 1440p variants available.

Thoughts on the Asus XG27AQM

The Asus XG27AQM is an excellent gaming monitor with the right design and features to help you maximize your competitive experience. It’s crazy fast and it is vibrant, so games will look smooth and eye-popping all the time. The overall aesthetic isn’t always a hit, but its solid build and reliable materials will ensure that it lasts quite a while.

There are some caveats with the Asus XG27AQM starting with its lack of creature comforts compared to its competitors. It’s also inaccurate out of the box, unlike many other high-end variants we’ve seen from the brand. However, it is still an excellent gaming monitor overall, especially if you like fast-paced games that rely on blur-free monitors.

Search
NEW
POPULAR
You are here: Home / Reviews / Asus XG27AQM Review – Premium 270Hz 1440p Gaming Monitor – Recommended
This website uses cookies to improve your experience. We'll assume you're ok with this, but you can opt-out if you wish.Accept Read More
Privacy & Cookies Policy