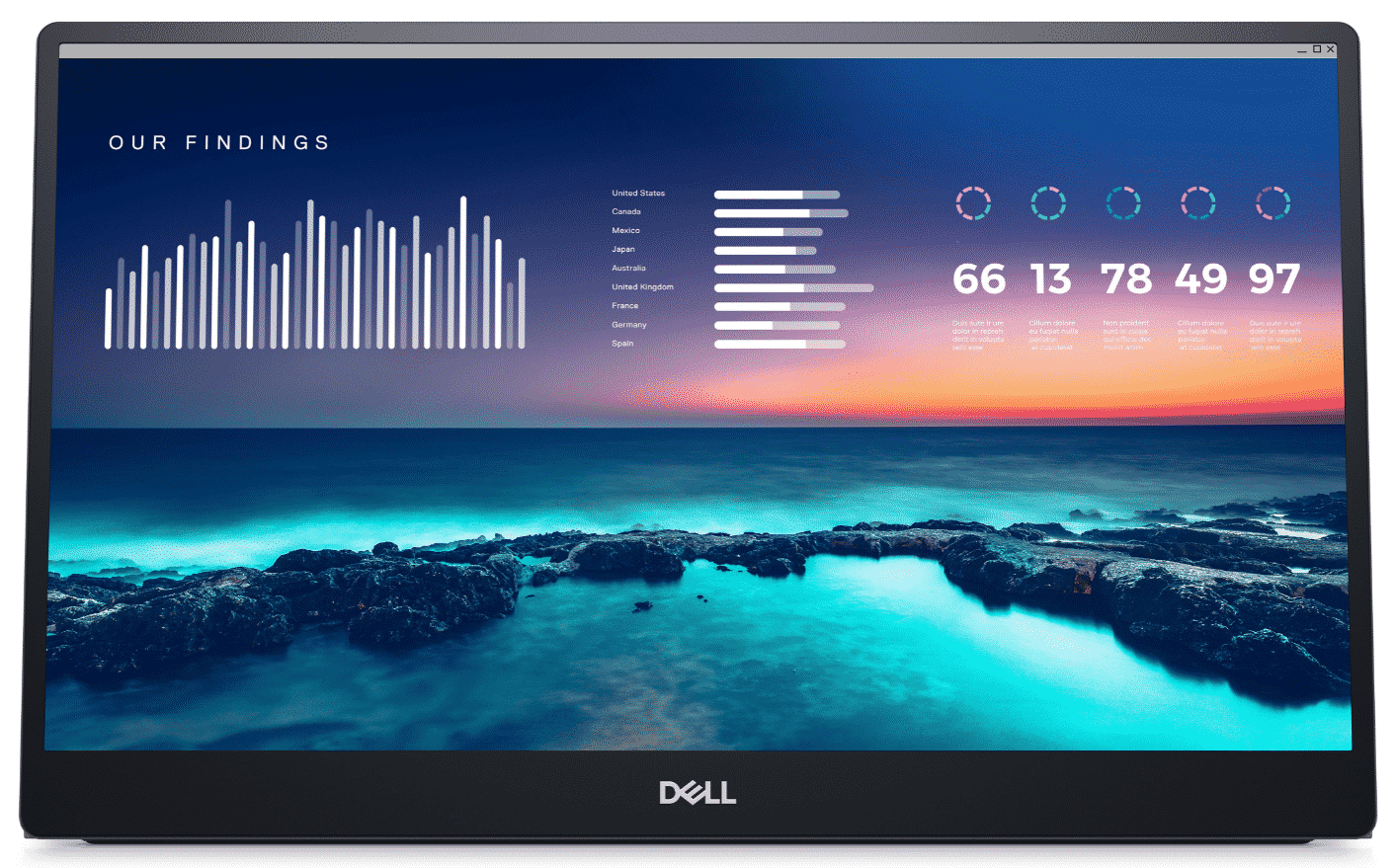 The Dell C1422H is the brand’s first attempt at portable monitors, and it plans to compete using great design and functionality. it’s a compact 14-inch portable designed with convenient features like USB-C and a built-in stand. Let’s see how the Dell C1422H competes against top picks and if it should be your next travel companion. 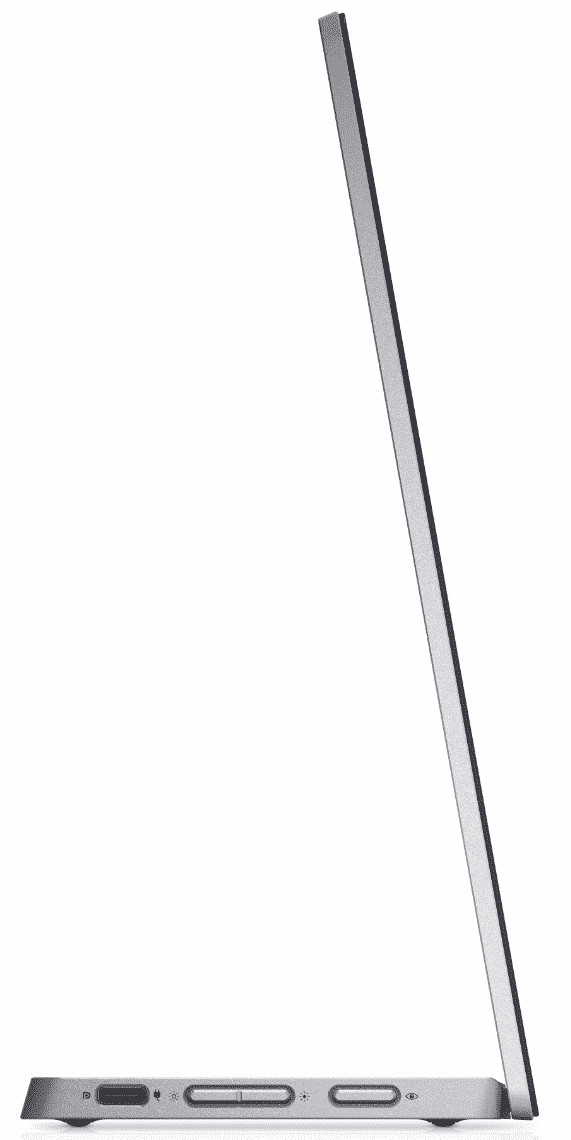 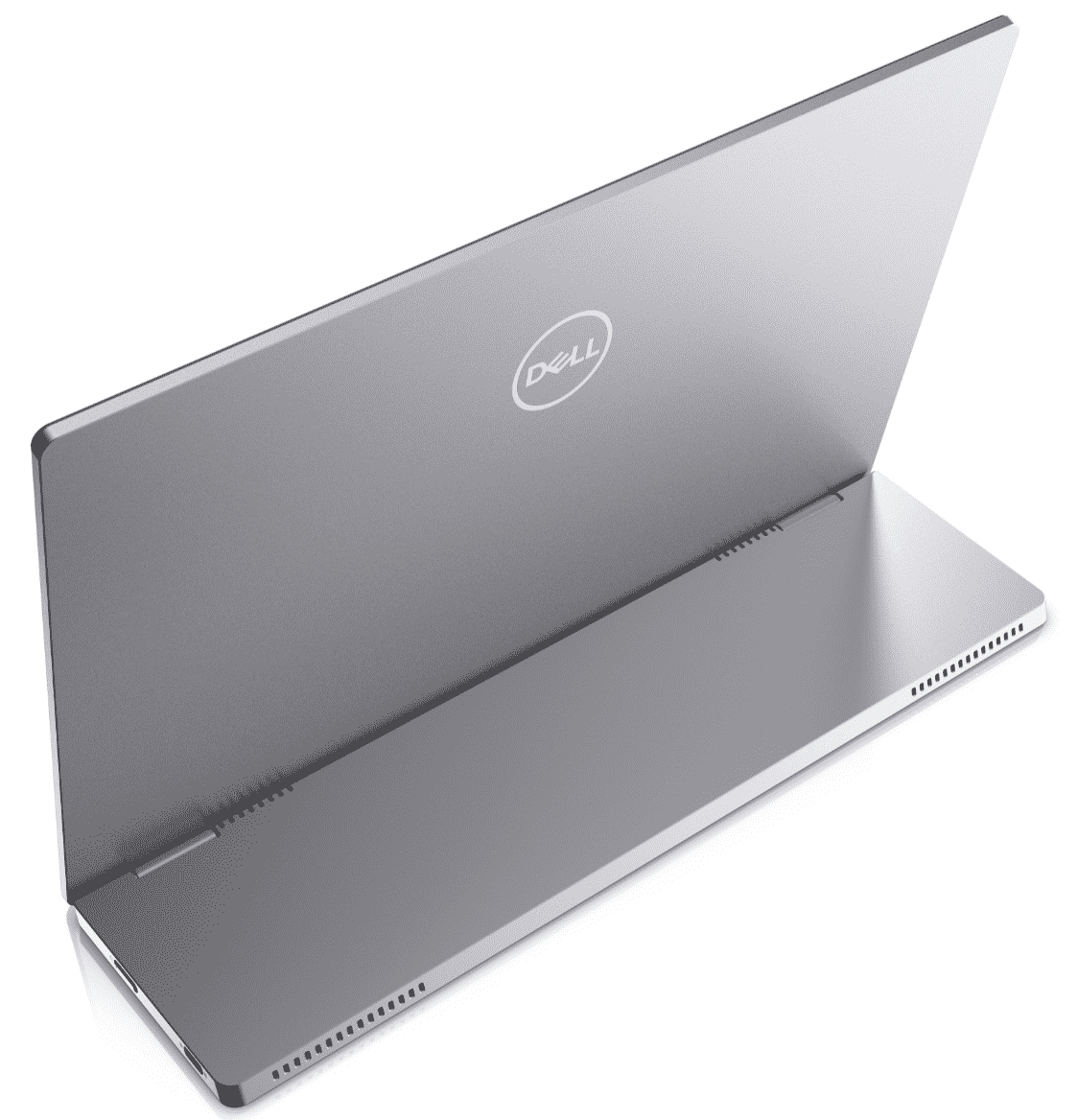 The Dell C1422H sports a minimalist aesthetic that wouldn’t look out of place beside the most premium workstation laptops. It has a matte silver shell which makes it look expensive, although its frontal plastic parts have a matte black finish. It isn’t bezel-free like many of the XPS laptops available, but the borders are thin enough on three sides to be unnoticeable.

The way the Dell C1422H also has a disadvantage since it makes the portable display thicker when folded and stowed. It also is a bit heavier, but that only matters to weight weenies who want the latest load in their packs as possible. Don’t worry though since it will still fit snugly into most laptop bags since it’s more or less as big as a notebook.

Build quality for the Dell C1422H is great even if its dimensions make it look fragile and easy to break. The chassis doesn’t flex and it doesn’t seem like it will crack, and it didn’t show any cosmetic defects when unboxed.  The built-in stand works great so it won’t droop or slide like those models with folding flip covers that are flimsy as hell. 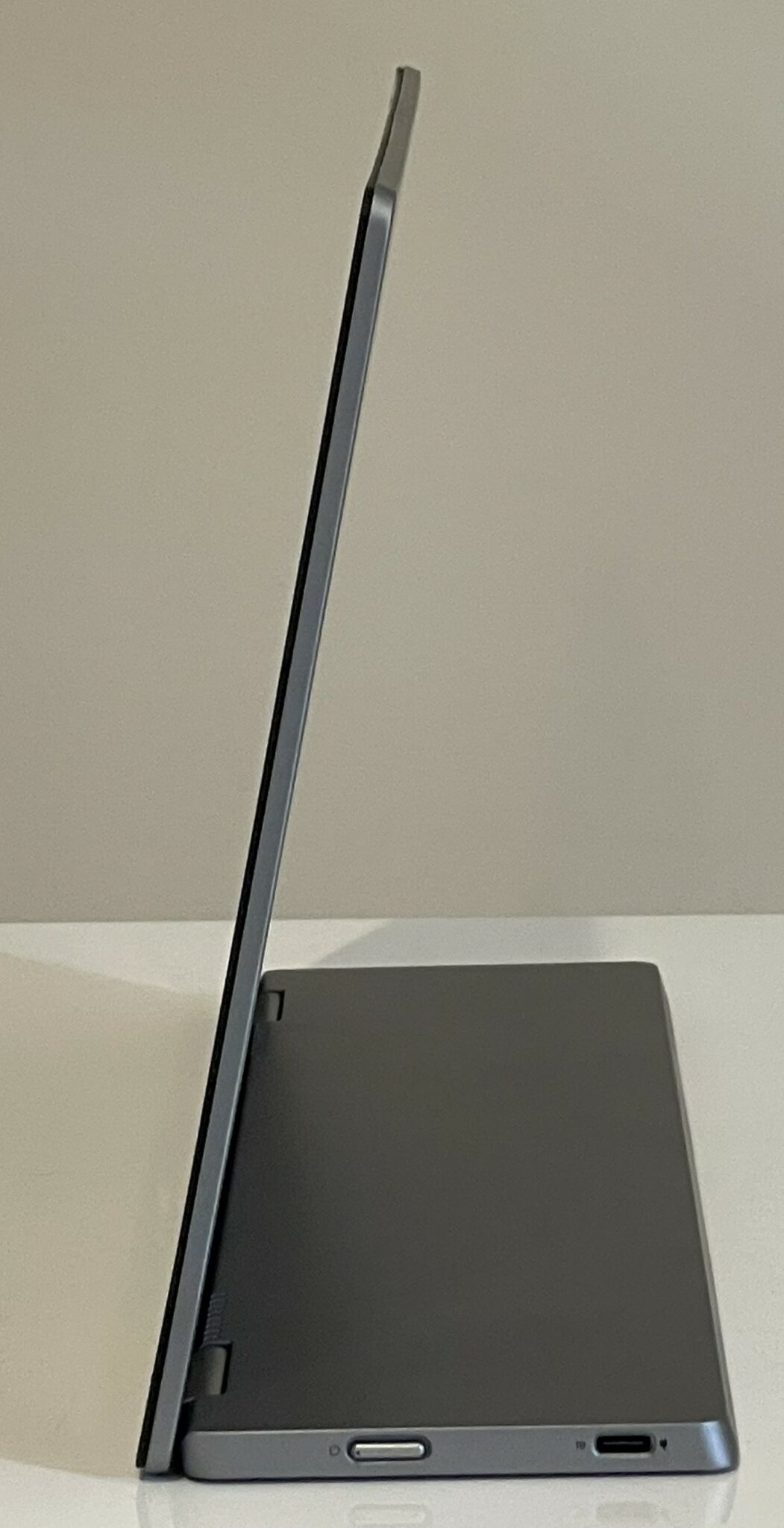 The built-in kickstand of the monitor is probably its best feature since it works quite well compared to the alternatives. You can use it to prop the monitor up in landscape or portrait mode, enhancing the product’s usability. It also has all of the monitor’s controls and ports so cables don’t hang out from the side and you don’t have to pick it up to access its OSD. 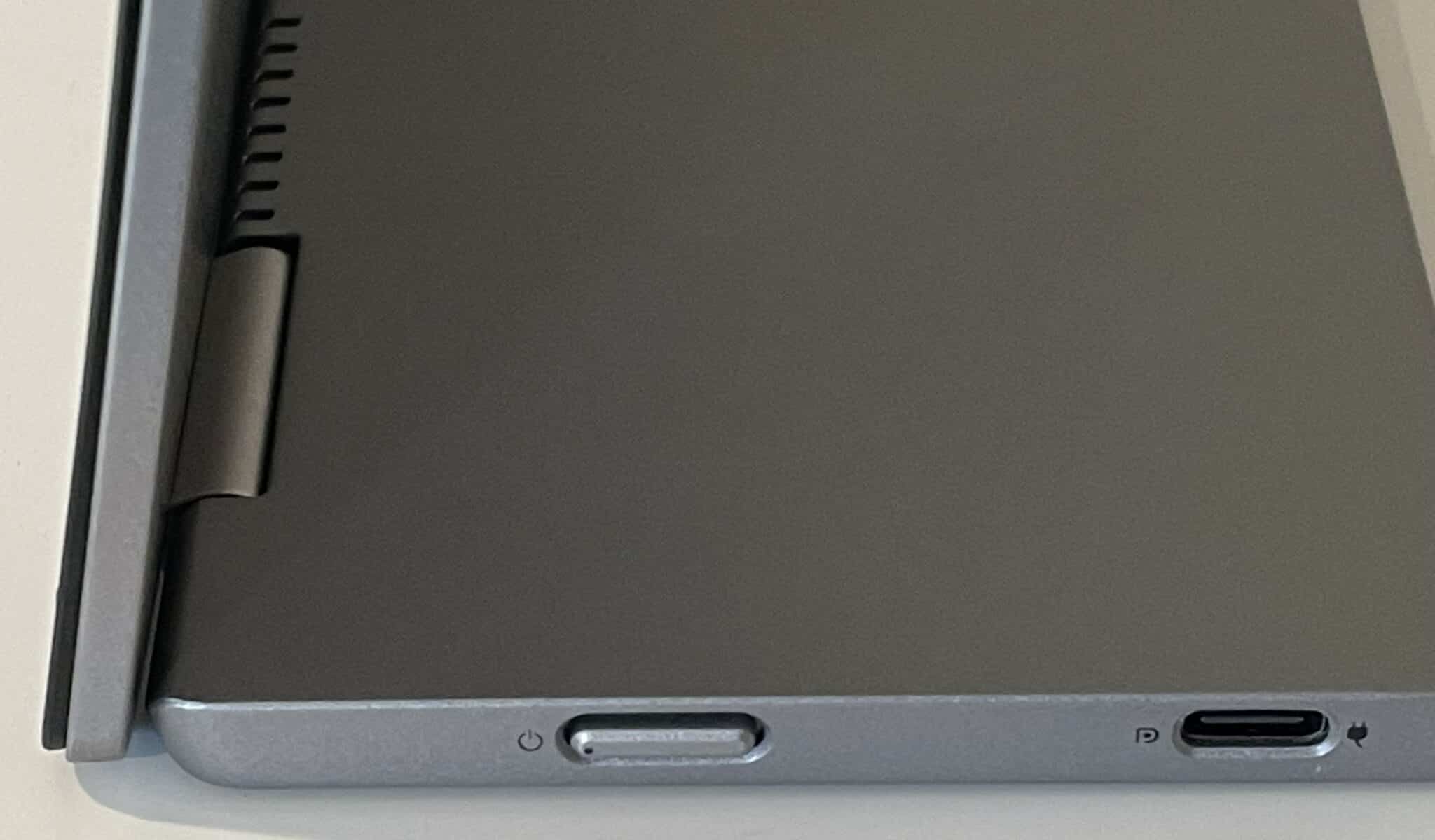 The Dell C1422H has OSD buttons, but it’s excusable this time around since a joystick would probably make it unnecessarily thicker. You also get a hotkey for the brightness setting, which to be honest, is the only setting that matters with portable monitors. You also get a dedicated power button so you can control the screen when it’s in use or not without depending on your laptop.

Another outstanding feature of the Dell C1422H is it uses USB-C which enhances its versatility all around. Both ports can be used as video inputs since they support DP Alt Mode and they can alternatively be used as power inputs. The monitor supports power passthrough so you don’t have to deal with more cables while working on the go.

One disadvantage of the Dell C1422H compared to the Lenovo M14T is it doesn’t include speakers in the chassis. However, we think it’s fair since tiny cans will sound weak guaranteed, so most will be better off using their laptop speakers or a decent pair of headphones. Adding it will also add weight, defeating the notion of maximized portability.

The Dell C1422H includes a 14-inch IPS panel with a 1920 x 1080 resolution, 60Hz refresh rate, and a 6ms response time. The backlight has a 300 cd/m2 brightness while the contrast ratio is listed at 700:1 like many portable displays. This model was not designed for entertainment purposes, but its goal is to broaden your workspace without encumbering you with more weight and a bounty of necessary cables. 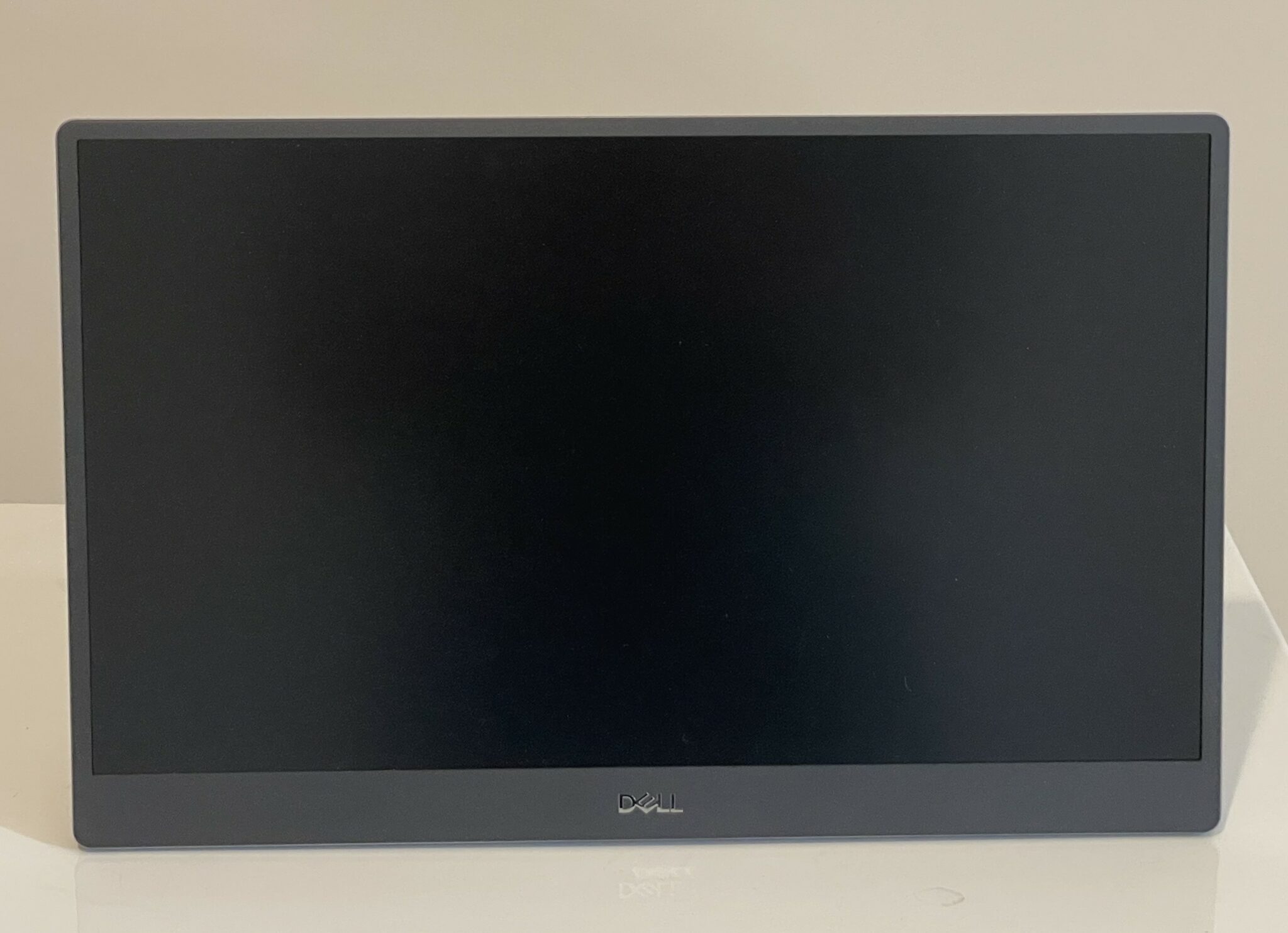 Crispness won’t be an issue with this monitor even if it’s only 1080p since it is sized quite close to most laptop screens. Reading text and documents will still be pleasant without any eye strain, while games and movies look clear and detailed. it’s not comparable to higher resolution displays in extra space, but that’s the predicament this product will solve.

The Dell C1422H renders 99% sRGB which is higher than what most portable monitors can offer by default. Its default accuracy isn’t perfect, but its deltaE average of 2.76 makes it one of the better options out there. There is no need to calibrate the monitor, plus you have your laptop’s screen if you need better color consistency.

Its backlight like many portable displays missed the mark since it only managed to reach 268 cd/m2 at 100% brightness. That’s fine for most uses, but some users might struggle with visibility when it’s used outdoors. Its contrast isn’t particularly impressive as well since it only managed 765:1 at 100% brightness, but that’s expected right away if you read its specification sheet.

Panel uniformity for the Dell C1422H is excellent since there are no backlight leaks on the test unit. The screen looked even in both regular and dark scenes, and there are no signs of clouding issues while it’s in use. The only issue with it is its poor black luminance which can make nighttime scenes appear washed out or grayish.

The Dell C1422H’s pixel response time wasn’t tuned for gaming, so it is understandable that it’s prone to persistence and smudging. Some trails can become visible in contrasting or rapid transitions as a result of this limitation. It is still usable for casual gaming, but it being limited to USB-C will be a bigger hindrance for those who own portable platforms.

The Dell C1422H also doesn’t support Adaptive Sync, so naturally, FreeSync and G-Sync functionality are out of the question. That’s again, understandable since this model was meant as an assistive tool for productivity and business use. We couldn’t measure its input lag, but it’s comparable to the 10ms 60Hz monitors we’ve reviewed previously.

Thoughts on the Dell C1422H

The Dell C1422H is an excellent pick if you want a premium portable monitor with rich colors and superb design. Its IPS panel is far more vibrant than other options like the Asus MB16AMT, plus it doesn’t rely on a flimsy stand. Its USB-C exclusivity is a welcome upgrade for those with modern laptops, but that also means you need a newer machine and you can’t use it for gaming.

The biggest caveat of the Dell C1422H aside from its expected limitations is its price which sits at $349.99 at release. Its competitors can be had for much less if you are willing to sacrifice the built-in stand. However, we’d pay the premium for convenience sake, especially if you are going to use it a lot while working on the go.