The Dell U2422H is a pricey 1080p IPS monitor for professionals who want a vibrant screen and premium features found on flagship models. It’s the more affordable variant of the U2422HE which is intended as a docking monitor with its 90-watt USB-C slot and KVM functionality. Let’s see how the Dell U2422H compares to the rest of the 2022 UltraSharp monitors and if it’s worth its hefty price tag. 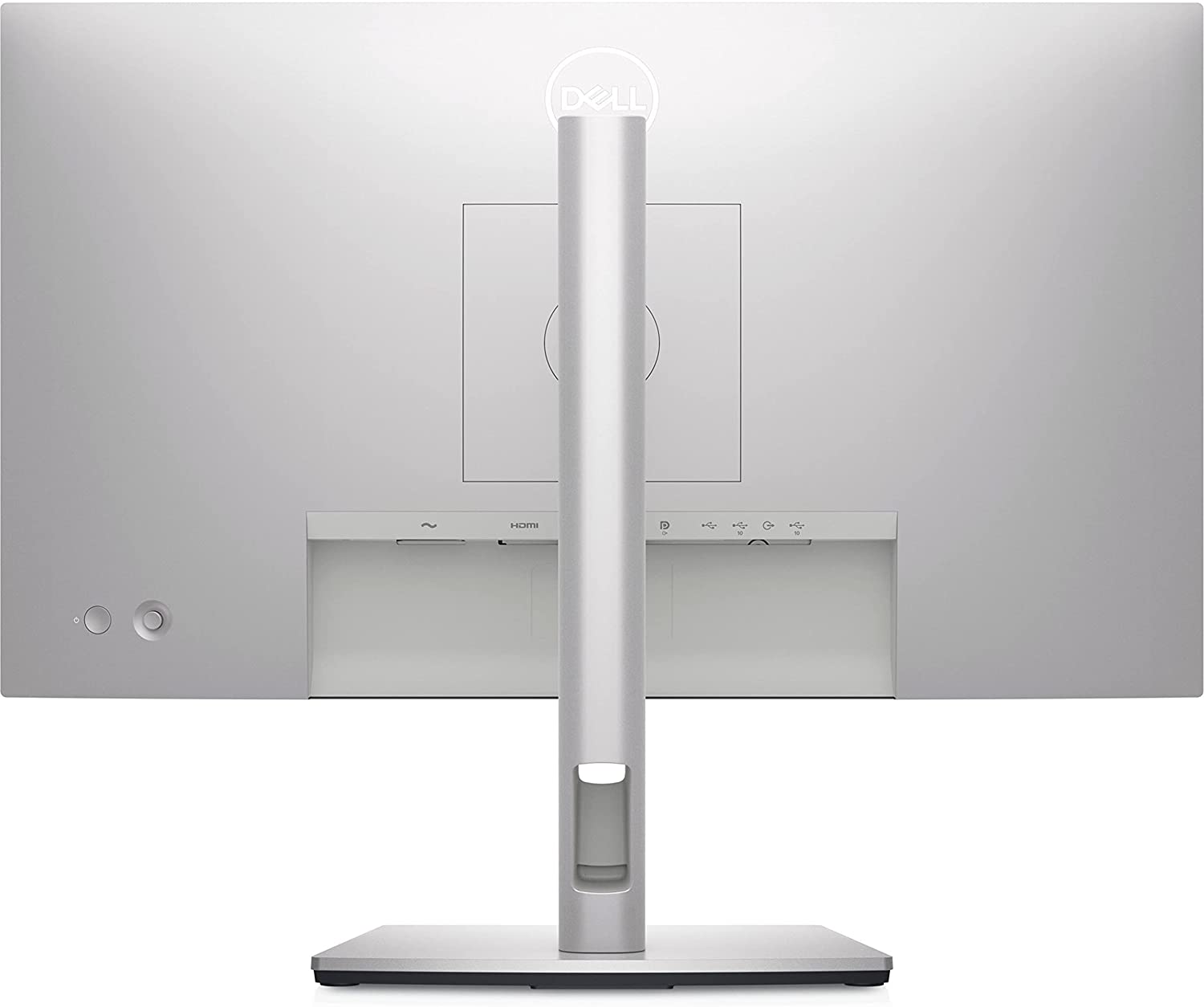 The new UltraSharp monitors such as the Dell U2422H sport a classier and sleeker design than their predecessors. The monitor has a matte silver shell and some bits in matte black, enabling it to fit right into studio setups with high-end workstations. The display is bezel-free on three sides, but you will still see inner borders when it’s in use.

The newer designs also reduced the monitor’s dimensions, enabling it to squeeze into tiny desks while helping save the environment by using fewer materials. The monitor is very light at a little under eight pounds and it doesn’t consume too much depth from your desk. It is great for business users with a multitude of devices for work, plus it also works great for those who move around a lot.

Build quality is superb for the Dell U2422H and you’d instantly know that the brand did not skimp on its design and manufacturing processes. The plastic panels are sturdy so they won’t flex or crack with minimal force. The stand is stable and firm, so the screen won’t shake or sag while you are crunching down the numbers

The Dell U2422H also has a joystick for its features and settings for painless access to adjust something or use one of its features. It’s located at the lower corner on the monitor’s rear, but it is still easily reachable since the device isn’t too big. You also have Dell’s Display Manager on your side which works great for both home and enterprise settings.

The stand included with the Dell U2422H offers tilt, swivel, pivot, and height adjustments so you don’t have to replace it. The base’s footprint was also lessened so your desk doesn’t have to be cramped up. You can use VESA mounts with this model, but it’s only necessary in special cases such as multi-display setups to maximize productivity.

One of the biggest features of the Dell U2422H is its connectivity layout which has plenty of options for daily use. You Get DisplayPort 1.4 and HDMI 1.4 as primary video inputs, along with a DP Out slot for daisy-chaining. It also includes three USB 3.2 slots with superspeed technology, but you do need to connect the monitor’s upstream port to utilize them.

You will also find two USB-C slots on the monitor, one of which is the aforementioned upstream port. The one near the front under the bottom bezel is meant for mobile devices with its data transfer capability and 15 watts of charging power. What’s missing from this model is DP Alt mode and you have to pay more for that and get the HE variant.

It’s also worth noting that the Dell U2422H like most of the 2022 lineup, doesn’t include built-in speakers. It instead has slots with magnets at the bottom bezel designed for the Dell SB521A slim soundbar. We like the design, but we dislike that you have to pay extra for it since the monitor is already quite expensive for an office display.

The Dell U2422H offers a 24-inch IPS panel with a 1920 x 1080 resolution, a 60Hz refresh rate, and a 5ms response time. The backlight has a 250 cd/m2 output while the contrast ratio is still at 1000:1 like most IPS variants. This model doesn’t have special features, but it advertises wide gamut coverage for a vibrant output.

24-inch 1080p monitors are common everywhere, so it isn’t surprising that they are still quite popular and manufactured in droves. That commonality also means that most of us are used to them since they are used in schools and offices a lot.  It is not as crisp as the higher resolution models, but it’s clear and legible enough for extended hours of use.

The Dell U2422H renders 100% sRGB and around 90.6% DCI-P3, making it one of the most vibrant office monitors in the market. Its default accuracy needs improvement due to its 2.76 dE average, but that’s common with wide-gamut panels. The screen looks great for daily use, but it needs a bit of tweaking if you are into editing or content creation.

Calibrating the monitor with the help of a colorimeter improved its dE average to 0.87 which is excellent for a business monitor. This weeds out the imbalance and oversaturation in some shades, making it perfect for editing work. However, colorimeters aren’t cheap, to begin with, so you might end up spending an amount that can get the 1440p or even the 4K variants.

The backlight reached 259 cd/m2, but its contrast wasn’t impressive at 967:1 when the brightness is set to 60%. The screen is incapable of deep blacks, but that’s an expected limitation from the technology. The only alternative to it is getting a VA-based model, but those are usually less accurate when it comes to color consistency.

The Dell U2422H’s panel had some backlight leaks which degraded its appearance when showing all-black images or dark scenes. However, It’s not as noticeable when you are viewing full-color images or soaking up the white backgrounds of office apps and browsers. Take note that this will vary between every monitor due to tolerances and the nature of IPS tech, so there will be better units out there.

It is also understandable that the Dell U2422H doesn’t fair well in fast-paced scenes since it was not meant for gaming use. The screen shows some persistence in fast or contrasting transitions and using it’d Fast overdrive mode did not help. Doing so will induce overshoot, so we advise against using this model for action-packed games if you have sensitive eyes.

The Dell U2422H also doesn’t have Adaptive Sync, so FreeSync and G-Sync with AMD and Nvidia GPUs are out of the question. That’s understandable since this was meant for productivity and it doesn’t take a lot to run 1080p anyway. Input lag sits at 10ms at 60Hz, so it’s still responsive enough for casual gaming purposes.

Thoughts on the Dell U2422H

The Dell U2422H is a great pick if you want a high-quality display for remote work or for your home office. It is one of the few 1080p monitors that can offer wide gamut coverage along with the latest connectivity standards. It’s also well-built and attractive, unlike the usual business monitor that is usually blocky and finished in matte black all over.

However, the significant deal-breaker with the Dell U2422H is its very high price which can buy two regular 1080p monitors. It would be understandable if it had a USB-C slot that supports DP Alt Mode, but you have to pay more for that feature. It works great and looks great, but it is not the most practical choice in the market right now.