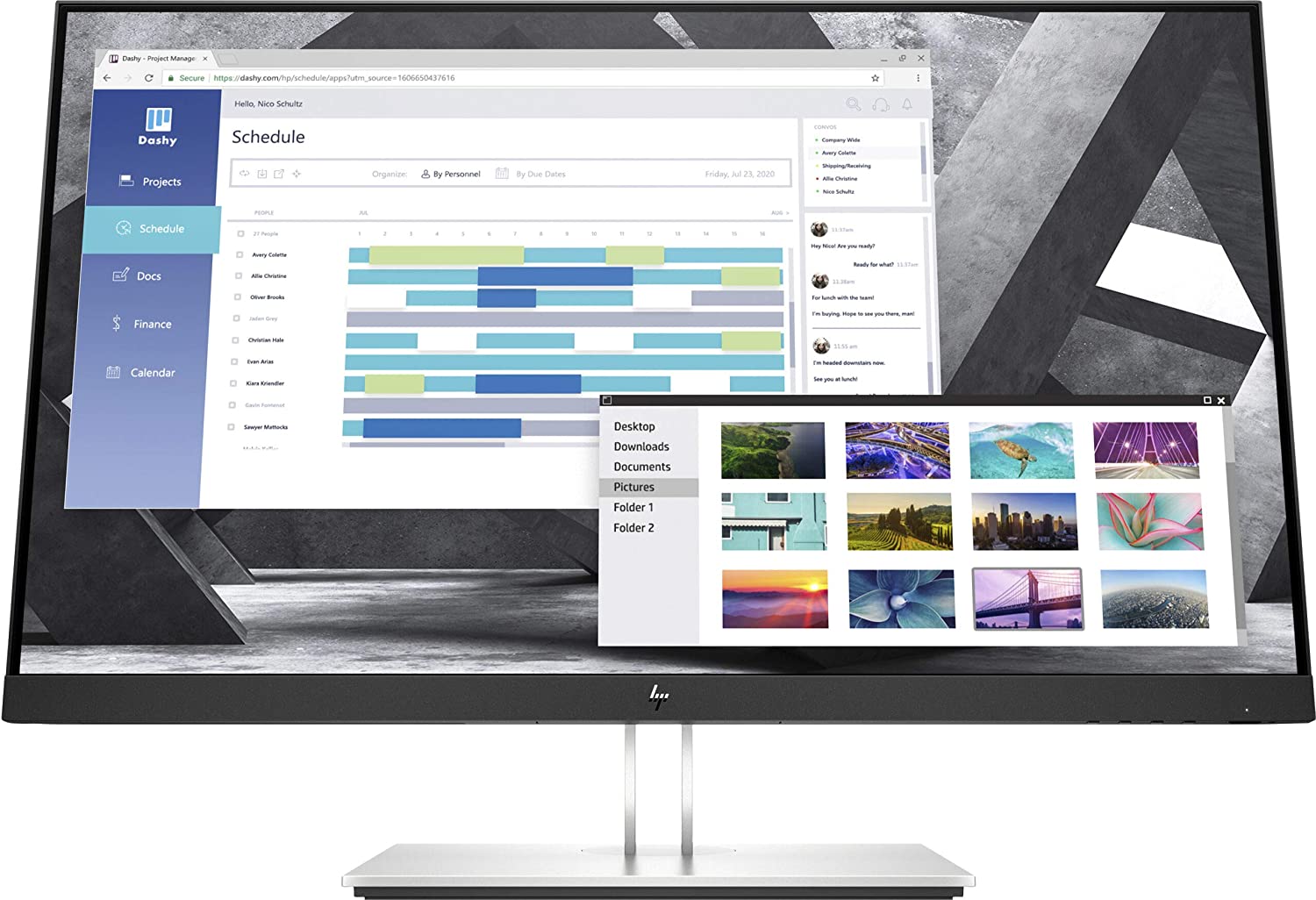 The HP E27Q G4 is designed for enterprise use as well as for work from home users who a robust monitor for the daily grind. This model is the 1440p variant, but it’s also available in 1080p and 4K models to suit your needs. The HP E27Q G4 is the affordable version of the E27D G4, so let’s check out how it compares to its more premium sibling. 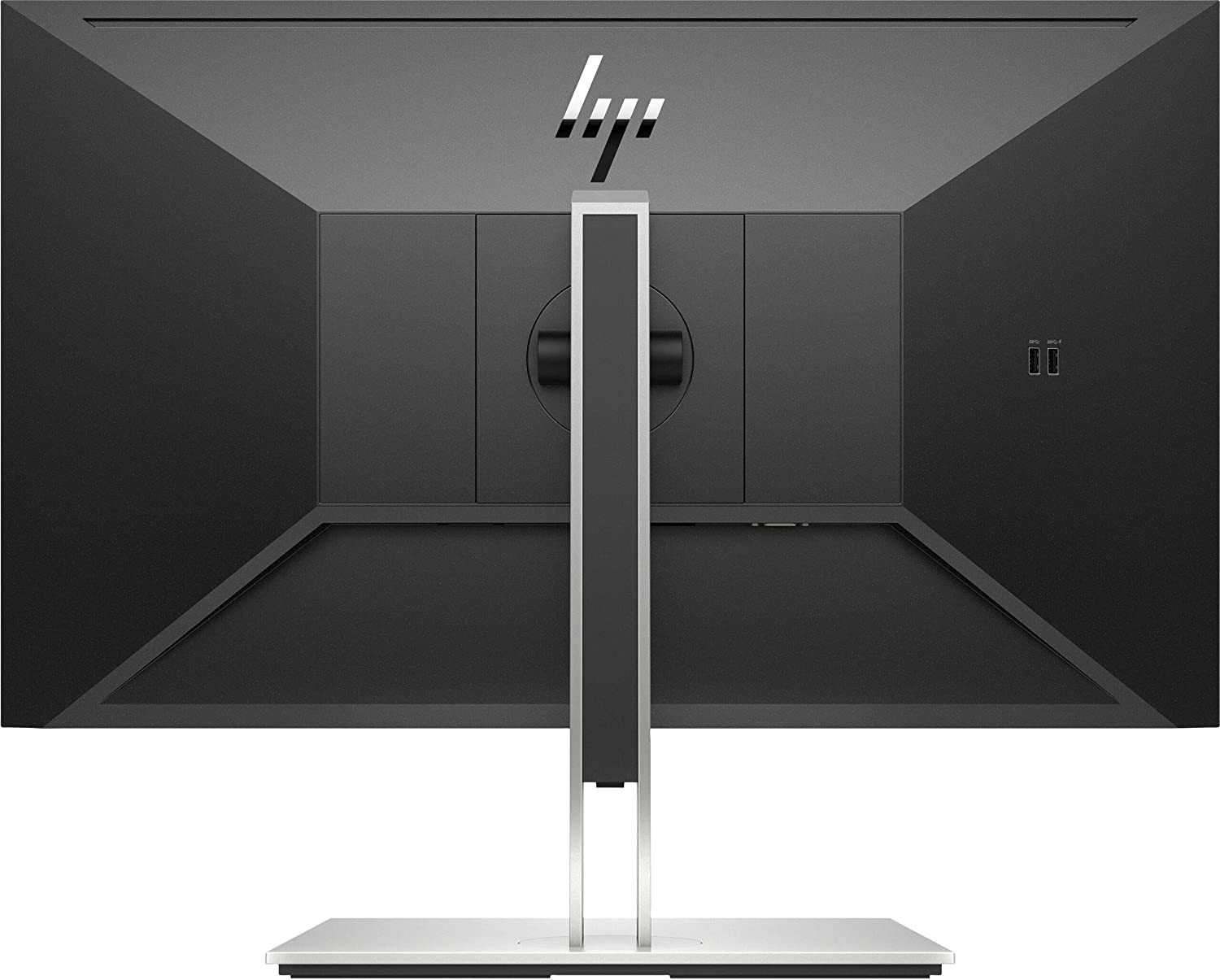 The HP E27Q G4 is a budget model, but it still boasts the premium aesthetic of its G4 siblings that will complement workstations quite well. The device has a matte black housing accented with a gorgeous metallic stand and shiny HP logos. The display is bezel-free on three sides, but you will still see flushed inner borders that aren’t distracting at all. 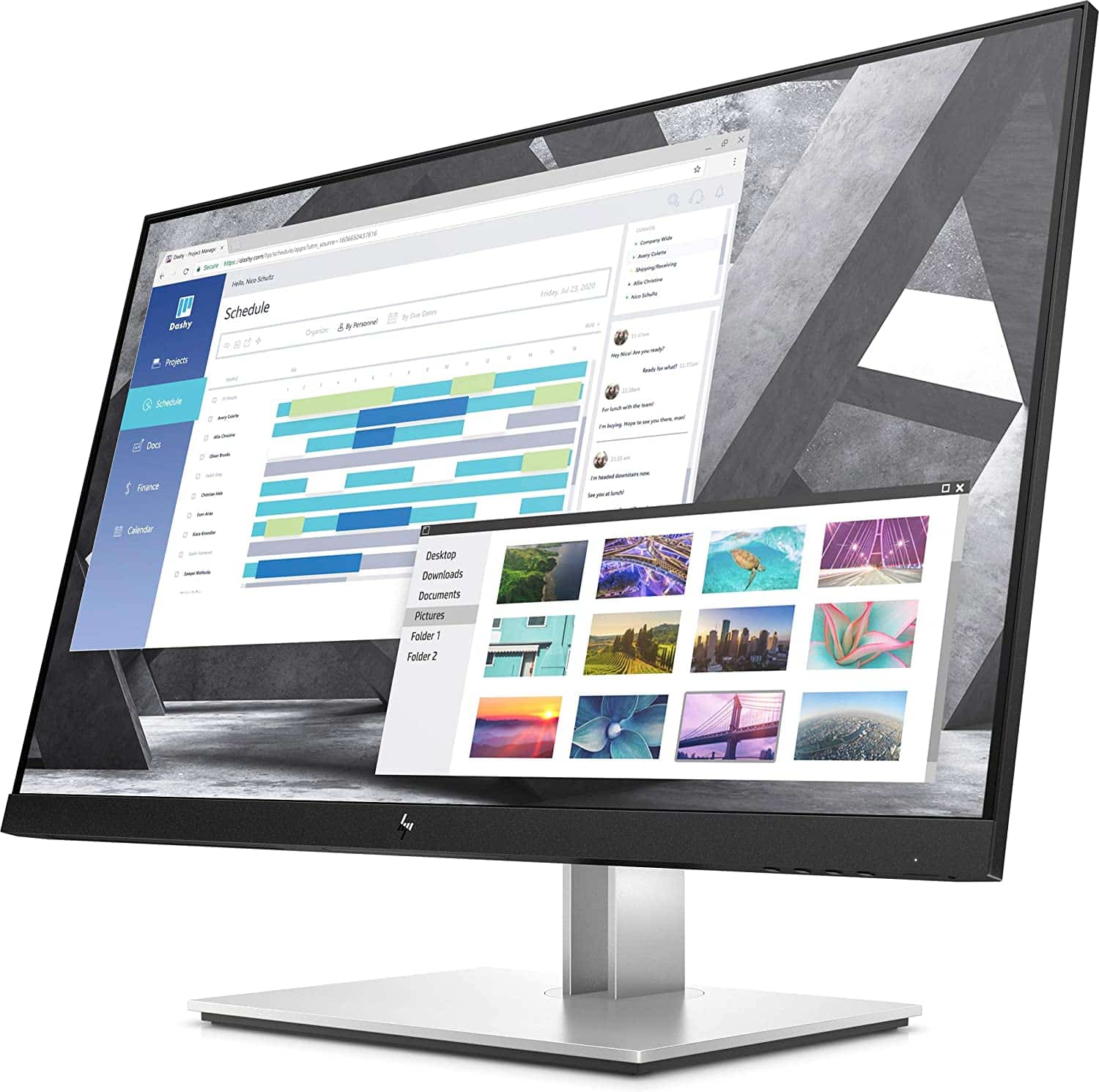 The HP E27Q G4 is surprisingly heavy at 15.43 pounds since many similarly-priced monitors that use more plastic parts weigh closer to 10 pounds. It’s not the biggest monitor we’ve handled, but those with tight work desks might need to re-arrange a few peripherals. Its square base takes up most of that space, but at least it’s flat so you can use it as a pedestal for smaller devices.

Build quality for this model is equally as good as its more expensive variants thanks to its premium materials and craftsmanship. Each panel of the device meets the other perfectly, so there are no gaps or uneven seams on the device. The stand provides excellent stability as well so you won’t have to worry about a shaking screen while furiously crunching down on your tasks.

One thing we dislike about the HP E27Q G4 is its use of rudimentary buttons for the OSD. It’s a bit more time-consuming and confusing at times, unlike joysticks which can give you straight-to-the-point control over navigation in the OSD menus. However, this model is compatible with the HP Display Center app which lets you tweak its settings directly in Windows.

The stand included with the HP E27Q G4 offers tilt, swivel, pivot, and height adjustments for your convenience. It is easy to get a comfortable viewing angle, plus the flexibility allows you to set up two or more of these G4 monitors according to your needs. You can swap this part out with a VESA mount, but that’s only necessary if you have multiple screens or if space is very limited.

The HP E27Q G4 includes a port each for DisplayPort 1.2, HDMI 1.4, and D-Sub for older devices. You also get five USB 3.2 connectors for speedy transfers, although the type-B slot must be connected to your PC for them to function as intended. The upper-tier E27D G4 has more ports such as USB-C slots, but it’s twice as expensive as this model.

It’s also worth noting that the HP E27Q G4 doesn’t have speakers nor does it have a 3.5mm analog port for headphones. That’s fine in most cases since users will connect headsets to the PC’s ports for less fuss anyway. However, a pair of decent speakers would come in handy for the times where you simply just want to listen in on conference calls or collaboration meetings instead of hot headsets.

The HP E27Q G4 sports a 27-inch IPS panel with a 2560 x 1440 resolution, a 60Hz refresh rate, and a 5ms response time. Its backlight is rated at 250 cd/m2, while the contrast is still at 1000:1 like most IPS panels. This model doesn’t offer entertainment chops such as HDR since it’s a business monitor more than anything else.

27-inch 1440p is more comfortable to use for productivity since they offer more space while looking sharper than a standard 1080p screen. the text size gets smaller, but they are still legible enough so scaling won’t be necessary. It will also be easier on your eyes compared to the same size 4K monitors since the PPI isn’t too saturated.

The HP E27Q G4 renders 100% sRGB and around 85% DCI-P3 which is excellent for daily use, including some editing. Its default accuracy is fantastic since the dE average is only at 0.93, so the screen looks balanced right out of the box. Users will be happy with it so only a few tweaks to some settings light brightness will be necessary for comfortable use.

Calibrating the HP E27Q G4 with a colorimeter improved its dE average to 0.72 which is even better. However, untrained eyes will not notice the improvements, so getting an expensive gadget to adjust an already excellent screen isn’t practical. It’s only worth it if you are into editing work, but you should be looking at a higher-tiered and more capable monitor if that’s the case.

The backlight on this monitor only managed 241 cd/m2 at 100% brightness and a contrast ratio of 975:1 at 60%. The screen can’t fight off glare and it cannot produce deep blacks like other monitor types in the market. it should be fine if you use it in a curtained room, but unfortunately, there is nothing you can do about its higher black luminance.

Panel uniformity for the HP E27Q G4 could use some improvements since there were some clouding issues on the edges of the screen. the variances become noticeable in dark or all-black scenes, but it’s not as noticeable in white or full-color backgrounds. Take note that this varies with every unit made due to the nature of the panel technology.

Responsiveness isn’t the best on the HP E27Q G4, but you have to remember that it’s a 60Hz monitor designed for business use. Blurring isn’t as common as most would fear, but some contrasting or fast-paced transitions can leave some minor trails on the screen. This makes the monitor unsuited for fast-paced games, but casual titles should be okay since they are played at a slower pace.

The HP E27Q G4 doesn’t have FreeSync so G-Sync Compatible mode isn’t possible as well. Almost all of the HP business monitors do not have adaptive sync functionality since they are focused on business use. Input lag sits at 10ms at 60Hz so delays won’t be an issue while you are using the monitor.

The HP E27Q G4 is a well-rounded option at its price point since it offers a robust design and a color-accurate IPS panel. We like that it retained the design and functionality of the other more expensive G4 monitors, although some ports like USB-C are missing with this model. However, you have to consider that it’s almost half the price of the E27D which is better equipped with more ports and a webcam.

The biggest weaknesses of the HP E27Q G4 are common with IPS panels, so we can’t punish it with a negative opinion. Its contrast is limited and it’s prone to uniformity issues, but so are many IPS monitors out in the market. It’s a great buy for productivity, and you have to spend considerably more if you want something better.

Search
NEW
POPULAR
You are here: Home / Reviews / HP E27Q G4 Review – Affordable IPSMonitor for Work from Home and Business
This website uses cookies to improve your experience. We'll assume you're ok with this, but you can opt-out if you wish.Accept Read More
Privacy & Cookies Policy
Necessary Always Enabled
Share This