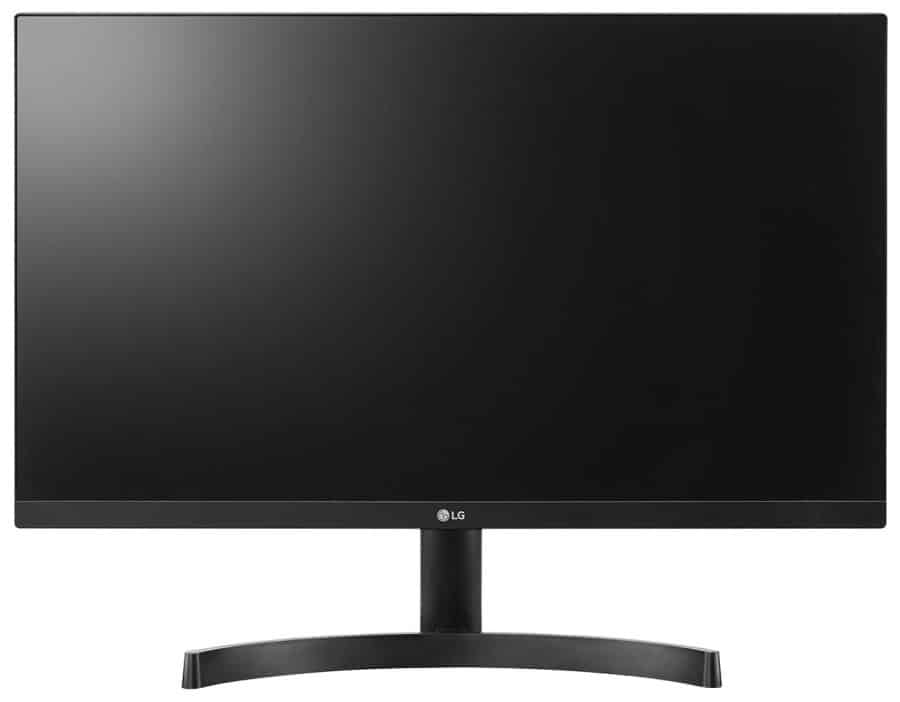 The LG 24MK600 is an attractive IPS monitor for everyday use that includes the brand’s expertise in the panel tech and exquisite design. The Korean tech giant produces some of the best-mixed use displays in recent times, along with with various gaming and designer variants. The LG 24MK600 comes with cheaper variants and is competing with established options like the BenQ GW2480, but does it have an ace up its sleeve? 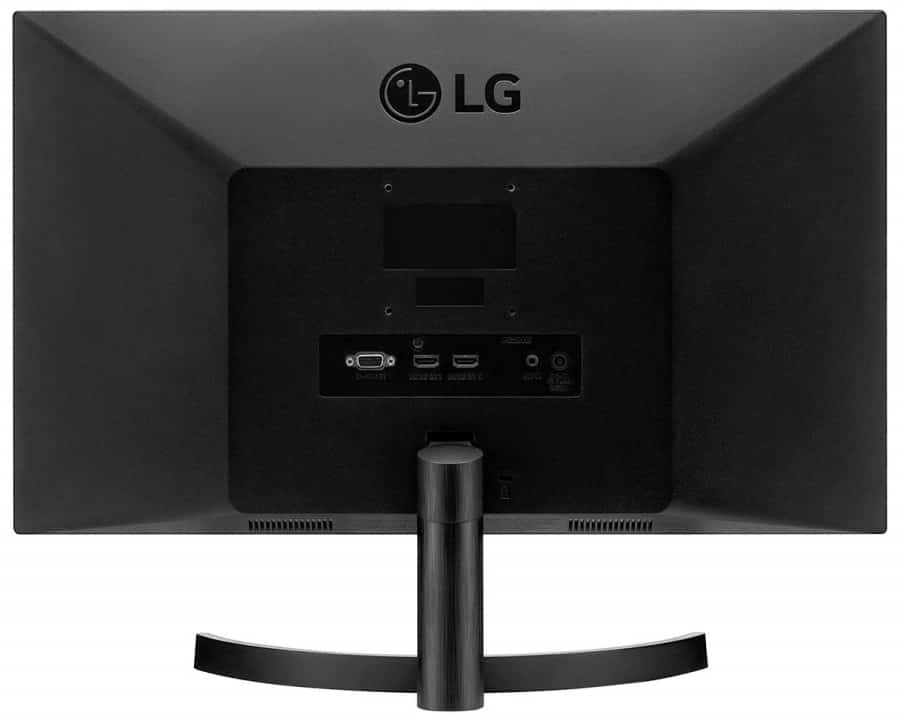 The LG 24MK600 sports a minimalist design that will make it fit in any environment or setup, whether if its at home or the office. The matte black chassis doesn’t get old, although we know many of our readers prefer the white finishes of the higher-tiered variants. The display is bezel-free, making it suitable for multi-monitor setups and directly comparable to the BenQ GW2480.

Build quality for the LG 24MK600 is more than decent, as seen on the material quality and durability of the device. The plastics don’t feel too thin, while there are no manufacturing defects visible on the seams and edges. The monitor wobbles a bit, but it would take a bit of force to make the device shake so you shouldn’t worry about it toppling over.

Physical features are limited on the LG 24MK600, but that’s understandable since this is a budget option where many creature comforts get cut off. However, this model still includes the brand’s OnScreen Control which lets you manipulate the OSD in the desktop instead of using pesky buttons. That characteristic is a huge plus for users who regularly want to optimize the screen for different times of the day.

The LG 24MK600 even includes the ArcLine stand which used to be exclusive to the brand’s upper-tier offerings. The arc-shaped base provides excellent stability, but it takes up a bit of horizontal space on your desk. However, its main weakness is it can only offer tilt for adjustments which will limit your view angle choices considerably.

Thankfully, the included stand is easily removable so you can go with an aftermarket VESA mount which will go on the bolt holes at the rear. But buying an armature adds to the total cost, defeating the budget-friendliness of the LG 24MK600. One way to offset that is to go with two or three of this affordable display product, so you can create a cost-effective work or gaming station with a 5760 x 1080 resolution. 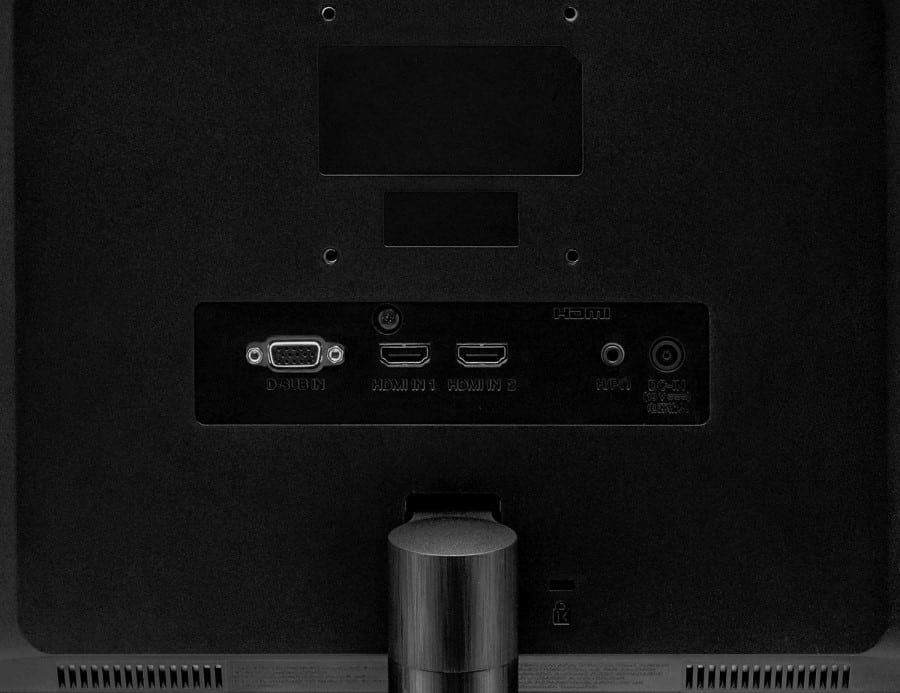 Another limitation on the LG 24MK600 is its I/O panel which only offers dual HDMI 1.4 slots and a VGA connector for video inputs. HDMI is still commonly used today, but modern video cards are starting to turn to DisplayPort as the dominant standard. Recent GPU releases have two or three DP slots with only a single receptacle for HDMI.

There are no extras such as USB slots or speakers with the LG 24MK600 which can somehow, make it a less practical proposition than its main competitors. Regular users won’t be missing these add-ons, but they are nice to have with a display product for better usability and value.

The LG 24MK600 features a 24-inch IPS panel with a 1920 x 1080 resolution, 75 maximum refresh rate, and 5ms response time. Its backlight is limited to 250 cd/m2 while its contrast sits at the typical 1000:1, unlike its Nano IPS siblings in the upper categories. These specs do not offer anything special, but the extra headroom in refresh rate makes the product compelling as a budget display for gaming.

The 24-inch size and 1080p resolution of the LG 24MK600 are perfect for daily use whether if its for work or play. The pixel density in monitors like this is well balanced, so small objects such as text will not need scaling. On the other hand, game graphics are not as detailed as 1440p or 4K, but they look crisp enough without any pixels.

The LG 24MK600 provides 97% of the sRGB gamut, but the oversaturation in the color primaries drops its accuracy to a dismal Delta E 3.9. The blues and reds look like they are over done, while the color temperature is biased towards a cooler hue. The display looks ok for regular use since the whites do not look yellowish, but anything that needs spot-on colors isn’t advisable.

This model could use a bit of calibration, unlike many of LG’s products which are ready to use right out of the box. Gamma is slightly off at 2.1, but it doesn’t add to the pre-existing limitations of the IPS panel. But on a positive note, the LG 24MK600 has one of the best contrast ratios in its bracket, reaching as much as 1250:1 at maximum brightness.

LG mentioned that they pre-calibrated this monitor for improved color rendering, but we think they overdid trying to make it more vibrant. The screen is great for watching anime or playing colorful games like Apex Legends, but it isn’t ideal for editing work or design.

Panel uniformity on the LG 24MK600 is decent and backlight bleeding is very minimal, so there are no immediately noticeable clouding issues. However, the lower part of the screen is noticeably dimmer than the rest, so the contrast in those areas is affected as well. Color rendering remained balanced overall, making the inaccurate representations a much bigger issue in our opinion.

The LG 24MK600 is surprisingly more responsive than some budget IPS monitors we’ve tested even if LG quotes a higher 5ms minimum pixel response time. The screen blurs in some fast-paced sequences, but its not at a very disturbing level. You can also use the monitor’s overdrive feature but stay within the middle settings since its maximum will induce massive overshoot.

The LG 24MK600 is a FreeSync gaming monitor with a functional range of 48 Hz to 75 Hz for buttery smooth play. This model isn’t tested or certified to be G-Sync compatible, so some issues like flickering could arise. Input lag sits at 9ms, so there will be no delays or “de-synced” instances while you enjoy your favorite title.

The LG 24MK600 includes excellent design and clarity despite being very affordable, but its default image profile could use some improvements. The oversaturation could work for users who like to enjoy animated features or cartoony titles like Overwatch, but meticulous users will have to look elsewhere. We also like the addition of FreeSync and the extra refresh headroom on the panel which enables this product to be a good value option for gaming.

The saying you get what you pay for holds true for the LG 24MK600 if you weigh how well-equipped and designed it is versus its imaging performance. Budget monitors have to take a hit somewhere to meet price targets, and sadly, the color fidelity takes one for the team in this variant.

Search
NEW
POPULAR
You are here: Home / Reviews / LG 24MK600 Review – Affordable 75Hz IPS Monitor for Home and Office Use
This website uses cookies to improve your experience. We'll assume you're ok with this, but you can opt-out if you wish.Accept Read More
Privacy & Cookies Policy
Necessary Always Enabled
Share This