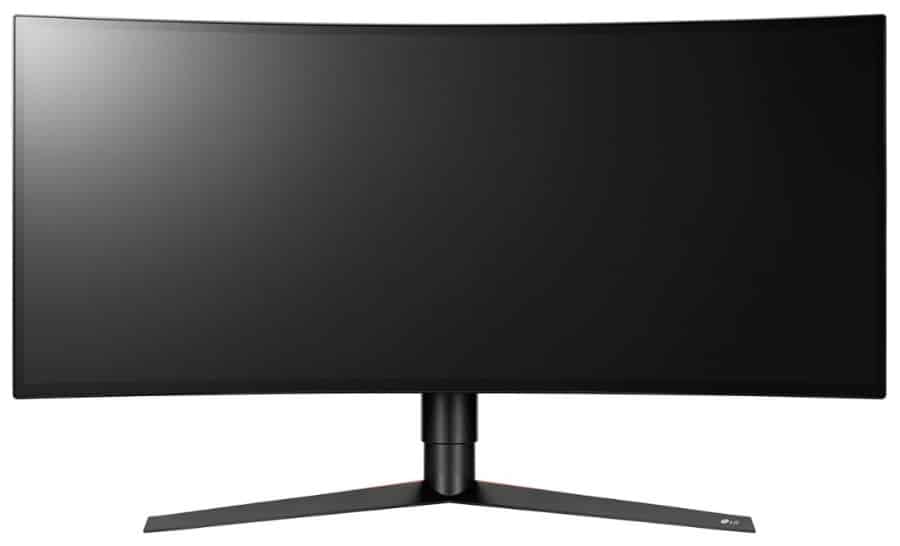 The LG 34GK950F is one of the first few ultrawide monitors to offer a 144Hz refresh rate matched to its 3440 x 1440 resolution. We’ve seen massive demand for a 21:9 gaming monitor with a QHD panel that can go faster than the current 120Hz offerings such as the Acer X34P or the Alienware AW3418HW. The LG34GK950F promises to outclass its competition with the use of the brand’s Nano IPS technology which makes it worth more than a peek. 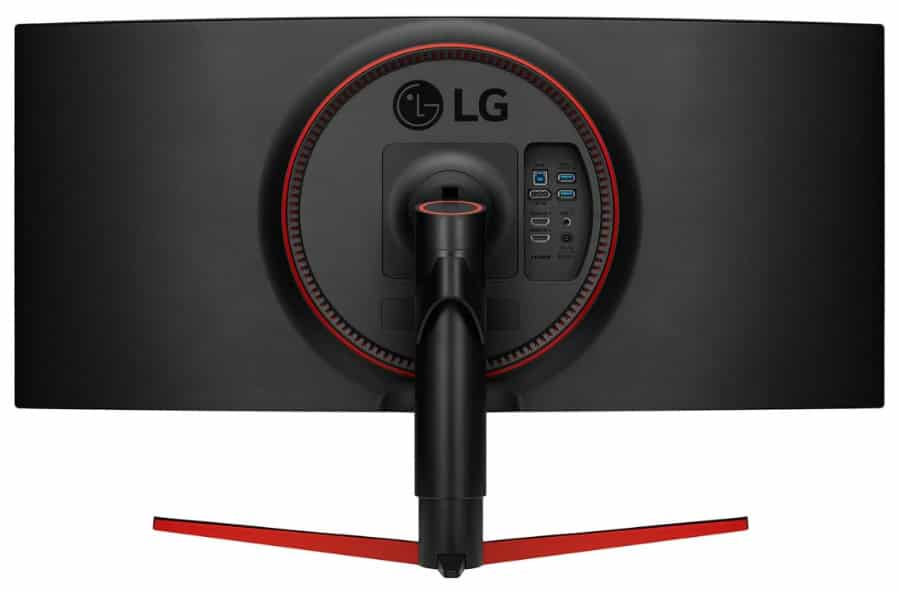 The LG 34GK950F follows the positively accepted aesthetics of the LG 27GK750F and the 32GK850G which is composed of a super sleek, matte black exterior with red accents. The face sports a four-side frameless design which is more accurately a dual-stage implementation composed of a hard outer and thin inner layer. The OSD joystick will be located under the bottom strip at dead-center, so users don’t have to reach the monitor’s nether regions for tweaking.

The LG 34GK950F has slim features which leaves its overall screen size as the only imposing physical aspect. The device once assembled looks thick from the sides, but it’s actually the screen’s curvature which applies the optical trick. Even the base’s legs are composed of slender feet so as to have a smaller footprint on a desk despite its reach.

The rear of chassis for the LG 34GK950F sports a large circular feature that includes air vents and a glossy red ring for full gaming effect. On the G-Sync variants, this add-on is called Sphere Lighting since there are several RGB LED bulbs embedded in the slots. Unfortunately, this model doesn’t get the festive lighting due to it being a more affordable or lower-tiered option.

But we love the LG 34GK950F’s build quality which feels that no expense was spared in building the product. The plastics used feel robust and thick, while the product has a nice weight to it. The adjustments are refined despite a slight wobble, while there are no creaking or buzzing sounds coming from the product.

Since the LG 34GK950F does not have connectivity restrictions since it is a FreeSync display. The horizontal-facing I/O panel includes DisplayPort 1.4 for HDR video signals and dual HDMI 2.0 slots as secondaries. There is also a dual USB 3.0 hub in the layout for your accessories, but there are no speakers fitted into the features.

Despite its svelte figure, the LG 34GK950F is still a massive display that needs a durable and fully-functional stand. The set included with the monitor sports a penguin feet-styled base with red accents and a telescopic upright that offers height, tilt, and swivel adjustments. You can entirely remove this part of the product in favor of VESA mounts, but we think there is little reason to do so.

The LG 34GK950F sports a 34-inch Nano IPS panel with a 3440 x 1440 resolution, 144Hz native refresh rate, and 5ms response time. Notably, the expected slower pixel transitions of IPS panel can be boosted since this offering will include a 1ms MPRT overdrive feature. The product manages to get HDR400 certification thanks to its 400cd/m2 backlight and 1000:1 ratio.

The IPS screen on this model includes a light-matte AG coating which LG says should not add a grainy or detrimental effect to the vibrancy. It’s also important to note that the LG 34GK950F sports a slightly gentler 1900r curve which should help to avoid distortion without sacrificing the immersive effects for the user.

The term Nano IPS were coined for LG’s KSF phosphor-treated WLED panel which can achieve 98% DCI-P3. That volume translates to a massive 135% coverage of the sRGB color gamut which is supremely vibrant and saturated, making it perfect for HDR. The panel used also supports 10-bit color via FRC which improves the monitor’s capability of producing HDR imagery.

Tests with a colorimeter reveal that the LG 34GK950F is indeed capable of vibrant colors due to a sRGB coverage of 132% or around 97% DCI-P3. The results are closely aligned with the brand’s claim for HDR-ready performance. This capability results in a screen with punchy tones and shades which makes it perfect for immersive gaming, and some extent of design work.

However, despite the excellent output, the LG 34GK950F’s default accuracy averages at 2.9. It’s a decent score, but it isn’t what you would expect from this model which has received factory calibration with a certificate of assurance to match. You can switch to the included sRGB mode to tighten the score to DE 1.3 at the cost of the extra vibrancy and a few adjustments.

You can also go with a colorimeter like the DataColor Spyder Elite to push the LG 34GK950F to a DE of only 0.3. This result is one of the best we have seen, but it’s up to you if the extra cost of the gadget is worth it. Using a colorimeter will make the screen look more balanced, without sacrificing vibrancy.

Another excellent characteristic of the LG 34GK950F is it’s Gamma which sat perfectly at 2.2 through the testing. Contrast is decent at the default average of 950:1, but colorimeter treatment will push it further to 1020:1 to improve the output. Couple the excellent colors with deep, inky blacks and you get an instant winner in the imaging department.

One of the limitations of the LG 34GK950F is its backlight which is great for SDR content, but insufficient for HDR media. The backlight unit can only go up to 395cd/m2 which falls a bit short of the HDR400 standard. However, this aspect of the monitor is pointless except as another setting to test and play with to check if your game will look better.

There are slight improvements in the visual qualities of HDR-compatible games like Battlefield V, but its still hit or miss. HDR400 is sorely lacking the oomph of products like the Philips 436M6VBPAB or the Asus PG27UQ. There are added effects, but the extra depth and improvements in lighting effects are not comparable.

The test unit of the LG 34GK950F fared quite well in the uniformity department since there are no noticeable variances. Colors across the quadrants cloesly track the D65 standard while differences in the brightness of the screen stayed with 10%. We noticed a bit of bleeding on the corners of the panel when a black image is presented, but it should not affect the general part of usage.

The LG 34GK950F can go up to 144Hz natively which is a big step in responsive gaming for the ultrawide category. But during testing with FPS titles like PUBG and BFV, there still is a bit of noticeable ghosting during swipes or fast scenes. Thankfully, the device includes an overdrive feature which works best when set to its Faster level.

The product even has a Motion Blur Reduction feature, aka Backlight strobing. However, we did not feel the need to use this feature since the panel already handles motion excellently. You also don’t have to deal with a dimmer backlight if you leave this setting off.

The screen will look snappy with almost no image retention and blurs if you select this setting. We’re also quite surprised that maxing out the booster does not induce overshoot since it’s rare for most implementations. The LG 34GK950F is great for competitive FPS gaming despite the categorical stigma of suitability for immersive titles.

Of course, input lag is also a huge factor for that kind of usage to help avoid delays and “de-synced” instances. The LG 34GK950F isn’t as fast as ultrawides like the Alienware AW3418DW due to its 10ms input lag, putting it at the middle of the high-end ultrawide category. But you have to consider that most users fail to notice issues even if a monitor clocks slower.

Finally, the LG 34GK950F is FreeSync 2 compatible for buttery-smooth gaming in HDR. The variable refresh range goes from 55Hz to 144Hz which is a bit short of what we expected, but is sufficient for most situations. Take note that you need a powerful AMD GPU like a Vega 64 to run this display optimally.

The LG 34GK950F is a fantastic and interesting gaming monitor due to its superb Nano-IPS panel. The post calibrated color coverage and accuracy is fantastic, while the screen’s gamma and contrast take care of the depth. The default setting is a bit off, but it still is reasonable if you use this product exclusively for gaming.

We love the LG 34GK950F, but there are minor quirks like the slightly wobbly stand and the higher input lag. Don’t get us wrong because the product is highly recommended, so most users will fail to notice these complaints during gaming sessions. Overall, the LG 34GK950F is a unique and fantastic monitor that’s worthy of your hard-earned cash.