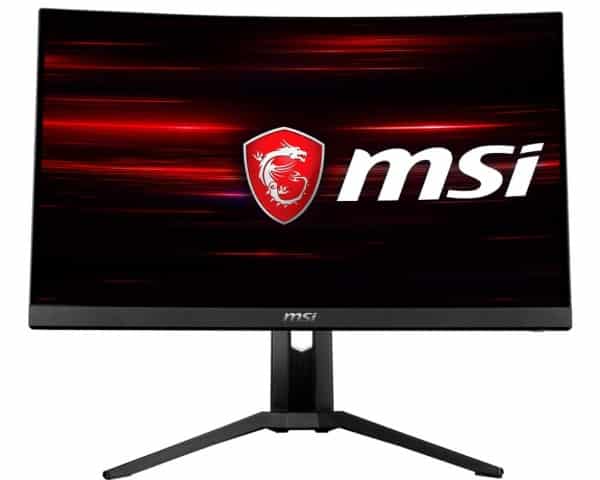 The MSI MAG241CR combines game-grade capabilities with a curved display for a cinematic visual experience while you fight your battles. This model comes in a very familiar 144Hz 1080p format, which makes it perfect for competitive use without hurting your pocket. MSI has revised the 24-inch 144Hz line quite a lot already, so let’s check out if the MSI MAG241C is one of their best ever. 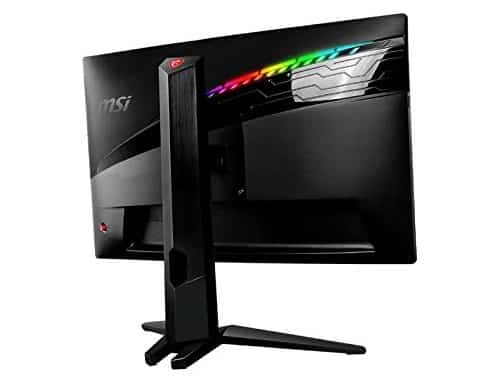 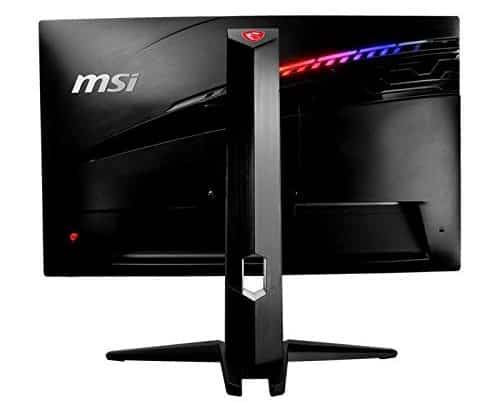 The MSI MAG241CR sports a gamer-centric signature design that matches the brand’s gaming laptop aesthetics that is just right. The brushed matte black gives the monitor a classy look, while the dash of RGB and the red dragon logos take care of the gaming character. The display is bezel-free on three sides, but you will still see panel borders when the device is in use.

Build quality for the MSI MAG241CR has certainly improved compared to previous iterations. There is little to no wobble on the device, while every seam and corner match perfectly with their counterparts. The mechanism on the monitor feels smooth but firm enough to keep the angle you set and not sag down.

It’s also fantastic that you don’t have to deal with clunky buttons to adjust the OSD since the MSI MAG241CR already has a joystick at the rear. Its position at the lower corner means you don’t have to extend your reach every time you need to tweak something. It’s also easier to master compared to a multi-button layout, especially if you use your PC in the dark.

The front of the MSI MAG241CR looks clean and minimalist, but its back carries the signature gamin aesthetic these offerings are all about. The asymmetric dash on the rear includes an RGB LED strip that works with MSI’s Mystic Light app which allows you to set colors or sync it to audio. The glow is bright enough to add an ambient effect on your desk while also helping with eye comfort as a bias light.

Most of the brand’s gaming monitors had very limited adjustments, but the MSI MAG241CR now includes height adjustments with the tilt mechanism. You’d have to buy a VESA mount with a 100 x 100 pattern if you want more flexibility, but that isn’t necessary since the monitor is curved. The shape will make the display look weird if you view it from an off-angle or in portrait mode.

The MSI MAG241CR has a bevy of connectivity options which will satisfy your needs for daily use. The video inputs include DisplayPort 1.2, dual HDMI 1.4, and DVI-DL which effectively covers your gaming PC and up to two gaming consoles. There is also a trio of USB 2.0 connectors for accessories which are convenient for cable management purposes.

The MSI MAG241CR doesn’t have speakers, but it does have a 3.5mm jack for audio pass-through. Those won’t be missed because gamers would rely on headsets for better clarity and focus anyway. MSI even covered that with a pop-out headset stand which lets you stow your cans so they don’t clutter up your desk.

The MSI MAG241CR utilizes a 24-inch curved VA panel with a 1920 x 1080 resolution, 144Hz refresh rate, and boostable to 1ms response time. Contrast ratio is specified at 3000:1, while the display’s backlight tops out at 300 cd/m2. The screen’s 1500r curve aims for immersion, but it’s less perceivable in smaller monitors like this model.

1080p fits perfectly in 24-inch displays, and many think that its the absolute limit for the resolution. The 91PPI gives a reasonable amount of detail with minimal image softening, but it doesn’t shrink text or other small objects to the point of needing scaling. 1920 x 1080 is also very doable for a wider range of GPUs, so higher framerates are attainable for many users.

The MSI MAG241CR is extra vibrant thanks to its VA panel’s characteristics, but it could use some improvements in accuracy. The display renders a little above 100% of the sRGB gamut volume, but accuracy is dismal at DE 3.5. The extra punch in color is suitable for cartoony titles like Overwatch or Apex Legends, but you will see oversaturation in many instances.

The color temperature is also way off-balance and above the 6500K point, so the screen can look like it has a very light bluish tint at times. We know many won’t mind since gamers don’t usually like the warmth of sRGB screens. Gamma is also slightly off at 2.3 which adds to the extra saturation, but that is a minor issue compared to the others.

What’s fantastic about the MSI MAG241CR is its contrast ratio which exceeds its rating at around 3100:1. Blacks are deep and convincing, while the separation between shades is well-defined and readily visible. We recommend staying at around 40% brightness to maximize these capabilities and to lessen the appearance of the flaws mentioned above.

Panel uniformity is decent for the MSI MAG241CR since color deviations are within acceptable limits. The backlight spread has a 12% variance, but most of it is concentrated on the edges of the display due to its curved shape. This affects the contrast in those areas, showing a certain level of clouding in dark or all-black images.

The color performance of the MSI MAG241CR isn’t as big of a drawback for gaming compared to pixel responsiveness. The VA panel in this model still shows a bit of smudging in certain conditions such as when you pan the screen too fast. Unfortunately, you have to live with the minor persistence since the overdrive feature and all of its levels induce the same amount of overshoot.

The MSI MAG241CR is a FreeSync gaming monitor with a 48Hz to 144Hz effective range making it a perfect pair for the latest Radeon Navi GPUs. This model is also tested to be G-Sync compatible, so Nvidia users don’t need to worry about tearing as well. Input lag averages at 10ms at 60Hz, so there should be no delays or “de-synced” instances while gaming.

Thoughts on the MSI MAG241CR

The MSI MAG241CR is a well-designed gaming monitor for users who want a vibrant screen with a high refresh rate. However, its image quality needs a ton of improvement, and not a lot has access to a colorimeter which is necessary for toning down the flaws. Latency is very low, but the VA panel’s pixel responsiveness requires a better overdrive implementation to help clean the overall image.

The curved screen makes the MSI MAG241CR more attractive, but its more of a gimmick at this size since the immersive effects are limited. The MSI MAG241CR slots into the more affordable category in the current market, but its limitations will make the deal hunters look elsewhere.