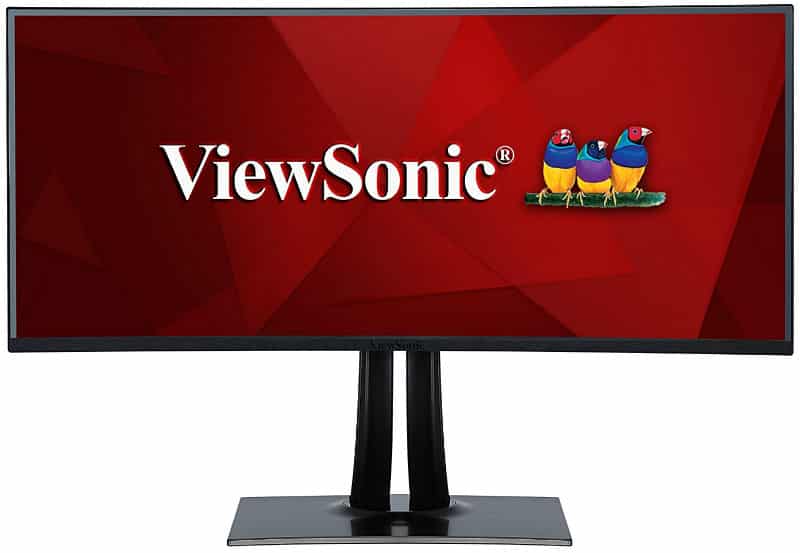 The ViewSonic VP3881 offers a stunning, 38-inch IPS screen that comes with factory and hardware calibration for color critical work. This device is the largest display in the brand’s VP line of professional displays which offer amazing performance and value. There aren’t many competitors in the 38-inch space, but it’s interesting to see how the ViewSonic VP3881 stacks up against its established counterparts. 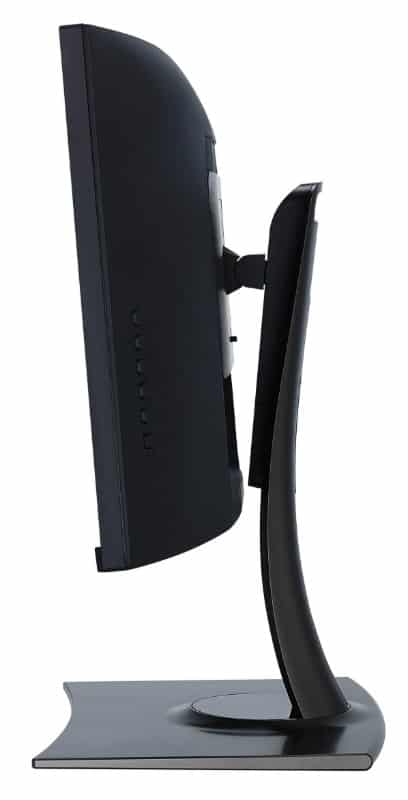 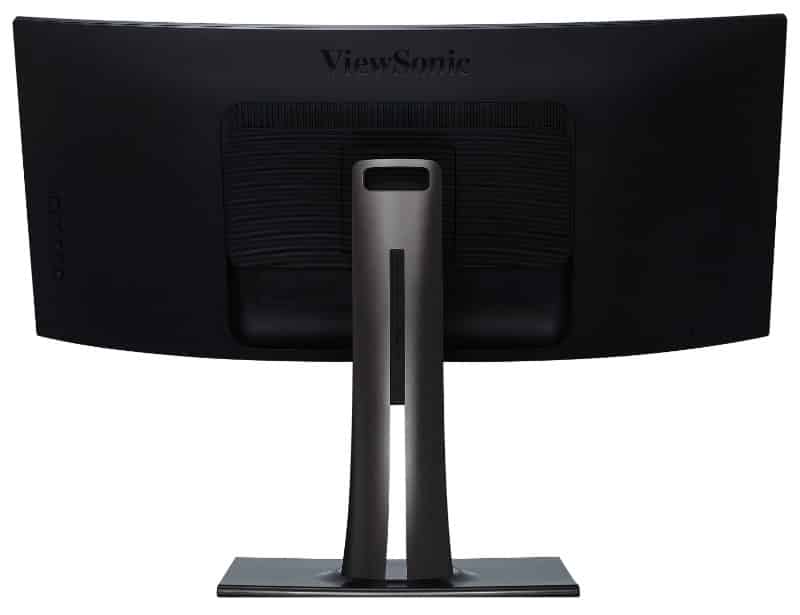 The ViewSonic VP3881 dons a fairly simple and sleek design with matte black finishes along with some classy charcoal gray accents on the base and stand. The monitor is, of course, imposing due to its size, plus you will need a wide desk to accommodate the display and your PC. The monitor’s front is mostly borderless thanks to a three-side dual-stage design.

This model isn’t as sleek-looking as the HP Z38c, but looks are the least important aspect of monitors like the ViewSonic VP3881. The monitor would fit into any setting or home decor without being overbearing, suiting a wide audience among our readers.

The ViewSonic VP3881 is a massive monitor so the brand included a pretty meaty stand with all the right features. The rectangle base provides a lot of stability to the monitor, while the curving upright provides excellent ergonomics. You can tilt, swivel, and adjust height, so getting a perfect angle of the curved screen is as easy as peas. 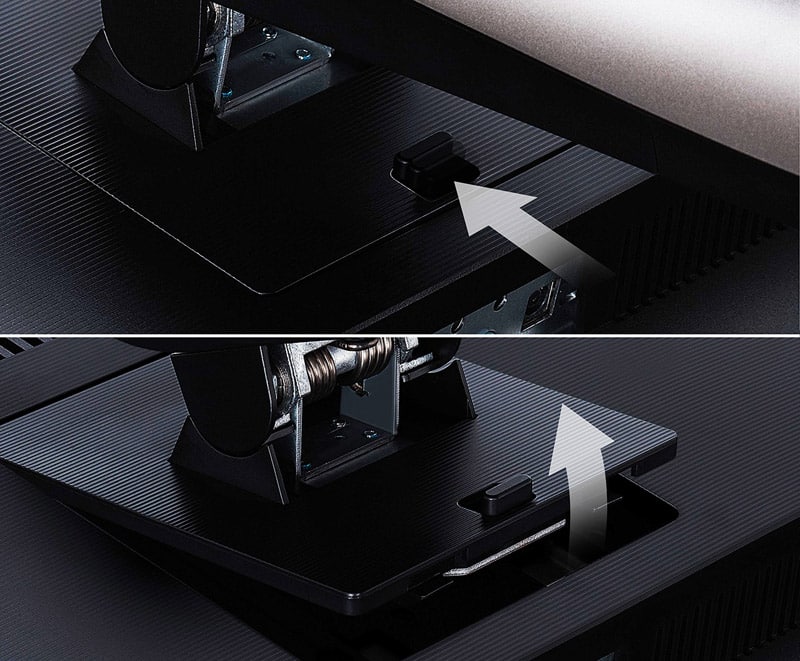 VESA compatibility is also a part of the spec list for the ViewSonic VP3881, allowing users to choose an aftermarket mount if they desire. The mechanism has a quick release feature, making it very convenient to assemble or disassemble the device. To top it off, there is also a carry handle at the tip of the upright which is actually a welcome feature since the monitor is as heavy as they come.

Connectivity-wise, you won’t get disappointed with the ViewSonic VP3881 since it includes the latest ports you will ever need. The down-firing I/O layout includes DisplayPort 1.2 and dual HDMI 2.0 slots for video inputs. There is also a USB-C slot for the latest MacBooks and Windows laptops, along with three USB 3.0 slots for accessories.

Finally, the ViewSonic VP3881 comes equipped with a pair of 5-Watt speakers for basic audio appreciation while working. The built-ins are powerful enough for near-field listening and notifications, however, we still recommend headphones or a separate set for movies and games.

The ViewSonic VP3881 boasts a 38-Inch IPS panel with a 3840 x 1600 resolution, 60Hz refresh rate, and 7ms response time. A 300cd/m2 backlight and 1000:1 contrast ratio which is expected from IPS technology is also listed in the spec sheet. The monitor’s capabilities suggest it is aimed at professionals who create and edit content more than entertainment or gaming.

One of the key highlights of the ViewSonic VP3881 is its factory-calibrated screen with an 8-Bit+FRC interface and a 14-bit LUT table. Out of the box, the screen can put out 100% of the sRGB color space with a fantastic accuracy score of Delta E 1.5. Gamma sits at exactly 2.2 while contrast is already at 980:1, meaning users can set up and use the monitor right away.

The ViewSonic VP3881 is hardware calibration-compatible if in case you want to have perfect color quality and fidelity. The LG IPS panel can be pushed to an accuracy of only DeltaE 0.5 with a slightly improved contrast ratio of up to 1100:1. There is little reason to apply this procedure, but purists will like the absolute imaging performance of the device.

We do find it strange that the ViewSonic VP3881 is listed as an HDR10-compatible monitor since it does not carry any related features or emulation modes for the standard. The display doesn’t have the necessary specifications such as local dimming or DCI-P3 coverage. If you want an HDR ultrawide monitor, you might have to wait for the next wave of premium models from the top manufacturers.

The screen is quite big, so it could be prone to bleeding or uniformity issues which vary from unit to unit. The ViewSonic VP3881 does include a Uniformity Correction feature to help with these flaws, however, it will drop contrast to as low as 450:1. We recommend leaving this feature off in both default and calibrated states to avoid degradation.

Panel uniformity is close to excellent on our test model since we did not record or notice any deviances that exceeded 15%. Even if the screen is curved, there are no hugely detrimental lighting bleeds on the corners. If you view the display from an angle, there is a slight pale hint of BLB, however, when viewing the screen the issue becomes next to nonexistent.

The ViewSonic VP3881’s pixel response time is rated at 14ms by default and 7ms when the Overdrive feature is activated. The utility has three levels which include Standard, Advanced, and Ultra Fast modes. The monitor is prone to ghosting in fast-paced motion, but we recommend leaving the overdrive at the Advanced setting since Ultra Fast will induce overshoot.

The ViewSonic VP3881 is an excellent specimen for gaming, although it doesn’t come with features such as FreeSync or low input lag modes. However, the ViewSonic VP3881 is surprisingly fast, clocking in with an average input lag time of only 10ms. It’s interesting to note that the closest competitors usually clock in at 20ms or even 30ms.

Thoughts on the ViewSonic VP3881

The ViewSonic VP3881 is one of the best iterations of the 24:10 – 38-Inch monitors we’ve tested to date. The out of the box imaging and color quality is brilliant, making this monitor the top choice for those without colorimeters or calibrators. Despite lacking a pedigree in gaming, the monitor did shine when it came to responsiveness, besting other variants in its class.

However, we think that what the ViewSonic VP3881 severely lacks is support for wider gamuts such as Adobe RGB or DCI-P3. The monitor’s listing suggests that it is an HDR10-compatible display, but sadly, it doesn’t have the necessary tools. At this price, we expected more, although we cannot argue with the VP3881’s excellent raw performance when you first turn it on.